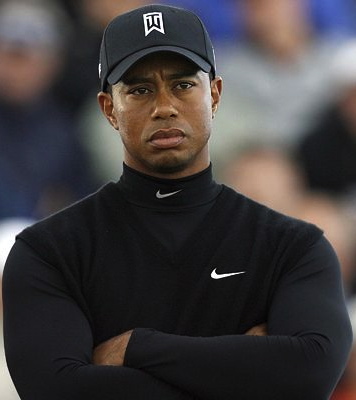 Golf is supposed to be fun.

Even for the highest level professionals, it is still supposed to be fun.

The biggest enemy of a golfer and his scorecard is not the wrong equipment, horrible swing flaws, slow play or even your kids jumping off the top turnbuckle of the couch and doing a cannonball into your lap (Yes, this happens to me on a daily basis. The game is called “beat up daddy” and my 3- and 4-year-olds love it more than ice cream).

The biggest enemy of the golfer is being ridiculous in his or her expectations. That leads to course management problems that ruin the enjoyment of the game. It’s ok for golfers to have long-term expectations that are as high as they want, but short-term expectations, as in the very next shot, need to be more mundane at every level.

I have a good friend who is a 5 handicap. Smart guy — he went to an Ivy League law school. I once added up his cumulative expectations for every shot and he literally would have shot in the 50s had he lived up to his ridiculous standards.

He’s not alone. Golfers have a warped perception of what level of golf shots produce what scores. All you have to do is check out the PGA Tour stats.

It is safe to say that the average 0 to 15 handicap golfer is worse than the worst player on the Tour by a margin so wide it cannot be measured. The best average approach shot from the fairway to the green is 32 feet, 3 inches. Yes, you read that correctly. As I write this article, the guy on Tour who averages the closest to the pin from the fairway (shots from rough not included) is more than 32 feet. The worst on the Tour is 43 feet, 6 inches. 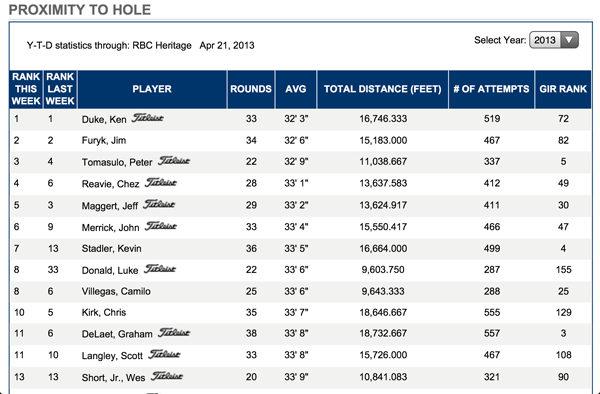 That means the average approach shot to the green on the Tour is between 31 and 47 feet. Why then do I hear the constant moans and groans when shots are not stoned dead?

The devil’s advocate would say, “Well, Monte, there are a lot of long approaches to the green, as there are 500-yard par 4s and pros go for the green from as long as 300 yards and those numbers are factored in.” 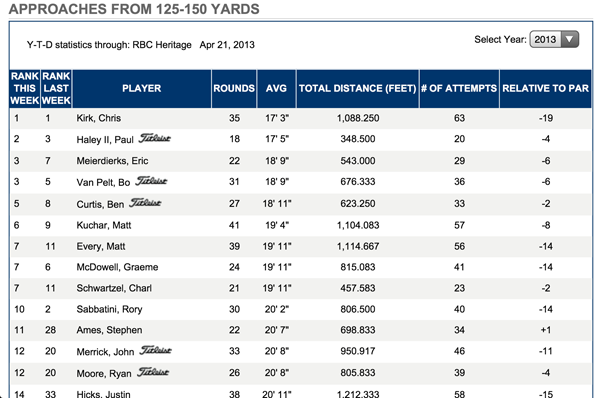 So let’s look at this realistically. If the worst guy on the Tour is 36-plus feet from the hole, the run of the mill scratch golfer should be more than satisfied with that distance. And the 5 to 15 handicap should be doing cartwheels. But we all know that’s not the case.

I play with 15-handicaps who are ready to drive their cart into the nearest lake if they so much as hit the ball outside 30 feet on a shot of that length. Exaggeration? Maybe, but not much. Remember, these are stats from the fairway, not the rough, trees or someone’s patio.

Let’s work in even further. From the fairway, there are only 35 players who are currently averaging under 10 feet from the hole on shots of 50 to 75 yards, and many average over 30 feet. It’s a small sample size at this point on the season, but it is still telling.

These stats tell us one thing: We mere mortals should be happy just to hit the ball on the green, which leads me to the next faux pas I see. A solid single digit has a 100-yard shot to a tucked right pin and is taking dead aim. He shoves it 15 feet and short sides himself.

If I had a nickel for every time I heard that.

My response is he just hit a great shot and has a 15-foot putt from the fringe, or simple chip that is very make-able. The response is still being incredulous about missing the green because it is a blackmark on the stat sheet. So I do this. I drop five balls and offer them $20 to hit all five balls on the green anywhere. The result is often all five balls on the green between 10 and 50 feet with an average around 40. Basically, not much worse than the average shot of a low-end Tour player.

I am definitely not saying you should be this conservative, but be aware of what a good shot actually is. If you are a good player with a good short game, know that shots that miss the green but are still close to the hole are often more damaging to your stats than your score.

Even with the advent of Flightscope, Trackman and laser range finders, I am still appalled at the horrendous lack of knowledge golfers have about how far they hit the ball. Play any golf course in the world and you will see two things.

Let me give you some advice. The distance you hit an iron is not how far you hit one downhill, downwind, at altitude, when you leaned on one orhit the best shot of your life (and after it landed a coyote picked it up and ran another 50 yards). Seeing as how I have played with many golfers who played 18 consecutive holes without hitting a ball that didn’t land short of the green, this is again not much hyperbole.

“OK, Monte, we get the point, we need to take the average distance we hit our clubs, give it a rest.”

Well, I won’t give it a rest because that is wrong too. It is not the average distance you hit a club, but the distance you hit the ball most often. That sounds like the same thing, but I have found though years of harassing poor, unsuspecting amateurs that the “most often” shot is usually five and sometimes as much as 10 yards shorter than the best shot. But the fear of going over the green chides people into being short all day long. Using the most often approach can result in five or more saved shots from not being short, which is a lot better for your score than the one bogey you might make from the career shot that sails over the green.

I like what the great Jackie Burke said to one of his students when he was pondering a club choice. He asked the unsuspecting young star what he could hit over the green. The student responded, “5-iron.”

Burke then responded, “Well then, wouldn’t that make this a 6?”

There are so many ways to improve your scores if you just use some common sense. The Ivy League lawyer I spoke of earlier, well that kind of on-course behavior runs in the family. His father would attempt flop shots (which he was horrible at) from a place where Phil Mickelson would be hard pressed to get the ball within 30 feet. The results were predictable. He would advance the ball 6 feet in front of him from getting too cute, then the second shot would end up 30 feet, which is where it would have ended up with a normal chip, bump and run 7-iron, foot wedge, topped driver or one of Phil’s gravity defying parachute flops.

The answer to this question is the answer to most every other shot in golf. What shot would have the best cumulative results if you hit it 10 times? It might not be the way Tiger plays it, the way Johnny Miller says is the best way to play it or the way your club champion plays it, but if it’s the way you can do it well most times, it’s the right shot even if your friends laugh at you for putting from 20 yards off the green with a sprinkler in your line.

Now that I have segued to putting, more strokes are lost on putting by people trying to make too many putts. You read the putt, you line up, hit it the right speed and it will go in or it won’t. You have no control over anything but proper speed outside of 3 to 4 feet. Don’t believe me? The best putters on Tour only make two out of five putts from 10 to 15 feet, and many only make one out of five or worse.

My question is: Why are we trying so hard to make long putts? Why do we hit them so hard or and try to steer them on line?

Unless you are a masochist and want to provide hours of entertainment for your friends, dollars for their bankroll and keep the producers of Prozac in business, the next time you play golf try this:

1.  Hit whatever club (using your normal yardages) will end up 5 yards short of the back edge of the green.

2.  Try to hit the ball where your predominate miss won’t miss the green, no mater where the pin is.

3.  Try and hit every putt outside of 5 feet the correct speed and don’t worry about whether it goes in or not.

4.  Be ambivalent about the results of individual shots.

I guarantee your next 20 rounds will lower your handicap.

Don’t let your mental approach hold you back

Monte Scheinblum is a former World Long Drive Champion and Web.com Tour player. For more insights and details on this article, as well as further instruction from Monte go to rebelliongolf.com