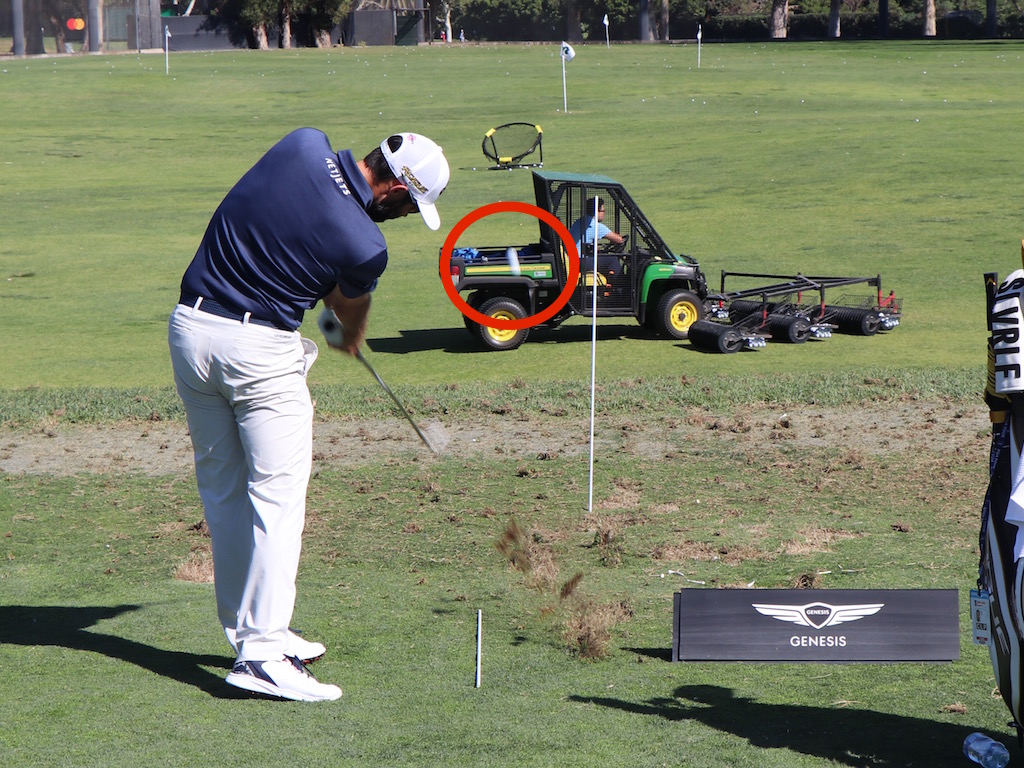 Having inside-the-ropes access to the range at a PGA Tour event means I often see and hear things that most amateur golfers aren’t privy to. While some may think there are “secrets of the trade” that PGA Tour players use to get so good at golf, it often comes down to a combination of incredibly hard work and pure talent.

There are, however, a number of drills and gadgets that Tour players use to practice smarter and get the most out of their practice sessions and abilities.

As I’m busy covering equipment news week-in and week-out on the PGA Tour, I also want to highlight some of the simple drills that PGA Tour use during tournament weeks. It’s important to note that you should absolutely consult with your local professional first before implementing any new drills into your own practice routine, but “Tour Drills” will highlight the things that PGA Tour players use and why. Hopefully they can be helpful for you in some way.

This week, from Riviera Country Club’s range at the 2022 Genesis Invitational, Adam Hadwin breaks down two incredibly simple drills that he uses during tournament weeks, and why they’re effective. To perform these, you’ll simply need an alignment rod (which you can find at most local hardware stores or golf shops), your clubs (obviously) and some range balls.

1) Stick an alignment rod directly on your target line, then hit fades and draws around it

Hadwin says: “The biggest thing I’m trying to do is find the club face, really, and I do that through exaggeration. I’ve got the alignment stick in front of me, and I’ve got to hit cuts and draws around it. But, before just hitting a standard cut and a standard draw, I kind of do it by hitting a pull cut and a push draw, just to feel that club head and that club face awareness in my swing to start out. 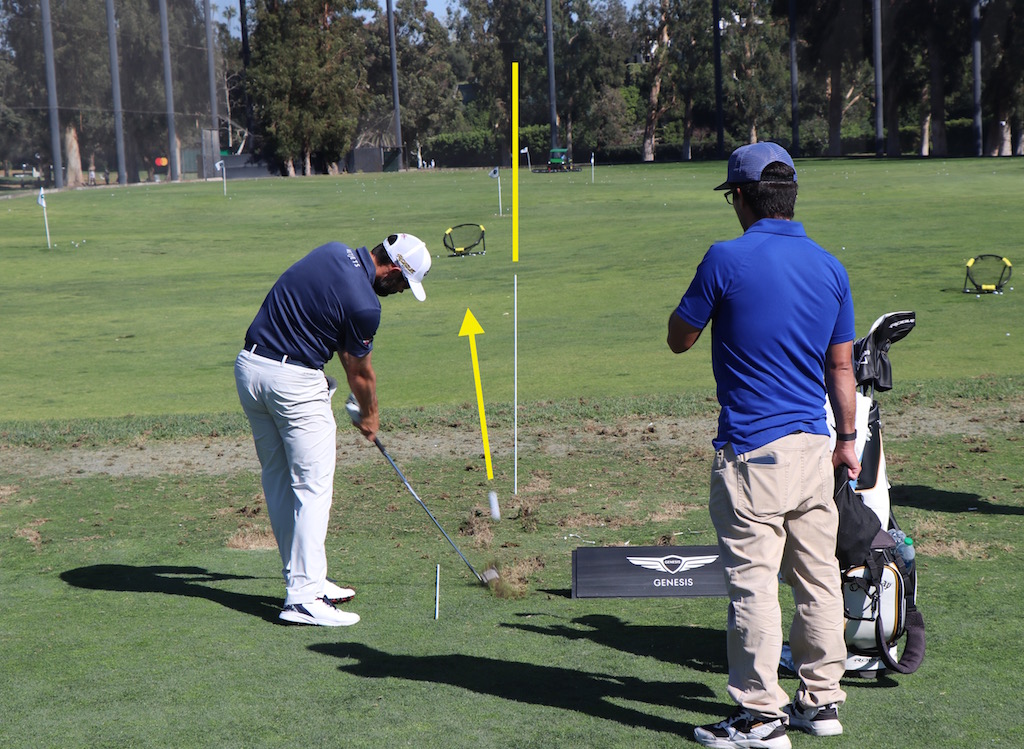 “The idea is to try and let the athlete react. It’s not as easy as that some days, but a lot of times, for me, my miss with a cut has been a pull, and I just need to feel the club head and my arms out-race my body a little bit more. Because I feel like I’m holding it off, but it never holds off. I think it’s just that the club kind of gets in behind my body a little bit too much, and then from there, it’s not really a cut anymore. It becomes sort of a push. To really feel that cut I sort of have to feel like the arms are out-racing the body and swinging around left of them, plus I’m holding off the club face.”

2) Turn your driver upside-down, then swing it both righty and lefty at increasing speeds 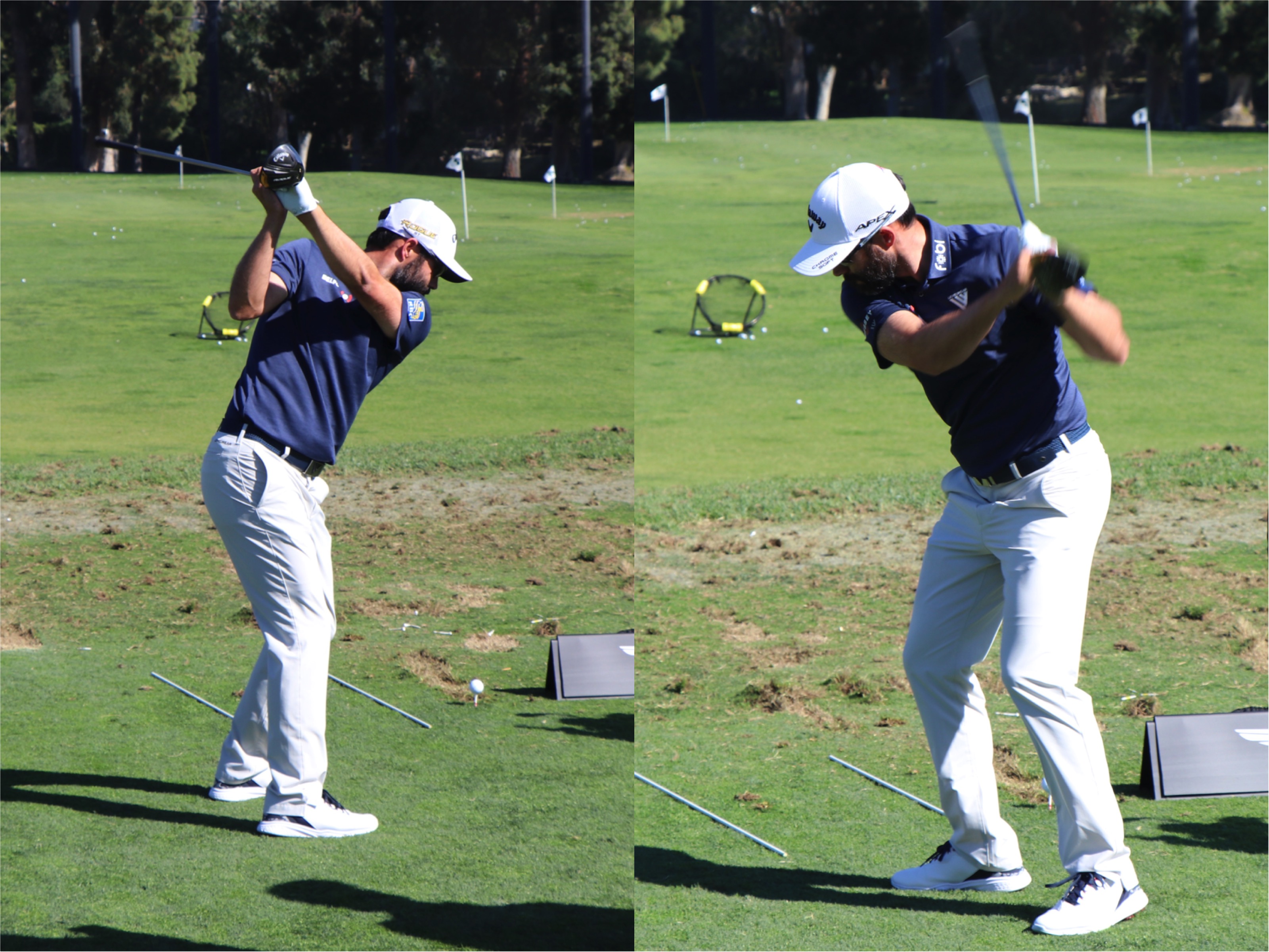 Hadwin says: “My trainer (Jason Glass) literally just put this drill in. I don’t want to say that I’ve done speed training, because I really haven’t done any. But, as for everybody, distance is very important and it obviously plays a very important role in the game. I’ve tried to increase that a little bit. So he just thought it’d be a quick and easy way during tournament weeks to fire up the nervous system a little bit while on the range just to keep that speed up while warming up before going out and playing.”

Make sure to check out all of our photos from the 2022 Genesis Invitational here.

Related Topics:adam hadwinCallaway
Up Next 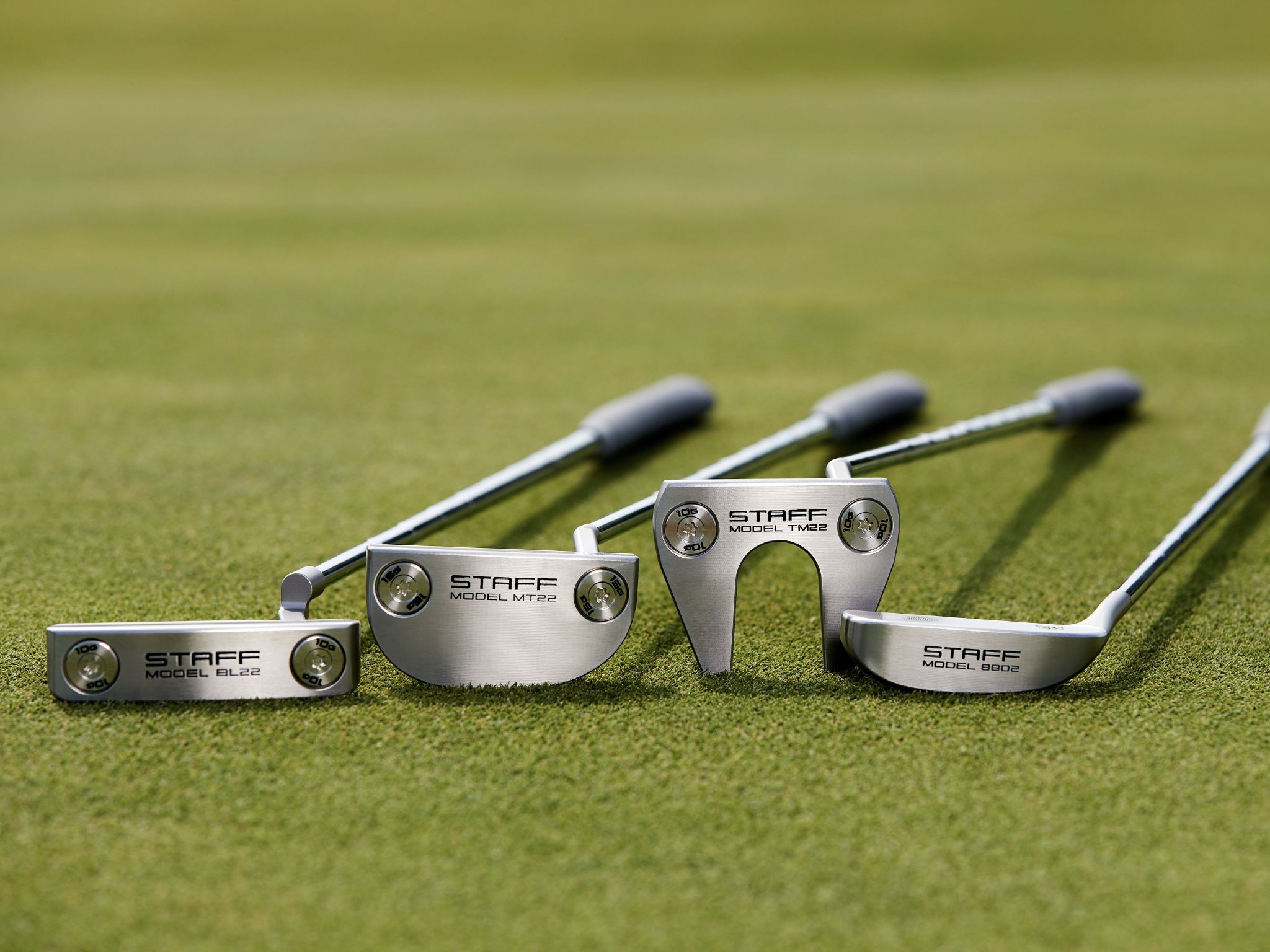 Each new putter is milled from a solid block of ultra-soft 304 stainless steel in design to offer the perfect combination of stability and feel, while all four are also 100% precision milled with exceptionally tight tolerances in a bid to offer superior consistency and roll.

“Performance has always been the top priority for Wilson Golf, and our mission is to provide top-of-the-line products for golfers of every skill level. The innovation and craftmanship of our new Staff Model putter collection is something that we’re truly proud of and will help all golfers feel more confident on the greens,” – Tim Clarke, President, Wilson Golf. 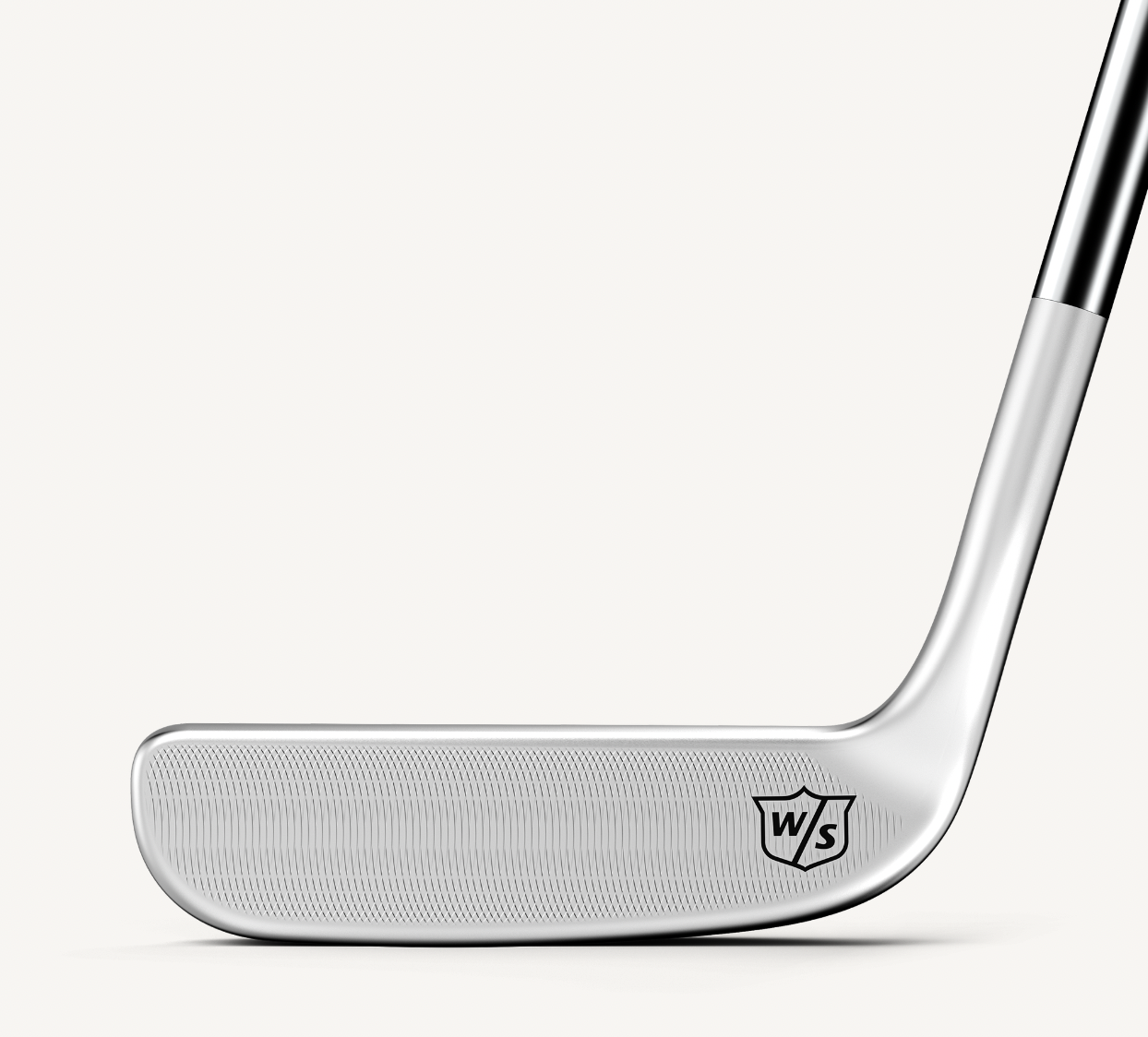 “Inspired by The Original Wilson 8802, the shaft-over-hosel design provides a smooth and seamless transition from shaft to head at the ball address, with a full toe hang.” 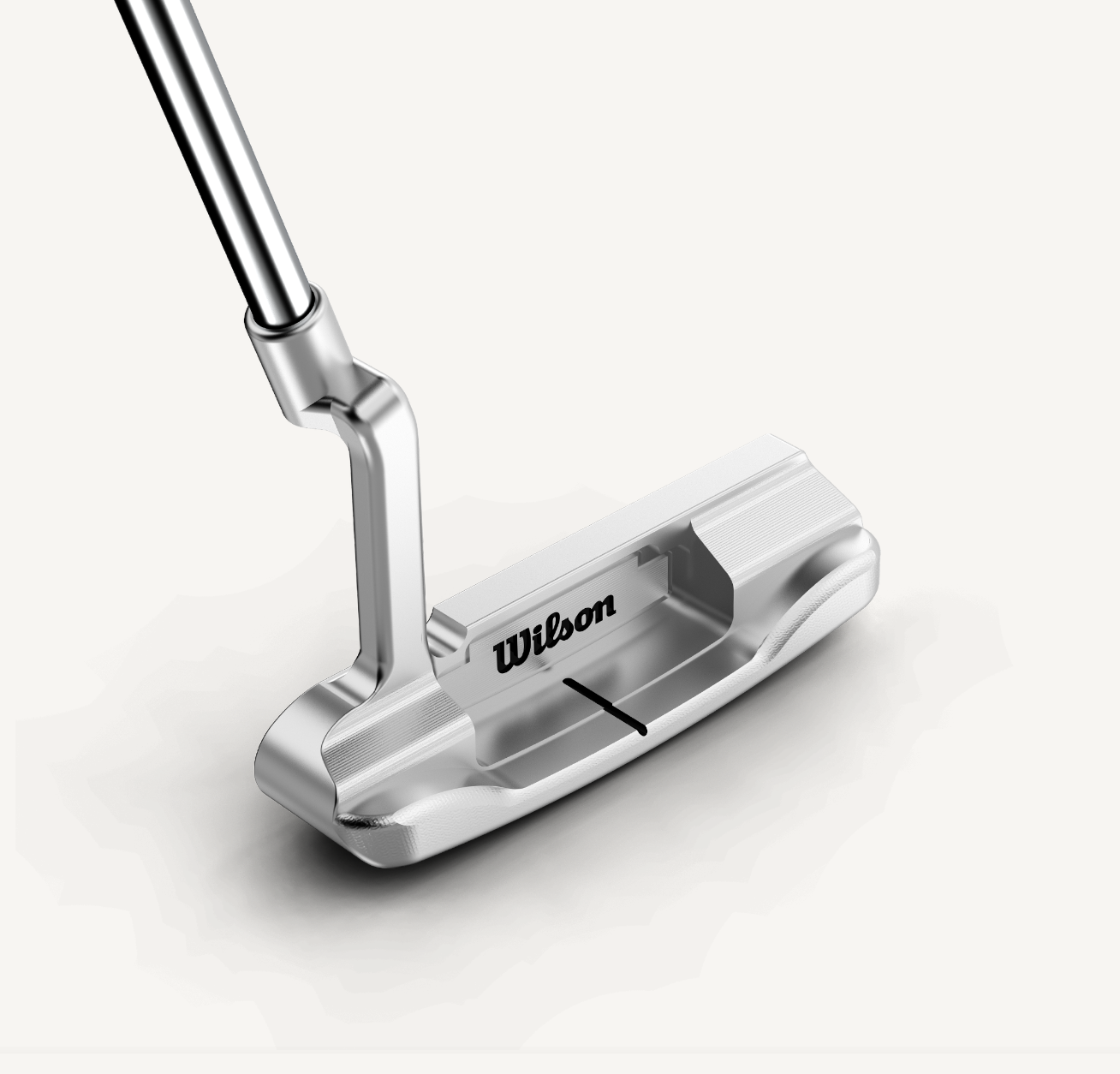 “A tour-proven blade style putter features a plumber’s neck hosel design for a clean setup and alignment to the ball, with a medium toe hang.” 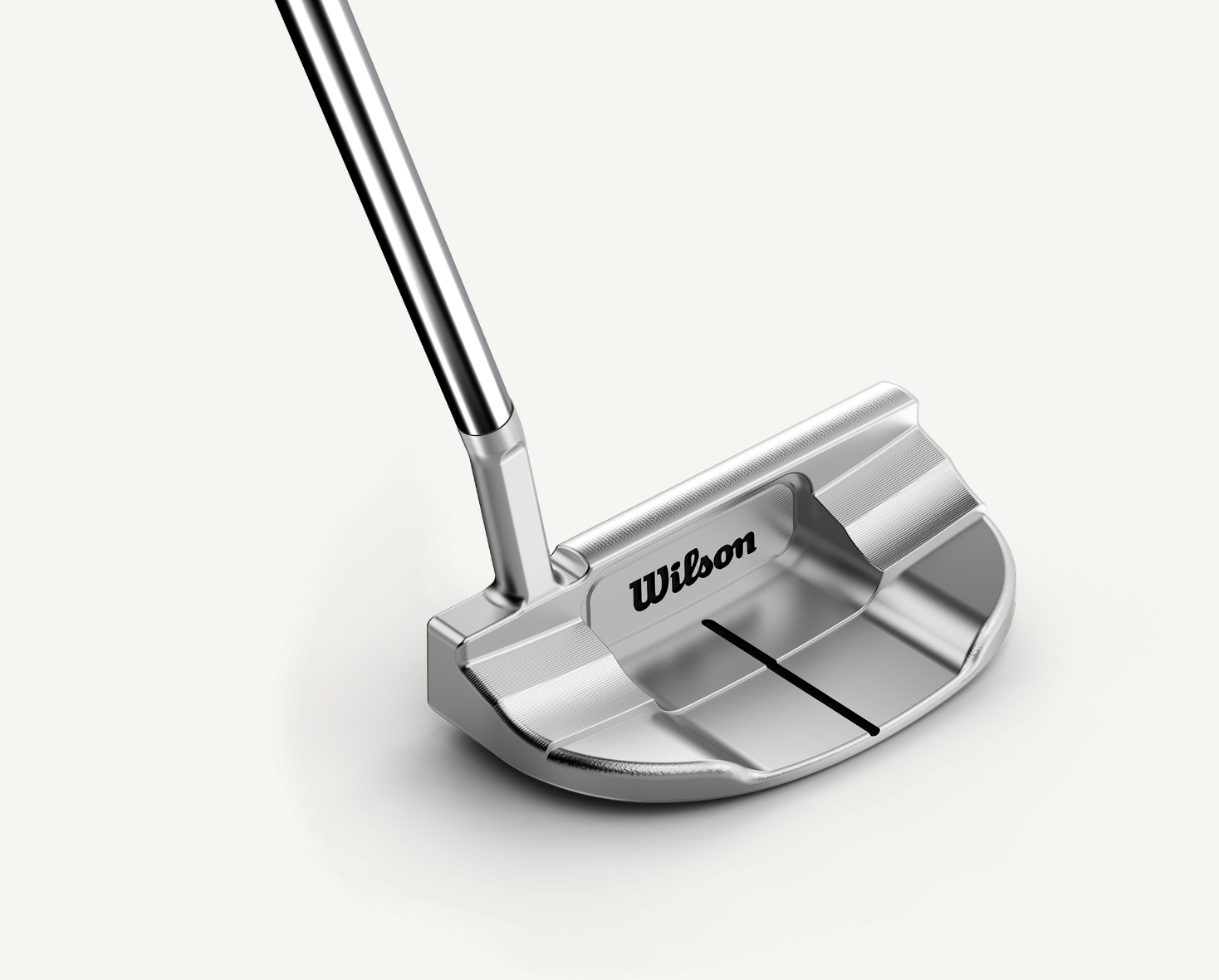 “A short, slant-neck hosel on this mid-mallet design provides a unique feel upon address and alignment, with a medium toe hang.” 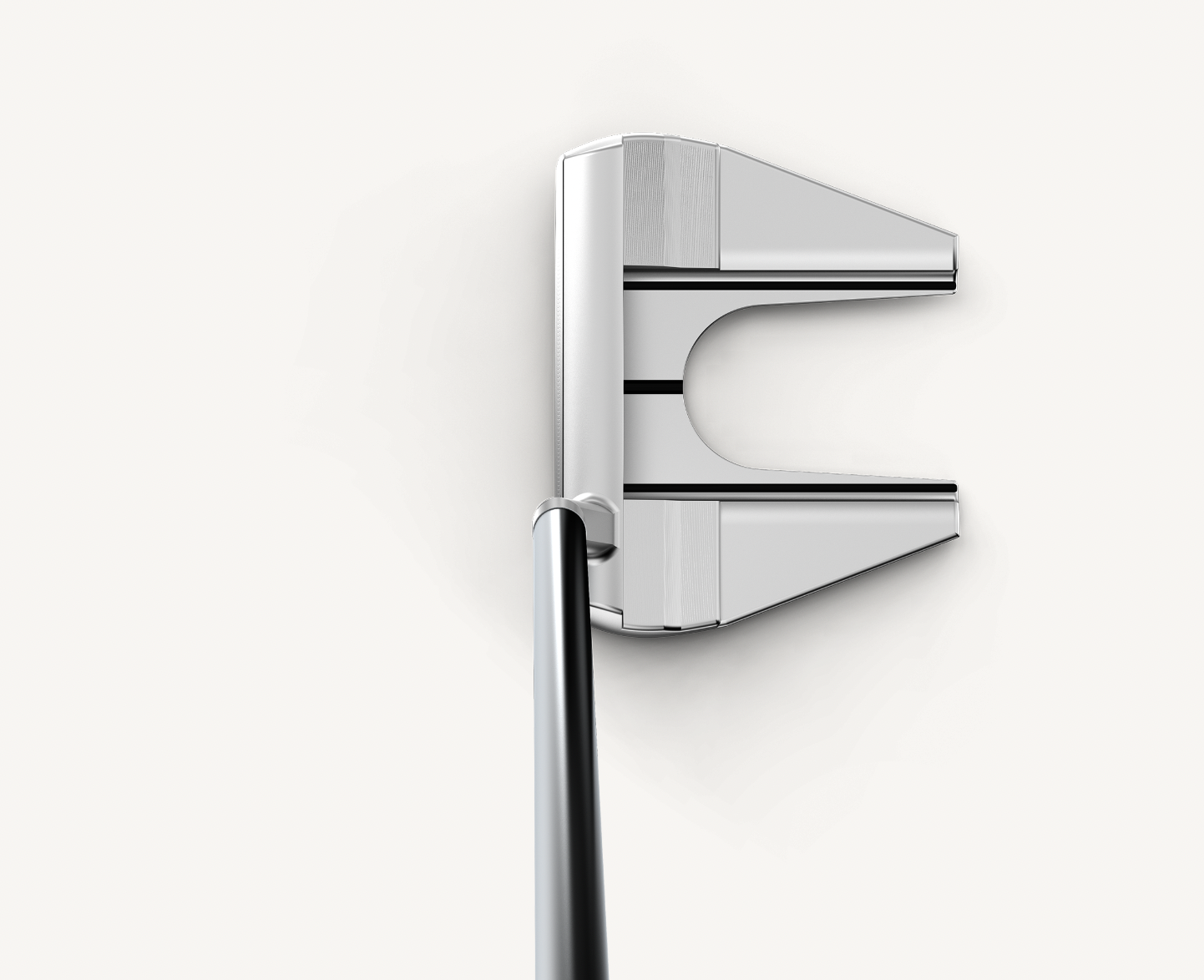 “The twin tail, high MOI tech mallet provides forgiveness and stability for golfers of all levels, with a moderate toe hang.”

The putters are available for pre-sale now on Wilson.com and at select retail locations beginning Tuesday, Nov. 1 and are priced at $349.99 each. 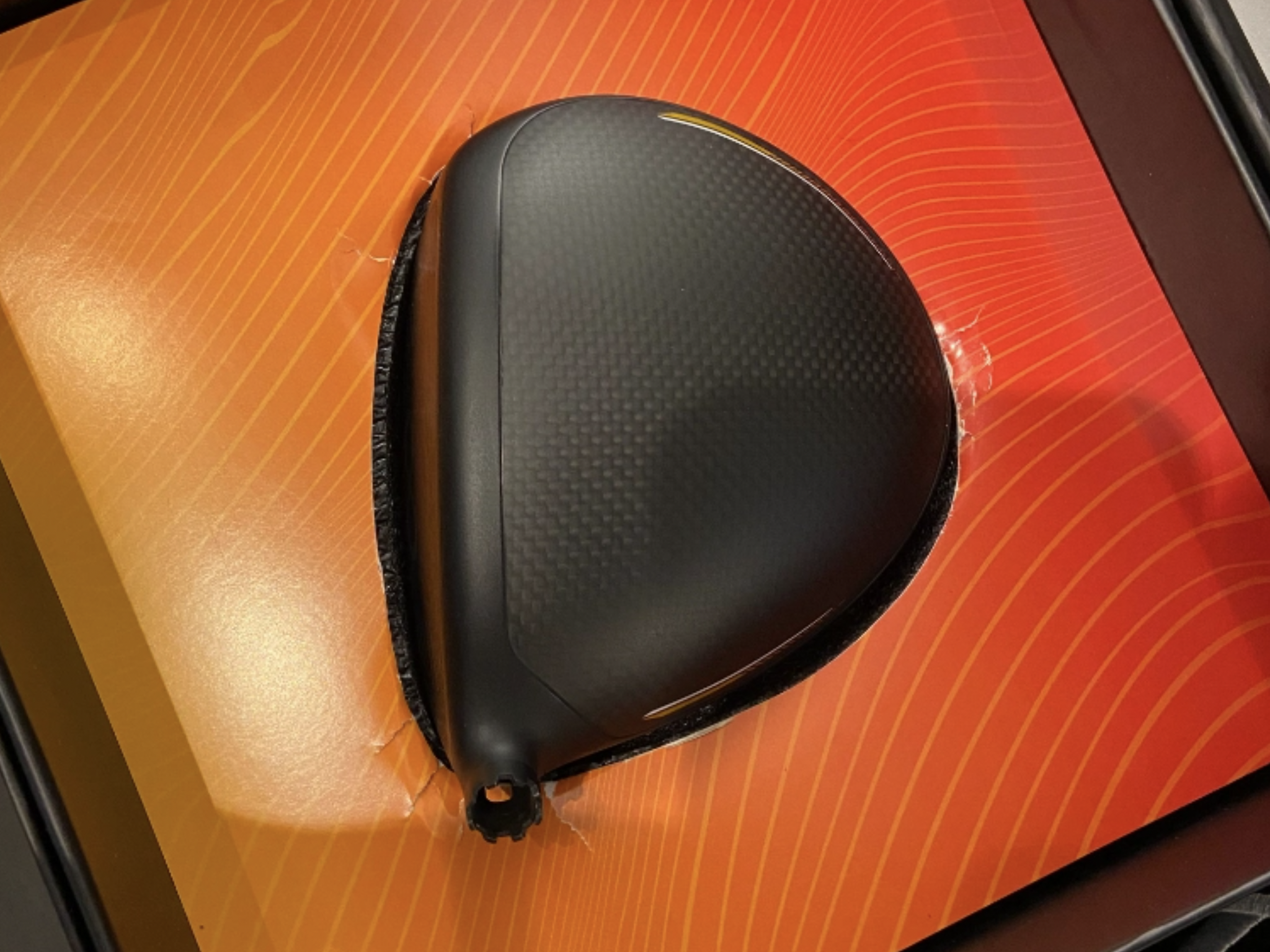 Currently, in our GolfWRX buy/sell/trade (BST) forum, there is a listing for a rare Cobra LTDx Long Drive Head (Kyle Berkshire Edition) 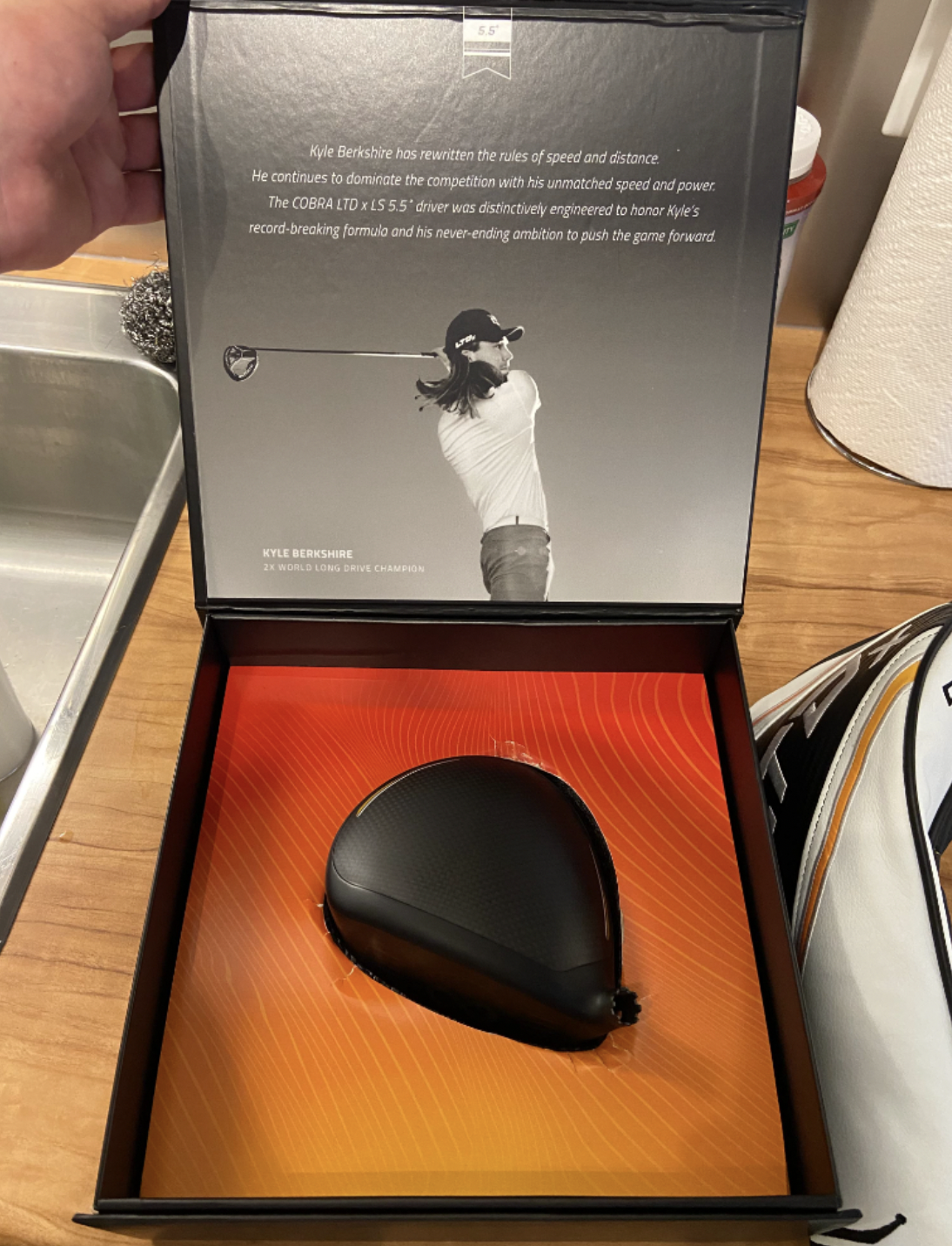 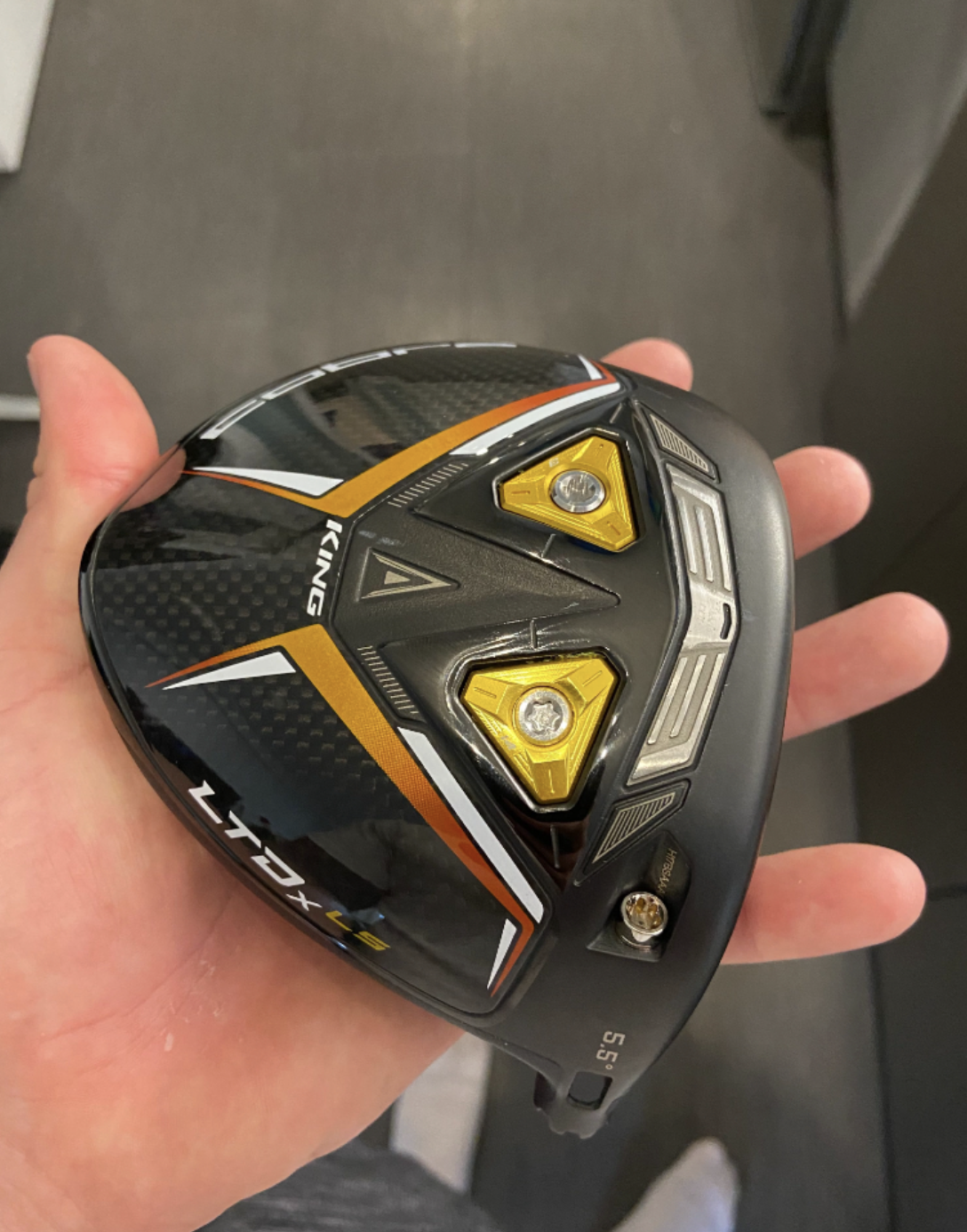 From the seller (@thorsness): “Cobra LTDx LS 5.5* Long Drive Head Kyle Berkshire Edition. This is an extremely rare club that I have never seen for sale on the preowned market, and trust me, I looked everywhere. It took me about 6 months to get my hands on one in a limited released directly from Cobra. Unfortunately, after dabbling in the long drive game, I’ve came to the sad realization that my back cannot withstand the required amount of reps.

There are quite a few noticeable differences between this and the standard loft retail heads: it is definitely a bit deeper, does not have the sight dot on the crown, and also does not have the ripples on the crown. As someone who has always struggled with spinning the ball too much, the few reps I got on the launch monitor with this thing showed it was by far the lowest spinning driver head I have ever hit.

It’s been hit about 10-15 times max. These were $800 brand new for only the head when they were released by Cobra and there was less than 20 of them available (according to a Cobra rep that has connections to my home course). It cost me over $1000 to get it shipped up to Canada with shipping and import fees, so I’m looking to recoup that. $1000.”

To check out the full listing in our BST forum, head through the link: Rare Cobra LTDx Long Drive Head (Kyle Berkshire Edition) 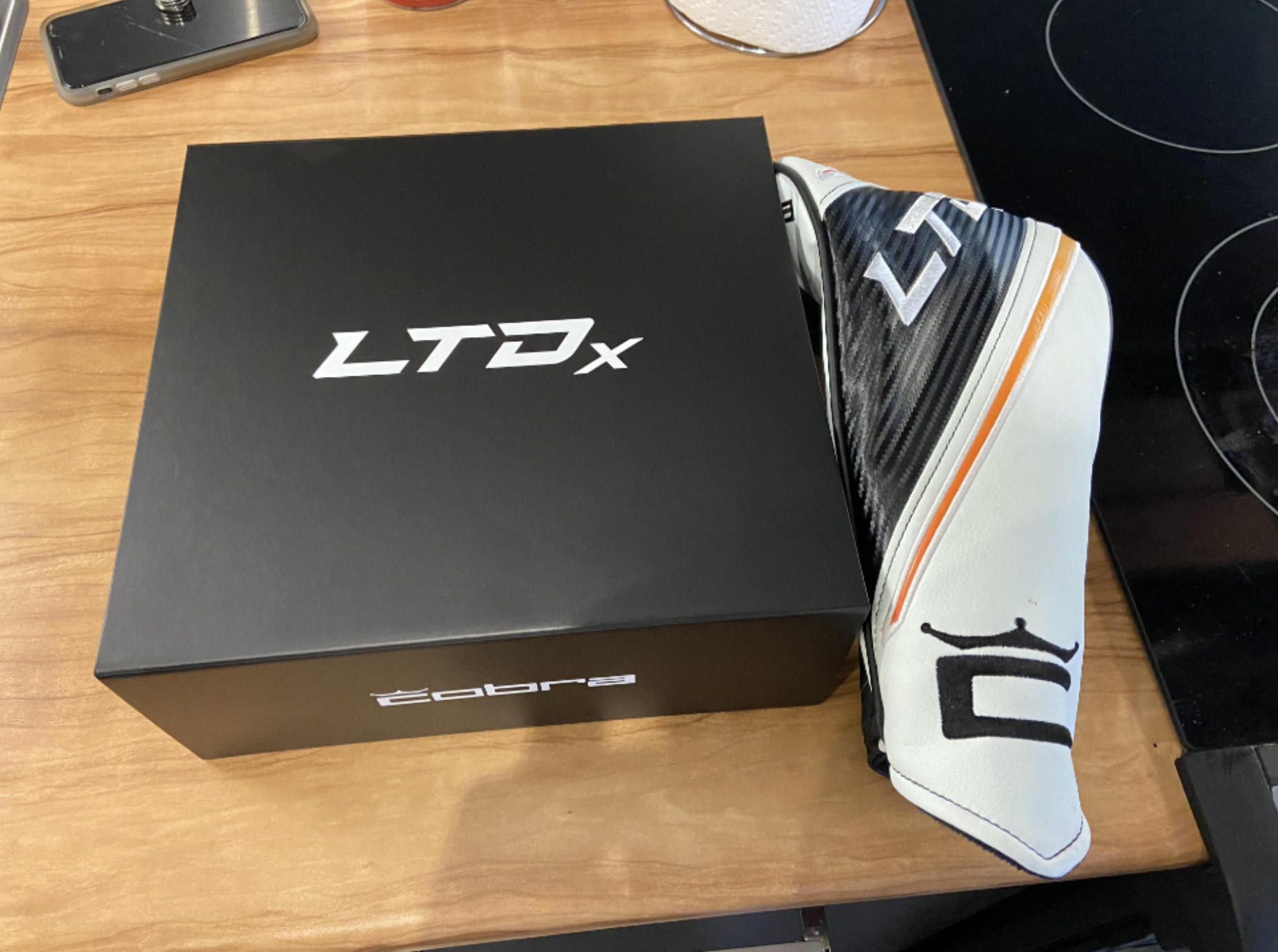 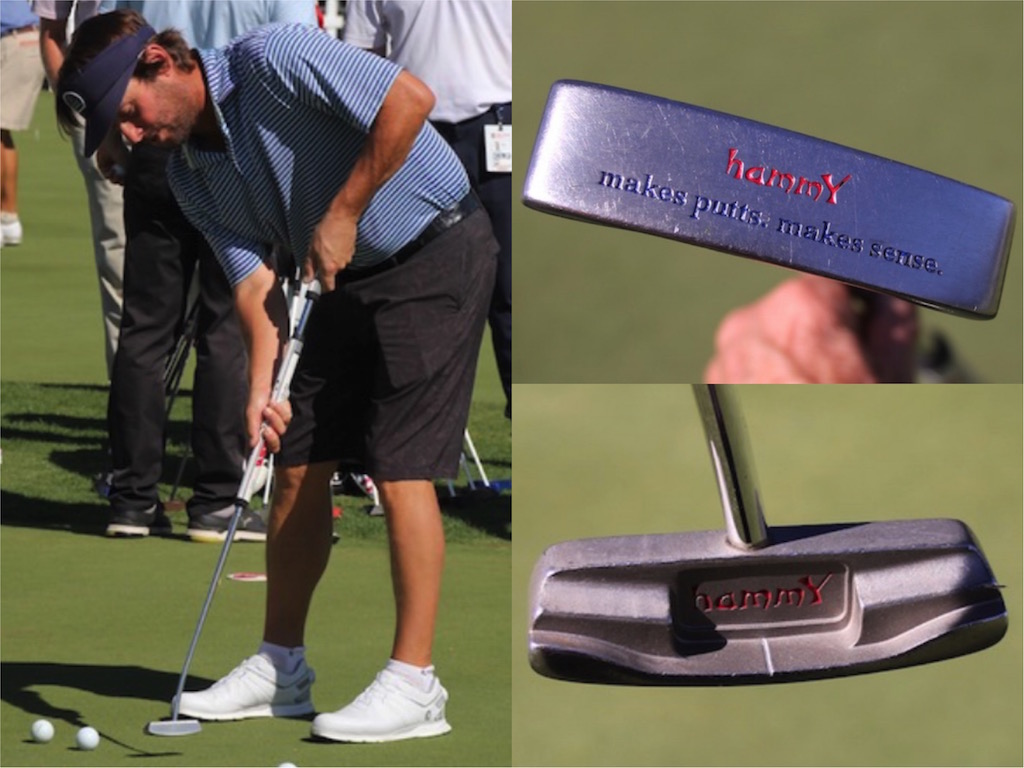 Spencer Levin is already a folk hero in the golf world, and his legend is likely to grow this week thanks to a new putting technique he’s implementing – and he’s using the technique with a putter from 2004 that he found in his dad’s shed. 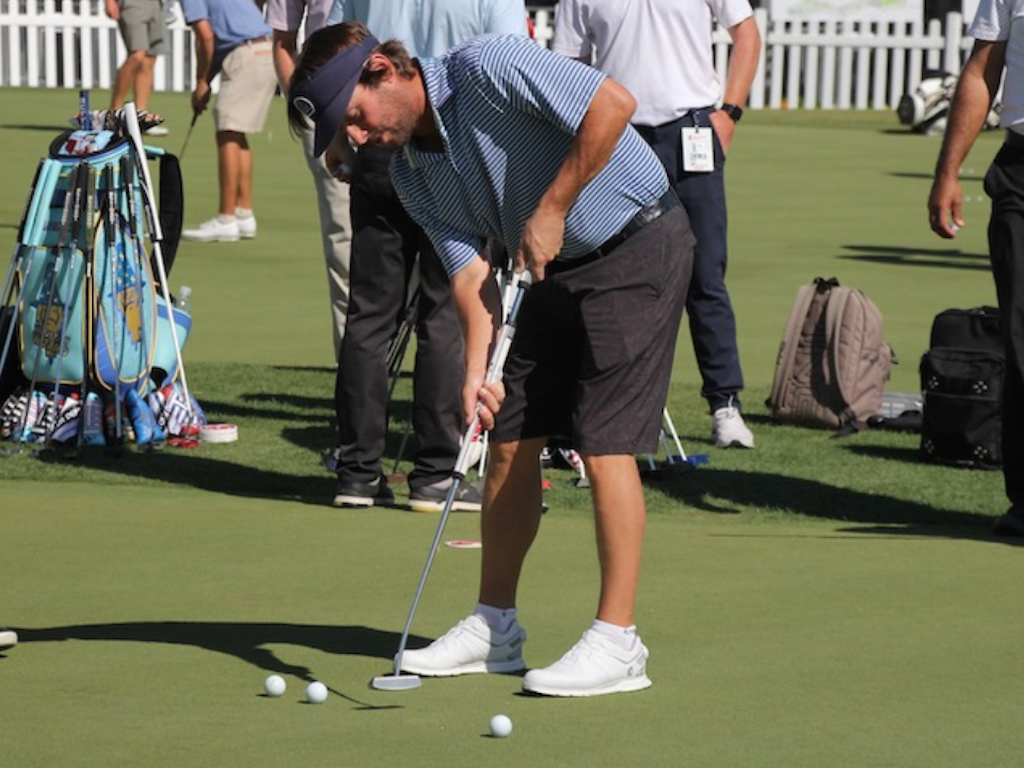 On Tuesday ahead of the 2022 Shriners Children’s Open, GolfWRX.com spotted Levin – who qualified for the event via Monday qualifier – using a hammY putter, which was released to the public in 2004. A quick Google search reveals that the putter is currently being sold for $119.95 at intheholegolf.com. 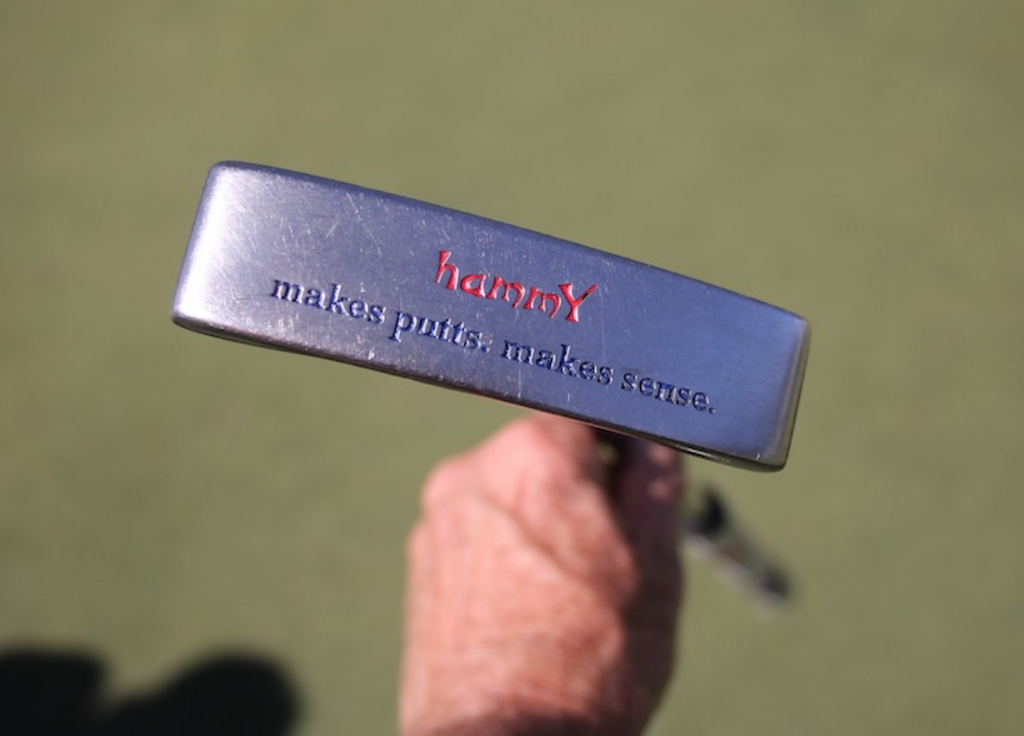 According to the product description of the hammY putter, it’s built with a longer length (37-38.5 inches), a split grip, and a triple-bend, center shaft construction. It’s designed to be used with a hands-spread grip and a 45-degree open stance, with the ball played back in the stance to allow for a natural forward press and better view of the line.

LPGA player Natalie Gulbis actually first made the putter famous by winning with it in 2007, and now Levin is bringing the design to the PGA Tour 15 years later. 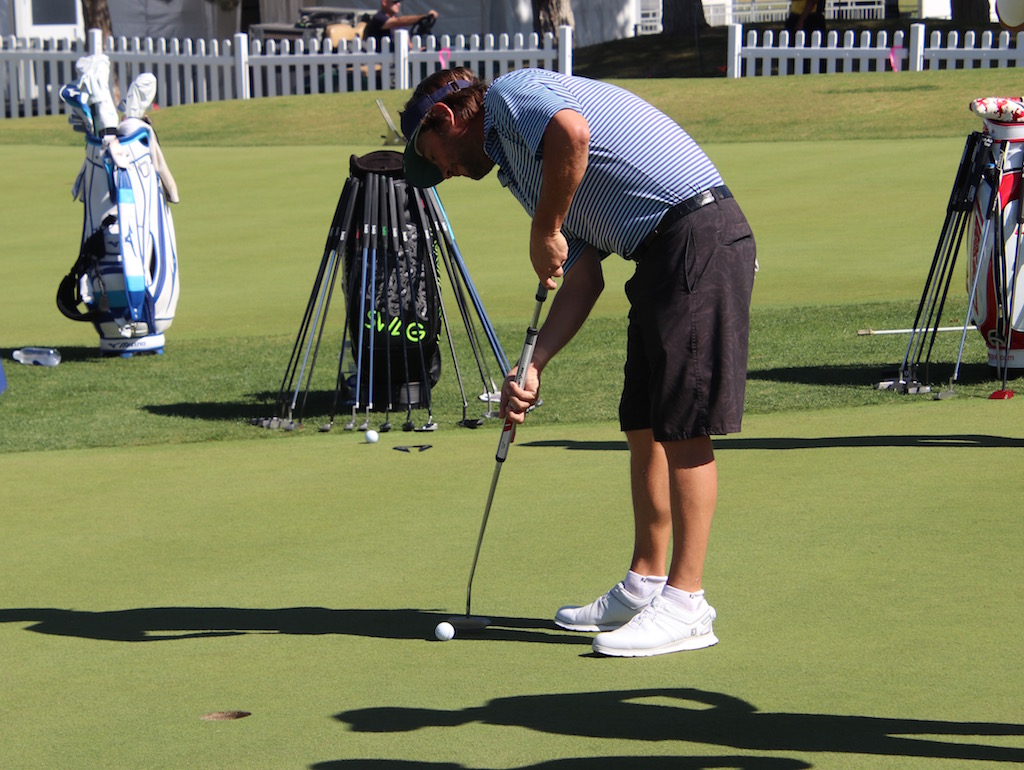 GolfWRX caught up with Levin on Tuesday in Las Vegas to get the backstory of how the hammY ended up in his golf bag:

“I’m going split grip. That’s the way I think it says you’re supposed to use this putter. I think when they designed it they wanted you to tuck your arm in and stand open with it, and use your right hand only, but I know that’s illegal now so I’m just taking my arm off [my chest].

“The only reason I tried it was because I was fooling around with a short putter and I was just gripping way down the shaft, and I was starting my short putts on line. So then I remember, it’s funny, this [putter] came out of my dad’s shed. He’s had this putter for like 30 years. I remembered he had it, and I went to fool around with it, and the first day I used it I made 11 birdies with it. Ever since then I been using it, so. Hopefully I keep it rollin.” 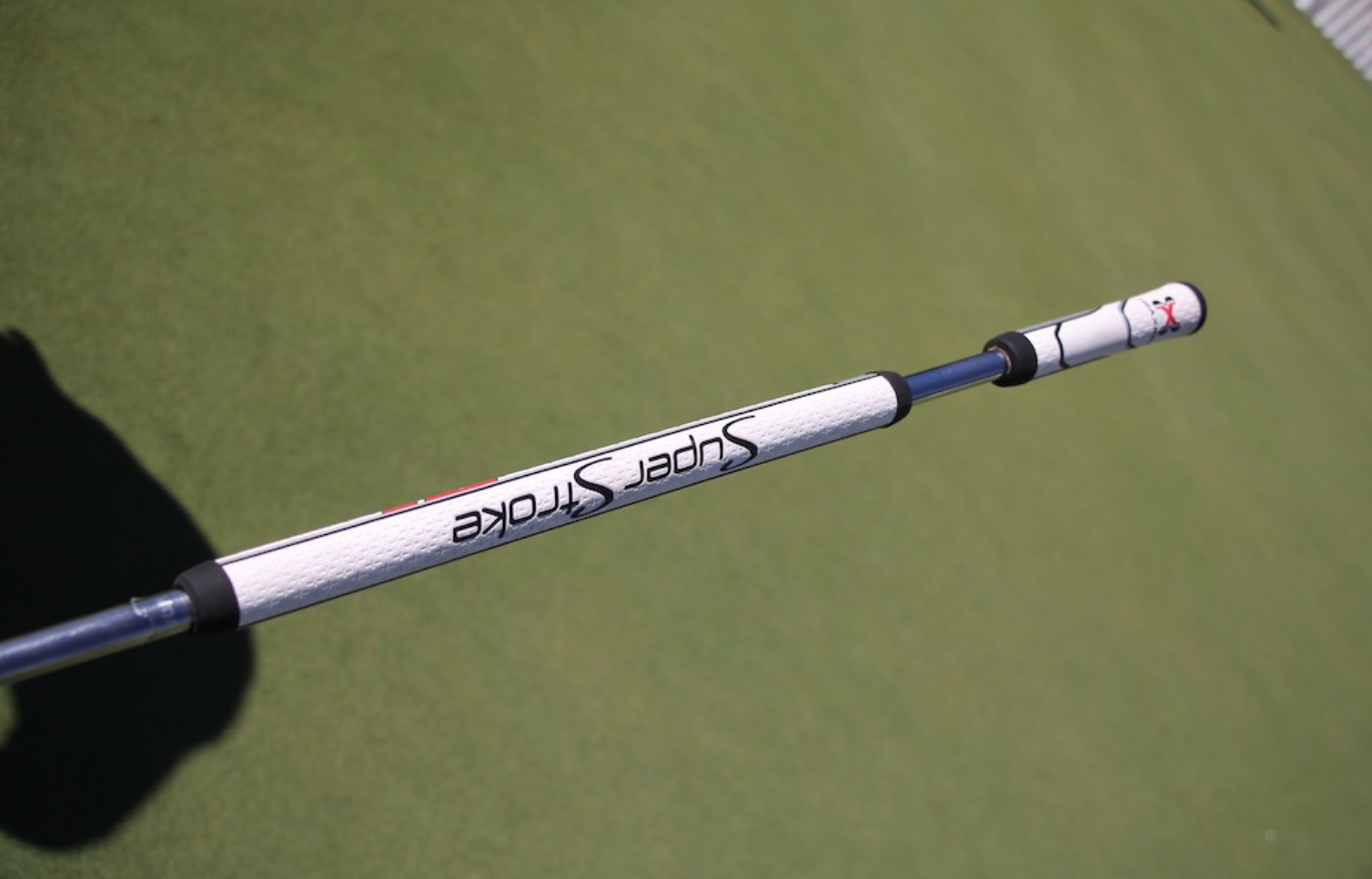 Wait, so Levin really found this hammY putter in his dad’s shed, and he’s using it to play in a PGA Tour event? 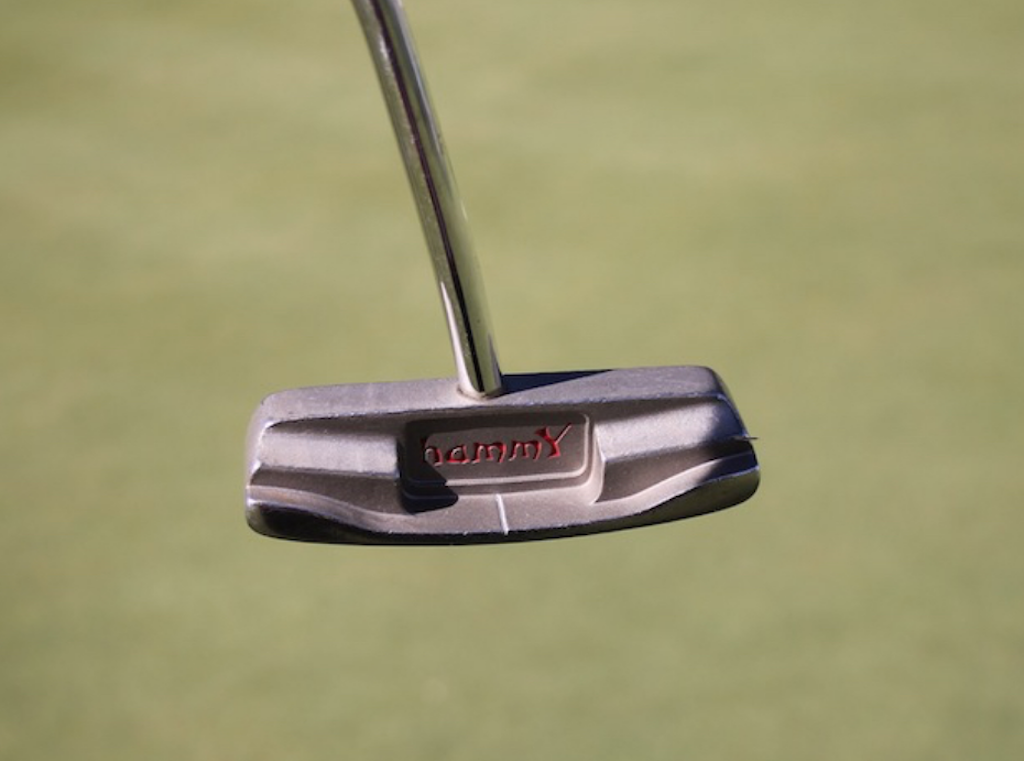 “I knew he had this putter in the past, and it was kinda similar to what I was messing around with, you know?” Levin said. “And then I just grabbed it and put a new [SuperStroke] grip on it…the first time I used it was in a Monday for Napa, and I putted good, and I used it yesterday, and I putted good yesterday. So it’s just kinda, something I been using…ever since I’ve used it, I haven’t even thought about using a different putter. Whereas before I was changing putters everyday.” 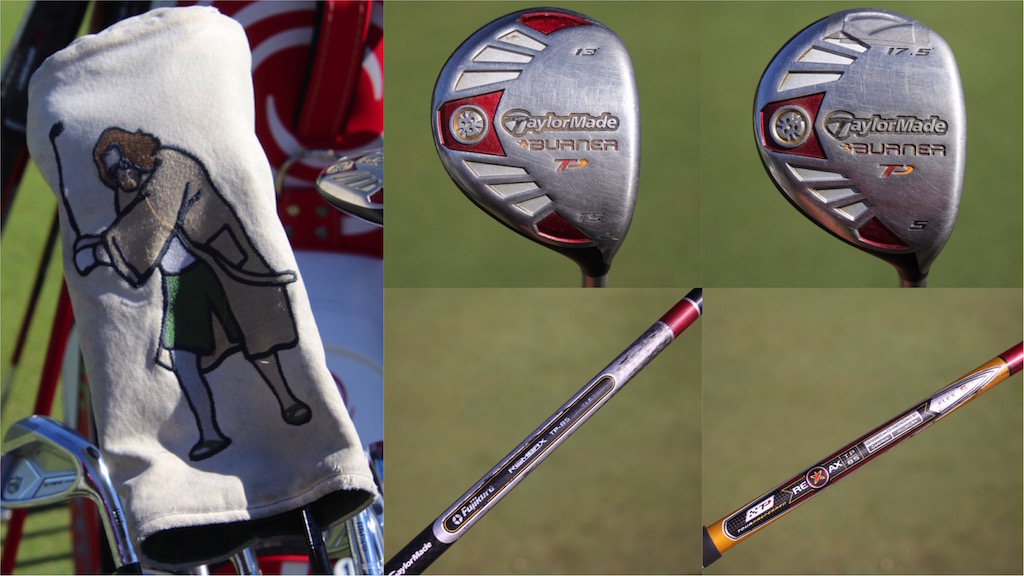 The rest of his bag setup is just as legendary as his putter, too. Most notably, he’s using TaylorMade Burner TP fairway woods (which were originally released in 2007), and he’s using them with stock shafts. He’s also using a headcover made by Seamus Golf that’s inspired by “The Dude” character in the 1998 movie The Big Lebowski – if you haven’t seen the movie, then “obviously you’re not a golfer.”