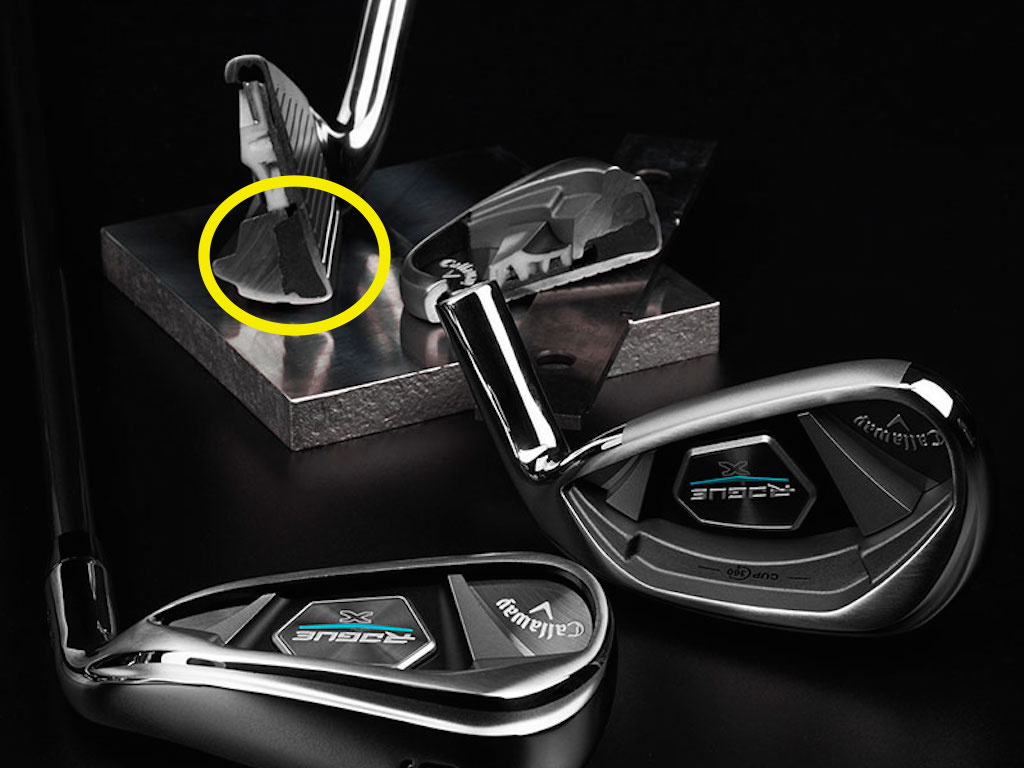 With its new line of Rogue irons — consisting of Rogue, Rogue Pro and Rogue X models — Callaway continues its search to answer a conundrum that’s plagued game-improvement irons for years; how do you make an iron that produces great ball speed without sacrificing sound and feel. The dilemma is that in order to increase ball speeds, engineers must make the faces of the irons thinner. The problem is, the thinner they make the faces, the more vibration is caused at impact, creating a longer-lasting, higher-pitched sound. Very few golfers want that off-putting, clicky sound, but they do want the ball speed and distance.

So, that’s why companies are experimenting with different materials and injections between the faces of game-improvement irons and their bodies. That buffer creates a dampening effect to reduce vibration, while still allowing faces to be constructed thinner to raise COR (coefficient of restitution, a measure of energy transfer) and ball speed. Companies such as PXG irons use TPE injections, and TaylorMade uses SpeedFoam in its new P-790 irons; Callaway says those constructions either constrict speed, or they don’t have a profound enough effect on vibrations.

For its Rogue irons that are made from 17-4 stainless steel, Callaway is using what it calls urethane microspheres, which are essentially little balls of urethane that it combines together, in the cavities of its irons. The difference between these spheres and other foams and materials on the market, according to Callaway, is that the material is porous. Callaway says the microspheres work to dampen sound without negatively effecting ball speed. 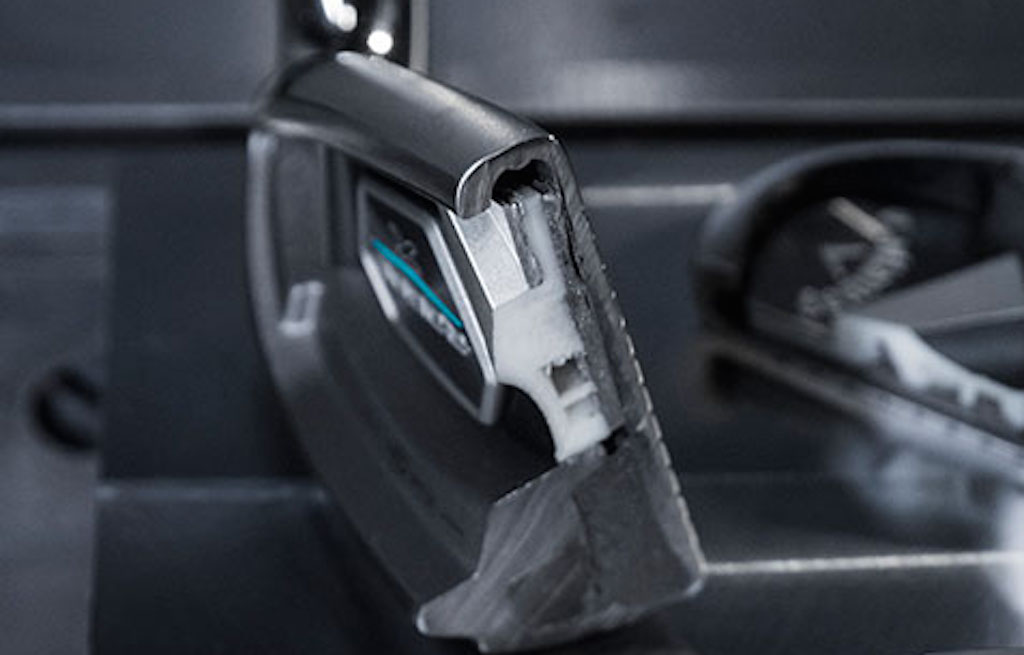 A look at the inside of a Rogue iron, via Callaway’s photography

The inner material in the cavity works in tandem with familiar technologies from previous iron releases such as Apex, Epic and Steelhead XR. Callaway says it has improved upon its VFT (variable face thickness) and Face Cup technologies, focusing on thinning out portions of the face where golfers tend to miss shots — low on the face, on the heel and on the toe. Each of the Rogue irons also uses Internal Standing Wave by way of Tungsten-infused weights that help control the center of gravity (CG) in the club heads; that means centering the overall weight between the scoring lines, and controlling where the CG is placed vertically throughout a given set (re: higher on the short irons for more control and spin, and lower on the long irons for more height).

For the consumer, all of this means getting performance-driven irons at a lower price compared to the Epic and Epic Pro irons. Each of the irons will be available for pre-sale on January 19, and come to retail on February 9. Read on for more info on each of the specific irons, and the Rogue and Rogue X hybrids that introduce Callaway’s Jailbreak technology into hybrids for the first time. 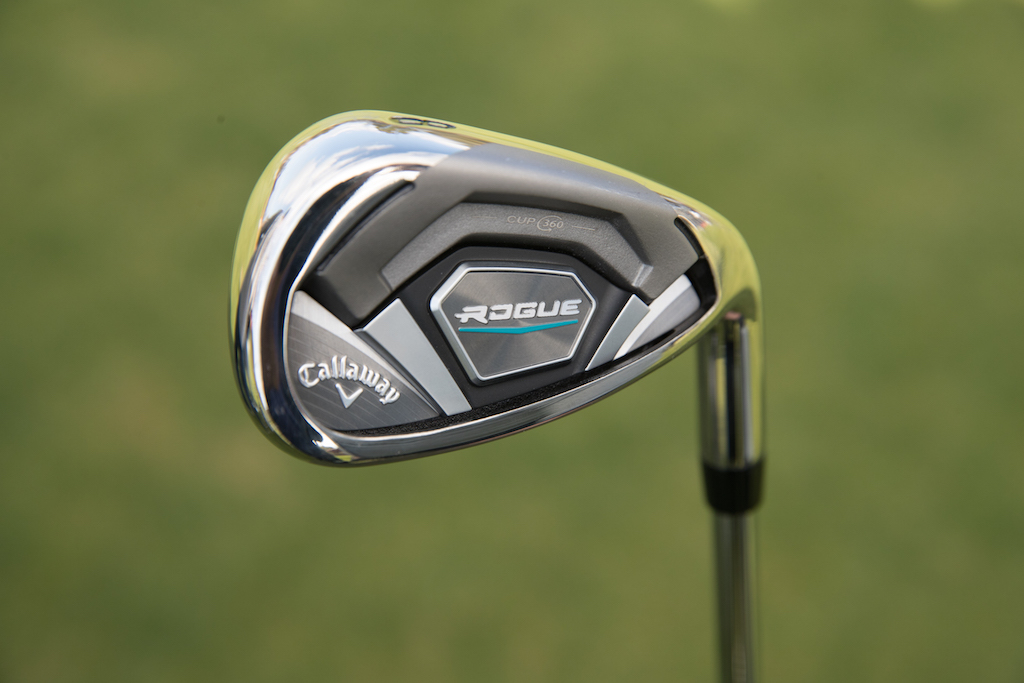 Callaway’s Rogue irons are the standard model in this line of irons, equipped with all of the technologies described above. According to Callaway, these are essentially Steelhead XR replacements, but have more compact shapes. In the Steelhead XR irons, Callaway used a wider profile in order to center CG between the scoring lines, but due to the inclusion of the Tungsten-infused weights in the Rogue irons, it was able to shape the irons more similar to XR and X-Hot irons of the past — more preferable shapes for GI irons, according to Callaway. 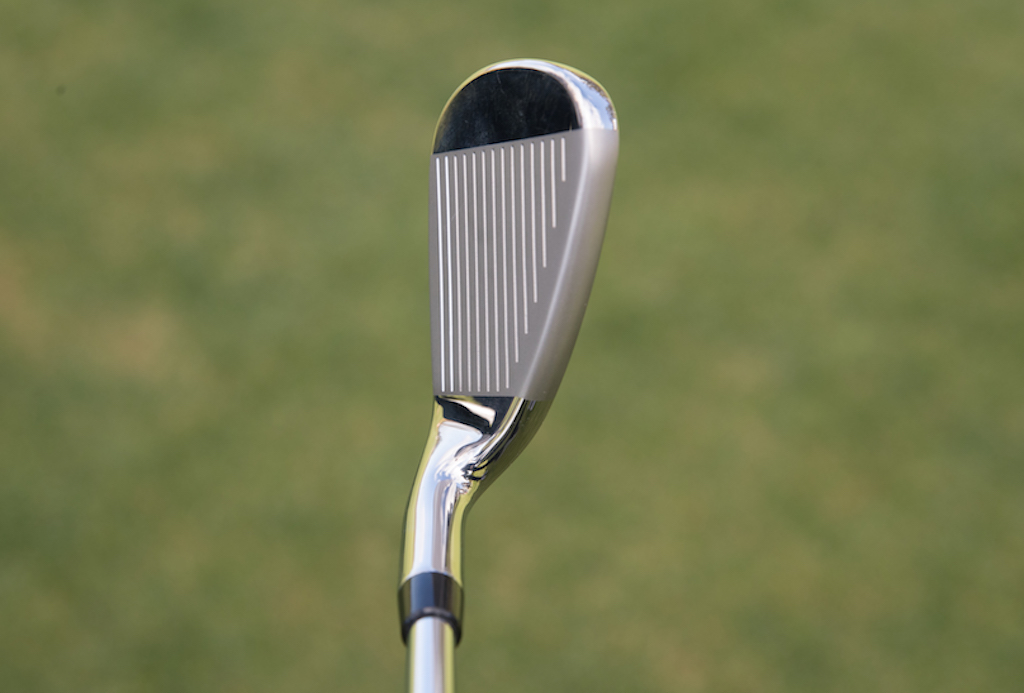 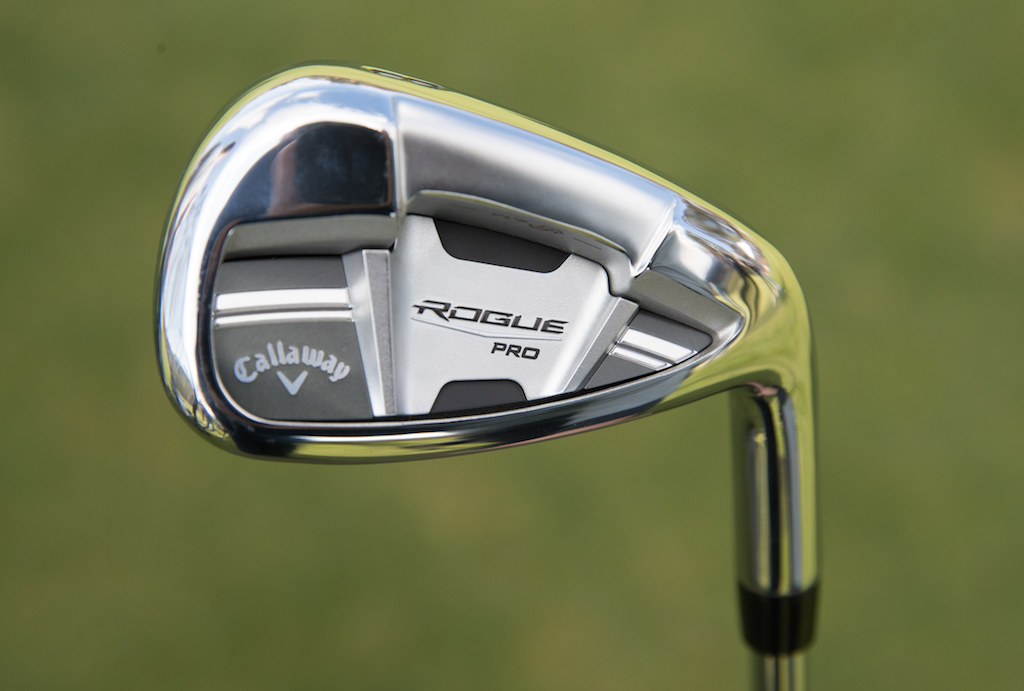 The Rogue Pro irons, as you may expect, have a more compact shape, thinner toplines and thinner soles than their standard-model-counterparts. Therefore, the Pro design will yield more control that better players will prefer, but they are still packed with all of the performance-enhancing technologies of the Rogue irons. They also have a chrome plating that better players may be drawn to. 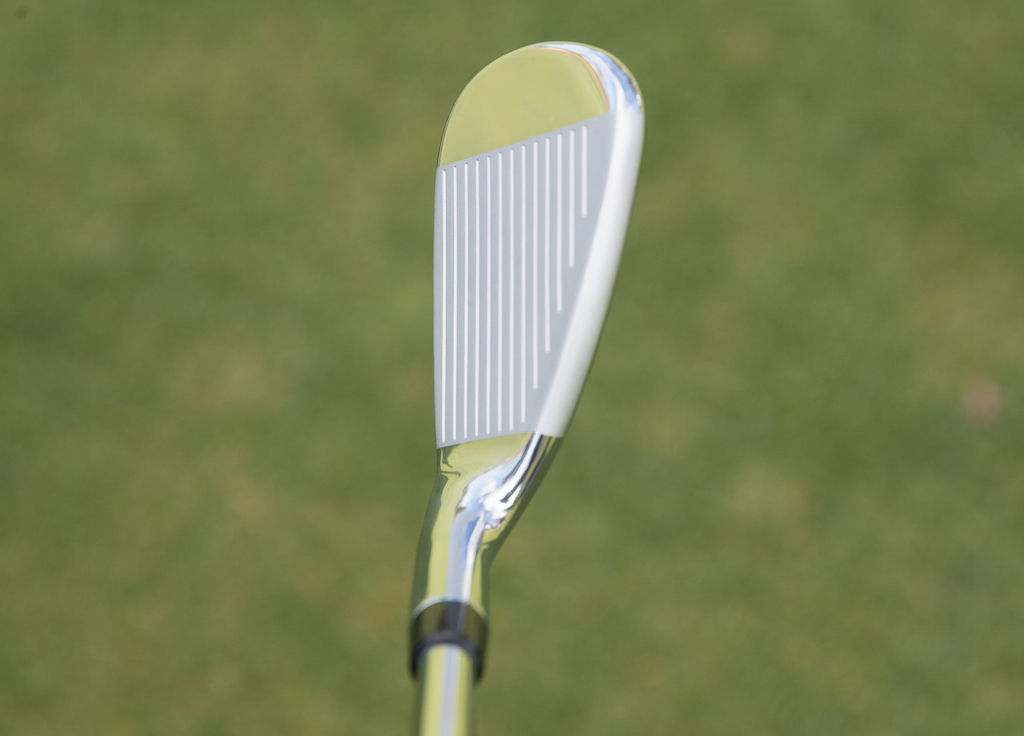 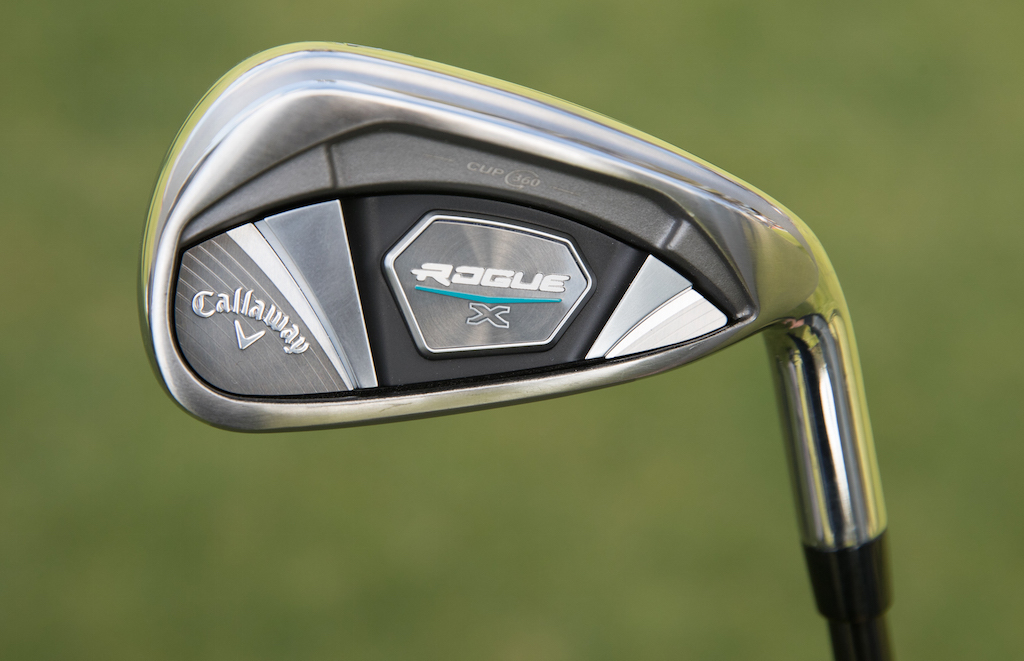 Callaway described the Rogue X irons to me as “bomber irons.” They have lofts that are 3-to-4 degrees stronger than the standard Rogue irons, and they have longer lengths and lighter overall weights, but according to Callaway, they will still launch in the same window iron-for-iron (re: a 7-iron will launch like a 7-iron). Despite cranking down the lofts, they have bigger profiles, wider soles and more offset; those designs work to drag CG rearward, which helps to increase launch. 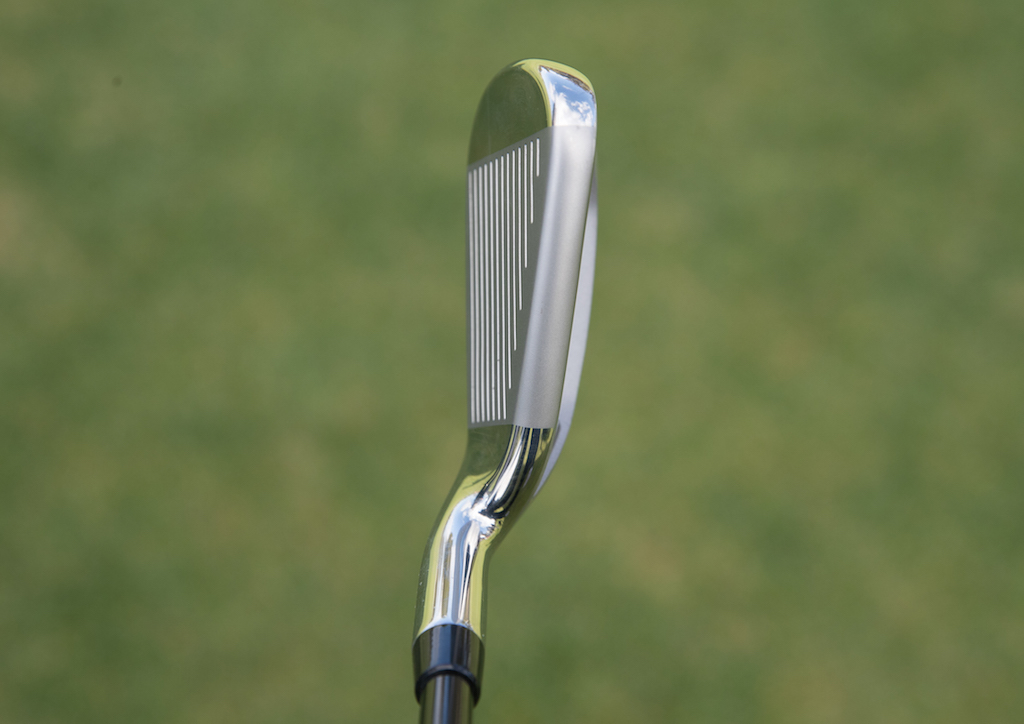 Combine that design with the Rogue’s VFT, Face Cups, Internal Standing Wave and urethane microspheres, and the result is an iron that’s “all about distance,” according to Callaway. 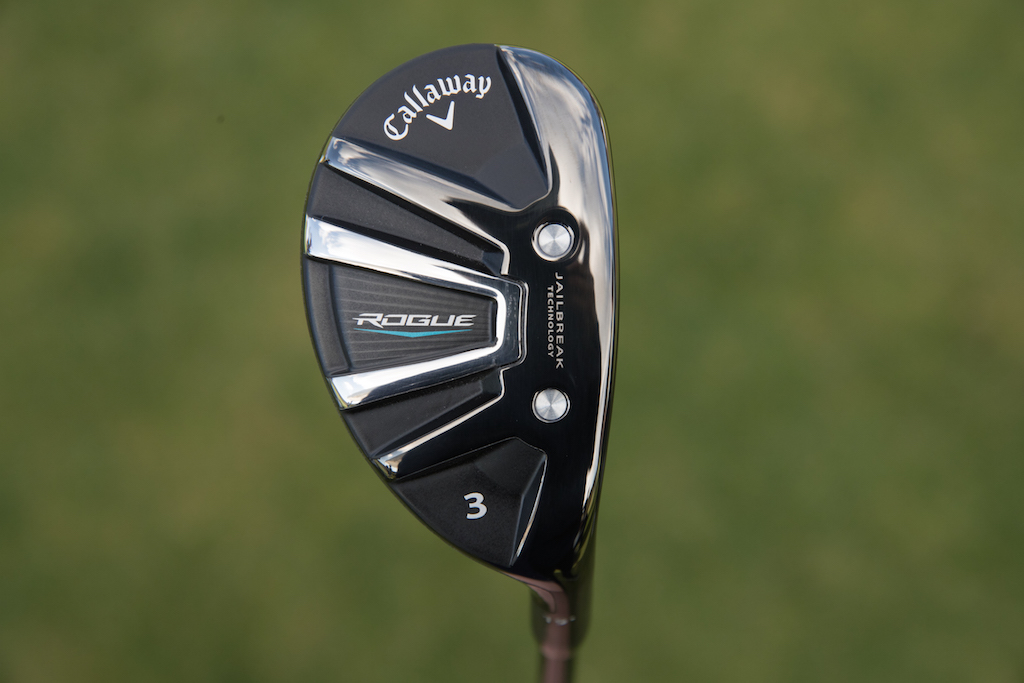 As noted previously, the Rogue and Rogue X hybrids include Callaway’s Jailbreak technology. Like Callaway’s Rogue fairway woods, they use stainless steel bars behind the face instead of the titanium bars that are used in the Rogue drivers. Also, like all of the other Callaway clubs that use Jailbreak, the idea of the design is that two parallel bars inside the club head connect the sole with crown help to add strength to the body at impact, allowing the faces to be constructed thinner, thus, create more ball speed across the face. The Rogue and Rogue X hybrids also have Callaway’s familiar Face Cup technology.

The standard Rogue goes up to a 6-hybrid, while the oversized, Rogue X “super hybrid” goes up to an 8-hybrid. Similar to the Rogue X irons, the Rogue X hybrids have an oversized construction, a lighter overall weight, and longer lengths. The goal with these Rogue X hybrids is to create higher launching, more forgiving and longer hybrid options for golfers who need help getting the ball in the air.