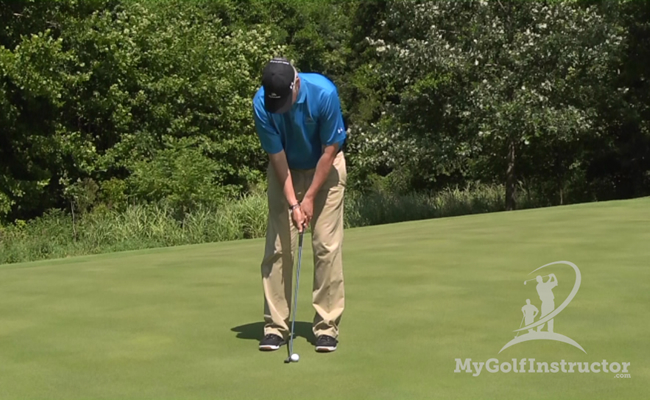 If you were going to track one stat and one stat only on each round you played to help lower your scores, which stat would it be? GIR? Fairways Hit? Putts Per Round?

If you are a tour player, your answer might be that just one stat would not cut it. At the highest level of competition, golfers need to know where they stand on every single stat possible to analyze their entire game against their fellow competitors. For the average player, however, that’s a little complicated. It’s difficult and also time consuming to try to track every stat on every hole for every round you play. In addition, you might not need the most advanced statistical analysis to identify areas of your golf game that need the most attention.

You didn’t have to ace statistics to track golf stats

I don’t consider myself to be the smartest person in the room, but I have always been a hard worker. In college, I graduated in 4]four years playing competitive golf year round and managed a 3.5 GPA. However, one of the 2 “C”s I received in college was in — guess what — statistics!

I hated the class and simply just didn’t grasp it that well. I wasn’t much better with statistics on the golf course to be honest. I played collegiate golf in the early 90’s and while I’m sure some coaches were tracking detailed stats, ours was not. Of course, everyone was tracking scoring average, but they weren’t tracking all the individual stats that have now become common. When I turned professional I should have, would have, could have done a much better job of tracking my stats and analyzing my weak spots. If only I could turn back time.

In any case, golf statistics have evolved and exploded since then, and online stat trackers have popped up everywhere. Golfers and instructors are realizing the insights that any golfer can get from studying their stats from rounds of golf. I decided that instead of getting left behind, I better join the movement. So when my partners and I set out to create the MyGolfInstructor.com Game Tracker, we wanted to create a tool that anyone could use to easily track the stats they wanted, but more importantly, to give the golfer a detailed analysis of their game based on those stats. We wanted this not only to allow golfers to analyze their stats, but to have a tool whereby the instructor offers targeted analysis on those stats as well. In some cases, golfers see the stats they want to see, but an unbiased analysis of your golf stats can reveal even more opportunities for improvement. Use of the Game Tracker has helped me to improve my student’s games quicker and more efficiently than ever before. It’s not all about swing and mechanics anymore. It’s not all about mental game, physical fitness and equipment either. It’s about finding the really weak areas of the game first and attacking them from every angle. Numbers don’t lie.

When I started analyzing stats for the first time with rounds entered into our Game Tracker, I have to admit I was a bit overwhelmed. Where should I start with each student? What stat is the most important? Which part of the game should they try to improve first? It’s easy to get caught up in the usual stats: Putts, Fairways Hit and Greens in Regulation. After a couple of months though, I quickly became comfortable and efficient at being able to target the weak point on each card. I soon noticed an interesting trend.

The King of All Stats: First Putt Distance 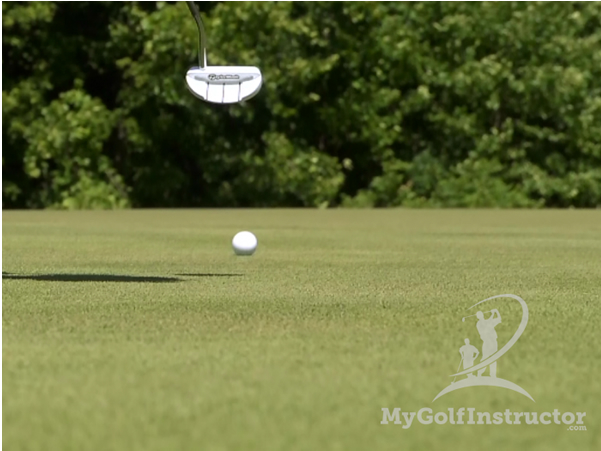 Your first putt distance is a crucial stat.

First Putt Distance is the key to so much information about a player’s game and it syncs up well with four other common stats:

Obviously, First Putt Distance tells us why a golfer’s putting average is high or low. If someone is always hitting their first putt from more than 20 feet, then I’m not surprised when they come in with putting rounds consistently averaging above 31 or 33 putts per round (the target I set for my students). If I know their first putt was from 30 feet and the putt they made was from 10, then I know their speed control stinks. You can see by the chart below pulled from our Game Tracker that the average first putt is a strong 15 feet. 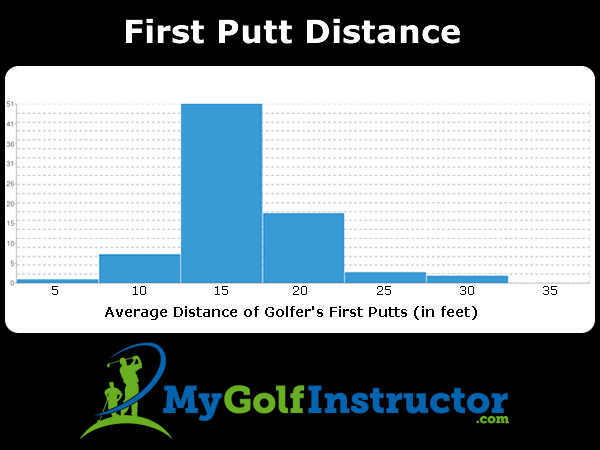 While this is way better than I would have guessed for most players, it still makes it difficult to make one putts and our stats show that most golfers rarely make their first putt. We know from Dave Pelz’ research that tour players make only 50 percent of their putts from 6 feet, so we know for the average player to leave a putt outside of 6 feet makes the chances of sinking it miniscule. As far as Made Putt Distance goes, this graph clearly shows that 3 feet is the range where the average player can sink a putt. 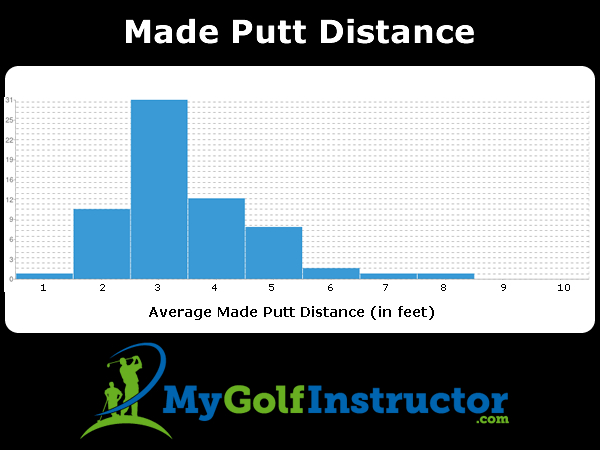 According to Dave Pelz, tour players make 92 percent of putts from this distance, so it makes sense that it would be an easier range for the everyday golfer as well.

First Putt Distance also tells me a lot about a golfer’s chipping skills. If I can see that a player had to chip on seven holes and then I’m able to look and see that their first putts are always outside of 10 feet, then I know we have a problem in the short game. As you can see by the chart below, the average number of chips per round is 10! This one was much higher than I thought it would be, but again it emphasizes how important skilled chipping is to lowering that First Putt Distance stat. 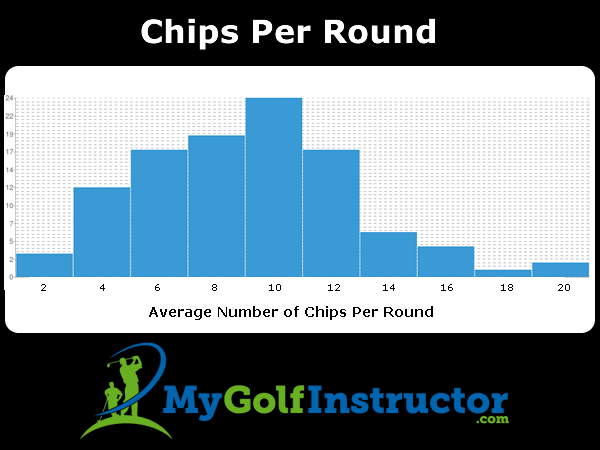 The other key stat that gives us a lot of information is approach club. Again, if their First Putt Distance is always 20+ feet, then I know they aren’t hitting the ball tight to the pin. This prompts me to see what clubs they are hitting that are leaving them with such long first putts, and then we have clubs to target with improved ball striking. Our research shows that the difference between a “good” golfer and an “average/bad” golfer when it comes to these numbers is that a “good” golfer does a lot better on approaches. Maybe they aren’t consistent with having the first putt on the green being a makeable distance, but frequently getting a good approach gives them a better chance at a one putt and less of a chance of three putting.

It’s easy to see that every golfer should chart their First Putt Distance, as it gives them great insight into how well they are putting, chipping and approaching the green. Unfortunately only 15 percent of golfers on the Game Tracker track this vital stat. It’s as simple as taking the time to walk off the length of your first putt while you are going through your pre-shot routine and lining up your putt. If you aren’t already, start tracking your First Putt Distance this summer and I promise you that you will quickly gain insight into what part of your game is really adding the strokes. Here is a link to our Game Tracker to help get you started.

Dynamic loft, angle of attack and your launch angle