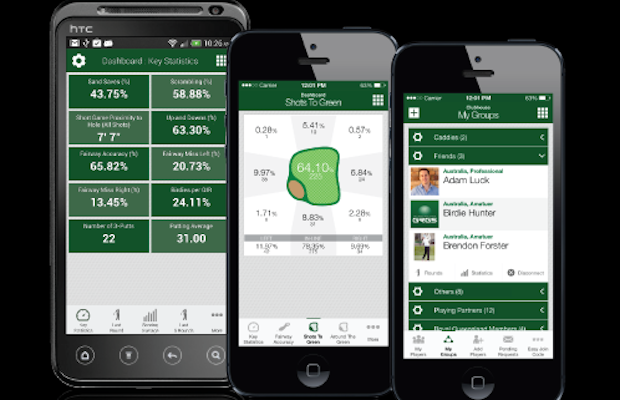 Josh Marris, CEO and Co-Founder of Get Real Golf Stats, has big plans for his company, with the statistical system to execute them.

Get Real Golf Stats (GRGS) is a platform that allows golfers to record their statistics in a widespread selection of categories, analyze them and compare or share their stats with friends, followers and PGA professionals. By filling in stats after or during a round through the app or website, players have access to over 200 statistics that go beyond just greens in regulation and fairways hit.

“I’ve tried other free apps and even bought apps that keep stats, but they just didn’t do everything I wanted,” Marris says. “I want to prepare myself like a PGA tour player, and [they] have access to very comprehensive stats. I grew tired of typing my stats into Excel and figuring out formulas to get my stats.”

The days of relying on Excel and self-developed formulas are over for him and other golfers with a similar desire to analyze their game. Three different memberships are offered depending on the golfers preference: a White membership, which includes two free rounds per month, a Gold membership, which is $32.99 per year and includes five rounds and increased statistical entry from White, or the Platinum, which is $99.99 per year and includes unlimited rounds and advanced entry that offers over 250 statistics per compilation. 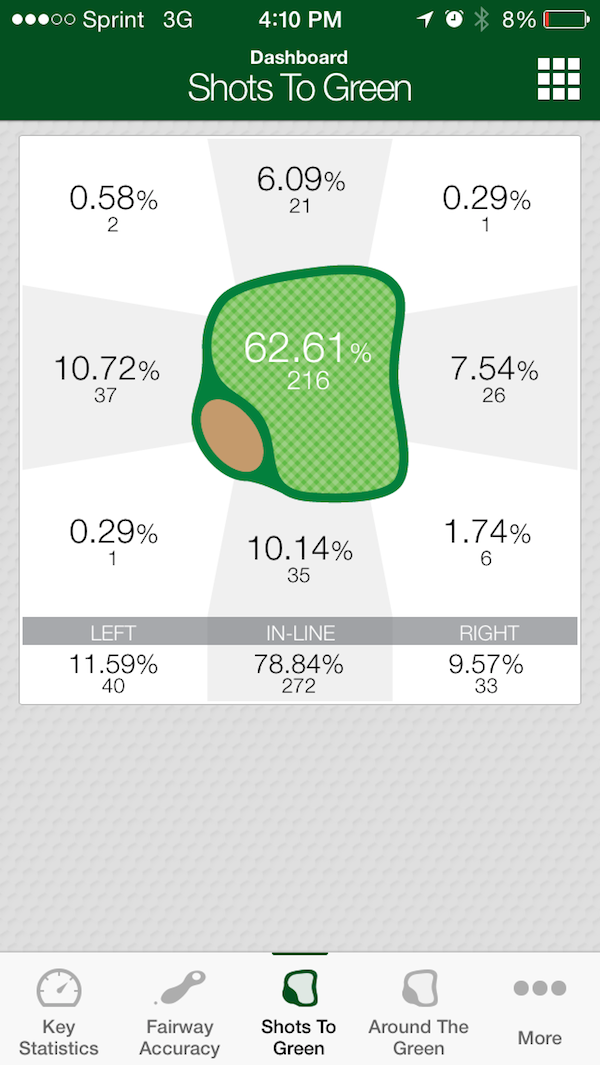 The GRGS app does provide information on Greens in Regulation, but it isn’t your everyday GIR percentages. Do you miss short, long, left or right most often? 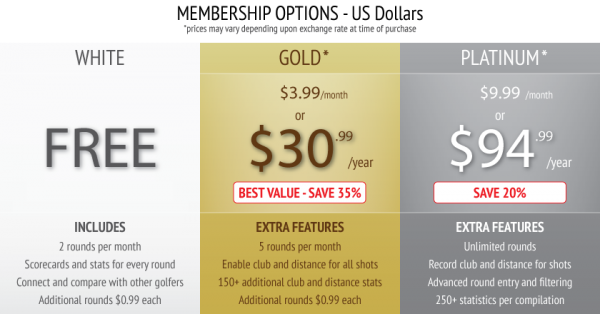 Why pay for a membership? Marris says that extremely thorough and instantaneous feedback from GRGS is what separates his company from the competition. Golfers now have access to the meaningful statistics that are available to the world’s best players, which could prove invaluable to golfers of all levels.

Based on its retrospective nature and interconnectivity, Marris says GRGS can become the “Facebook or Twitter of golf.” Golfers can customize their pages to include personal information, the clubs they use and the courses they play, all while connecting with other users of the system.

With endless capabilities of the platform, Marris hopes not only to improve the golf games of its users, but wants to change the game of golf for his native Australia and the world.

“We want to sponsor tournaments in Australia to provide opportunities for young Australian players,” he said. “We want to grow the game by giving it more exposure and get more people playing. We also want to duplicate that here in the States.” 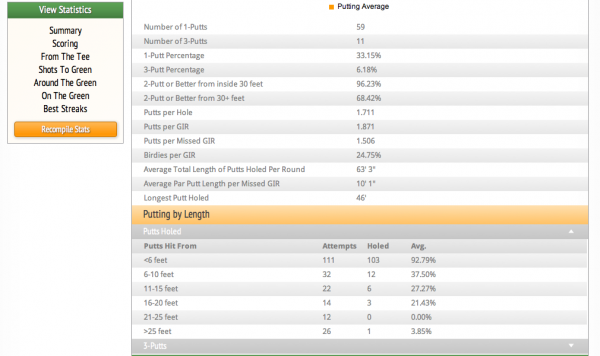 With “Putts Holed by Distance,” a feature that isn’t often seen from other apps and websites, GRGS allows golfers to break down putting performance based on distance and find their weaknesses.

Marris is a PGA of Australia member with experience as both a competitive golfer and instructor, but he was frustrated with the lack of opportunity to gain the competitive experience he wanted growing up in Australia. He moved to America in order to feed his competitive fire, and now wants to help grow the game back in his home country.

Through GRGS, he will have the opportunity to do just that. Although still in its adolescence with an estimated 3,000 current users, GRGS could have tremendous staying power because of its ease of use and endless capabilities.

“Golfers can share stats with their instructor or coach, meaning between lessons they won’t skip a beat,” Marris says. “It’s also a great recruiting tool. I had a young junior from Australia who was able to share his stats from more than 30 rounds during the recruiting process.”

GRGS can also be used to fuel competition between any group of golfers with a ranking system that ranks users in any category selected. This is also useful for high school or college teams, where the coach needs to make a decision on what players travel to tournaments and matches, or for other coaching purposes. The ranking feature is available on the website, and will be available for the iPad in the near future. 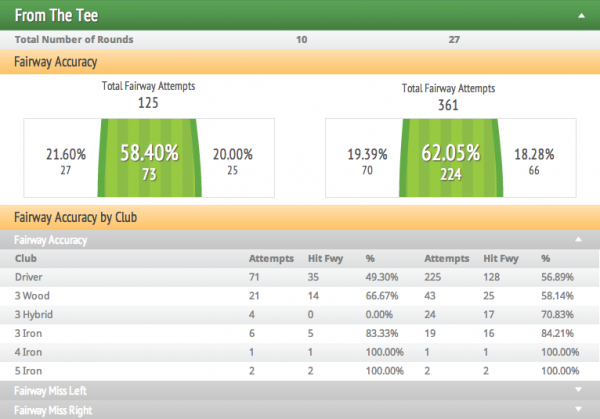 Players can get in-depth feedback about their own game, compare side-by-side to another player and see how they match up with friends, teammates or pros.

Another feature that will prove useful to golfers is the ability to track clubs and distance. By entering what club the player used, from how far and the shot results, players can track their tendencies from each yardage range with every club in the bag. This takes all the guess work out of identifying weaknesses and strengths, allowing players to more quickly begin working on a solution.

Golfers can also filter their rounds by particular course, most recent rounds, their last 5, 10, 20 rounds etc., or even more specific specifications such as morning or afternoon rounds, or breezy versus calm conditions. This provides tremendous feedback on personal trends based on conditions, time of the year and even time of the day.

Spend some time on GRGS’ website and you’ll realize it has the technology and the aptitude to justify Marris’ noble goals.

“What you need to know is our mission.” Marris says. “The reason I came to the States is that there just wasn’t enough opportunity to play in Australia. With what we’re doing here now, I want to change the game of golf for the better.” 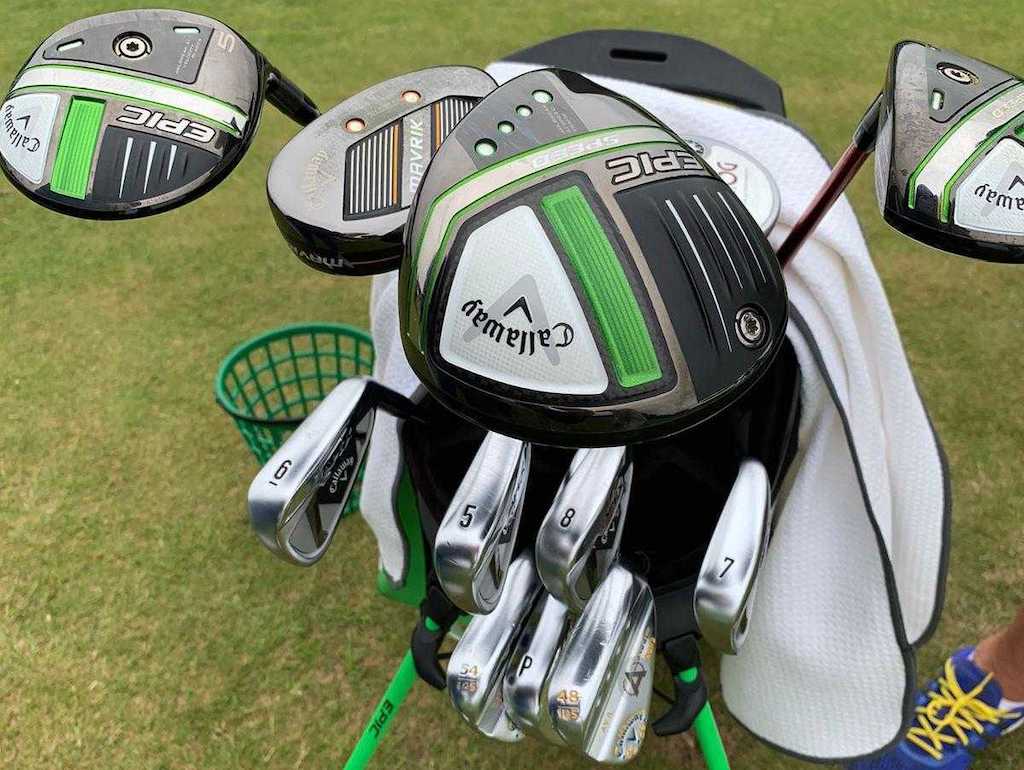 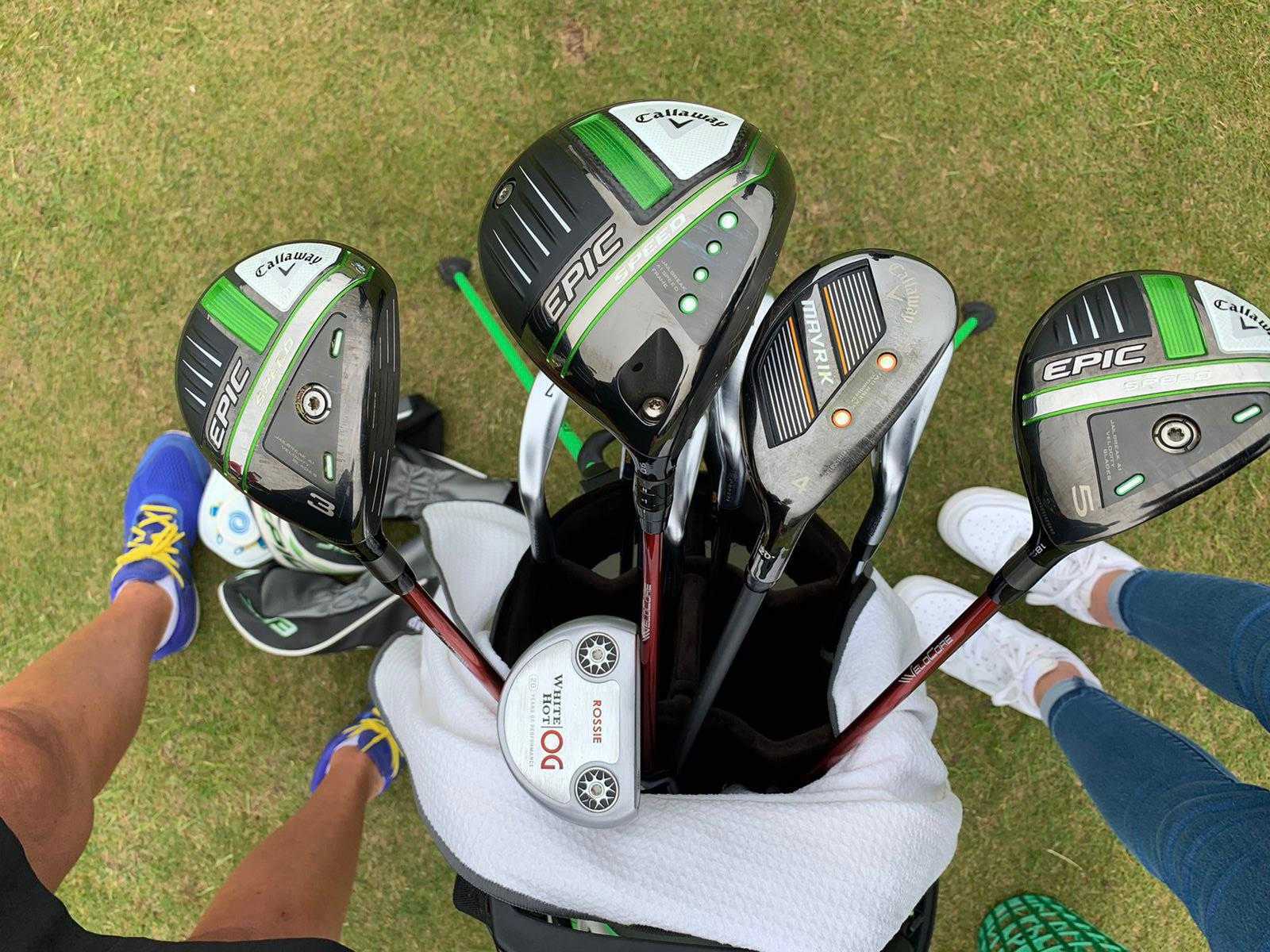 Thanks to SMS_on_Tour for the photos! 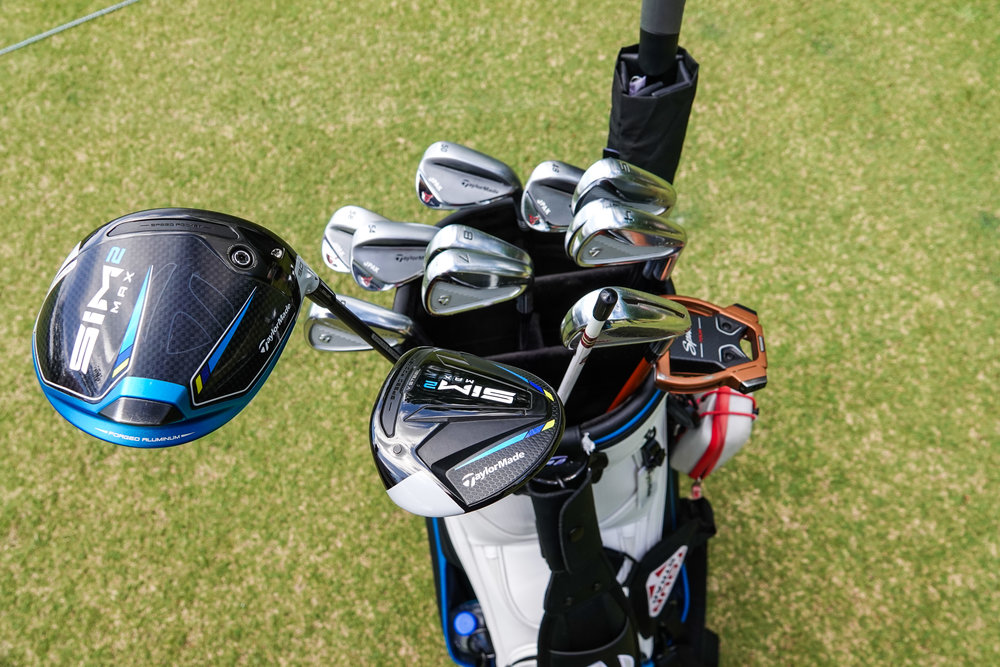 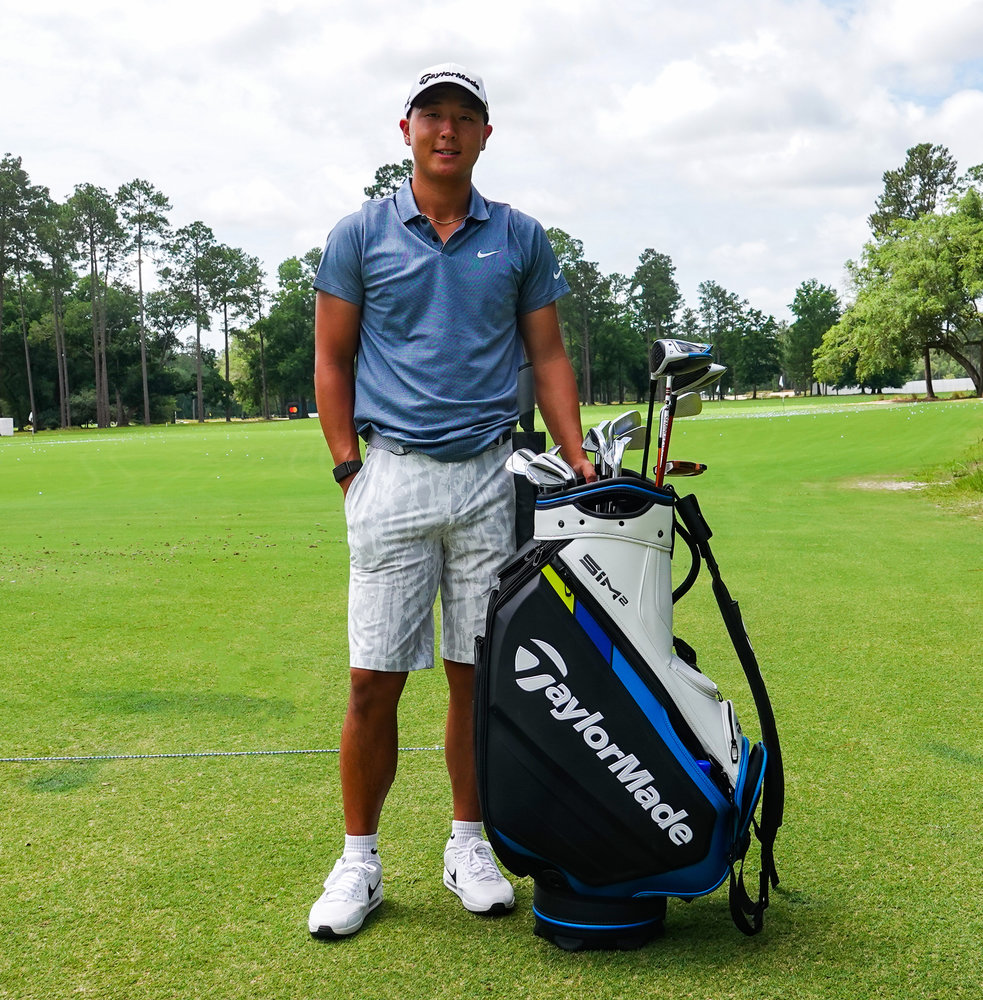 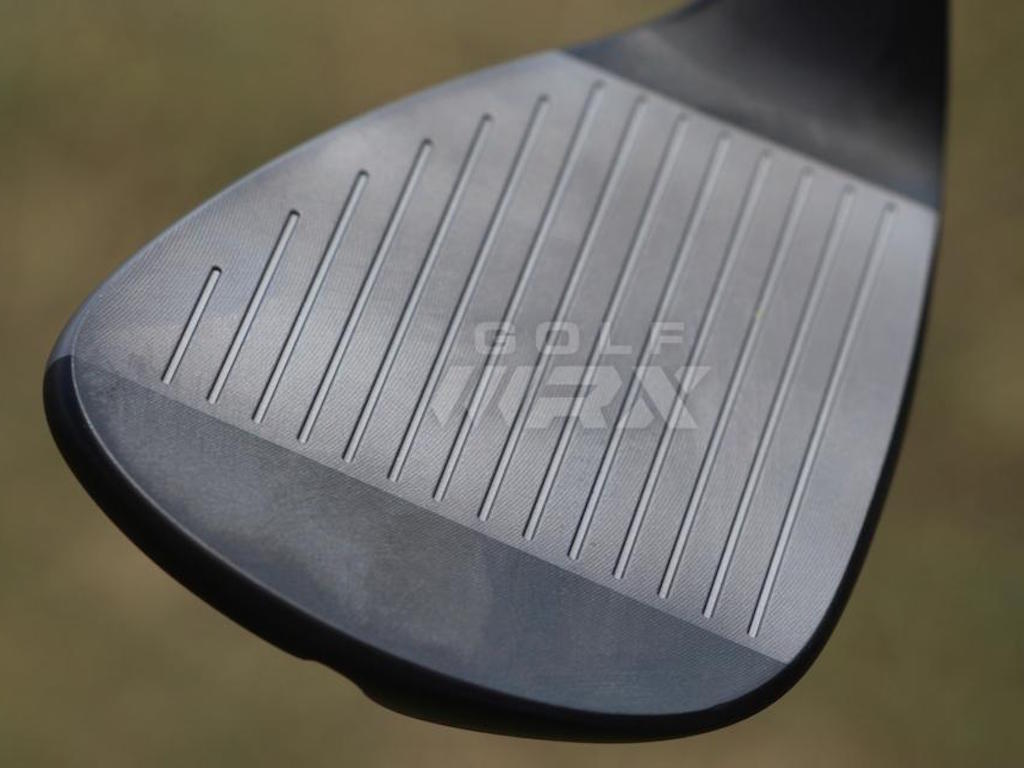 In our forums, our members have been discussing wedges. WRXer ‘Nev Adams’ is a left-handed golfer on the hunt for 3 new wedges and reaches out to our members who have been sharing their best ‘bang for your buck’ suggestions in our forum.