Costco, together with its Kirkland Signature brand, is one of the biggest forces in retail. Once again, it is disrupting the golf equipment space with the introduction of the company’s very first original golf club: the KS1 putter.

In an exclusive interview with GolfWRX, Tim Farmer, Costco vice president and general merchandise manager, dug into the details behind the putter. Farmer also spoke at great length about Costco’s other golf products, including the wildly popular Kirkland Signature four-piece golf ball and the current Kirkland three-piece urethane ball, which upon the time of publication has over 17,000 reviews and a 4.5/5 star rating.

First, some background on the Kirkland Signature brand, from Costco

“By taking the lead in sourcing and formulating new products, co-branding with premium national and international brands, and partnering with top manufacturers around the world, we’ve created an exclusive range of (Kirkland Signature) products that reflect our members’ tastes and exceed their expectations.”

The approach, from a Costco’s perspective, is to capitalize within a market where they believe an opportunity exists to be a price disruptor to other products currently available. The research includes talking with venders, working with Costco’s long list of approved suppliers, and visiting trade shows—including the PGA Merchandise Show. 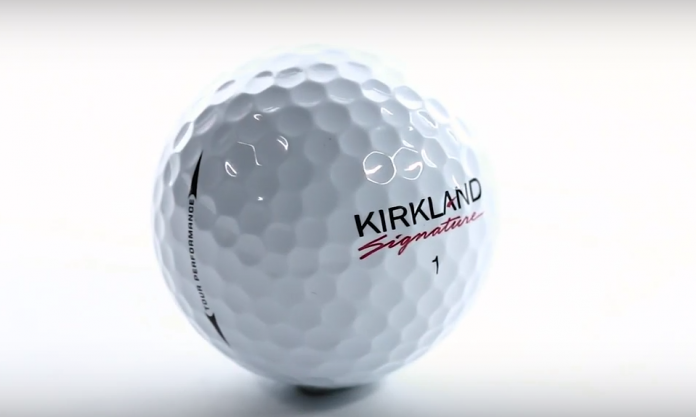 The original golf breakthrough came with the introduction of the Kirkland Signature Tour Performance four-piece ball in late 2016. The story goes, Costco was approached by a manufacturer with its own IP on a golf ball design and the opportunity to produce a ball under the Kirkland brand. Independent testing conducted by a third party and Costco’s own internal testing proved the four-piece ball offered exceptional performance. The ball was then approved and shortly after arrived in warehouses. “That’s when things went a little crazy,” says Farmer.

The price of $29.99 for two dozen four-piece urethane balls seemed too good to be true, but in the age of social media and launch monitors, golfers were buzzing, and the balls sold out almost immediately company-wide. Demand and buzz even created a secondary market where the golf balls were selling for 4-5 times their initial price including on eBay. Costco was both shocked and excited, and the ball became the proof of concept that its own line of golf products could be in high demand by members.

Considering the number of options Costco had for potentially producing a golf club, a putter was selected for its relative simplicity and the knowledge that of all the clubs in the bag, golfers love to experiment and test putters the most.

Farmer admitted that he, (a 9 handicap) along with a lot of other employees and members of the board of directors at Costco, are golf nuts themselves, and the putter was an exciting product to develop. It was an attractive product because the company knew it was a category where it could offer the best value and performance comparable to other products on the market.

The Costco buyers approached a well-respected manufacturer in China that also produces putters for a number of well-known OEMs to help develop the KS1. After working through initial prototypes and multiple designs, the wide-body plumbers neck was the final choice based on its popularity and mass appeal.

Farmer made the point that mass appeal is a huge part of the Costco merchandising philosophy because the average Costco Warehouse is 160,000 square feet, and at most, merchandises only 3,700 items per store. When you compare that to other big box stores of similar size, they could carry upwards of 120,000 different items. Fewer products create more value, which at the end of the day, is Costco’s biggest goal.

The specs of the putter clearly reflect the greatest opportunity to offer a club to the largest part of the bell curve for the best possible value. One of the interesting details from my conversation with Farmer concerned the reason the weight kit is being sold separately: “Research shows the majority of golfers don’t tinker with weights and settings of their clubs,” he said. “So to offer the best value, we are making it available online.”

It’s a smart decision that falls right in line with Costco’s directive to offer the greatest value while still creating options for members who are looking for something extra.

According to Farmer, the putter should become available online within the next couple of weeks. They don’t have an exact in-store date yet since pallets (how everything at Costco is moved around, stored, and merchandised) are currently in the process of being built and delivered—but expect to see them around three weeks from now.

The current plan is to have the putters in a select 80 stores to start with the potential to have them expand once the initial volume and sales data is analyzed. Like all things Costco, from mayonnaise to socks, every item has to earn its floor space. But if the putter sells anything like the golf ball, you can expect to see a potential second and third run.

Toward the end of my conversation with Farmer, the one question I had to ask is if other clubs and balls are on the horizon for Costco and the Kirkland Signature brand. I asked specifically about a rumored three-wedge set, and if they planned to update the current three-piece urethane ball.

Although Farmer was unable to provide specific details about any clubs beyond saying, “we are always working on new products that offer value to our members,” he was willing to say they are excited to see the reaction to the KS1 Putter. As for the three-piece golf ball, Costco is currently going through the testing phase for a potential replacement possibly by the end of the year.

When it comes to offering value, quality, and trust, there really is no other company in the entire consumer goods space that has the ability to deliver on a grand scale like Costco, and the Costco KS1 putter could be another game-changer for this constantly innovating retail giant.

What GolfWRXers are saying about PXG hybrids

The great bag debate, Part 3: Stand or no stand Tommy also swapped out his Srixon Z765 4 and 5-irons for two TaylorMade prototypes. The switch was in an effort to bridge the gap between his 5-wood and 4-iron. In past weeks, he had tested a TaylorMade SIM Max 4 Rescue. The switch required him to strengthen his 5-iron to gap properly, but ultimately that recipe wasn’t the right fit. More photos of Jason Day’s WITB in the forums.