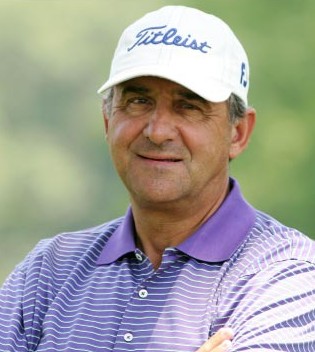 01 Believe you can win.
I still remember my first major, the 1985 city championship in Charlottesville, Va. Back then I didn’t play a lot of golf, but I wanted to see how good the players in my town were. I shot in the 80s and finished third from last. When I got done, I decided to follow the leaders so I could see how my game compared. After watching them for 18 holes, my evaluation was this: They hit it farther than I did. They hit it straighter. Their bunker play was fantastic. And they chipped and putted better. But I left there believing that if those guys could win, so could I. I worked on my game, and over time I got better, including one winter when all I did each day after work was hit bunker shots. Eight years after I first competed, I made a 12-foot putt on 18 to win my city championship.

02 Don’t be seduced by results.
How can Trevor Immelman get to the 18th green of the final round of the 2008 Masters and not know where he stands? It’s called staying in the present, and it’s a philosophy I teach all the players I work with. It means not allowing yourself to be seduced by a score or by winning until you run out of holes. Instead, you get lost in the process of executing each shot and accept the result.

Before Trevor teed off on Sunday with a two-shot lead, he decided he wouldn’t look at leader boards. He had a plan: Pick a target, visualize the shot and let it rip. As Trevor walked up the 18th fairway, Brandt Snedeker put his arm around him and nudged him to walk ahead. Trevor told me it was the first time all day he allowed himself to think about the outcome. After marking his ball, he asked his caddie how they were doing. His caddie said he had a three-stroke lead over Tiger. Trevor said he went from being quiet and calm inside to thinking, How can I not five-putt this?

03 Sulking won’t get you anything.
The worst thing you can do for your prospects of winning is to get down when things don’t go well. If you start feeling sorry for yourself or thinking the golf gods are conspiring against you, you’re not focused on the next shot. When Padraig Harrington won the British Open in 2007, he got up and down for a double-bogey 6 on the last hole to make a playoff after knocking two balls into the water. Padraig told me he had a level of acceptance that earlier in his career he didn’t have. He said it never entered his mind that he might blow the tournament. His only thought was getting his ball in the hole so he could win the playoff.

04 Beat them with patience.
Every time you have the urge to make an aggressive play, go with the more conservative one. You’ll always be OK. In a tournament, the rough is thicker, the pins are tougher, and the greens are faster. The moment you get impatient, bad things happen.

The best example of patience I ever witnessed was Tom Kite at the 1992 U.S. Open at Pebble Beach. Kite had been 0 for 20 in U.S. Opens until then. On Sunday, wind gusts reached 35 miles per hour, but Kite didn’t get flustered. On a day when a lot of players didn’t break 80, Kite shot even par and won by two. In tough conditions, stay patient and let others beat themselves.

05 Ignore unsolicited swing advice.
Not too long ago, I was working with this player who was struggling. But a couple of strong finishes had him feeling better. At the next tournament he makes, like, eight birdies in the first round. Now he’s feeling really good. He stops by the putting green to hit a few, and a player he knows walks up to him and says: “I don’t know what you’re doing with your putting, but that’s not the way you used to set up.” A few minutes later another player comes over: “You don’t have your eyes over the ball the way you used to.” Now my guy doesn’t know what to think. He went from making everything he looked at to being a mess the next day.

You’ll have lots of well-meaning friends who want to give you advice. Don’t accept it. In fact, stop them before they can say a word. Their comments will creep into your mind when you’re on the course. If you’ve worked on your game, commit to the plan and stay confident.

06 Embrace your golf personality.
Some players like Anthony Kim love to socialize on the course. Others like Retief Goosen keep to themselves. The key is to find what works best for you. The toughest player, mentally and emotionally, I’ve ever worked with is Pat Bradley, the LPGA Tour Hall of Famer. She was like Ben Hogan — she didn’t talk to anybody when she played. She told me she didn’t have time to chat with players because she had an ongoing dialogue with herself. I still remember the day she called to tell me she was done. She’d been on the range before a tournament giving tips to other players. Later, on the first few holes, she found herself chitchatting with her playing partners. “I can’t play golf this way,” she told me. “I’m done. I’ve accomplished everything I wanted to accomplish.”

07 Have a routine to lean on.
I tell players to follow a mental and physical routine on every shot. It keeps you focused on what you have to do, and when the pressure is on, it helps you manage your nerves. A pre-shot routine helped Curtis Strange win his first U.S. Open, in 1988. Afterward he went home and watched the tape with his wife and kids. He told me they kept commenting on how cool and calm he looked. Curtis said to me: “I’m thinking, Who in the world are they talking about? They can’t be talking about me. I couldn’t get any moisture in my mouth. My heart was jumping out of my chest.” Curtis said he had so much emotion in his body it was unbelievable. He was working his tail off just to stay in the present, hit one shot at a time and not think about what it would mean to win the U.S. Open.

‘It’s easy to build up a tournament into something so huge that you can’t play.’

08 Find peace on the course.
When you practice hard and admit to yourself that you really want to win, it’s easy to build up a tournament into something so huge that you can’t play. I’ve seen amateurs not used to competing arrive two hours before their tee time and try to rebuild their golf swings. They become panicked practicers and try to perfect every area of their game. They get themselves so tied up in knots it’s ridiculous. Tour players do this, too. I’ve seen guys come to Augusta, rent a big house and invite their family and friends. When Thursday comes around, they start worrying: What if I miss the cut and disappoint everyone? The golf course has to be your sanctuary, the thing you love, and you can’t be afraid of messing up.

10 Find someone who believes in you.
The greatest thing I’ve got going for me is my ability to believe in other people’s talents. I can see people doing things they can’t see themselves doing. Every champion needs that. Hogan once told me he considered quitting the game several times early in his career because he didn’t think he was providing for his wife the way he should. But Valerie wouldn’t let him quit. She knew he’d never be satisfied until he won majors. Having confidence in yourself is important, but it helps to have someone who believes in you, too, whether it’s a spouse, a friend, a teacher, or even a sport psychologist.