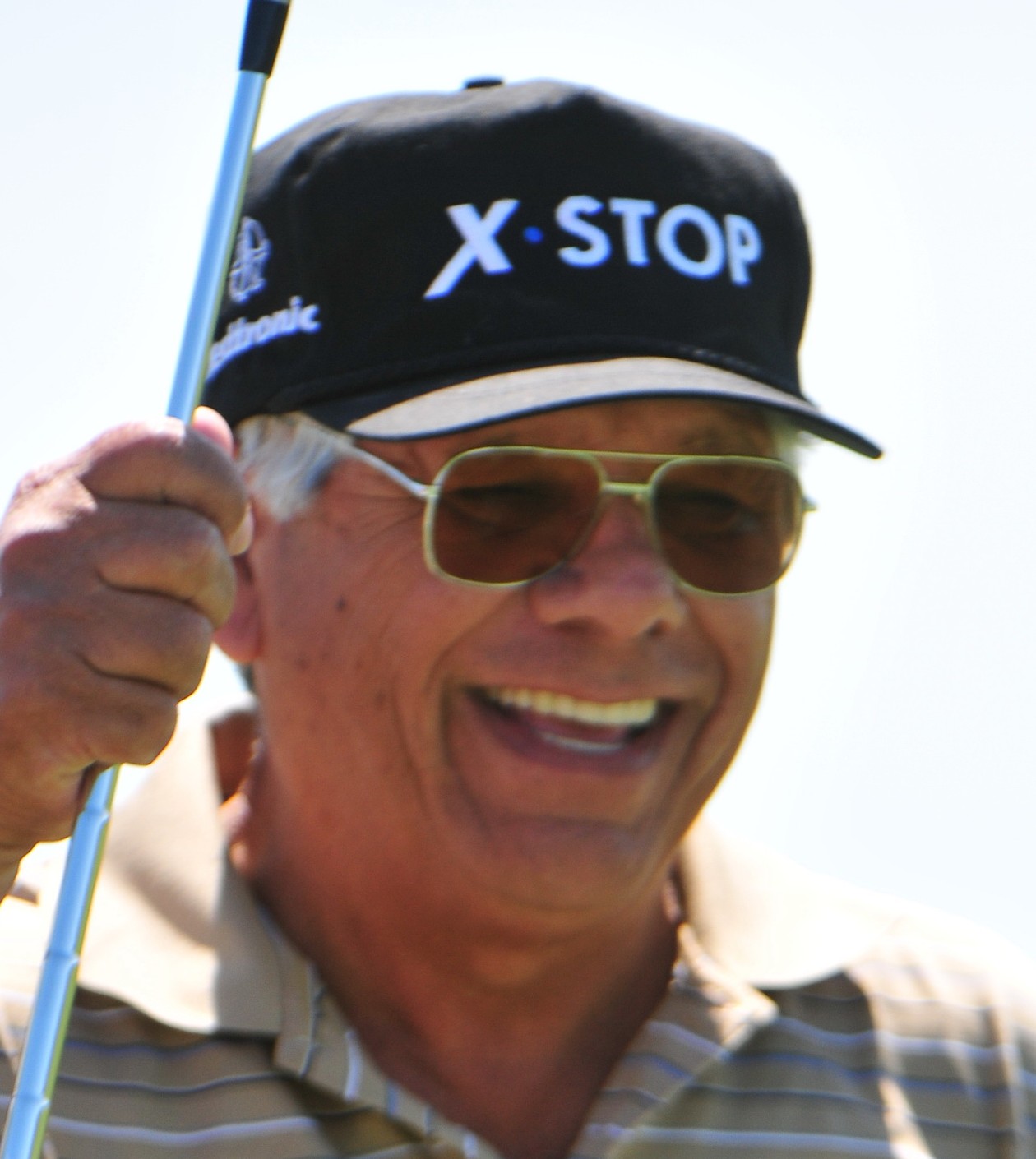 01 The easiest shot is the best shot.
Chi Chi Rodriguez had as good a pair of hands as anybody I ever saw, and more shots than you can imagine. But Chi Chi had a habit of turning simple shots into difficult ones. If he had 140 yards from the middle of the fairway, he would deliberately hit a low hook or a high fade, just for his own amusement or to please the fans. He needed the stimulation, I guess, but it worked against him. Remember, the goal is to get the ball from Point A to Point B in as straightforward a manner as you can. Don’t try circus shots unless you absolutely have to.

02 Simplify draws and fades.
Jack Nicklaus liked to curve the ball by opening or closing the clubface at address. I never felt I was good enough to do it his way. I didn’t like changing my swing path, either, which some guys do. There’s only one really reliable way to curve the ball: Change your hand position at address. If you want to hit a draw, move your hands forward, toward the target, so they hide your left shoe when you look down. Make sure the clubface is square to the target, and then make your normal swing. When you get to impact, your hands will naturally be farther back than that exaggerated position they started in. When the hands move backward, the clubface closes. You don’t have to do anything. To hit a fade, do the opposite: Set up with your hands back, behind the ball. At impact they’ll be more forward, and the face slightly open.

03 Let the club do your shotmaking.
Before the 1987 Skins Game at PGA West, I visited the TaylorMade plant and saw an odd-looking little metal wood in a barrel. It had the number 7 stamped on it, which got my attention because 7-woods were unheard of. “It’s a prototype,” their man said. “Not for sale.” He offered to let me take it home, though. That little club turned out to be the best stick I ever had. I could hit it high or low, draw or fade it, hit it 165 yards or 210, all with barely changing my swing. After I hit a 190-yard fairway-bunker shot over water to five feet on the ninth hole at that Skins Game—a shot I couldn’t possibly have played with an iron—my phone wouldn’t stop ringing. Everybody wanted to know where to get a club like mine. The equipment choices today are even better, with all kinds of hybrid and fairway-wood designs. My point is, there’s no sense trying to squeeze something out of your swing if you can let your clubs do the shotmaking for you.

04 To hit it low, crowd the ball.
I always loved hitting a low fade to a back-right pin with the wind howling from the right. Not many guys could get it close in that situation, because they kept it low by just putting the ball back in their stance. You see, playing the ball back turns you into a one-trick pony—you can only hit hooks. The best way to hit it low—and I’ve never talked about this before—is to stand closer to the ball. Flex your knees and crowd the ball so your hands are only a couple inches from your body. You’ll get the feeling that you’re going to hit a shank, so you’ll instinctively straighten your legs and raise your upper body through impact. When you stand up like that, your hands tend to get ahead of the clubhead, delofting the face and setting up a low cut. If this sounds complicated, read it again—it’s worth it. As for hitting it high, the thing that worked best for me was to play the ball forward and make sure I kept my head as far behind the ball as possible through impact. But keep in mind, this is coming from a low-ball hitter.

05 Don’t choke down.
I love watching Anthony Kim play, but I’m not a fan of the way he grips down a good two inches on his full-swing shots. Choking down lightens the club’s swingweight and effectively makes the shaft stiffer. It also makes it difficult to hit the ball high enough for all situations. But the worst thing is, it gets you into the habit of hitting every shot with 100-percent effort: Instead of hitting a smooth 7-iron with a normal grip, the player who chokes down tends to shorten the 7-iron and hammer the hell out of it. I like the idea of gripping down on chips and pitches, because it can give you more control, but avoid doing it with anything longer than a 9-iron.

06 Learn to beat the fluffy lie.
Besides the long bunker shot, the hardest shot in golf is the 80-yard wedge from light rough. The ball has a tendency to “dip,” or fall out of the sky, because it has so little backspin coming out of that lie. How much it dips depends on the exact lie, your swing speed, the wedge you’re using and the swing you make. If you don’t judge those things right, the ball will fly anywhere from five to 20 yards short of normal and with no spin—that means a lot of balls bouncing over or falling short. Learn the nuances of the fluffy lie, and tailor your swing to fit it. This is really the essence of shotmaking: having a good idea how the ball will behave coming out of all the various situations. Take another good one: mud on the ball. From my experience, taking two clubs more and hitting it hard often works. You’ll probably knock the mud off, but then again, it depends on how much mud you’re talking about. You learn those things only by trying them yourself.

07 Don’t invent shots from trouble.
Seve Ballesteros was the best trouble-shot player who ever lived. It didn’t matter how far in the woods you put that guy, he’d find a way to get out. But Seve inadvertently put a lot of big numbers on the scorecards of average players, because he inspired them to take dumb chances. When your ball is in trouble, the desire to save par can really warp your judgment. That opening in the trees is smaller than what you see, the lie worse, the odds of pulling off the shot perfectly much smaller than you probably imagine. Trouble shots usually require you to do something crazy with shot trajectory, and that’s a guessing game even for the best pros. Keep in mind, the trouble shot you’re about to try is a make-or-break deal. You have only one shot at it, and the consequences are more disastrous than on a shot from the fairway. Seve might have played poker when he was in trouble, but the average guy should stick to checkers. Take the shortest route back to short grass, and move on.

08 Weaken a strong grip.
Changing from a strong grip to a neutral or slightly weak one takes time and is not easy, but it’s a great way to become a versatile player. I played in a tournament with Ben Hogan toward the end of his career, around 1970, and even then there wasn’t a shot he couldn’t hit with ease. Mostly he hit the ball dead straight, but he could play all kinds of little squeeze fades and low hooks. What made Ben great was his slightly weak grip, both hands rotated counterclockwise so the “Vs” formed by his thumbs and forefingers pointed at his right ear at address. Shotmaking-wise, it gave him tremendous control. To draw the ball, he just released the club a little more. To hit it straight, he released a little less, and to fade it, he didn’t do anything. You can play good golf with a strong grip; Paul Azinger, David Duval and I are proof of that. But none of us is known for drawing the ball. When we tried, we hit too many duck hooks.

09 Get creative with the putter, too.
You want to make the same stroke on most putts, but sometimes it pays to customize it. If you’ve got a quick downhill putt, hover the putterhead off the ground at address. This will smooth out a short stroke and take away any urge to stab at the ball. On long uphill putts, address the ball out on the toe, because with a longer stroke you’ll tend to hit the ball closer to the heel than where you set it at address. Right-to-left putts: Put the ball back in your stance to catch it earlier in the stroke, when the putter is still moving outward and the face is open. Left-to-right putts: Lean your hands down the target line in an exaggerated forward press. As with full swings, this will help you close the face through impact.

10 Don’t overload your pet club.
Remember the 7-wood I told you about? The ending isn’t happy. At the 1991 Senior Players Championship, I had a chance to catch the leader, Jim Albus, with two holes to play. On the par-5 17th my drive left me 215 yards to a green fronted by water. It was on the outside limit of my little 7-wood, and my caddie, Herman Mitchell, wanted me to lay up. “Mr. Albus has never won a tournament, Lee,” Herman said, hinting that maybe Jim might choke if I played safe. But I loved that club so much I knew I could pull the shot off. I hit the 7-wood and just nailed it. I was still posing my finish when my ball bounced off the bulkhead in front of the green and into the water. I had so much confidence in that 7-wood, it made me greedy. Be careful with your pet club. If you expect too much of it, it’ll turn on you.

How to make six-footers: 10 Rules From Dave Stockton