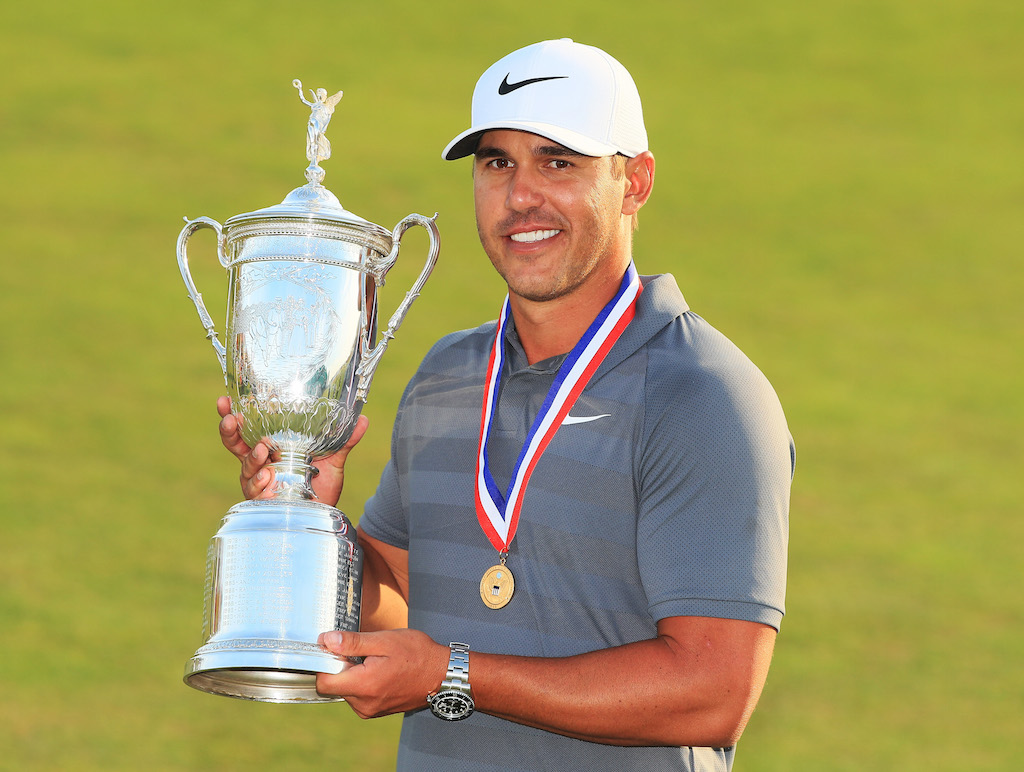 Opportunity knocked for so many golfers, yet it was the 2017 champion who seized the moment when it was his. Brooks Koepka fired his second sub-par round of the week on Sunday to separate from playing partner Dustin Johnson, and enter the pantheon of multiple major champions. He became the 7th player to defend his title, joining old-school legends like Willie Anderson and John McDermott, mid-century icons like Ralph Guldahl and Ben Hogan, and the last man to accomplish the feat, Curtis Strange. With that introduction, let’s move to the main event, the 5 things we learned on Sunday at Shinnecock Hills.

5) The USGA gave golf a chance

True to its word, the USGA pulled out all the stops in the wee hours of Sunday morn. The course set-up team ensured that enough water was distributed to putting surfaces, that worthy shots would not be punished. Hole locations were assessed and confirmed, also ensuring that multiple opportunities for success were available. As a result, 15 golfers turned in scores under par of 70, highlighted by Tommy Fleetwood’s 7-under stunner. Although many fans, writers and players were quick to assault the organizers for losing control of the course, the USGA reminded us that it always had control of the conditions at Shinny, and that its only mistake was to soar too close to the sun.

As the leaders start to make their way onto the golf course, here's the standard that was set today. @RickieFowler's 65 in less than two minutes. #USOpen pic.twitter.com/X5iS9iREPG

4) Captain America ran out of gas

If Patrick Reed had been able to sign his card on the 9th tee, when he stood 5-under on the day and 1-over for the tournament, he would be in a playoff with the eventual champion as I type. Unfortunate for this year’s Masters champion was that 10 holes remained. Reed promptly bogeyed the 9th, added 3 more bogeys on the inward half, and summoned just one birdie toward the end. His fourth-place finish was his best in a U.S. Open, but knowing that victory was in the cards will sting for a while.

Patrick Reed is really, really good. He also got a little lucky with the flagstick here. #USOpen pic.twitter.com/0bCBaHsPoZ

Where to begin? How about this: DJ had four bogeys on Sunday. He totaled that many on Thursday-Friday combined. He had birdies, too, but couldn’t find the game that possessed him over the opening 36 holes. Oddly enough, this type of experience won’t be a setback for the 2016 champion. After all, he came back from a career-killer in 2015, when he 3-whacked his way out of a playoff with Jordan Spieth at Chambers Bay. As for Milton Pouhau Finau, aka Tony, the Utah native had never before been in the final group on any day of a major professional championship. He acquitted himself well, standing even on the day and 3-over for T2 at the 18th tee. Knowing that he needed eagle for a playoff might have taken the final winds from his sails, and he limped home with double bogey and solo third. Looking ahead to the final August playing of the PGA Championship, Bellerive near St. Louis might just be his type of course.

.@tonyfinaugolf is starting to heat up! That's 3 birdies in the last 4 holes for Finau. #USOpen pic.twitter.com/ztbEroCXTh

2) Tom Terrific nearly made his own U.S. Open history

I’ll write this cautiously, as I’m certain I would have intimated in the 1980s and 90s that Colin Montgomerie and Lee Westwood would have been major champions by now. Tommy Fleetwood ought to win one of these things soon. His record-tying 63 was a short putt away from a record-breaking 62. Eight birdies against a single bogey was the stuff of legend, and if only he had trusted that final putt a bit higher on the break … that’s not fair. Fleetwood right now is the fellow to watch at Carnoustie next month. Bet a few quid or bob or whatever on the Southport native, as he should contend for the title.

1) Brooks cooks up a winning broth

It’s easy to look back and see all the great shots that the defending champion hit over the four days of the 2018 U.S. Open, shots that would win him his second consecutive trophy. Remember that 60-feet bomb to save par on Saturday? Shades of Costantino Rocca. How about the approach shots to within mere feet that earned him 5 birdies on Sunday, including a competition-killer on 16? Koepka was the guy we thought Dustin Johnson would be. Perhaps it was the time off for wrist rehabilitation early this season that gave him the burning desire to win. Out for nearly 4 months, Koepka had plenty of time to ponder what he achieved last June in Wisconsin, and what might lay ahead for him. The begged question is, does the most recent, two-time major winner have the game to acquire more of the game’s cherished trophies?

Oh my @BKoepka! This guy is throwing darts today! He extends his lead to two strokes with two holes to play. #USOpen pic.twitter.com/hyKQJHa3rz