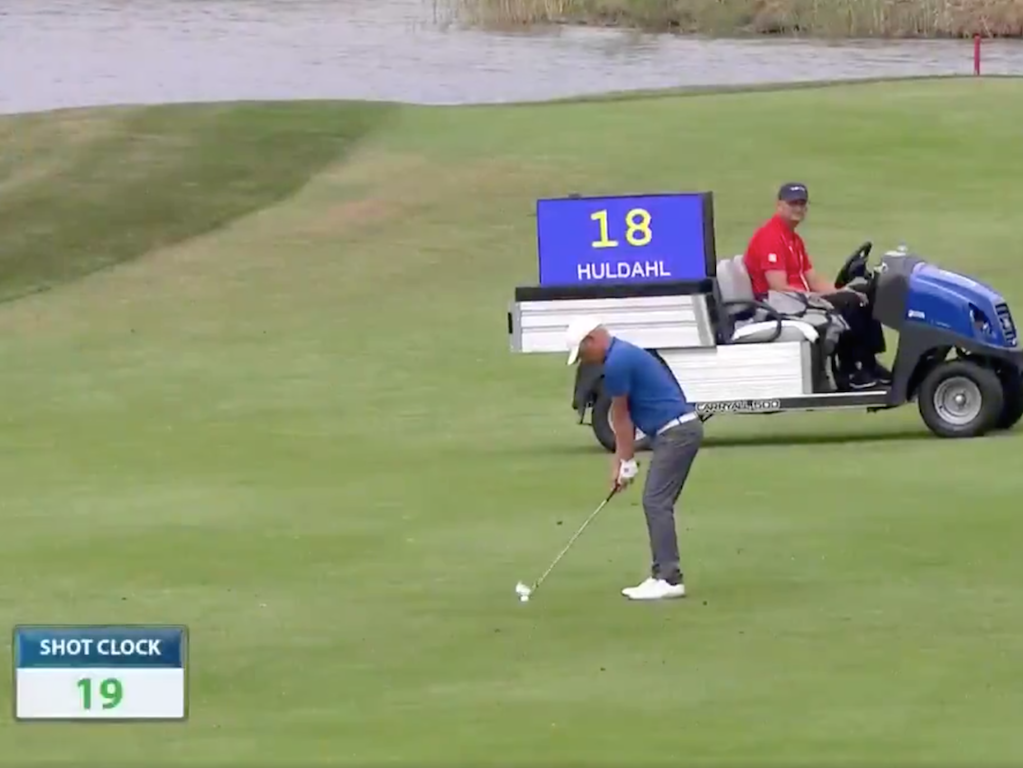 It borders on comical to suggest that Dustin Johnson, or anyone, is the favorite for this week’s U.S. Open at Shinnecock Hills. That course is played in competition once every dozen years, and its presentation changes from decade to decade. The only guarantees are an interesting tournament and a grateful winner. For now, that’s enough. We have tournaments to run down, beginning with Johnson’s win in Memphis. He wasn’t the only winner during this first, full week of June, but his conclusion was the most exciting, without doubt.

Voted Best Guy To Hole Out On 18 he might not be, but Dustin Johnson calmed his way past the closing eagle on Sunday to win by 6 over pugnacious Andrew Putnam. Johnson smiled his trademark half-moon, waved laconically, and eased closer to XX victories. After posting the second-low round for 3 consecutive days, Johnson’s margin of victory was trebled with his 171-yard hole-out at the 72nd green. The tall & bearded one’s overnight tie was broken when Putnam doubled the first hole to drop back. The runner-up gave another shot back, 3 holes later, before steadying the nerves somewhat with a birdie at the 7th. Putnam concluded his day with 11 consecutive pars, allowing Johnson the freedom to play (how else?) casually in. J.B. Holmes had birdies at 15 & 16, to close with 67 and ascend to a third place finish, 4 back of Putnam. With the victory, the regular PGA Tour takes a week-long break as the USGA’s national men’s open championship takes center stage

Korhonen avoids the Clock-Keeper on way to 6-stroke triumph

In the first-ever, clocked event on a major professional tour, Finland’s Mikko Korhonen played 4 rounds in the 60s to emerge with a six-stroke win over Scotland’s Connor Syme. While Korhonen and Syme were tending to business as usual, the European Tour began a crackdown on the snails of the golfing world. Allotted-time imits were established at week’s start, and four penalties were assessed for laggards. Clemens Prader was the worst of the transgressors, taking a full 4 extra seconds to hit a putt at the 6th, in round 3. Grant Forrest, Markus Brier and Oscar Stark were also gifted with extra strokes on the week, thanks to their pause. Back to the golf-Korhonen began the week with 62, bogey-free holes, posting 16 birdies along the way. He wobbled with 2 mid-round bogeys on day four, but had enough petrol in the tank to lock up his 1st Euro Tour title. Syme made an absolute bomb of a putt at the par-3 closer to separate from a quartet at 9-under, and claim solo second for himself. For his efforts, Syme earned 2 of the week’s Best Shots, as seen below.

It's the five best shots from last week. pic.twitter.com/rbNRAJVxR8

Annie Park might be forgiven for thinking that a final-round 63 would give her the kind of walk in the park that Johnson and Korhonen (see above) enjoyed on Sunday. Neither lad had a Sakura 61 in his field, however, as did Park. The Long island native signed for 6 birdies and 1 eagle in round 3, which were enough to keep Sakura Yokomine at bay, and earn her first Tour title. The Japanese golfer made eagle at the third, then piled 8 more birdies into her kettle, to finish the day at 10-under, 15-under for the week, one behind Park. Also in the mix was yet-to-win Marina Alex, the tour’s Jersey Girl and Vanderbilt alumna. Alex aced the 17th hole, to counteract a 14th hole bogey, and post 64 for 14-under and solo third. It was her second top-3 finish of the season, and certainly buoys her spirits as summer arrives en force.

She's 13-under, 3 shots off the lead @ShopRiteLPGA. Watch now on @GolfChannel! pic.twitter.com/VQIl4jQngi

Kyle Jones and Christian Brand were hoping to hoist a trophy at day’s end; instead, Chase Wright and Alex Prugh did battle in extra holes for the RustOleum Championship title. Jones and Brand fell back early, victims of not enough birdies on a day when the little warblers were a necessary commodity. Wright had 4 in regulation, plus another on the 2nd playoff hole, to claim an inaugural Web.Com tour victory. Prugh had 7 birdies on the day, but 2 bogeys were enough to keep him from outright victory. After finishing at 17-under, 1 clear of Brand, the two combatants played the finishing hole twice. On the 2nd go-round, Wright was able to convert his birdie putt and ascend to the podium’s top spot.

An opportunity that you spend your life preparing for.

Fifteen months ago, Tom Lehman secured his 10th Champions Tour victory. On Saturday, the Minnesota native overcame a week of weather disruption and hot pursuit to earn win No. 11, by 2 strokes over Scott Parel, Glen Day, Woody Austin and Bernhard Langer. Why Saturday? Sunday’s final round was cancelled by extreme weather, leaving Lehman as the title holder. He had established a 3-shot cushion by the time he arrived at the 18th tee, so he took his time playing the last in 5 bogey strokes. In any other circumstance, Lehman might have been irked. In this case, he suffered not a bit for the final-hole faux pas. Austin closed with 4 consecutive birdies to jump into the 2nd-place quartet, while Langer could not approximate his opening 64 on Sunday. 2 too many bogeys dropped him out of the top spot. With the cup in his grasp, Lehman moved up 10 spots, into 10th position, in the season-long Schwab Cup race. Langer reclaimed the top spot with his runner-up finish, after dropping behind last week’s winner, Paul Broadhurst, for 7 days.

Tom Lehman jumped ahead on Saturday at the @PCCTourney, and holds a two-shot lead heading into Sunday. pic.twitter.com/bKOLPQuqJt