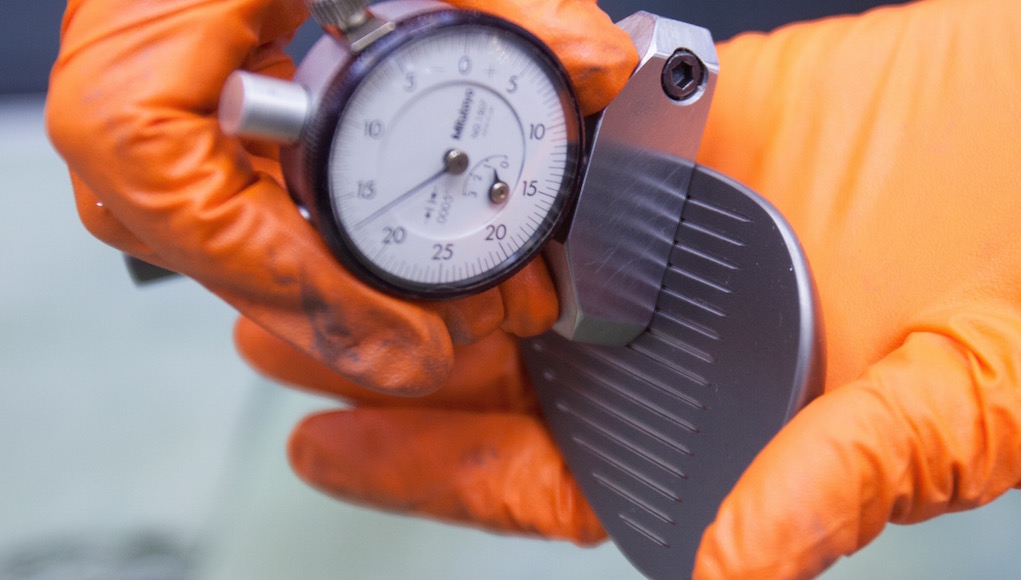 Ever wonder: What’s the difference between my wedges and the ones used on the PGA Tour? The DNA is identical, but the actual clubs on tour are normally unique to each player.

More than any other type of club, the modern wedge was borne of and by the best professional golfers in the world. Its place in design results from the demands and navigation of the most difficult competitions and courses. But the obvious question of whether “tour wedges” are necessary or even suitable for average golfers may help shed light on our clubs in everyday use.

Commercially available, or “stock” wedges, are sold as essentially the same tools that tour professionals use, however, professional golfers have customized their wedges forever. Tour heads are naturally heavier to allow for the extra shaping. Players grind them to their liking in terms of sole, head shape and leading edge shapes. Generally, measurements have less importance than how the club looks or how the wedge works with their game. Specifications get recorded after modifications have been made. Manufacturers use the tour prototypes to share with the public the same basic equipment as the best players in the world use, but often the modified “one-off” clubs aren’t exactly the same as the final products found on the shelves.

At the heart of the matter: THE BOUNCE, or the angle of the sole plane relative to the ground plane, has always been a source of disagreement and debate. It used to be a widely held belief that tour players used wedges with extremely low bounce values. The perception was that the better the player, the less bounce was required and vice versa. While that may have been true in a few limited cases, normally clubs with low bounce angles had wider soles. Another way of saying that is the distance from the leading edge to the trailing edge was longer. 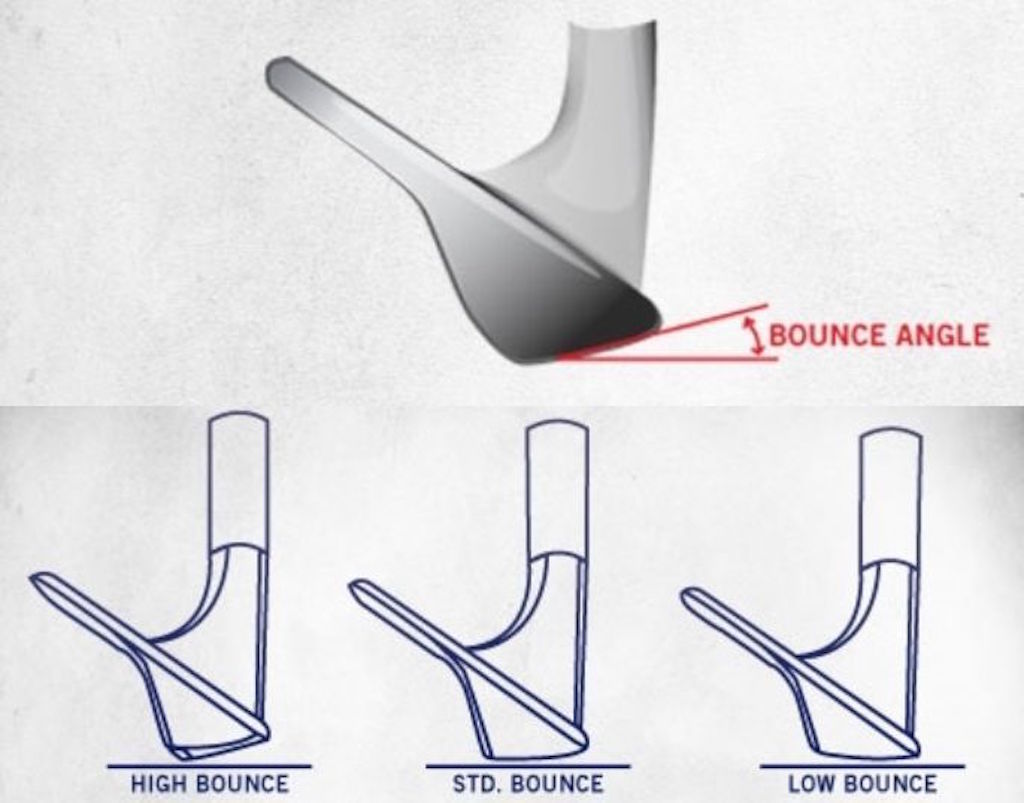 A wider sole acts like it has more bounce, and it does when the player opens the face. The leading edge of the club lifts higher off the ground when the sole is wider, acting like extra bounce. Another wedge contour called “camber,” the roundness of the sole from the leading edge to the back of the sole, can substitute for additional bounce.

Whether genius or completely misguided, wedge manufacturers regularly published bounce values that were substantially different from the absolute values found on the clubs themselves. Even as recent as 1998, conventional wisdom regarding the amount of bounce used by PGA Tour players in so-called lob wedges was about 3 degrees. We now know that this was laughable. Better players are steeper… yes? So why would they use wedges with knife-like leading edges and soles? They wouldn’t with the exceptions of a few very rare cases. It turned out to be urban legend.

Typically, a very low bounce angle would incorporate a wider sole and more camber (roundness) to counter the effects of a flatter bounce angle. Wider soles act like added bounce, especially with an open face. These features are commonly found in so-called “game improvement” wedges for average golfers like Callaway’s Sure Out or the XE-1… you know, the one from the infomercial on Golf Channel.

Early on in my career at Cleveland Golf (I worked for Cleveland as The Senior Designer from 1998-2004 and consulted with them until 2009), we discovered that our documentation (brochures and other collateral materials) reflected inaccurate wedge bounce specifications. This was true of both consumer and “tour-only” products. Upon learning of these discrepancies, Cleveland Golf CEO Greg Hopkins (founder and owner of Hopkins Golf) dispatched me, a Cleveland consultant at the time, to travel the U.S. professional tours to measure and document all of the sole properties of every wedge in use in American professional golf. This was a gigantic undertaking involving more than 1,000 golf clubs. Over the course of several months, I traveled to PGA, LPGA, Champions and Web.com tours to measure wedges and document everything in a master database. We considered anything north of 45 degrees loft to be a wedge.

Before this study, the task of creating tour wedges was something of a “black art.” It was iterative and often wasteful. We often had to custom fabricate many wedges for a player to get one in their hands. The results of the study might well have been one of the most revealing research projects in the history of the game. As a company, we were no longer guessing; we knew what wedges professional golfers needed and used, and it made our job a lot easier. We now had a primmer and a robust template to go by.

Through the study, we discovered the average loft progression for three-wedge sets was a six-degree spread: 47, 53 and 59 degrees. Almost no one played with a stock 56-degree sand wedge unless it was part of a four-wedge set, which was rare. The 56-degree wedges were normally bent to 54 degrees, and usually much of their flanges had been ground off usually to make them narrower (it should be noted that doing that actually INCREASES the measured bounce angle). The most common four-wedge loft progression was 46, 51, 54-55 and 59-60 degrees. We also saw many “pitching wedges” that were not matched to the iron sets. These didn’t look like 10 irons, but more like real wedges.

RELATIVE BOUNCE DEFINITION: If two wedges have identical sole properties (bounce angle, sole width, leading edge roll, camber radius and so on), the higher-lofted wedge will dig more and the lower-lofted wedge will act as though it has more bounce potential.

The results of the research effort gave birth to several new concepts and a complete cultural change in Cleveland’s wedge programs. I like to believe that this was a paradigm for the entire industry at large, and we had contributed to the game.

We essentially changed the definition of what a sand wedge was. The subliminal connotation was that there were several sand clubs, not one dedicated to the purpose. Of course, we all now view sand play as achieved by using several different wedges. Within the context of the wedge business at the time, this was a very disruptive and pioneering set of actions, but we were only following the lead of what the tour was already doing.

Interestingly, wedges never really fit into the concept of the matched set. While the design of a wood or iron set with a “family-like” progression of features seems pretty straightforward, wedges don’t fit that mold no matter how similar the shape to its iron siblings. Average golfers mistakenly identify wedges as the shorter end of the iron set, basically the 10-13 irons. Well, IRONS they’re not! Wedges are in a class all by themselves. They are definitely not irons in the same way that hybrids are not fairway woods. As a matter of fact, modern wedges share more in common with putters than irons.

In the first place, wedges are used in a tactical way. Think of the difference of “tactical” versus “strategic.” A driver, fairway wood or long iron deliver more strategic results…in other words, long-range targeting to a larger area. Tactical means close in targeting to a smaller area.

Wedges facilitate delicate distance control because of their weight, high loft values, low centers of gravity and deep faces. Because of the large surface area of the faces, wedges offer a diversity of points which to strike the ball and get varying results. Furthermore, with the roundness of their leading edges and often their little offset — or even onset faces — wedges allow their faces to be opened substantially without the hosel getting in the way. Opening the face increases the loft for higher short range shots and increases the bounce potential of the wedge. Complex geometry of the sole lets the user orient the wedge with a diversity of setups. Large cuts on the toe or heal called “shelving” facilitate a more vertical or flatter setup by the golfer depending on the need.

Wedges have been likened to an artists’ paint brush or knights on a chess board. Similar to an artist’s paint brush, wedges are used differently than other clubs and produce shots differently every single time they are used. These are the tools of skillful golfing artisans. And like the adept use of the knights in chess, wedges deliver an obscure and invented type of shot, yet deadly results that confound the competition who has limited understanding of this part of the game.

Indeed the wedge game has become the modern signature of the very best players in the world. And if you think about it, it makes total sense. The modern wedge was developed with professional golf in mind.

5 Things We Learned from Day 3 of the U.S. Open

Don Wood is a 25-year veteran of the golf industry, and is the owner of MyGolfIQ.com. He has worked in golf equipment R&D, design and manufacturing for companies such as Cleveland Golf, Golfsmith, Wood Brothers Golf and more, and spent many years working with some of the best players in the world on their equipment needs. Don has many U.S. Patents pertaining to fitting and short-game golf equipment. He is currently a member of the instructional staff at Common Ground Golf Club in Colorado. You can follow him on Twitter or Facebook.