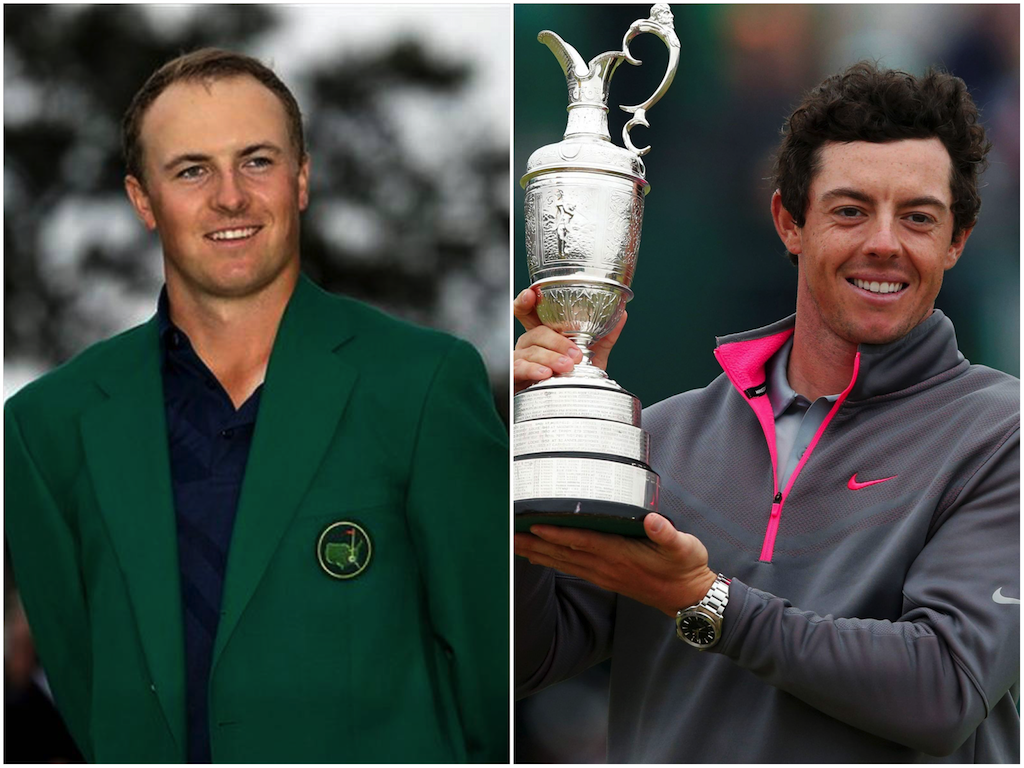 When Jordan Spieth lost in a playoff last week at the Shell Houston Open–possibly in part due to an ill-timed camera shutter on the first extra hole–it appeared the public had been robbed of the most appealing story from the event before the year’s first major.

Oddly, though, Spieth’s loss was the Masters’ gain.

If the 21-year-old had been victorious in Houston, he would have moved to No. 2 in the world a week before the big event at Augusta. Instead, Spieth placed runner-up and put his energy into a dominant performance at the Masters, an otherworldly victorious showing that allowed him to storm into that No. 2 spot with a force of youthful promise that we haven’t seen so powerful, well, since Rory McIlroy four years ago.

And speaking of Rory, he’s No. 1 and now Spieth’s No. 2. For the first time in McIlroy’s place at the top, he has a younger counterpart one spot behind him.

Rory and Jordan. No. 1 and No. 2. A combined 46 years of age and approximately a billion seasons between them before we should anticipate decline courtesy of Father Time. Are we being handed golf’s new rivalry for the foreseeable future?

It’s a tantalizing vision after the week that just transpired at Augusta. Spieth shook off a disappointing final round last year at Augusta, returning in 2015 to the tune of 18-under, absolutely obliterating a course that had not yielded a 72-hole total better than 10-under since 2011.

On a layout that has long been cast as a bomber’s paradise, he dominated the field without impressive power. Spieth, in fact, ranked 44th in driving distance among the 55 weekend competitors!

And this performance only reinforced a recent trend, as the 21-year-old entered the event coming off finishes of first, second and tied for second, not to mention his two other victories late in the 2014 season.

As for McIlroy, his week wasn’t as impressive, but didn’t exactly make us question his talent. After faltering to at least one big round in every Masters since 2011, the Northern Irishman finally broke the curse, posting a 71-71-68-66 finishing in solo fourth and six shots short of the Career Grand Slam.

Those numbers don’t do his work justice either.

The 25-year-old was 3-over through 27 holes of the tournament and below the projected cut line, and summoned all of his power to produce a final 45 holes that he played in 15-under. In a way, it was reminiscent of what Tiger Woods did in 2007 at Augusta when he briefly flirted with the cutline only to storm back to second place by the end.

In any case, Spieth and McIlroy performed at a high level, and with both now major championship winners in their earlier 20s, it seems based off these recent events that the two are guaranteed to dominate the sport together and fight vigorously for that top post.

But let’s not be premature here.

Spieth’s week at Augusta was as magnificent as his score suggests, and in a way it is actually underrated. His four-stroke triumph appears in the record books as a worthy but less than dominant performance. That’s kind of misleading, considering Spieth did this wire-to-wire, which only adds to the difficulty, and considering this aspect of his four-shot 54 hole lead:

Justin Rose just posted the 10th best Masters three round score relative to the field since 1989. He's four back.

But whatever Spieth says, his month of brilliance has not been his norm, and will likely be an extended peak to his usual play. He could keep up his series of wins and runner-ups for another week or two, but after that he’s likely to revert closer to his (highly enviable) average in the short term. It’s easy to anoint during a player’s peak, less simple to do so when time has passed and the player has regressed to his norm.

There’s also the harrowing issue of length off the tee. As I noted, Spieth pummeled Augusta without using much driving power, instead relying more on an all-around effort that was most potent in his putter. To an extent this is Spieth’s norm. For the past two seasons, he was remarkably average in driving distance on the PGA Tour finishing 80th of 180 in the category in 2013 and 89th of 177 in 2014.

Spieth has made remarkable improvement in club head speed in 2015 and that has shot him up the list to 55th, and his place among the above-average lot in power may be his true spot. Even if that’s the case, Spieth is nowhere near McIlroy’s top five rate in power, and that portends trouble.

Rory certainly has his flaws, his putting can be suspect and his accuracy off the tee can sometimes go awry, but those are defects that can be mitigated through extensive practice. A lack of elite power, though, is unfixable. And barring another pair of significant jumps in club head speed, Spieth will be forever saddled with this disadvantage.

McIlroy, then, will always have the upper hand when it comes to the tools to dominate and possess more leeway to employ flaws while retaining top-of-the-world status. That’s the sizable advantage long hitters profit from.

So maybe there are some reasons to cool off on an incoming Spieth-McIlroy rivalry hype, but that doesn’t mean I believe it won’t come to fruition.

A golfer doesn’t have to be a power hitter to challenge for the top spot; it’s just unlikely, not unprecedented. In fact, Luke Donald, a far shorter hitter than Spieth, kept his reign as the game’s best player for basically a full year. While Spieth’s recent play is probable to be classified as a peak, there’s no reason to believe he won’t reach more peaks in the future or that his average weekly performance won’t improve as he continues to gain experience on the professional circuit.

Spieth also appears to have the confidence and mental acumen to bulldoze any perceived disadvantages.

And how do we even classify rivalry in golf anyway? The distance issue may just be a red herring, as some have classified Woods-Mickelson a true rivalry despite its clear lack of near-equals.

The idea of a Spieth-McIlroy battle seems a foregone conclusion in the afterglow of this year’s Masters.

But let’s hold off for a bit on a definitive answer. Maybe give some time to view subsequent performances rather than handing over full control to recency bias.

I’m optimistic that we will see a robust rivalry between these two young superstars in the time to come, I’m just not willing to stamp it into certainty yet.

Whatever the case, this is an exciting time in golf. Let’s not ruin it by rushing into conclusions.

The struggles of balancing golf and family

6 things to know about new golf movie “The Squeeze”