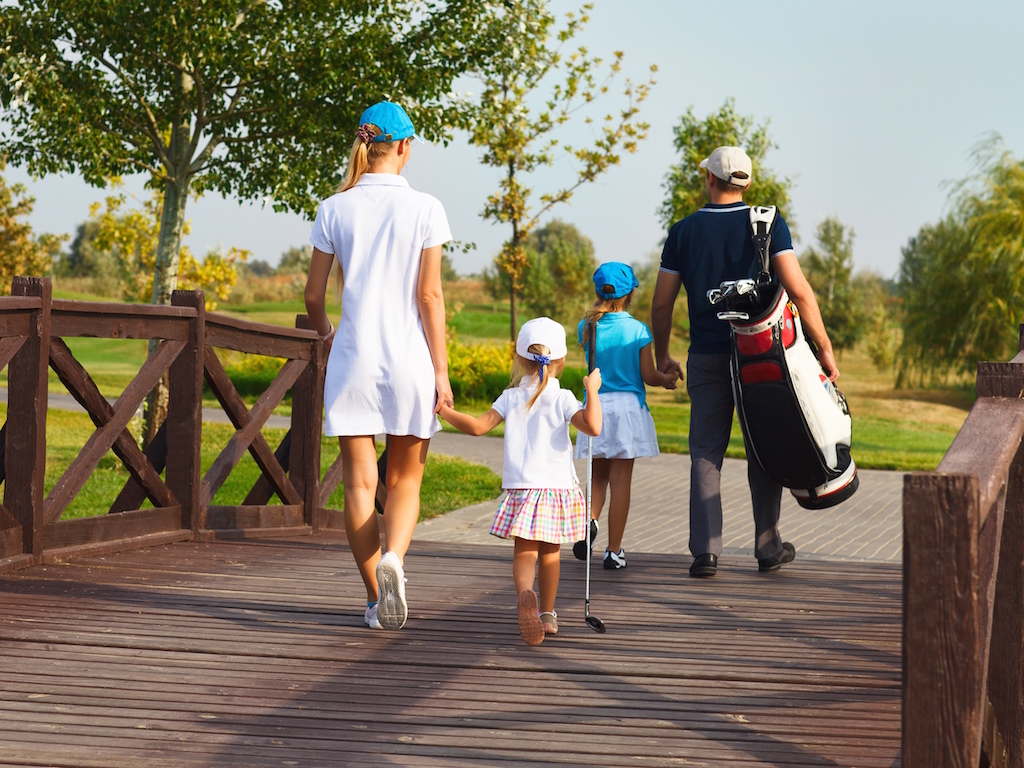 “If I never played golf,” Dave told me between nines at Goose Creek, “my wife would probably be happier. Would definitely be happier. But I wouldn’t be.”

Few of us live in a bubble. “I don’t waste time when I golf,” 32-year old Flavio said at Mountain Meadows. “I play early. I play fast. I don’t hang around and drink after the round. And I don’t say anything at all when my wife goes out on Wednesday night for her yoga class.”

If you tee off at 8 in the morning on a Saturday, you probably left the house at 7 and won’t return before 1 pm, at the earliest. And that’s if everything is on time. “I’m going to ref my daughter’s AYSO game at 3 this afternoon,” Riley told me matter-of-factly on the 13th hole, checking his watch.

“They’re at church this morning,” Darrin, a mid-thirties low double-digit said one Sunday morning on an LA County course. “I’ll be home before they are.” He teed off just after daylight after getting out of bed at 4:30. That’s 4:30 A.M. “I set my clothes out last night and I brushed my teeth and shaved in the guest room, and I’m quiet so I don’t wake anybody up.”

Not everyone has to pay attention to the time during the round. “I’m gonna take a nap this afternoon after I get home,” Scott said. “My fiancé is away this weekend.”

“You’re not gonna do a replay?” His brother-in-law-to-be Patrick asked, “Dude, what’s up with you?”

“I will if you will,” Scott answered.

“No man, I got the honey-do list later,” Patrick said longingly.

“I had a breakfast meeting early today and spent the rest of the morning in the office.” Efron is in sales and apparently he’s doing well since he was playing a pricey course on a Thursday afternoon with one of his friends. “I’ll be home by 6 tonight just like usual. My wife knows where I am, and my boss just cares about my numbers.”

“Two days a week I don’t go in until 1,” Dale told me after finishing 18 one Tuesday morning at Jurupa Hills. “I live right over there,” he said pointing. “I dropped my girl off at school at 7:15, my wife is at work, so I just need to leave the course no later than twenty-after-twelve.”

For some golfers, time is relative. Kent was hanging out on the clubhouse patio reading a golf magazine at 11:30 one weekend morning. “I got done early. We played in under four hours,” he said. “Can’t go home yet, don’t want my wife to expect me home this early every weekend. I’ll stay here until noon because that’s what time we’re usually done.”

When the kids are very young and they spend their days sleeping or crawling or watching videos, time isn’t as important. “I’m not hurrying so I can get home to my girls,” Kevin told me at Strawberry Farms. “They’re with my mother-in-law, and my wife is out hiking with her friends this morning so there’s no rush.”

But when the children are involved in extra-curricular activities like sports or dance, tutor sessions or music lessons, and parental support is measured by attendance even more than monetary donations, that’s when the time it takes for a round of golf can lob a wedge into family relations.

“I quit playing golf from the time my oldest was five until my youngest was 13,” Harry, now a doting grandfather, told me. “And that’s why I never got to single digits…no, really, it was worth it to watch the kids grow up. My wife tells me that, anyway.”

It’s all about the choices we make, and the priorities we set.

“I’m not ever going to play golf for my living,” Jared told me, “so I play when it’s convenient, and I don’t play when it isn’t. That said, I’d play more often if I had the time, and my wife knows I’m in a better mood all week when I play.”

There were eight guys in two foursomes in front of me on the Babe at Industry Hills a few weeks ago. They told me they’d known each other since middle-school, almost 30 years ago. “We used to go out drinking, or drinking and eating at least one night a month,” said Lee. “Now once a month we play golf together on a Sunday morning. The girls think that’s better even though we probably spend more money than before.”

“And we drink just as much,” his companion Jay added.

“I play back nines early on the weekends,” Kelly told me as he finished his day on the links before 9 on a Saturday. “I’m home before the kids are done watching cartoons.” That’s one way to satisfy the golfing Jones.

“The club has childcare so while I’m playing, my wife leaves our son in ‘Kids Court’ and she does what she wants for a few hours. Then she picks him up and we rendezvous for lunch in the grill room.” With a slight wave of his hand to the private club bag-boy taking his sticks back to storage, Jake reminds me there is more than one way for lucky young men to take to the tees.

Then there is the future to look forward to.

“It’s hard now with three kids under 10,” Lawrence said. “But the two older ones are taking lessons, and we play the par-3 course together some. In a few years maybe I’ll have my own family foursome.”

It’s clear that balancing the time that golf takes with the demands of raising a family can be difficult., at least at some ages. But one morning at Hidden Valley, Edward laid out his blueprint for the years ahead: “My wife loves golf, too,” he said. “Someday when the kids are grown and out of the house, she and I will be playing together every weekend.”

Tell us how you balance golf and family in the comments section below. And check out Tom Hill’s humorous golf book, A Perfect Lie – The Hole Truth at 7-ironpress.com – use the coupon code GOLFWRX for free shipping of the paperback.

Inside the world of PGA Tour reps