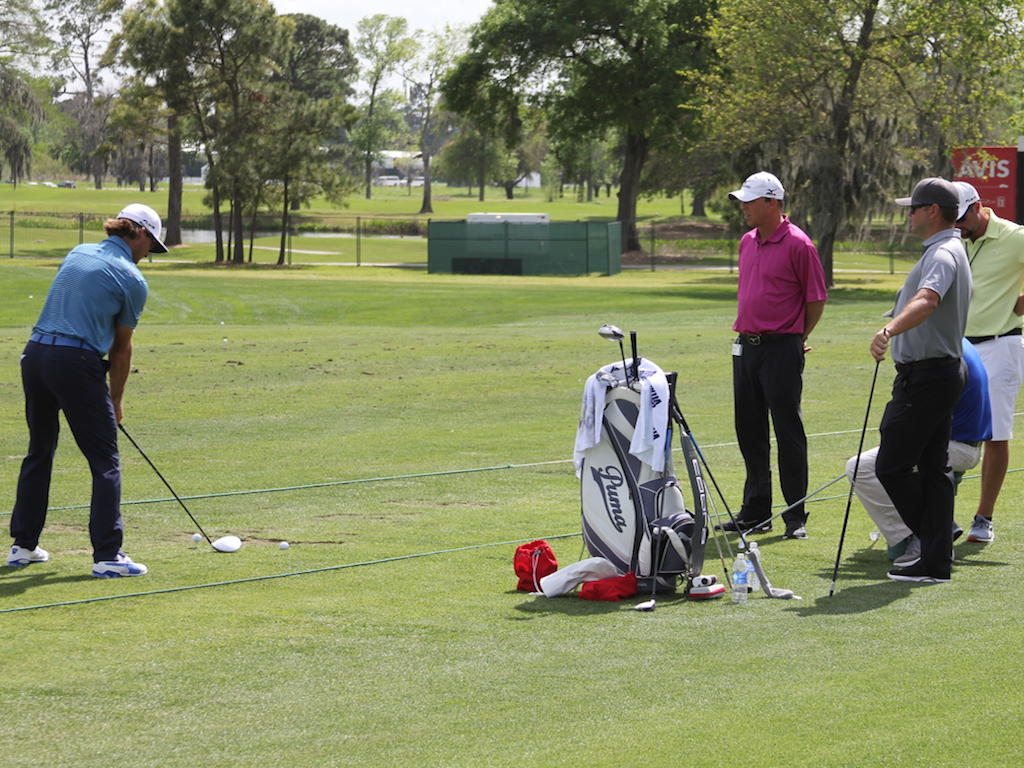 The average golf fan probably doesn’t know much about tour reps. They’re masters of product knowledge, golf sense and interpersonal relations, and occupy the practice areas of the golf’s professional tours from Monday through Thursday to serve the players’ needs.

[quote_box_center]“It’s always been kind of a secret thing as far as what we do,” said David Wilson, a long-time tour rep who works for True Temper. “Most people show up on Thursday to watch the tournament, but we’re already gone. Once you tell people about what you do, they’re like, ‘We had no idea that even existed.'”[/quote_box_center]

Beyond the club and component reps, there are also “product” tour reps, eager to get their goods in the hands of golf’s professional elite. Rich Massey, tour rep for the DST Compressor training aid, is one such individual. He’s in the midst of an explosion of tour players using his product.

“Rich, he’s got that new club out,” Wilson said. “You get a couple of guys trying it, all of a sudden, they’ve got it on TV. I’m sure he’s getting hit up for guys to try it.”

The product ”kind of became viral,” Massey said. He explained that when he began showing the curved-shafted training club to teachers such as Sean Foley and Todd Anderson, every single one of them said, “This is genius.”

“It’s pretty powerful when you can get guys out there to talk about it like they are,” Massey said. “It makes my life easier.” 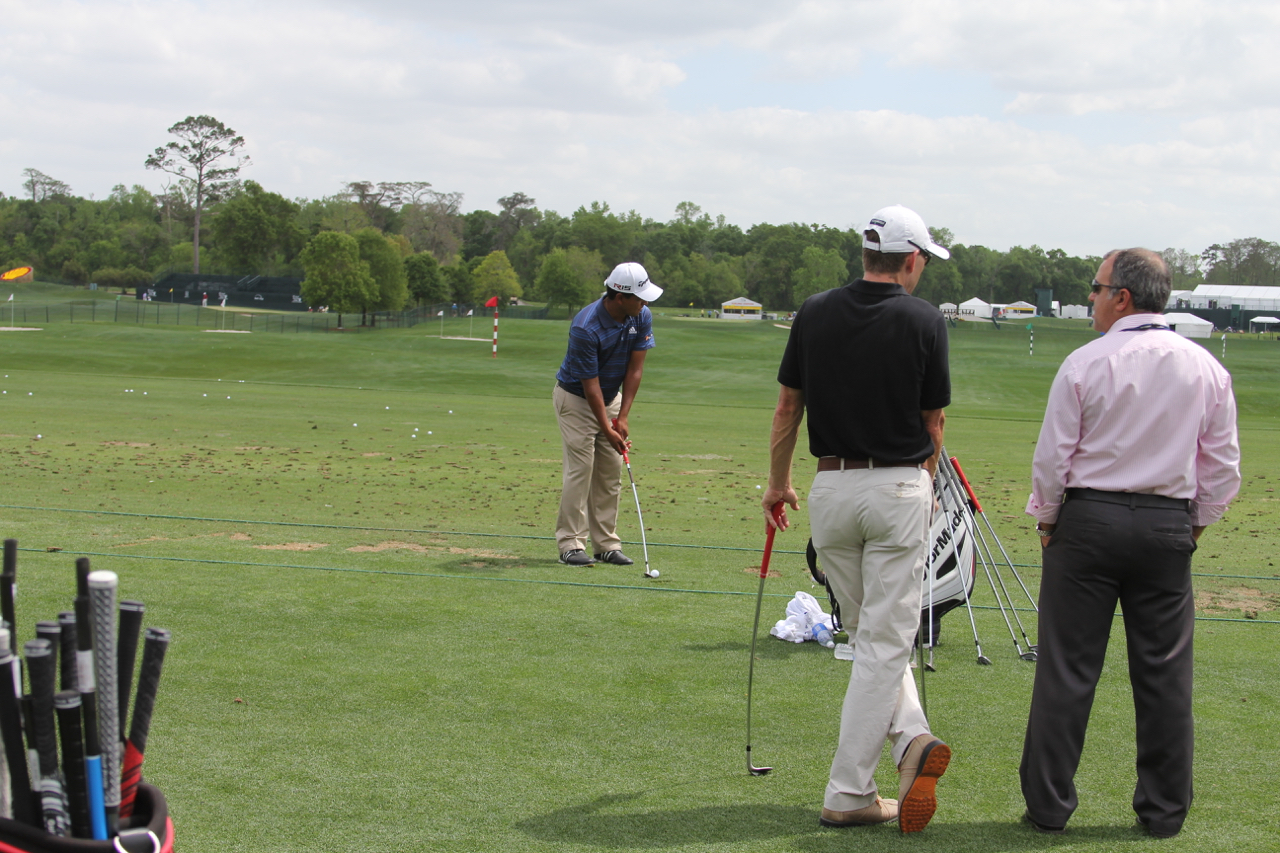 “In reality, I’m not selling it at all,” Massey said. “According to the standards, you’re not allowed to openly solicit a player … so I can’t just walk up to a player and say, ‘I have this great club. Want to try it?’”

So how does a product rep get his goods in the hands of a player he doesn’t know?

“Ryo Ishikawa is a perfect example,” Massey said. “I got introduced to him by his caddie. I showed him the club. He was interested right away.”

It’s as easy as that — if you have a product players like and that’s beneficial to them. If not, well, there’s not much you can do. Massey indicated he’s seen many products on the range that you can’t give away to the pros.

Of course, you don’t always need an intermediary to talk to a player about a product. 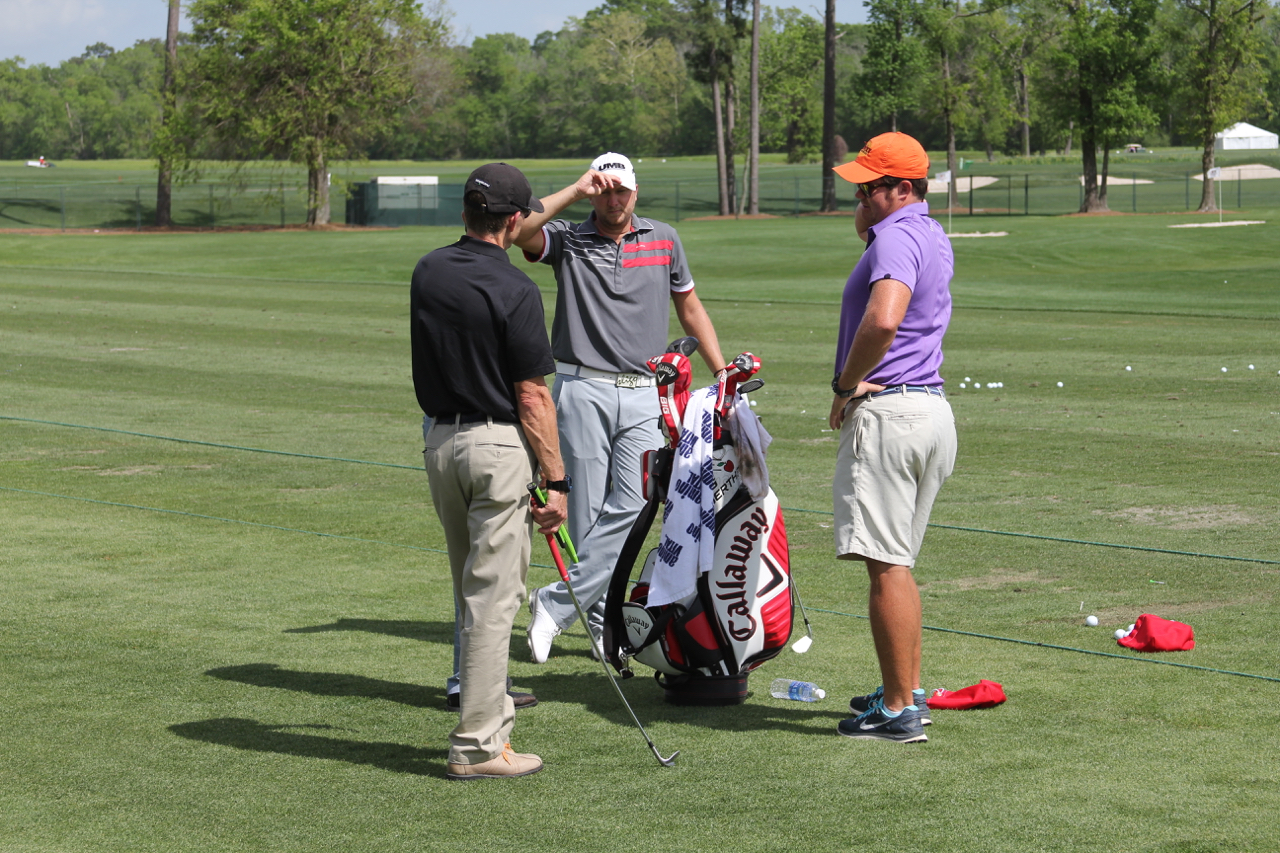 Massey “socializing,” a key component of the job.

That leads us to the value of building relationships.

“Obviously, out there we’re doing a lot of socializing…talking to guys…telling stories,” David Wilson told me. “It’s all about enjoying those relationships, [enjoying] talking to the best players in the world about their lives and their families.”

There’s a lot of chitchat on the ranges of the PGA Tour. But as Massey noted, it’s not always about the subjects you might expect. One hot topic recently? Underwear. It seems that the new 2UNDR Swingshift Boxers are making quite a splash. One golfer has been particularly vocal about his delight with the support he’s getting: Jason Bohn.

“You would have thought he was a salesperson for the company,” Massey said of the 41-year-old tour veteran. (Sidebar: As you can see, Bohn enjoys bringing attention to that region of his anatomy).

So, how does one make it to the (usually) plush green grass of the PGA Tour’s ranges to pitch products and attend to players’ needs every Monday through Wednesday?

“There’s all kinds of different scenarios for how guys get to the PGA Tour,” Wilson said. “A lot of them are ex-players. I did half a year on the Web.com Tour … been doing the PGA Tour for the last 15 years. Keith [Sbarbaro], who works for TaylorMade, he was a good player. He played with Phil [Mickelson]. A lot of these guys, they’ve been in the industry for a long time.” 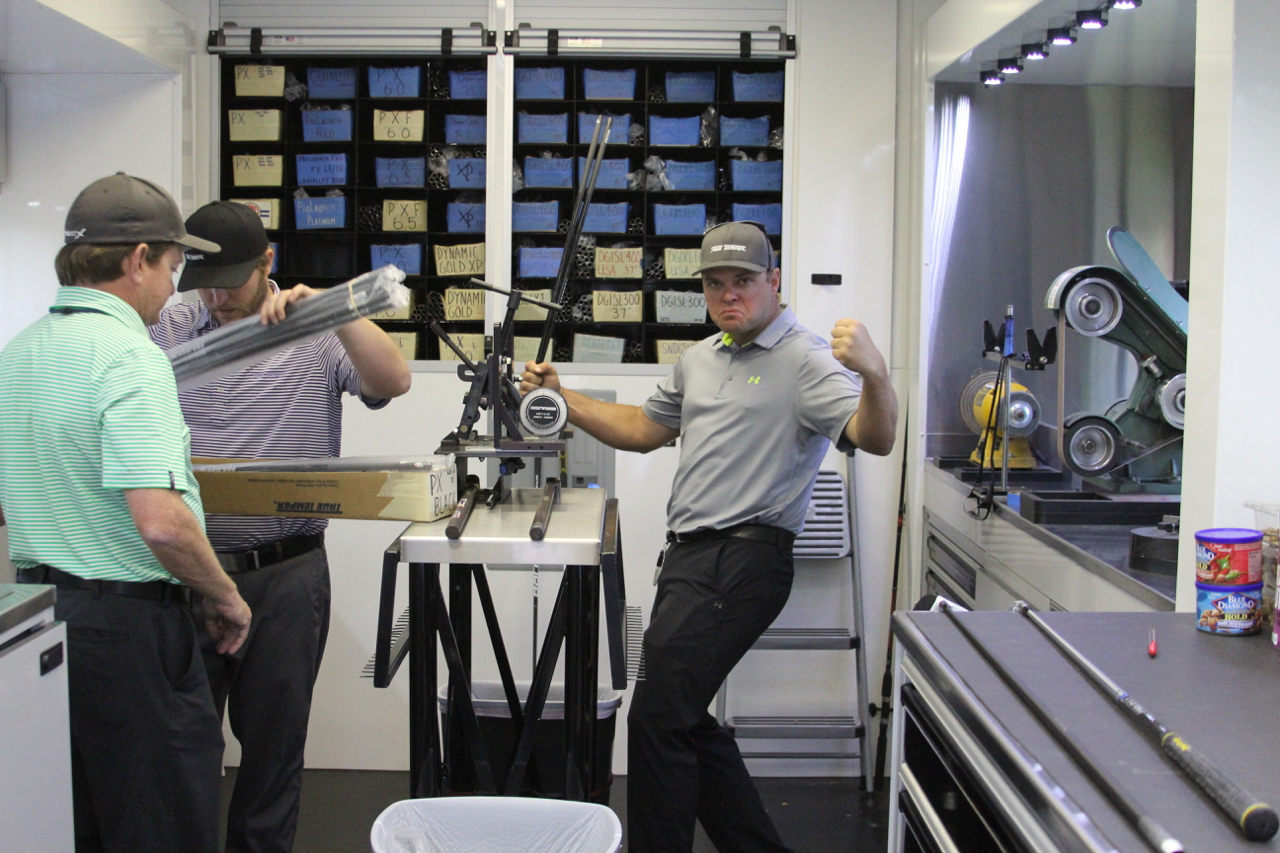 David Wilson strikes a pose in a tour trailer.

And how many of these experts in product knowledge are there from each manufacturer? It varies, Wilson said.

“TaylorMade, they probably have three reps that are taking care of players on the range. You have a putter guy. You have two guys in the van that are doing all of the building. Titleist usually has one or two ball guys out. They’re doing testing, [they have] guys in the locker room stuffing lockers. For the last 14 years, I was the only individual representing Aldila.“

The average day for a tour rep is a long one. They usually get to the range around 7 a.m., so they can catch players early in the day. An once the players’ golf shoes hit the ground, it’s crunch time.

“We basically have three days to work with these guys,” Wilson said. “If there’s an issue, you know. If the driver is spinning too much, etc. We have Monday, Tuesday, Wednesday to try to get that figured out.”

The goal is simple for a rep, but the responsibility is huge, especially for those working for major OEMs.

[quote_box_center]“Your overall goal is to get the players to play your products,” Wilson said. “Having those friendships, building those relationships is super important. They put a lot of trust in me. We have the ability to use TrackMan. These guys are playing for a lot of money and you’d hate for them to be playing the wrong product. There’s a lot of emphasis on making sure that their drivers are right, making sure their lofts and lies are correct, making sure that their grips are what they want them to be. There’s a huge checklist.”[/quote_box_center]

“For us to be able to work with them and know, ‘Hey, I had an influence on building that driver that Jordan Spieth just won with.’ It’s huge,” Wilson said.

There are innumerable moving parts in a PGA Tour pros’ success, and it’s a team effort for sure. The Tour pro of today is much more akin to a NASCAR driver than the pro of 75 years ago, who hocked balls in a shop and played events when he could.

“There are some really smart guys that work on the PGA Tour,” Wilson said. “There’s guys that have been doing it for 20-plus years.”

Being part of the team is, as you would imagine, rewarding, and turnover isn’t high.

“We’re all kind of a traveling circus…play golf together…have dinners together,” Wilson said. “Most guys that get out here, they don’t leave.”

Can you blame them?

Getting to know Instructor Tom Stickney

The struggles of balancing golf and family