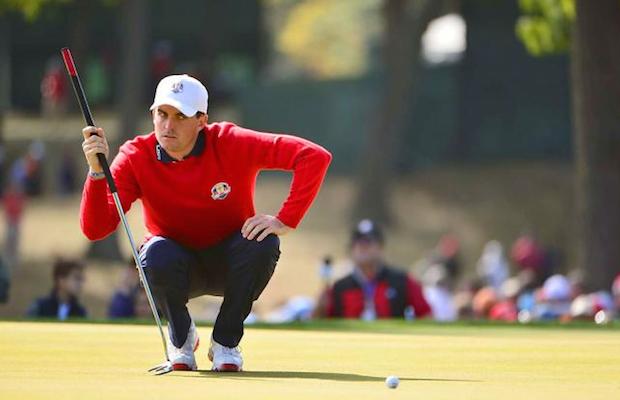 With the Ryder Cup this week, I thought I’d share with you one of my pet peeves when it comes to making putts and rolling the ball the right speed. It drives me crazy when I hear announcers at tournaments say: “He can’t leave this putt short, he’s got to give it a run. It’s a must-make putt.”

What ends up happening when players follow this advice is that they hit the putt way too hard and it rolls something like 10 feet by the hole. The announcer comes back with, “Well, at least he gave it a good run.” But the reality is that a ball that rolls past the hole more than a couple of feet is travelling too fast to go in, even if it smacks square into the center of the hole. And nowhere does this happen more often than in Ryder Cup matches or match play, where sometimes the player does not have to hole out to finish the hole.

As a matter of mental practice, a good putter has learned how to control their putting “speed thoughts” to hole out, except when an outside situation interferes with the normal decisions process they use to hole a putt. And that outside influence is usually an outcome-based intrusion, which can come in the form of, “A must-make putt,” where they feel they have to hit their putt harder than usual.

Let’s enter two brains in a normal round of golf

The first person, who plays occasionally and practices on a limited basis, has a lot of wrong “speed thoughts” when they putt. They might hit the first couple of putts of the round well past the hole, well short of it or a combination of both. In their head, they are adjusting speed with the back-and-forth thoughts brought on by “don’t” sentences. Those sound like this: “don’t knock this one way past like last hole” or “don’t leave this way short again.”

Either way, they are going to blast it past the hole if they were short on the previous attempt, or leave it woefully short if they were way long on the hole before. They are not controlling their inner conversation very well, and by thinking about what they “don’t” want to do, they are promoting the opposite outcome.

“Don’t leave it short” usually results in hit a putt way past the hole. For example, I recently had one of my junior players complaining about hitting it too hard on one hole and too soft on the next hole. The player was constantly leaving the putt either six feet past the hole or six feet short of it. He was stuck on the ping-pong thought loop of “don’t hit this one too hard” followed by “don’t hit this one too soft.”

These are common thoughts that go to the brains of a player struggling with speed.

Both thought processes are detrimental to hitting the putt the right speed when you’re struggling. What I tell my players to do when this is happening is to think “do” thoughts, not “don’t” thoughts. I try to give them the mindset of the elite player who is thinking correctly over putts when struggling with speed.

So let’s look at the way a good putter’s mind works on a putt.

Once the elite player has finished considering the line and speed of the putt, their mind goes into execution mode.

“How do I need to hit this ball to get it to go the right distance on the line I select?”

Then, they either take a physical practice stroke to feel the “correct” speed or a mental one where the mind internally moves the body and they feel the stroke without taking a physical practice stroke. Each practice stroke is quiet, void of “don’t” or outcome thoughts, as the player feels the perfect speed and executes the motion that will roll the ball to the hole at the perfect speed. If it misses and comes up a little short or a little long, that’s alright. It is ok to be wrong if you are in control of your “speed thoughts.” Then they get set and hit it the speed they feel is correct without the “don’t leave it short” or “don’t knock it way past” thoughts of the poor putter.

Did you catch the first part of the above sentence? No matter what, they try to hit it the speed they feel is correct! So each practice stroke results in an inner conversation that if there were words for each stroke it would end up sounding like this:

Inwardly, you are trying to calibrate a stroke with the mind quietly approving that this is the correct speed, disregarding previous outcomes that might have been too hard or too soft of a roll. It is this quiet recalibration to the correct speed that overcomes the “don’t” speed thoughts.

Here’s a relevant example from a past PGA Tour event.

Several years ago at the Zurich Classic in New Orleans, David Toms had about a 20-footer on the last hole to force a playoff. Once again, the announcers declared, “He’s got to get it there, he can’t leave it short.” So what happened? Toms took his time and decided on the read and speed of the putt. He took a couple of practice strokes and let it roll. The ball was dead in the center of the cup and came to a halt — one turn short of dropping and forcing a playoff.

The announcers groaned, “Oh how could he leave it short? He had to get it there!” From where I sat, I saw things differently. As a past player, I knew he didn’t intentionally leave the putt short. I knew he hit the putt with what he thought was the proper speed and put his best stroke and roll on it. Toms just happen to underestimate the correct speed and came up short instead of perfect. For this putt on this green at this time, he was just wrong about the speed. Nothing more.

Remember, there is a specific speed the ball has to be rolling for the hole to secure the ball. If the ball is going too fast when it gets airborne over the hole, the hole cannot collect it. This is called capture speed. It is governed by the laws of physics and we can’t cheat it no matter what we do. So when someone says, “Give it a roll,” make sure you focus your inner thoughts on picking the speed you think is correct without the “Don’t leave it short” thought and turn it loose.

Most times, a putt struck too hard doesn’t go in. Instead, focus on making a stroke that will roll the ball the perfect speed in your mind. If you happen to be wrong and the ball comes up short, oh well, tap it in. At least you tried to hit the ball with what you thought was the correct speed.

So as you enjoy the Ryder Cup, watch for the putts that the player “gives a run” and notice how far past they roll the ball if they miss. If it is a couple of feet then that is fine, but if it goes well past, you can bet the outside influence of not having to hole out and the inner concern about not leaving it short (“give it a chance”) entered into his head, which made him blast it too hard, thereby never really allowing the ball to arrive at the hole with the right amount of capture speed.

Best of luck to both teams, but from my academy I have to say, “Go USA!”

How does Rory hit it so far?