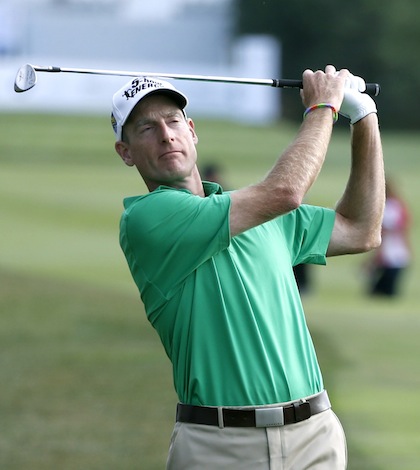 The BMW Championship became the 22nd PGA Tour event to be delayed due to weather conditions this season, as Sunday rain soaked Conway Farms and forced the penultimate FedEx Cup Playoffs event to a Monday finish. Play was halted twice before competition was called for the day, and will resume at 8 a.m. local time, 9 a.m. ET, Monday.

Only six players were able to finish their rounds, including Rory McIlroy who carded his second consecutive 68. McIlroy’s Tour season is finished after the world No. 4 found himself in last place thanks to opening rounds of 78-77. He needed a high finish this week to have hopes to advance to the final event of the year.

Dustin Johnson also completed his final round and will be the only one of the six players who may advance to the Tour Championship in Atlanta. Johnson is currently projected at No. 30–the last spot in at East Lake–but others will have the opportunity to pass Johnson on Monday, including Charles Howell III, Ryan Moore, Luke Donald and Rickie Fowler to name a few.

Lee Westwood entered the week at No. 30 in the listing, but concluded the tournament with a 12-over-par total and will not advance.

The final 11 groups have yet to tee off, which has both pros and cons. While the tournament leaders didn’t have to worry about the stopping and starting that comes with dealing with weather predicaments, some may not have hit a shot all day.

With Sunday being a literal wash, the final groups are on equal playing grounds Monday. The course has been firm through the week and players will now have to adjust to damper conditions.

While play has been challenging at times this week, Conway Farms has also yielded low scores, with Furyk’s 59 obviously standing above the rest. Matt Kuchar posted a 10-under round on Saturday and one can guess that conditions will be prime for scoring come Monday. Greens have rolled pure and with soft greens, and those atop the leaderboard will surely have to make a move as the tournament concludes on Monday.

Seasoned veterans Furyk and Stricker are 1-2, but haven’t been able to close the door in recent victory opportunities. Furyk hasn’t claimed a win in his last five 54-hole leads, and his last Tour win came in the 2010 TOUR Championship. Meanwhile, Stricker has also had his chances as of late–including the U.S. Open at Merion–but hasn’t taken the top prize since the 2012 Tournament of Champions. But, he has posted three 2nd place finishes this year in a limited schedule.

Next in line are Brandt Snedeker and Zach Johnson, two and three shots back, respectively. Snedeker has two wins this season, while Johnson is seemingly coming in to form with five top-10 finishes in his last six starts. Snedeker will be the first defending FedEx Cup Champion to make the trip to East Lake the following year.

Tiger Woods sits in solo fifth, four shots behind Furyk. Woods has a pair of 66s this week along with a lackluster 72 which featured his notorious two-shot penalty. On Saturday, Woods caught fire mid-round and birdied six of seven holes on holes Nos. 6 through 12. His Saturday 66 tied his lowest third or fourth round score of the year, as Woods carded 66 en route to victory at the Arnold Palmer Invitational—also a delayed Monday finish. However, damper conditions may not favor Woods, who has notably struggled when greens change speed, especially for the slower.

With all things considered, look for the Snedeker, Johnson pair to battle it out for the win. Snedeker has proved his ability to win when behind and seems to be playing at ease once again after battling injury in the middle of the season. Johnson is a gritty player when challenging for the victory. Also, his current stretch of finishes seems as if he’s due for a win, much like Henrik Stenson cashing in last week after multiple close finishes.

Furyk shoots 59 at the BMW Championship