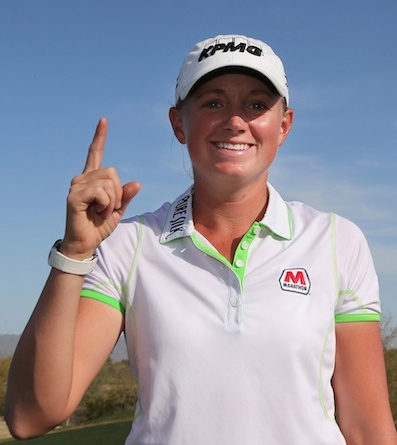 As if a simple thing like a two-stroke penalty would be enough to derail the Lewis Express at the recent RR Donnelly LPGA Founders Cup.

Stacy Lewis, history will remember, posted rounds of 68-65-68-64 for a total of 23-under 265. Her margin of victory over Ai Miyazato was three strokes. Paired with Miyazato during the final round, Lewis made up seven strokes on Sunday, including four during the stretch from Nos. 14 to 16.

History will easily forget the two-stroke penalty assessed to Lewis on Saturday, by way of her caddie, on No. 16. Lewis had forgotten about it after she left the press room that evening. The 28-year-old divulged that “in my mind, I shot a six-under par 66” during the third round, revealing precisely how focused she was on her goals each and every day.

History will show that Stacy Lewis won the Founders Cup on Sunday, that she replaced Yani Tseng as the top-ranked professional female golfer in the world and that she established herself as the pre-eminent golfer from the USA in her generation. It will not record that she demonstrated unwavering faith in her caddie and herself. That is left to us to communicate to golfers and fans yet to come.

Stacy Lewis tied for 15th place at the season-opening Australian Open. She tied for third place at the next tour event, in Thailand. Two weeks ago, she won the HSBC Women’s Champions event in Singapore. She’s on a hot streak of sorts, one that might last a year or two. There’s something about the LPGA that breeds long-term success. Ask Yani Tseng, unstoppable from 2009 to 2011.

It was appropriate that Lewis ascended to the No. 1 worldwide ranking at the Founders Cup. The FC defined the new LPGA when Mike Whan convinced the players that:

It was proper that Stacy Lewis addressed the two-stroke penalty clearly, in a finite manner. For those who missed the news, her caddie descended into a fairway bunker and was apparently observed swiveling his foot by a television viewer (Don’t get me started on those rules call-ins). After reviewing the tape with tour officials and before she signed her card, Lewis assessed herself a two-stroke penalty for testing the conditions of a hazard.

Testing the conditions of a sandy hazard is a funny thing. As a golfer takes her stance, she is allowed to dig in, essentially revealing the firmness of the sand from which she will play. For a fairway bunker shot, wherein the golfer contacts the ball first, this is a moot point. For an explosion shot, the quality of sand matters more. In Lewis’ case, about 60 yards out on a short par four, she was in the nether region of explosion versus ball-first.

A germane lesson emerges from this ordeal. In an era when referees are accosted by players and every play is subject to review ad infinitum, golf stands like a beacon for self-governance and integrity. Much as tennis players trust one another’s in and out calls, so do tournament competitors rely on the honesty and forthrightness of their fellow contestants. The golfer that intentionally skirts the rules does not last long in tournament play. The caddie that foozles the ball toward an improved situation is branded a cheat and routinely punished through dismissal.

As Lewis greeted the media on Sunday, she thanked the unknown caller for giving ample motivation to play her best and she paused to consider how far she had come from such an unpredictable place.

“People with metal in their back, how do you play golf…”

As though she had not just earned a top ranking but also assumed the mantel of authority among the players, she paused further and concluded:

“We have majors coming up, Solheim, and so much more to play for and I’m just excited about the rest of the year more than anything. I’m having a blast on the golf course, and to be No. 1 in the world, it’s what everybody out here on Tour is working for and to be that person is, I mean, I really don’t even know what to say.”

Streelman has a ‘seriously’ good Sunday