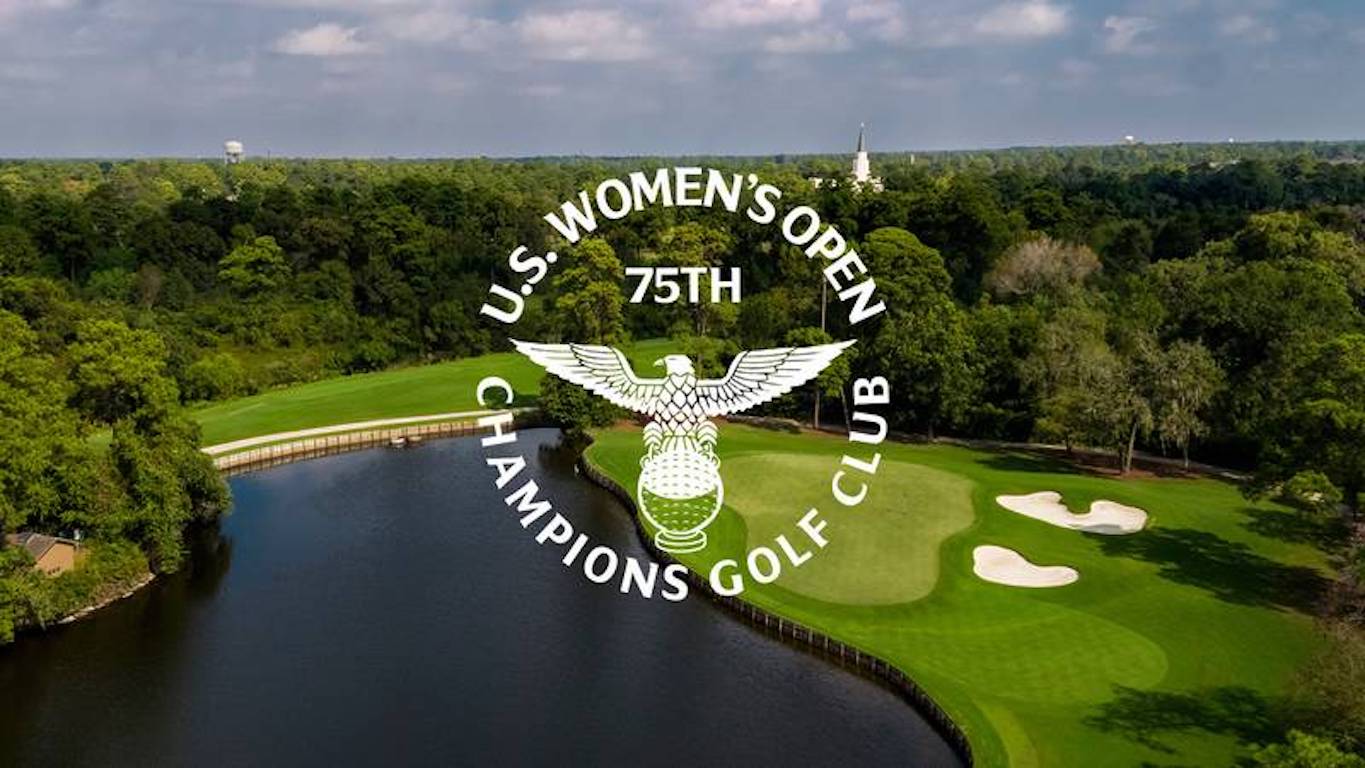 We learned that 2020 was as kind to the the golfers at Champions Golf Club, as it was to the rest of humanity. We learned that sadism still has a place on the tournament set-up committee of the USGA. We learned that there is little to no hope of the fourth round finishing on schedule on Sunday. All in all, December in Houston is proving to be little better than July in Houston, just the opposite end of the weather spectrum.

It was a rough go on Saturday for the world’s finest female golfers. Just two golfers broke par on the day, and it’s a certainty that the high-ringer score would be much more impactful than the low one. In fact, two holes (1 and 15) recorded zero birdies on the day. It’s almost humorous that Chella Choi had an ace at the 180-yard 12th. That there was even one moment of perfection on such a foul day, is little consolation.

We did learn five things on this Saturday of the 75th U.S. Women’s Open, and here they are.

1. Ji Yeong Kim2 posted a round for the ages

Four birdies. Zero bogies. Fourteen Pars. The only things that Ji Yeong Kim2 didn’t do on Saturday were win the tournament (that chance comes tomorrow) and birdie 1 or 15 (no one else did, either.) To make complete sense of her round, is impossible. To understand its value, consider that Kim started the day on the other side of the draw, the one that teed off on the back nine. At dawn, there were 33 golfers ahead of her. At dusk, only two. Kim2 is tied with Moriya Jutanugarn for 3rd place, two back of Amy Olson (second place) and three behind third-round leader Hinako Shibuno. Hae Ran Ryu was the only other golfer to shoot below par on Saturday, and she managed just one stroke below the dais.

2. How about them amateurs?

There are still three amateurs inside the top 15, a tremendous feat. One of them is not Linn Grant. For the second time in her young career, Grant entered the final 36 holes with a chance at victory. For the second time in her young career, Grand shot herself out of contention, with a woeful day-three showing. In complete contrast, Kaitlyn Papp maintained a semblance of composure, returning only three strokes to Old Lady Par. She rests in a tie for 5th, just four shots out of first. Sweden’s duo of Maja “House of” Stark and Ingrid Lindblad sit tied for 15th at +2. They won’t win on Sunday, but one of them could claim low amateur, should Papp falter.

Hinako Shibuno was unable to increase her three-shot advantage on Saturday. In fact, the Cypress Creek course took most of it back. Shibuno made three bogies and one birdie on day three, moving to four-deep, just one shot ahead of North Dakota’s Amy Olson, the day-one leader. After making 10 birdies over the first two days, Shibuno showed that she can hold on when the well dries up. Another 74 might be enough to win tomorrow. It would keep her under par for the week, but I don’t think that it will get the job done. Shibuno will have to be sharper to claim a second career major title.

4. The golf course got away again

It’s not Shinnecock Hills yet, but it might be by tomorrow. The sayers of the USGA had to have an idea that weather would play a role in the event. What were they thinking, that 1974 Winged Foot was a nice throwback? That bogey golf would keep viewer interest up in December? The USGA had an opportunity to showcase women’s golf at a time of year when it is an afterthought, and failed miserably. Let’s hope that the Olympic Club in 2021 offers a manageable set-up, or at least a plan B. After all, Olympic has a proven record of providing awkward event conclusions.

It’s a super-safe bet that Danielle Kang will not call me anytime soon to be her life coach. My unwavering support ends today, after Kang super-struggled to a 79. What I do know is this: there is no clear favorite to win on Sunday, but there are so many players for whom a victory would represent a lifetime achievement. There’s Lydia Ko, trying to regain her teenaged dominance. How about Moriya Jutanugarn, who would love to step clear of her sister’s long shadow? Amy Olson, for one, who has been here before and misfired, and would love to put those memories away in a closet. I’ll take Yealimi Noh for the win, however. Noh played well last week at the VOA, and will have enough good shots and putts left to hold on while the golfers around her falter.

This week’s installment of Tour Rundown was, literally, a weeklong affair. The Korn Ferry Tour concluded its Bahamma Breeze with a Sunday-Wednesday event. The PGA Tour went Wedneday to Saturday, to avoid an NFL playoff conflict. And the DP World Tour, owing to some urgent rains in the desert, was pushed to a Monday finish. In all, eight days of competition are featured below. That, friends, is a record for Tour Rundown. Beginning January 22nd and concluding January 30th, we bring you this week’s elongated Tour Rundown. Let’s have some man-bun fun!

Canada’s Ben Silverman stood atop the 18th tee with a three-shot advantage over closest pursuer Cody Blick. Let’s amend that to the 72nd tee. After a week’s effort, Silverman was a par-five hole away from claiming his first professional win in six year. Fifteen minutes later, Silverman wrote down a seven on his card, while Blick scratched a four on his. In nearly an eye’s blink, the two were tied and headed for a playoff. What chance did Silverman have?

Plenty, it turns out. The pride of the Maple Leaf gathered himself, kept the ball in play, and made par on the first playoff hole. When Blick found penalty trouble on two occasions, he could find no fewer than seven shots, and the tournament’s trophy belonged to Silverman. The winner admitted that he had gotten into his own head before closing the deal, Thinking that the tournament was his, focus went away and strokes slipped. After all was completed, Silverman had become the first sponsor’s exemptee to win on the Korn Ferry Tour in five year, and he was also the recipient of an honorary membership from the Great Abaco club.

After a double bogey on 18 in regulation, Ben Silverman clutched up and parred 18 in the playoff to secure his second #KornFerryTour win. ? pic.twitter.com/7jjYQMgoON

Tiger Woods has been a front-runner throughout his storied career. Max Homa is a capitalizer. Homa has developed an innate sense for when the leaders are on the ropes, and it is then that he makes a move. Homa has won six times on tour, and five of those six wins have seen him follow a day-three in the 70s with a day-four in the 60s. His other win saw twin 65s on the weekend.

At dawn’s light, chatter around Torrey Pines centered on Jon Rahm winning yet again, or Sam Ryder holding on to win a PGA Tour title, to go with his Canadian and Korn Ferry tour tropies. Both Rahm and Ryder collapsed to 74 and 75 respectively, and the barn door was wide open for an unexpected winner. Collin Morikawa, Sahith Theegala, and Sungjae Im played themselves into the top five, but none could make enough birdies to reach the teens-under-par on the week. Making an impressive move was the ageless Keegan Bradley, who reached 11-deep with four birdies on the inward half. His attempt at a fifth fell short at the closing par-five hole, and it was Homa’s birdies at 16 and 18 that moved him two shots clear of Bradley.

2 wins in 6 starts and he’s hungry for more ?@MaxHoma23 moves up to No. 2 on the #ComcastBusinessTOURTOP10 standings after his win @FarmersInsOpen. pic.twitter.com/49ywUKCxMy

Rory McIlroy claimed a third title at Emirates Golf Club, but he did not make it easy on himself. Borrowing a page from Ben Silverman’s book (see above) McIlroy got into trouble off the 72nd tee at the Dubai Desert Classic. Unlike Silverman, McIlroy was able to lay up, pitch to about 25 feet, and drain the birdie putt for 19-under par. In doing so, he held off the charge of the ersatz Patrick Reed, who reached 18-under with birdie at the last.

McIlroy flirted with water at the last, but his errant drive found the last patch of dry rough. He wisely took his medicine and played to the fairway. His wedge was propre distance, but a bit wide left. His putter was spot on, however, and the last turn of the orb took it to the bottom of the hole, and victory. Lucas Herbert also closed fast, with 66 on day four, to assume the third position on the podium.