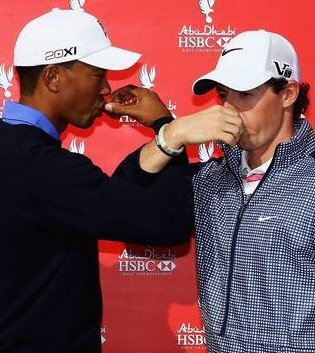 The Abu Dhabi HSBC Golf Championship always features some of the strongest fields of the year. And every year since its 2006 inception, it’s been one of the biggest events on the European Tour.

This year however, Abu Dhabi will be bigger than the events of all seven prior seasons – combined.

World No. 1 Rory McIlroy and World No. 2 Tiger Woods emerge to make their highly anticipated 2013 season debuts at the place sometimes referred to as “an oasis of tranquility carved out of a desert.”

In five previous appearances at the Abu Dhabi HSBC Championship, McIlroy has four top-5 finishes and two runner-ups (2011 and 2012). In his last 19 rounds, McIlroy’s shot in the 60’s 14 times. If there’s anyone in the field due for a win here, it’s McIlroy.

“It’s an exciting time and I’m very happy with everything that’s going on and just looking forward to getting out on the golf course and putting the new clubs and new equipment into play,” said McIlroy in a tournament press conference.

On an Abu Dhabi Golf Course with long, narrow fairways and well bunkered greens, McIlroy would seem to possess the vital ingredients needed to pick up a win. McIlroy ranked fifth in greens-in-regulation (77.8% percent) in 2012 and second in driving distance (302 yards). And on the 32 par-5 holes played in 2012, McIlroy carded 3 eagles and 14 birdies en route to a ridiculous 4.38 scoring average.

“It’s a golf course that I feel suits me,” McIlroy said.

Still, the question remains, will McIlroy be hurt by a departure from the Titleist equipment he used to dominate two major championships? McIlroy’s new Nike irons and wedges are the same style he’s played his entire career, with the same shafts he used last season. But the driver, 3 wood, 5 wood and putter are different, which could take time for the 23-year-old to get used to.

There’s a psychological benefit to having clubs you’re confident hitting because quite simply — you’re used to hitting them. That’s a luxury McIlroy will not have in the Abu Dhabi desert.

Woods, meanwhile, has an excellent track record in season openers. He’s won six times in 16 years as a professional in his first tournament out of the gate. And Woods nearly won in Abu Dhabi last year, firing three solid rounds (highlighted by a third round 66) before a final round 72 left him just short on Sunday.

Perhaps most importantly, Woods comes into the new season with the benefit of having finally played a full schedule last year (the first time he’s done that since 2007). And if you believe Tiger, that’s a big reason he turned the corner and returned to form in 2012.

If the Abu Dhabi HSBC Championship comes down to who plays the par-5s best, Woods might be at a distinct disadvantage going head to head with McIlroy. Woods 4.81 scoring average on par-5s was nearly one-half stroke higher than McIlroy.

Robert Rock returns to defend his Abu Dhabi HSBC title, where he held off both McIlroy and Woods last season to earn his second professional career victory. And after a relaxing winter break, Rock is refreshed and ready to go.

“I had a nice time off [and got a] week’s worth of practice in,” Rock said. “The only goals I set are what I want to improve on in my own game. The rest will take care of itself.”

Rock finished in 24th place last week at the Volvo Golf Champions and is optimistic he can improve on that this week at Abu Dhabi. But overall, Abu Dhabi has not been kind to Rock. In four other attempts, Rock’s best finish was only good enough for 47th place.

A number of other marquee players looking to make noise are World No. 5 Justin Rose, 2012 Open Champion Ernie Els and three-time Abu Dhabi winner Martin Kaymer. Rose is making his Abu Dhabi debut this week, and has quietly developed into one of the game’s best players. Rose excelled in greens-in-regulation and driving accuracy stats in 2012, and he’s taken McIlroy and Woods down before. It wouldn’t be shocking to see him do it again this week.

At 43 years-old, Els remains formidable off the tee. And if Els can maintain a good greens-in-regulation number on the weekend, he should be at the top of the leaderboard on Sunday.

Even with past champions and big name players with impressive pedigrees who can win this week, the story of course will remain Rory and Tiger. McIlroy and Woods will be grouped together for at least the first two rounds, and it’s quite possible they’ll be paired together on Sunday as well. And if that happens, how does Rory think his “friend” Tiger will handle it?

“[Tiger] is going to try to beat my brains out,” McIlroy said. “I know that. I’m trying to do the same.”

No, that doesn’t sound like a rivalry at all.

On the range photos: Humana Challenge