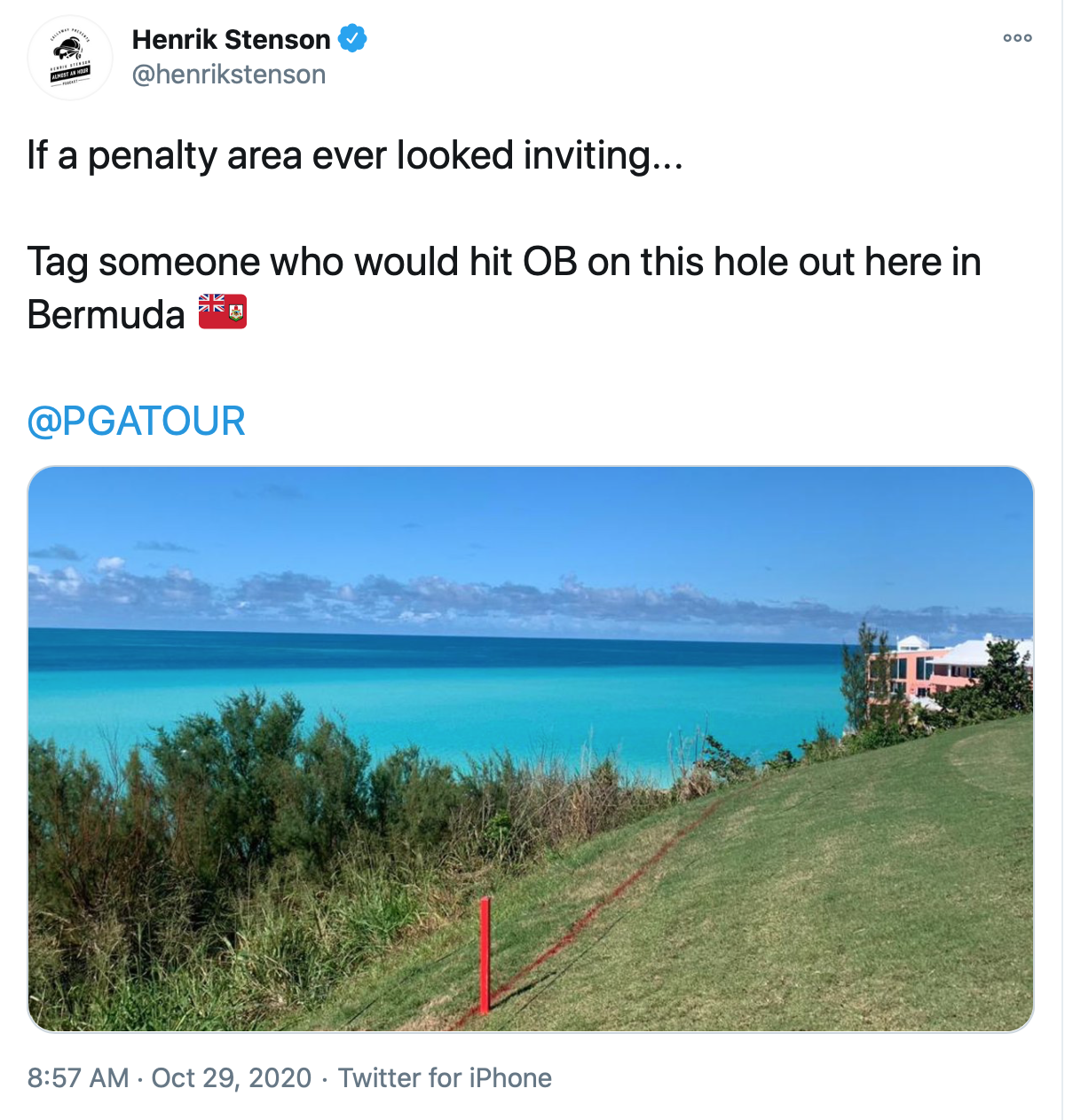 This is really cool…

Don’t ever sleep on Corey Pavin…….

A shot so impossible it can only be done once. ?

Hit it far or go away?

If you can’t hit the long ball, the game has passed you by! It’s ALL ABOUT THE LONG BALL! pic.twitter.com/vWZBGDu7uT

If a penalty area ever looked inviting…

Tag someone who would hit OB on this hole out here in Bermuda ?? @PGATOUR pic.twitter.com/sH1pCwhDaw

Tiger congratulates U.S. team on Ryder Cup victory; Will he be the 2023 captain? 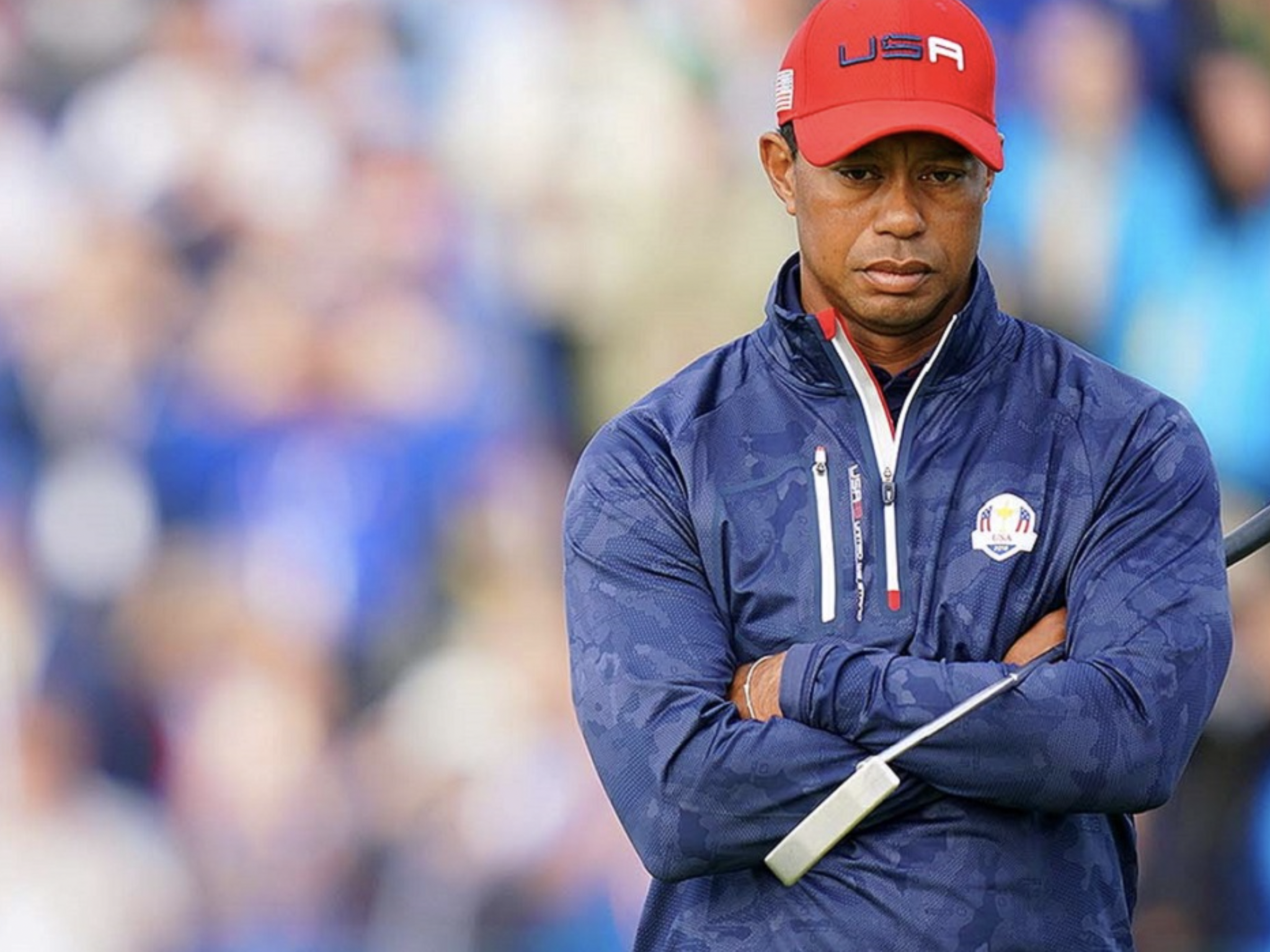 While Tiger Woods was unable to attend last week’s Ryder Cup, he was quick to congratulate the U.S. team via Twitter.

A dominant performance by @RyderCupUSA! I can’t wait to see and celebrate with all of you! Congrats to all the players, Vice Captains and of course Captain @stevestricker. pic.twitter.com/Xc0AsFzet2

Woods is still recovering from significant leg injuries sustained in a single car crash last February, and when he will actually return to a golf course remains speculative at this current moment. With that being said, it’s fair to imagine how Woods would fare in a Ryder Cup captain’s role.

Last year, Kevin Na appeared on Sky Sports UK to share his Ryder Cup ambitions, and in the process, he dropped a major hint that Woods could be headed towards that role in 2023.

Na said in the interview, “My goal is to make the Ryder Cup team this year, and I know the following Ryder Cup is in Italy and the captain I believe is Tiger Woods, so that’s another thing that I’m looking forward to.”

When the reporter asked the 36-year-old if he could confirm that Woods in fact has already been selected as the official team captain for the 2023 Ryder Cup, Na quickly backtracked, “I heard rumors! Am I starting a rumor? That’s what I heard. Am I not supposed to say anything? I don’t know, I’ve heard rumors! I won’t tell you who I heard them from, but it wasn’t from him. It was from one of his friends.”

Woods has played in a total of 37 matches across eight different Ryder Cups, and he carries an all-time record of 13-21-3. The 15-time major champion was last seen on a golf course in December of 2020 at the PNC Championship, competing alongside his 12-year-old son, Charlie.

U.S. and European teams party together after Ryder Cup 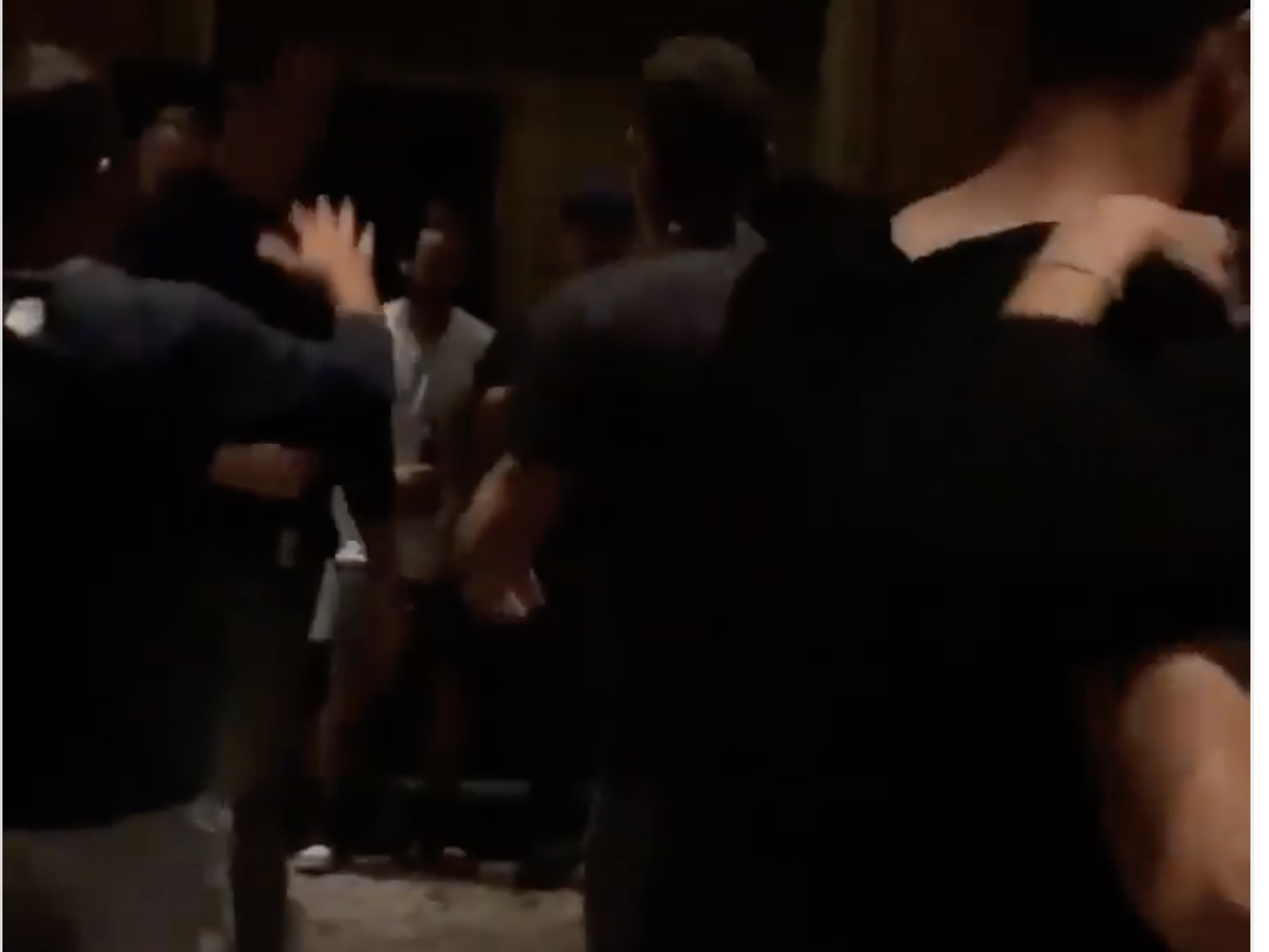 On Sunday afternoon, the United States team put the finishing touches on a dominant 19-9 victory over Team Europe in the 43rd Ryder Cup at Whistling Straits in Kohler, Wisconsin. Coming off a brutal defeat in France in 2018, this was an undeniably exceptional performance from a U.S. team that featured six rookies, who combined for a 14-4-3 record.

As one would expect, it did not take long for the alcohol to start flowing and the celebration to begin. Austin Kaiser, caddie for Xander Schauffele, took to Instagram on Sunday night to share a video of the U.S. team partying. Of course, Xander was tagged, but interestingly enough, Rory McIlroy was tagged as well.

It’s hard to make out in the video who the dancing people actually are, but we can safely assume that Kaiser was alluding to the fact that both teams were partying together.

While the U.S. and European teams were enemies on the course, the Ryder Cup has always strived to be golf’s finest display of sportsmanship and community. The team aspect of the event has always served as a breathe of fresh air for one of the world’s most individualized sports.

While the European team will be the first to admit that they did not play their best golf, there is no shame in defeat when considering the plethora of talent that the U.S. side had at their disposal.

The 44th edition of the Ryder Cup is set to be held in 2023 at Marco Simone Golf & Country Club near Rome, Italy, where the American team will have an opportunity to retain their trophy. 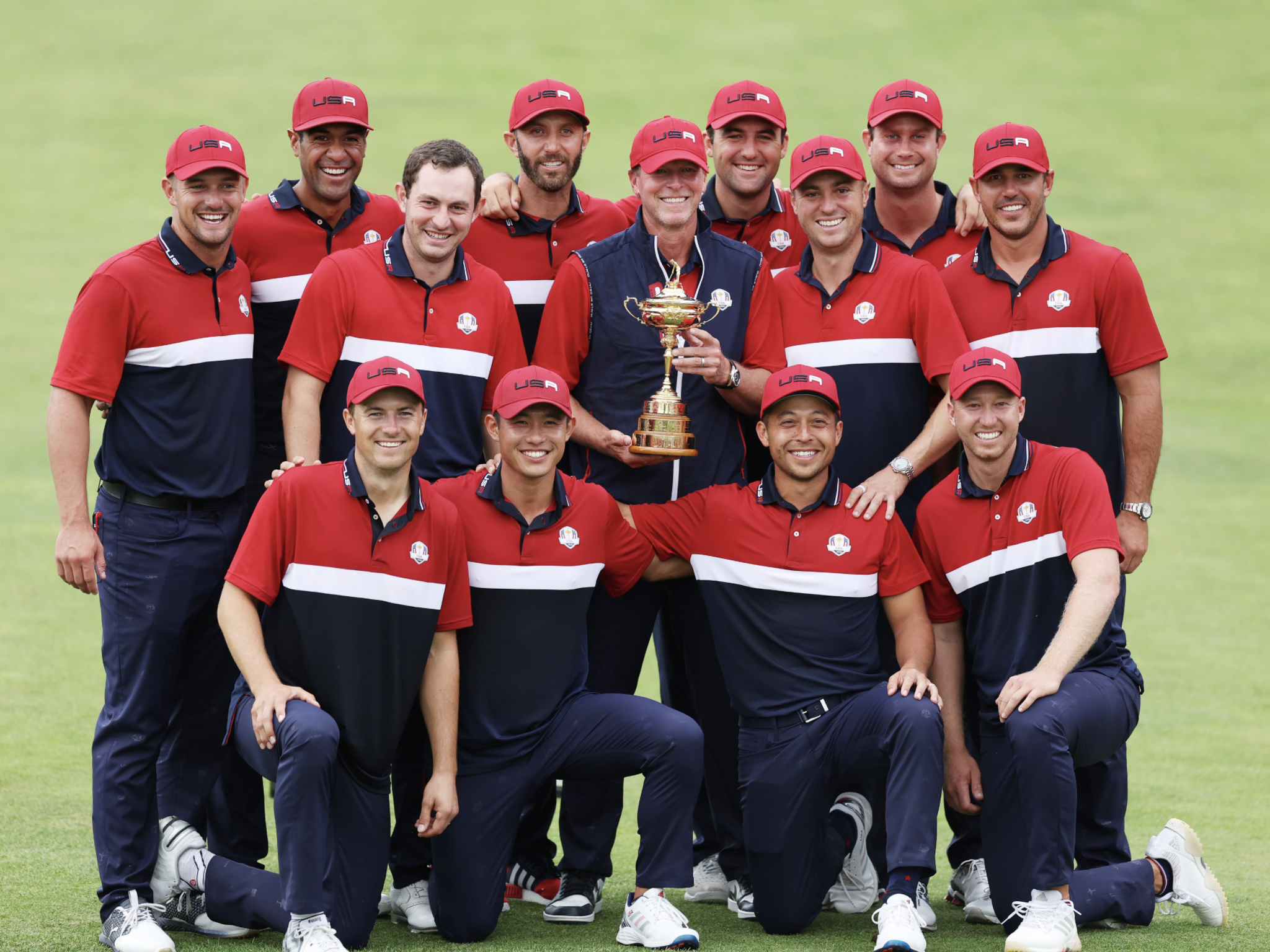 The U.S. recorded the biggest margin of victory in Ryder Cup history at Whistling Straits, dominating the European side all three days to win 19-9.

It was an incredible display by the U.S. youngsters and a chastening experience for Team Europe, with some veterans on the side likely to have competed in their final Ryder Cup.

Here we take a look at each player and rate their performance for the week at Whistling Straits.

Patrick Cantlay: Three and a half points out of a possible four, as Patrick Cantlay continues to impress. Looks as calm and confident in his ability as anyone these days, and while his singles match against Shane Lowry was touted to be close, the 29-year-old bossed the Irishman. 9

Collin Morikawa: Perfect in team play, proving to be the ideal partner for both DJ and Cantlay, and his half a point against Europe’s best young gun in Viktor Hovland capped a top showing by the Californian. 8.5

Bryson DeChambeau: Whether it was drives of over 400 yards or strutting off the first tee Sunday with a putter in hand, Bryson was at his very best last week. Dominated arguably the best Ryder Cup player in history in singles, and alongside his teammate Scheffler he was the only player who could deny World Number One Jon Rahm in team play. 9

Scottie Scheffler: There’s stepping up to the plate, and then there’s doing what Scottie Scheffler did over the weekend. Excelled in team action with Bryson DeChambeau, and then the rookie went out against the best player in the world and put him to the sword 4&3. Sensational performance. 9.5

Xander Schauffele: Phenomenal in team play, taking three points from a possible three and looks like he could partner anyone and get the best out of them. Suffered a hefty defeat in Sunday singles but had done his part brilliantly in forging the USA’s monstrous lead by then. 8

Harris English: Looked excellent alongside Tony Finau in taking down the Irish duo of McIlroy and Lowry on the opening day, but that was as good as it got for the 32-year-old who lost his Saturday fourball and Sunday single matches. 7

Daniel Berger: Another man who justified his Captain’s pick, ending the week with a winning record thanks to his single’s victory where he played the tricky anchor match. 8

Justin Thomas: Started slow but rode a wave of confidence bordering on arrogance and ended up delivering the goods. Played four times, and while he won just once in team play, JT’s crushing defeat of Tyrrell Hatton on Sunday was a statement win. 8

Jordan Spieth: Played four times and ended up on the winning side of those matches just the once. Earned half a point on Sunday, which means he’s still yet to taste victory in single’s RC action. 7

Brooks Koepka: Began the event with a nice win but struggled on Saturday, where he went 0-2 in team action. Stepped up on Sunday with a strong showing. Has the feel of a guy you’d dread to be paired against in singles play. 7.5

Steve Stricker: From his captain picks to his pairings to the course setup, Steve Stricker got everything right when in the build-up to the event many had their doubts. Captained the most dominant Ryder Cup team ever. Enough said. 10

Matthew Fitzpatrick: Played three and lost them all. Has now played a total of five matches across two Ryder Cups and still hasn’t earned even half a point. Doesn’t look cut out for the competition. 3

Tommy Fleetwood: Fought hard but was only able to earn a point from his three matches in Wisconsin. Hard not to feel he was underplayed, particularly in foursomes where his omission both days raised some eyebrows. 4.5

Sergio Garcia: Another strong showing at the Ryder Cup for Sergio, who excelled alongside his fellow countryman Jon Rahm. Perfect in team play, but couldn’t handle Bryson on Sunday in a match that was more one-sided than anyone expected. 7.5

Tyrrell Hatton: Looked flat all week which was a surprise for a player that gets amped up quite often on Tour. Earned one and a half points in team play, but when Europe needed him on Sunday, he offered nothing as JT ran over the Englishman. Highlight was a stunning shot on 18 to earn half a point on Friday afternoon. 4.5

Paul Casey: Played four and lost four. Really poor performance from Casey, who despite his experience, looked out of his depth at times. 3

Rory McIlroy: Failed to contribute anything in three appearances in team play. Was bitterly disappointed in his performance in a very honest interview on Sunday. Did show up and perform admirably in singles action, but his assessment of his contribution over the week was correct; he needed to do much more. 4

Viktor Hovland: Didn’t play particularly poorly, but when you play all five matches and bring home just one point, it must go down as a big disappointment. Will learn a lot from his experience at his first Ryder Cup. 4

Shane Lowry: Trusted just the three times by his captain, Lowry delivered a great moment on Saturday on 18 to win his match, but that was as good as it got. Comfortably defeated in Sunday’s singles. 4.5

Jon Rahm: Showed he’s now the European leader with a strong display, particularly in team play. Earned three and a half points from a possible four over the first two days, which was a top, top display against this U.S. side. Ran out of gas on Sunday in a surprising upset. 7.5

Lee Westwood: Likely to be Westwood’s final Ryder Cup, and while he offered very little over the opening two days, it was nice to see him pick up a point, albeit a pretty meaningless one, on Sunday. 4.5

Bernd Wiesberger: A very tough debut at the Ryder Cup for Wiesberger, who went 0-3 in Wisconsin. You’d hope he’d be better for the experience. 3.5

Ian Poulter: Credit to Poulter, put him out in Sunday’s singles, and he’ll will himself to a point against anyone it seems. Sadly his days look numbered as a competitor at the event, however, as he looked miles off it in the team format. 4.5

Padraig Harrington: Didn’t get much right, offering himself fewer captain picks than his adversary, some odd pairings, and not picking Fleetwood for foursomes was a strange one. In his defence, if he had done everything perfectly, he’d still have been on the losing side. 4