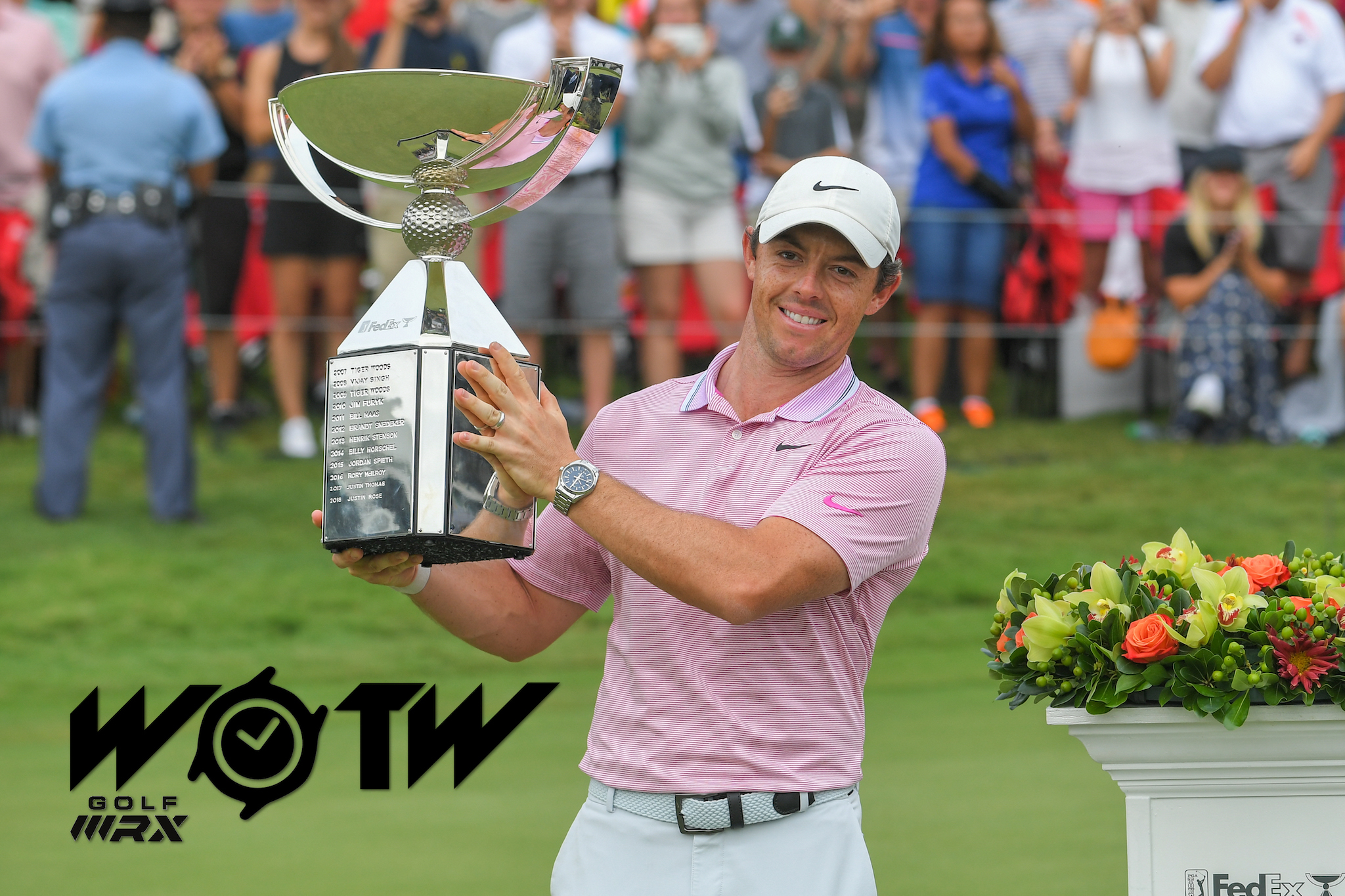 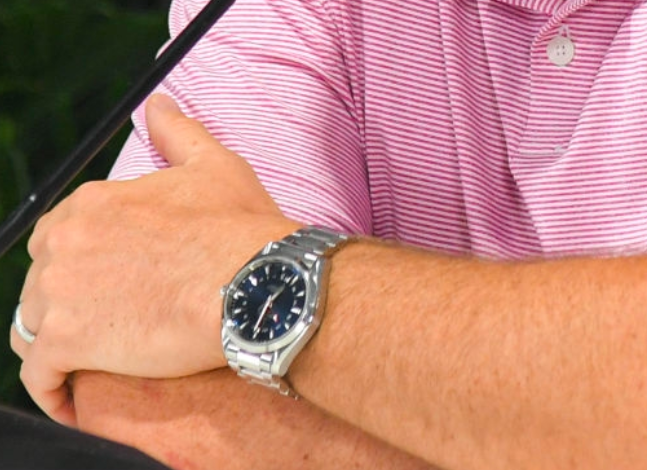 On Rory McIlroy’s wrist this week was an Omega Seamaster Aqua Terra 150M Co-Axial GMT watch in stainless steel. While Rory wasn’t a master of the sea this weekend, he was the master of East Lake and took home golf’s largest prize, $15,000,000. It was a great final round where Rory held of the best players in the world to capture his second FedEx Cup.

Omega was started in 1848 by Louis Brandt in La Chaux de Fonds, Switzerland. From that small, modest shop they have become one of the biggest names in watchmaking and even the official timekeeper of the Olympic Games. Rory has been on Omega’s team since 2013—and on WOTW before—with a vintage Speedmaster Professional Apollo XI 20th Anniversary from 1989.

The Omega Seamaster series was first introduced in 1948 to celebrate the 100-year anniversary of Omega. The first Seamaster models were inspired by watches Omega had made for the British armed forces. Since then the Seamaster collection has included everything from professional dive watches to elegant dress watches. The Omega Seamaster Aqua Terra series is a combination of the two, offering a durable timepiece that can dive to 150m while touting a sleeker and more formal look. The Aqua Terra series of watches look just as good under the sleeve of a suit as they do with a t-shirt and shorts on the beach. 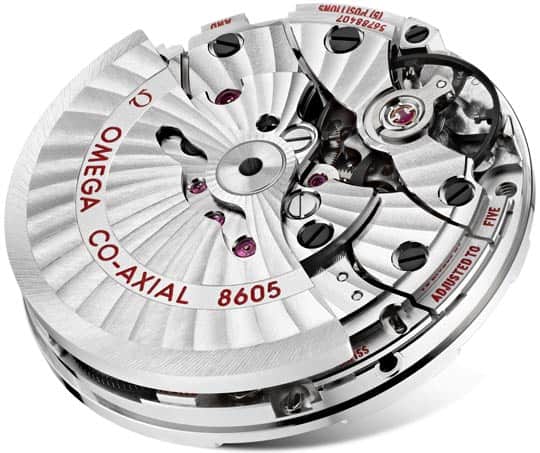 Rory’s Seamaster is 43mm but has a slimmer design that wears a little smaller than its size. Made of stainless steel, the case and bracelet go well with the Teak Concept blue dial, covered by an anti-reflective domed sapphire crystal. This Seamaster is a GMT model, offering the ability to track two timezones, the second being displayed with a small hand with a bright red accent.

Under the hood is the Omega Caliber 8605 automatic winding movement with 60 hours of power reserve. This movement has a co-axial escapement that produces greater accuracy, while reducing friction, thus requiring less maintenance. The 8605 can be seen through the transparent caseback, including the Geneva Wave design on the rotor. 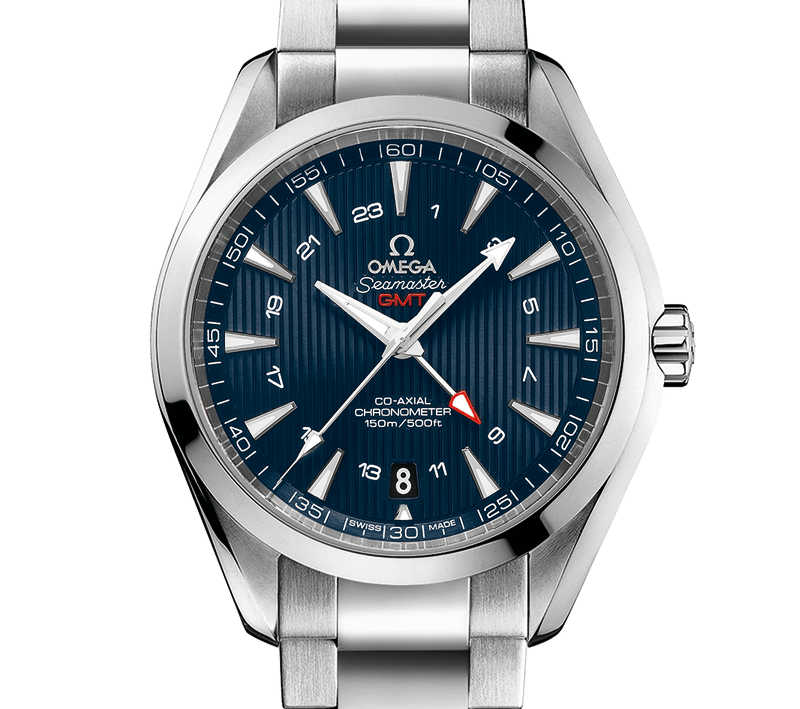 Congrats to Rory McIlroy on a great Tour Championship win to finish off the 2019 PGA Tour season. Holding up that FedEx Cup while wearing an Omega Seamaster Aqua Terra 150M Co-Axial GMT has to feel like $15,000,000!

Note: In addition, on his right wrist, McIlroy had what appeared to be the same WOOP Strap 3.0 Justin Thomas wore at last week’s Players Championship. Details here. 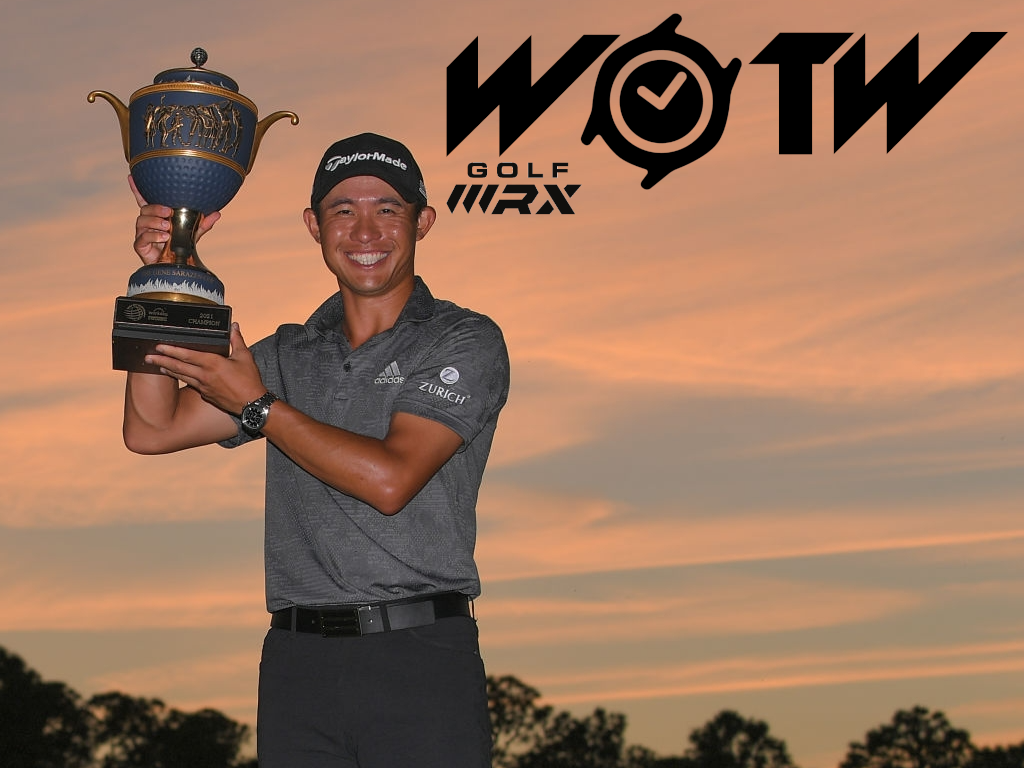 Collin Morikawa is a rising star on the PGA Tour and he proved yet again that he will be a force for a long time. Collin won his first World Golf Championship over the weekend with a 3 stroke win over the fellow youngster, Viktor Hovland. After winning he thanked recently injured Tiger Woods and held that WGC trophy in the air wearing his usually Omega Speedmaster! 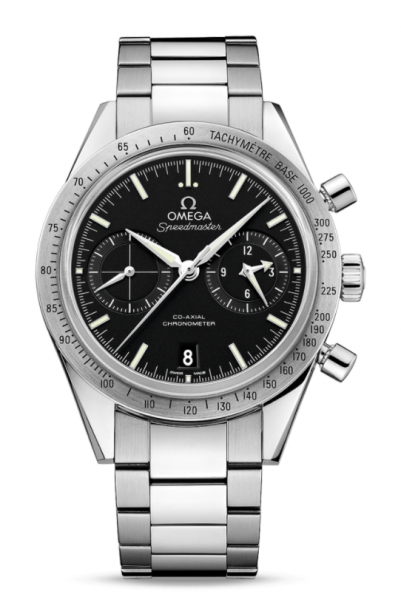 The Omega Speedmaster has been around since 1957 and used for the timing of racing events. Omega has been a staple in racing as they have been the official timekeeper of the Olympics for decades. The current Speedmaster ’57 line pays homage to the original Speedmaster while implementing current technology. Internally the Calibre Omega 9300 self-winding automatic movement contains Omega’s CO-AXIAL escapement for better energy transfer. The 9300 utilizes a silicon balance-spring on free sprung-balance, 2 barrels mounted in series for more efficiency, and a 60-hour power reserve. Protecting the 9300 is a 41.5mm stainless steel case with a large display back to view the movement. On top of the case is a stainless steel bezel with a Tachymeter scale with a brushed finish. The black dial has large, rectangular hour markers filled with luminescent material and the date window at 6 o’clock. The dial also includes two subdials, one at 3 o’clock that is a 12 hour and a 60-minute recorder while the 9 o’clock sub dial is for seconds. A sapphire crystal with anti-reflective on both sides covers the dial and is extremely scratch resistant. Morikawa’s Speedmaster also features a bracelet crafted from flat pieces of stainless steel. those flat center lugs are polished while the outside lugs get a brushed finish for a case-complimenting 2-tone look. The bracelet comes together using a deployment clasp that has a large Omega symbol on it. 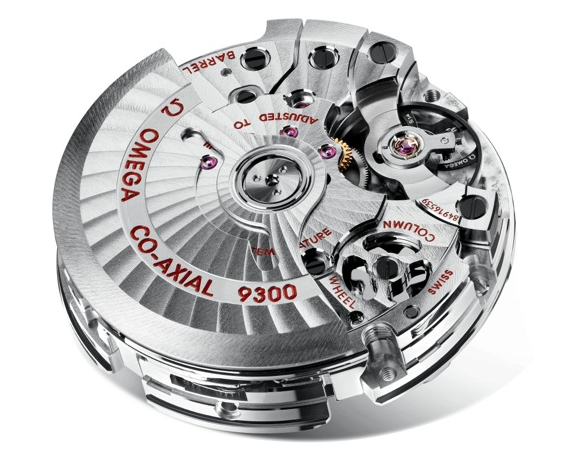 Congratulations to Collin on another big win in his short career. It will be great seeing him continue to win and hopefully build his watch collection! 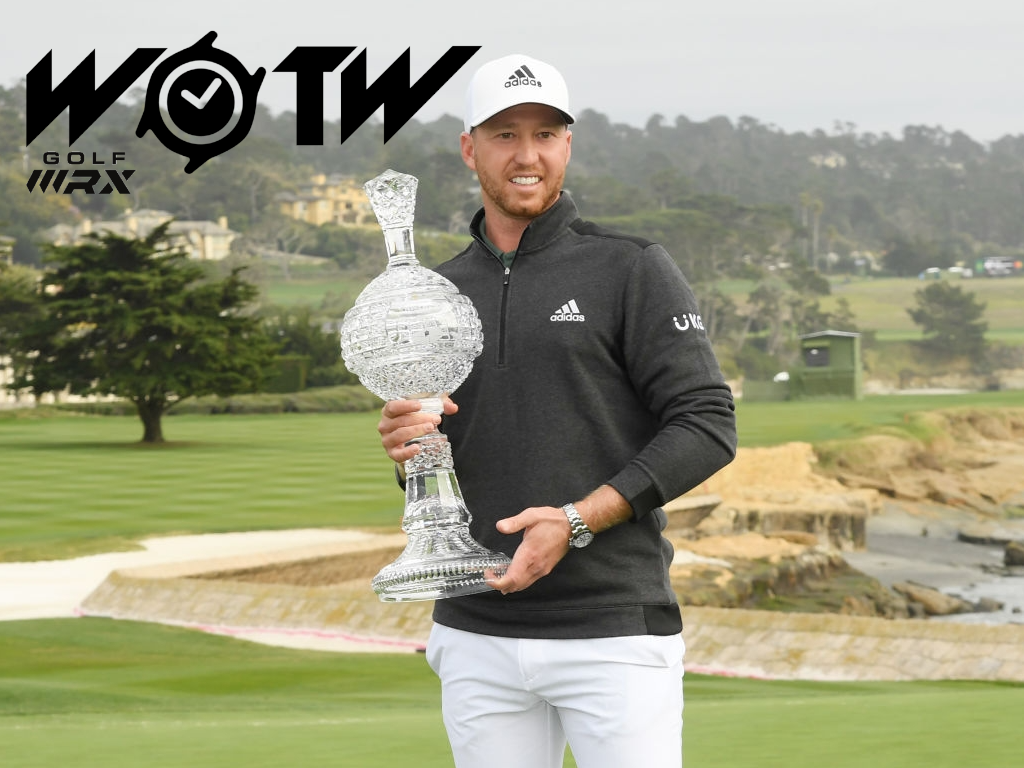 Daniel Berger drained a long eagle putt on the 18th hole at Pebble Beach to claim his 4th PGA Tour win. While Daniel might not use the newest and shiniest clubs on tour, he was wearing one of the most sought after watches in the world on his wrist! He was sporting a Rolex Daytona in black ceramic as he held the trophy high in the ocean air! 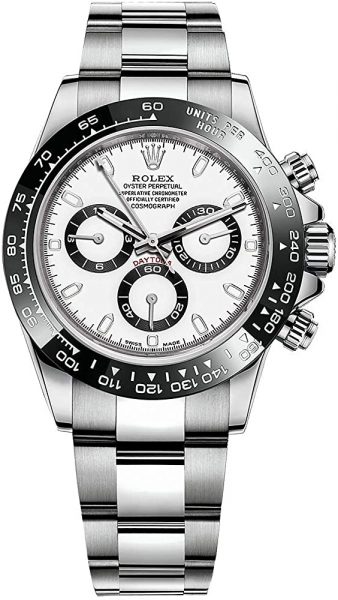 In 1955 Rolex introduced a watch that they simply called the “Chronograph” and it was met by very minimal interest. They made a couple hundred per year up until 1961 when they discontinued the model. Rolex then became the official timekeeper of the famous Daytona race and introduced the Cosmograph in 1962, nicknamed the Daytona. Older and rare Daytonas now easily trade for over $100,000 and some have gone over the $1 million mark. Berger is wearing the latest edition of this famous timepiece, but good luck getting one at your local Rolex dealer. Daytonas are so popular currently that most dealers have closed their waiting lists as it is rumored that they were exceeding a 20-year wait. Now you can still get a stainless still Daytona, like Berger’s, but expect to pay about $18,000 over the retail price. 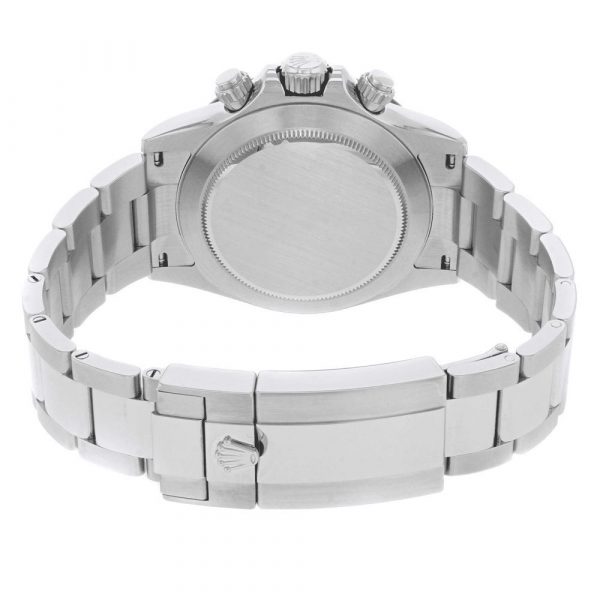 The latest Daytona is a fairly standard 40mm and the Oyster case is made from Rolex’s 904L Oystersteel. Rolex controls all their own alloys and Oystersteel is stainless steel that was created to be extremely rust and corrosion-proof while also taking on a longer-lasting polish. The legendary Daytona dial is hand finished in white and contains white gold hour markers that are filled with Rolex’s Chromalight luminescent material. The 3 sub-dial rings are done in black and lined for a luxurious shine in any light.

The “Daytona” name is printed in red over the 6 o’clock sub-dial and pays homage to the original versions. The dial is covered by a scratch-resistant sapphire crystal and surrounded by another iconic design feature, the ceramic bezel. The Cherachrom ceramic bezel is also extremely scratch resistant and much more durable than the previous stainless steel ring. The bezel features a Tachymetric scale that can measure speeds up to 400 miles per hour.

The 1965 model also featured a black bezel, but it was made from much more fragile Plexiglass. Inside the Daytona is Rolex’s 4130 self-winding, automatic movement that is a certified Swiss chronometer and tested for its precision. The 4130 also contains 44 jewels and offers 72 hours of power reserve. The Rolex Oyster bracelet is crafted from matching 904L Oystersteel and was first used on Rolex models from the 1930s. The bracelet has an Oysterlock folding clasp and Rolex’s Easylink extension link for easy adjustments. 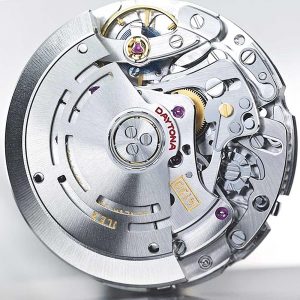 While the Pebble Beach Pro-Am wasn’t the same without the amateurs, it was a great weekend of golf with unmatched ocean views. Congrats to Daniel Berger for his win, but maybe more so for getting his hands on a coveted Rolex Daytona! 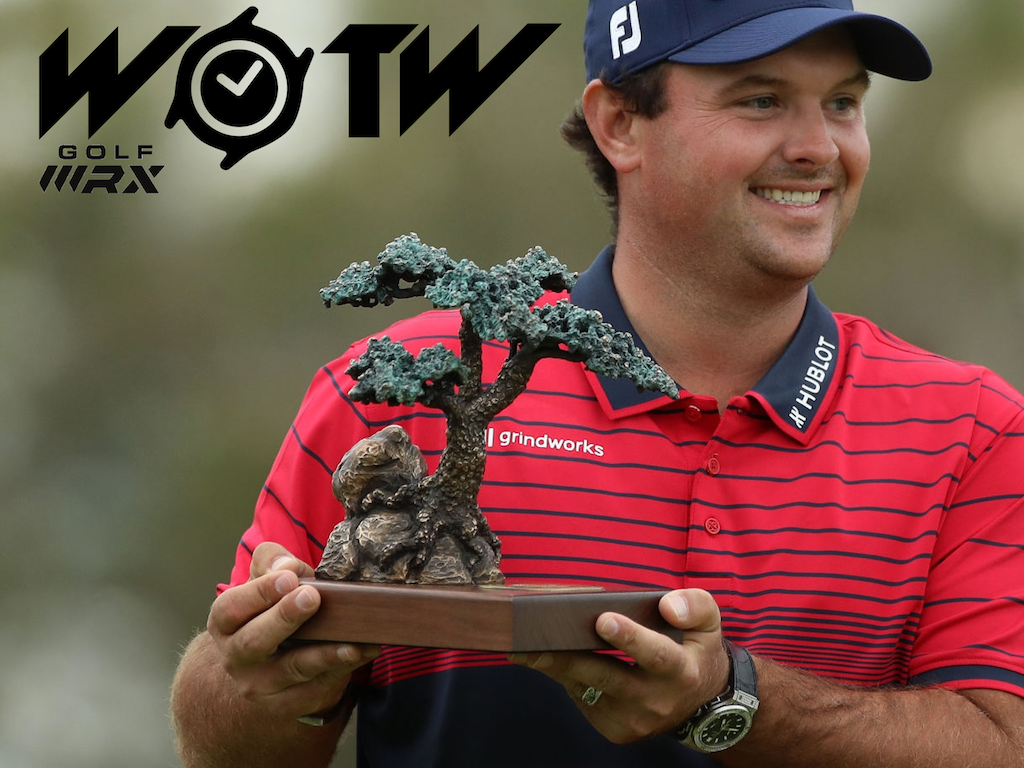 Patrick Reed won his 9th PGA Tour event at the Farmers Insurance Open at Torrey Pines, and when he held up that trophy and his Hublot Big Bang Pavé outshined everything else in the Southern California sun. 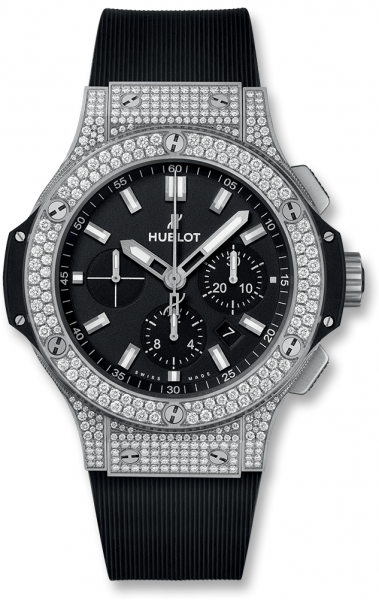 Reed has a thing for flashy watches—just take a look at his white ceramic Hublot Ferrari—and this Pavé is about as flashy as you can get.

The Hublot Big Bang Steel Pavé is a stainless steel timepiece that is then factory set with diamonds on the case and bezel. The 44mm case and fixed bezel are created from stainless steel and use a combination of satin and polished finishes. The highlight of both pieces is the combined 2.47 carats of diamonds that are then set into each part. The diamonds they use are sourced from all over the world and are Top Wesselton grade for uniformity and quality. The 326 diamonds are set into the case and bezel using the “grain” method where 4 small claws hold the diamond in place. This is all hand done by Hublot and produces a sparkling look that stands out on any wrist.

The diamond-covered bezel is held in place by 6 H-shaped titanium screws that have become an iconic design in Hublot watches. The chronograph dial is finished in matte black with matching sub-dials at 3, 6, and 9 o’clock. On the outside of the dial are stainless steel hour markers that are filled with luminescent material for low light reading. This is all covered by a scratch-resistant sapphire crystal that is treated with an anti-reflective coating for easy reading in direct sunlight. 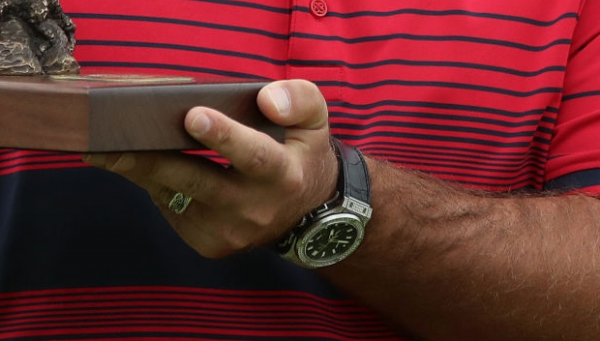 Inside the Big Bang Steel Pavé is a self-winding HUB4100 automatic movement with 25 jewels and 42 hours of power reserve. The HUB4100 movement can be seen through the display back case that is held tight with 6 traditional screws, giving the watch a 100-meter water resistance rating.

From what I can tell, the Big Bang Steel Pavé comes with a lined rubber strap, but Reed has opted for the Black Alligator upgrade. The Black Alligator strap has a backing of rubber and matching black stitching on the perimeter. Hublot makes it easy to swap out straps on this Big Bang, with just 4 H-shaped screws holding it in place. The strap comes together with a matching stainless steel deployment buckle clasp to securely hold it in place. 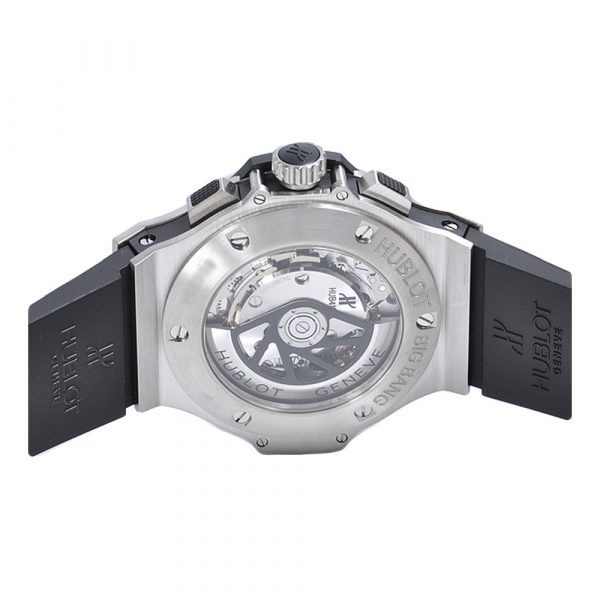 Patrick is one gritty player who can overcome some controversy, and he proved that again on Sunday. I know a lot of fans don’t agree with what happened on the course, but we can all agree that his Big Bang Pavé is something unique.