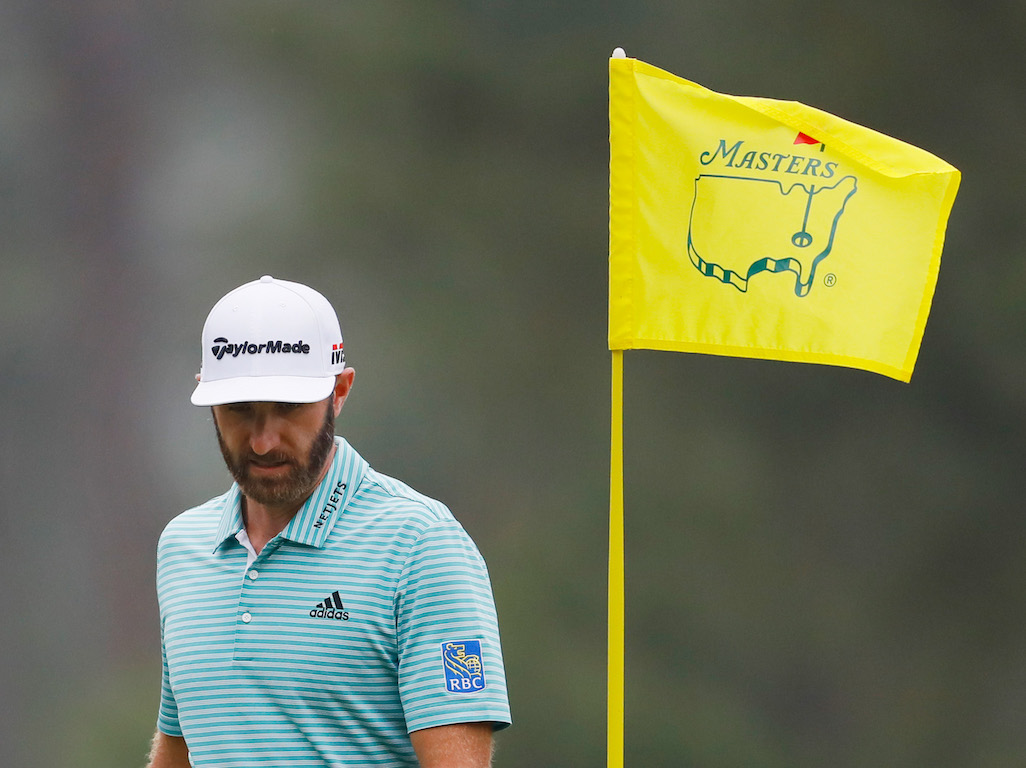 Each year for the Masters, I create a filtering process to help determine the players that are most likely to win the green kacket based on criteria that has strongly predicted outcomes at Augusta. I usually get the list down to roughly 23 players. Last year, I had Patrick Reed as one of my 20 players that could win the Master and he won the green jacket despite being a long shot at 40/1 odds.

Before I discuss my picks for this year’s Masters, I want to go over what I call the “critical holes” for Augusta National. The critical holes in any tournament are the ones where the top finishers typically gain the most strokes on the field, as well as where the greatest deviation in scores exist. One of the interesting aspects about critical holes is that they often change over time due to changes in the course conditions, course design or a change in player strategy, which can create a smaller deviation in scores. This year, the projected Critical Holes are #6, #8, #13, #14 and #15.

Typically, the critical holes have been projected to be only one of the par-5s. But, the trend over the past five years now has a projection of three par-5s (#8, #13 and #15) being ‘Critical Holes’ which indicates that some added distance gains by the players may be impacting how the event is determined.

I also filtered out 10 past champions that I do not believe can contend at Augusta National anymore:

When Johnson won the Masters in 2007, the event featured record-low temperatures in the mid-40s and wind gusts of 33 mph. This made it very hard for any player to reach the par-5s in two shots and allowed Johnson to get into a wedge contest on the par-5s, his strength.

This year, the forecast calls for temperatures in the high 70s to low 80s. There is some rain in the forecast, but softening the course tends to favor the longer hitters. However, the winds are expected to pick up a little which can help the shorter hitters, particularly those that are adept around the greens. However, I do not see the forecasted wind being enough to favor shorter hitters in this event. Thus, the following golfers have been filtered out due to not being long enough off the tee:

A part of the game that is just as critical as distance is the trajectory height a player can create. Last year, I filtered out four players for hitting the ball too low. Out of those four players, the best finish was Russell Henley at T15th. I use a combination of Max Height, Carry Distance and Launch Angle to determine if the following players hit the ball too low to win at Augusta.

I will also filter out the player that missed the cut at San Antonio. Historically, players that miss the cut the week prior have a substantially lower likelihood of winning the following week compared to the players that made the cut in the previous week or did not play at all.

The key shots where the most strokes are gained/lost at Augusta National are from the Red Zone. Last year, I had 12 players filtered out for poor Red Zone play. Outside of Dustin Johnson (T-10th), almost all of those players performed poorly.

I think the big surprise here is Justin Thomas. His Red Zone play has not been awful (108th) this season, but it not good enough in order for me to avoid filtering him out.

Now we are down to 22 golfers that can win The Masters. Their Vegas odds, which are subject to change, are listed in parentheses:

Here are my personal top-10 picks:

Hot & Cold: Where strokes were won and lost at the Valero Texas Open

The Wedge Guy: Why wedge mastery is so elusive 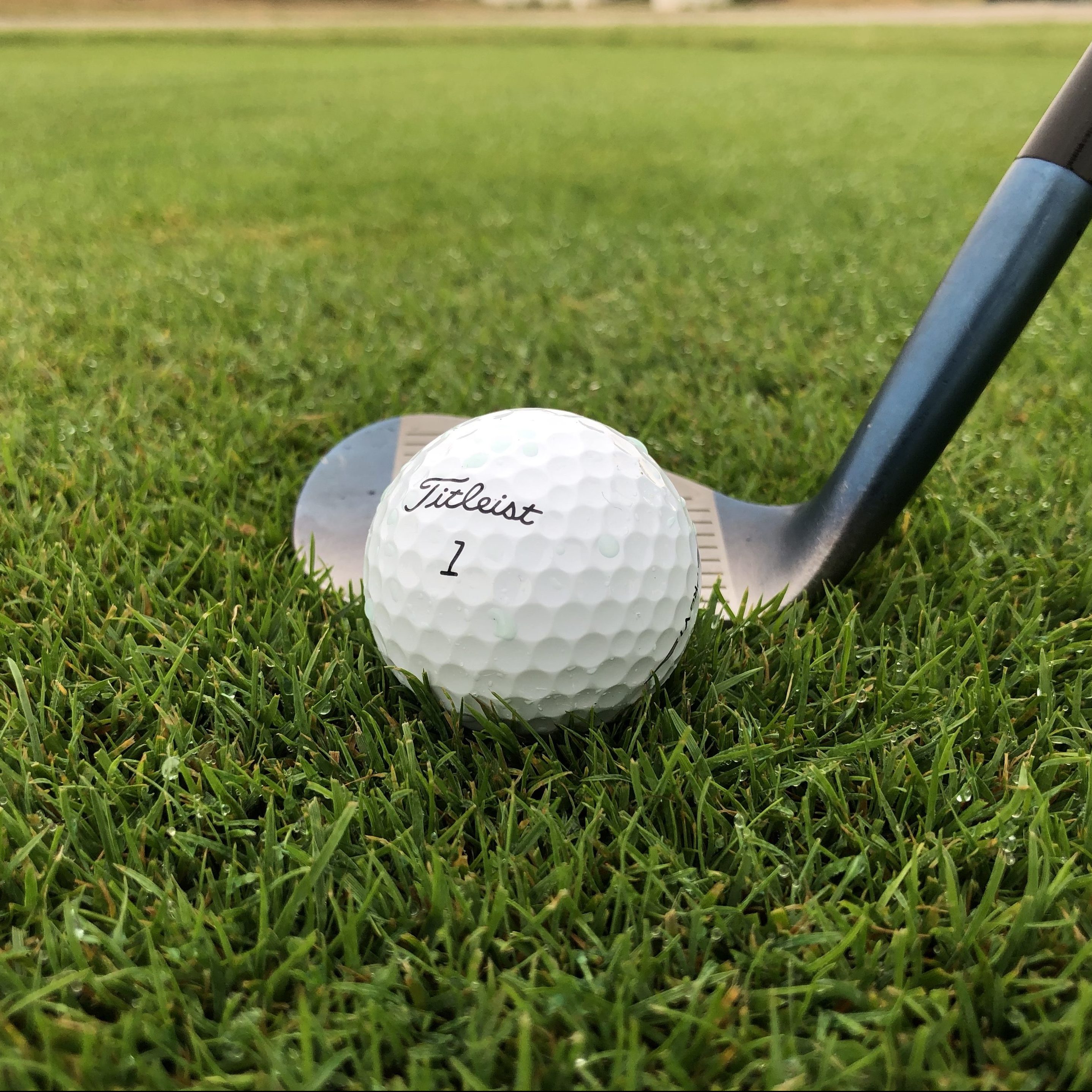 I have conducted numerous surveys of golfers over my 40-year golf industry career, because I have always believed that if you want to know what people are thinking, you simply have to ask them.

As a gearhead for wedges and a wedge designer over the past 30 years, most of my research and analysis is focused on these short-range scoring clubs and how golfers use them. What this research continually tells me is that most golfers—regardless of handicap–consider the wedges the hardest clubs in the bag to master. That’s because they are. I would even go so far as to say that the difficulty of attaining mastery even extends to the best players in the world.

Watching the Genesis Open this past weekend, for example, it seemed like these guys were hitting wedge approaches on nearly every hole. And while there were certainly many shots that covered the flag—like Max Homa’s approach on 18–there were also a great number that came up woefully short. Not what you would expect when a top-tier tour professional has a sand or gap wedge in their hands.

The simple fact is that wedges are the most difficult clubs in our bags with which to attain consistent shotmaking mastery, and that is because of the sheer design of the clubhead itself. For clarity of this article, I’m talking about those full- or near full-swing wedge shots, not the vast variety of short greenside shots we all face every round. To get mastery of those shots (like the tour pros exhibit every week), you simply have to spend lots of time hitting lots of shots, experimenting and exploring different techniques. There are no shortcuts to a deadly short game.

But today I’m talking about those prime opportunities to score, when you have a full- or near-full swing wedge into a par-five or short par four. We should live for those moments, but all too often we find ourselves disappointed in the outcome.

The good news is that’s not always all your fault.

First of all, you must understand that every wedge shot is, in effect, a glancing blow to the ball because of the loft involved. With 50 to 60 degrees of loft—or even 45 to 48 degrees with a pitching wedge—the loft of the club is such that the ball is given somewhat of a glancing blow. That demands a golf swing with a much higher degree of precision in the strike than say, an 8-iron shot.

I have always believed that most golfers can improve their wedge play by making a slower-paced swing than you might with a longer iron. This allows you to be more precise in making sure that your hands lead the clubhead through impact, which is a must when you have a wedge in your hands. Without getting into too much detail, the heavier, stiffer shaft in most wedges does not allow this club to load and unload in the downswing, so the most common error is for the clubhead to get ahead of the hands before impact, thereby adding loft and aggravating this glancing blow. I hope that makes sense.
The other aspect of wedge design that makes consistent wedge distance so elusive is the distribution of the mass around the clubhead. This illustration of a typical tour design wedge allows me to show you something I have seen time and again in robotic testing of various wedges. 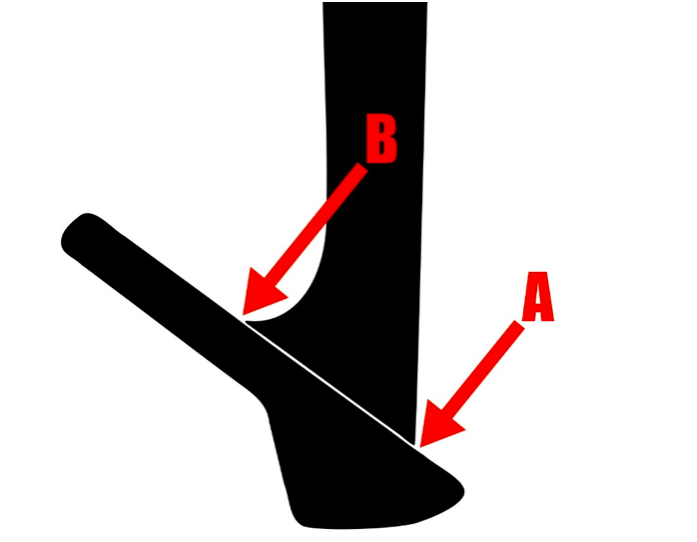 Because all the mass is along the bottom of the clubhead, the ideal impact point is low in the face (A), so that most of the mass is behind the ball. Tour players are good at this, but most recreational golfers whose wedges I’ve examined have a wear pattern at least 2-4 grooves higher on the club than I see on tour players’ wedges.

So, why is this so important?

Understand that every golf club has a single “sweet spot”–that pinpoint place where the smash factor is optimized—where clubhead speed translates to ball speed at the highest efficiency. On almost all wedges, that spot is very low on the clubhead, as indicated by the “A” arrow here, and robotic testing reveals that smash factor to be in the range of 1.16-1.18, meaning the ball speed is 16-18% higher than the clubhead speed.

To put that in perspective, smash factor on drivers can be as high as 1.55 or even a bit more, and it’s barely below that in your modern game improvement 7-iron. The fact is—wedges are just not as efficient in this measure, primarily because of the glancing blow I mentioned earlier.

But–and here’s the kicker–if you move impact up the face of a wedge just half to five-eights of an inch from the typical recreational golfer’s impact point, as indicated by the “B” arrow, smash factor on ‘tour design’ wedges can be reduced to as low as 0.92 to 0.95. That costs you 40 to 60 feet on a 90-yard wedge shot . . . because you missed “perfect” by a half-inch or less!

So, that shot you know all too well—the ball sitting up and caught a bit high in the face—is going fall in the front bunker or worse. That result is not all your fault. The reduced distance is a function of the diminished smash factor of the wedge head itself.

That same half-inch miss with your driver or even your game-improvement 7-iron is hardly noticeable.

Golf’s Perfect Imperfections: Breakthrough mental tools to play the golf of your dreams

Incredibly important talk! A must listen to the words of Dr. Karl Morris, ham-and-egging with the golf imperfections trio. Like listening to top athletes around a campfire. This talk will helps all ages and skills in any sport.