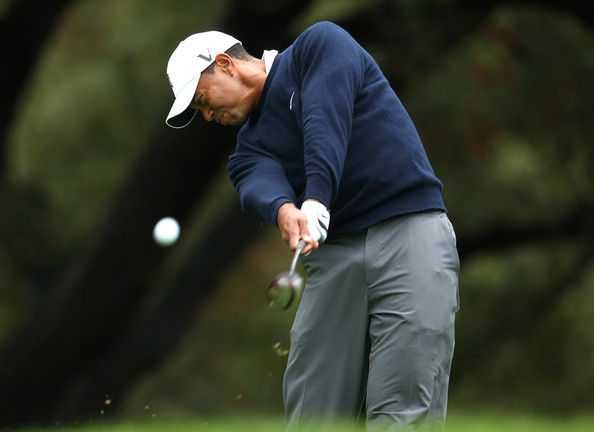 The World Challenge may not be an official PGA Tour event, but the tournament’s timing and stakes have allowed the stop to become meaningful on multiple levels. Tiger Woods, who hosts the benefit tournament for his Foundation, will welcome 17 of golf’s most notable players to Sherwood Country Club in Thousand Oaks, Calif., this weekend in the 14th annual World Challenge presented by Northwestern Mutual.

With the World Challenge falling in what little “off season” professional golfers may have, it has commonly lent itself to act as either a bookend to the current year or a kickstart for the ensuing season. Take just the last three winners, for example. In 2009, Jim Furyk took the crown, sparking his first PGA Tour wins (3) in three years and the FedEx Cup title in 2010. Meanwhile, Graeme McDowell stared down Woods in 2010’s World Challenge, capping off a career year for the Northern Irishman who captured the U.S. Open at Pebble Beach and made the clinching putt in the Ryder Cup the same year. Then, in 2011, Woods stepped back into the winners circle at his event before winning three times on Tour in 2012.

The small, elite field may give it a relaxed feel, but the world’s best are certain to be focused when tees go in the ground Thursday. The 72-hole, no-cut event ensures a paycheck for everyone, with the top prize being $1 million dollars. Moreover, the tournament’s winner will receive 44 Official World Golf Ranking points, a total higher than some Tour events thanks to such an exclusive field.

Phil Mickelson serves as the only absent American Ryder Cupper this week, while McDowell, Ian Poulter and Jason Day provide the international flavor for the tournament. Rickie Fowler, Hunter Mahan, Bo Van Pelt and Nick Watney round out the 18-player field that will take on the 7,025-yard, par-72 track. Sherwood is hosting the event for the 13th-straight year, after the inaugural playing took place at Grayhawk Golf Club in Scottsdale, Ariz.

Woods enters the tournament with a win under his belt for the first time since 2007. After missing the World Challenge in 2008 and 2009, Woods has been in the thick of contention each of the past two years and will look to keep the trend going this week.

In 2010, Woods was denied his first victory in more than 12 months as McDowell rolled in a pair of clutch 20-footers on the par-4 18th hole en route to the victory. Both McDowell and Woods rolled in birdies on the 72nd hole to provide the tournament’s first playoff, but McDowell converted another birdie on the first playoff hole for the win.

Woods once again came to Sherwood without a title in 2011, with his winless streak still extending back to the 2009 Australian Masters. He entered the final round one-shot behind 54-hole leader Zach Johnson, but gained a two-stroke advantage with just seven holes to go. Johnson proved his gritty, bulldog reputation by reclaiming his one-shot lead thanks to birdies on Nos. 13 and 16.

Solid tee shots on the par-3 17th gave both competitors birdie looks inside of 20 feet. After Zach Johnson’s attempt peeked in the hole as it slid by, Woods knocked in a slick putt to keep Johnson’s lead brief. Johnson gave himself a 15-foot birdie attempt on the final hole, but a determined Woods stuck his approach within six feet. With Johnson missing, Woods snapped his victory drought by burying the 6-footer, earning the one-stroke win with a final-round of 3-under-par 69.

For the first time, Woods is looking to lock up a sweep of his hosted events after winning the AT&T National at Congressional this summer. He would have had the chance in 2009, but his Thanksgiving night one-car accident led to his withdrawal from the World Challenge that year.

But, if Woods wants to take the title, he’ll need to fend off his 17 more-than-capable guests in the process. One player Woods held off this season may be a top challenger this week. Van Pelt took second in the AT&T National behind Woods and has played strongly as of late, including a title at the ISPS Handa Perth International in Australia and a tie for second at the CIMB Classic in Malaysia. Van Pelt also proved tough at the end of the FedEx Cup Playoffs, notching a pair of top 10s in the final two events.

Van Pelt isn’t the only recent winner though, as Watney and Poulter have both collected hardware in the weeks of late. Watney edged out Van Pelt at the CIMB Classic, firing a final-round 61 to overcome a four shot deficit for the victory. Watney’s lone Tour win of 2012 also came in the latter portion of the season, as he won the opening leg of the FedEx Cup Playoffs at The Barclays.

Meanwhile, Poulter shot back-to-back rounds of 65 to close out the WGC-HSBC Champions and stand atop the leader board in China. With the makeup of the field, perhaps all Poulter would need to do for another victory is picture the event as another foreign-soil Ryder Cup.

Dufner is another player who has kept his sticks warm through the fall, competing in several international tournaments. Dufner finished second behind Van Pelt in Australia, finished T16 at the CIMB Classic and tacked on a tie for second at the WGC-HSBC Champions. Dufner and 2012 FedEx Cup Champion Snedeker will each be making their first appearance at the World Challenge.

Other players will seemingly have to dust off the clubs for the World Challenge after having a relatively calm fall. Fowler has stayed out of the golf spotlight with his last appearance coming at the Tour Championship, while Steve Stricker took his yearly respite home in Wisconsin after the Ryder Cup. Other players such as Matt Kuchar, Dustin Johnson, Bradley and Simpson have played select low-key events.

No matter how active or inactive players have been of late, Sherwood is likely to produce another solid weekend of golf as the world’s best look to conclude 2012 in fashion or jump start their 2013 season a little early.

On the range photos from the Q-School Finals