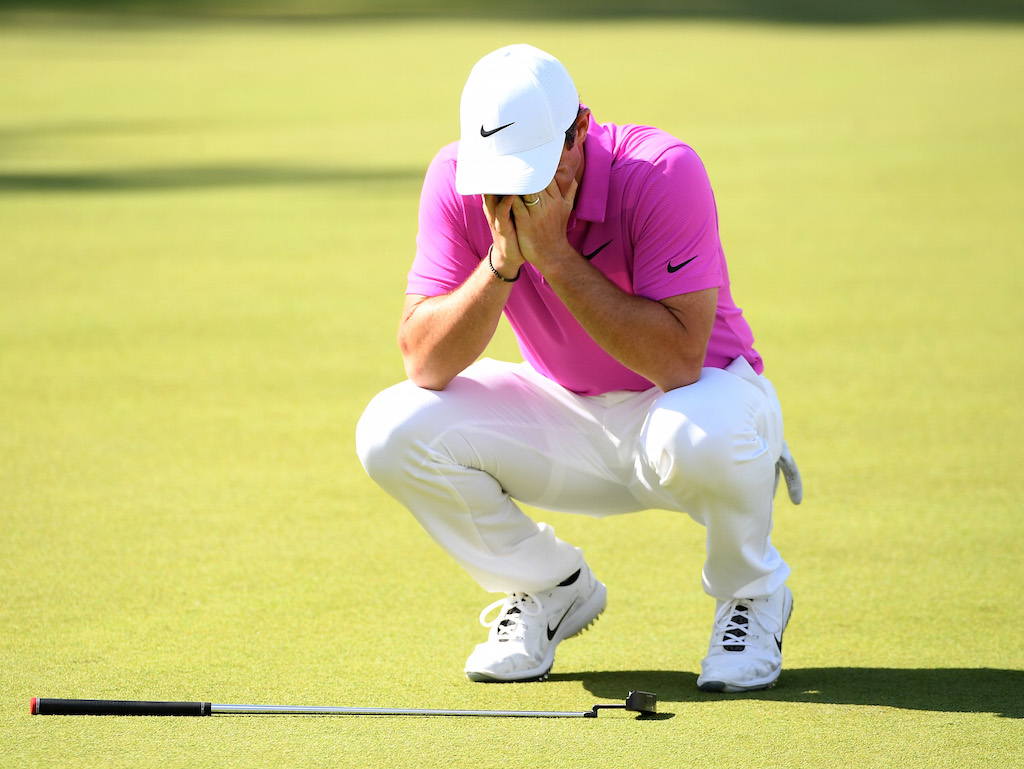 One difficult debate in professional golf is, why are 3 of 4 major championships held each year in the USA? Does Europe deserve two? Probably not. What about Asia, Africa, or South America? See? This week, the European Tour held its PGA Championship, and the best golfers (McIlroy, Cabrera-Bello, Fleetwood, Noren, Poulter, Jaidee) turned up. The LPGA warmed up for the U.S. Open with an event in Michigan, while the Seniors held their PGA championship in the same state. The youngsters finished up the Texas swing, while the Webbies grooved in Nashville. Could May offer a better week of golf? Doubtful. Let’s Rundown those Tours with this week’s TR.

Francesco Molinari did the one thing he needed to do on Sunday to have a chance at victory: he kept a clean card. Four birdies, zero bogies, 68, 17-under par. His co-leader after round 3 had 4 birdies as well, but he also had 2 bogeys. And that is why Rory McIlroy finished second to the Italian champion. The victory was Molinari’s 5th on the European tour, and his first in 2 years. As for McIlroy, much as in this year’s Masters, he had a chance to stake a claim to the title, but failed to do precisely that. Molinari birdied 2 of his first 4 holes, while McIlroy helf off until the 8th to notch a red number. The 4-time major winner than bogeyed his next two holes to drop from contention. His birdie-birdie finish served to vault him into solo 2nd, but his performance was not the one that major champions usually offer. Lucas Bjerregaard of Denmark closed with 65 to tie for 3rd with Sweden’s Alex Noren.

If you can envision a finer, tidier performance than 66-64-66-64, by all means, point it out. Justin Rose, the 2016 Olympic champion and 2013 U.S. Open champion, won his ninth PGA Tour title and second of the wraparound season, by 3 strokes over 2017 U.S. Open winner Brooks Koepka. Both Rose and Koepka bogeyed the 18th hole, but the tournament had been decided by then. Koepka turned in the second-low round of day 4, to finish alone in the runner-up spot. Rose was far from perfect on the week, posting five bogeys in 4 rounds. The inordinate number (25) of birdies that he made did more than compensate for his errors. The only thing he lost all week was a shot at the tournament record of 21-under.

While Rose’s sustained brilliance was unmatched, mention should be made of Kevin Na and his 123. The American opened with 6-birdie, 1-eagle 62, then closed with a 9-birdie 61. His middle rounds were best described as meh, but what lightning he caught in a bottle. Na finished 4th at 14-under, 1 behind Emiliano Grillo.

If Lydia Ko hadn’t pulled a miraculous, playoff-hole eagle out of her visor a month ago, Minjee Lee might find herself with a second win of the season. As it stands, her work in Ann Arbor was better than the rest, allowing her to gain career win number 4 on the LPGA tour and move inside the top 5 of the season-long points race. With In-Kyung Kim and Moriya Jutanugarn attempting to chase her down, Lee bent but didn’t break. She made bogey at the penultimate hole to drop into a tie with Kim, but found the resilience to birdie the last. The rebound allowed her to ease off the final green with the greatest of celebrations, capping off her 22nd birthday in dreamy style.

The final hole at the Travis Pointe country club promises certain drama for the best golfers on the LPGA tour. It’s brevity (only 470 yards) ensures that an accurate drive will offer a run at the green, and a chance at eagle. While none of the top 3 (Lee, Kim and Jutanugarn) succeeded in making 3, each one made birdie to conclude her round. Lee’s was a delicate affair, after her approach missed the green short right, leaving a testy pitch shot. Lee bumped her recovery toss to 2 feet, ensuring her slim margin of victory. Kim moved inside the top 30 of the CME Points Race, while Jutanugarn settled into the 2nd spot, just behind sister Ariya.

Ball striking and putts were ???? for @minjeegolf

Paul Broadhurst has enjoyed a successful month. He teamed with Kirk Triplett in Missouri in April for a victory at the Bass Pro Shops event. This week, Broadhurst exploded on Sunday with 8 birdies for 63, leaving only dust between him and his pursuers. Jerry Kelly might have thought that his second 65 of the week would have catapulted him into contention…think again. The solid effort was enough to garner a tie for 3rd with 3rd-round co-leader Scott McCarron, who closed with a topsy-turvy 71 for 14-under. The other co-leader, Tim Petrovic, fared a bit better. He shot his 4th straight round in the 60s for 15-under, securing solo second. The field was helpless in the wake of Broadhurst, who earned his 4th victory in 4 years on the Champions Tour.

The Englishman began the week at Harbor Shores with a forgettable 72. He improved dramatically with 64 on day two, then continued to excel. A Saturday 64, highlighted by a 6-birdie 30 on the front nine, was followed by Sunday’s 63. Never flinching, never wavering, Broadhurst outdistanced the competition in the manner of a young Ussain Bolt. With the win, Broadhurst surged into the top spot of the Schwab Cup race, advancing 14 places. Kelly moved up 2 spots, from 5th to 3rd, while McCarron elevated by one, into 8th.

Relive some of the great final round moments that helped @pbroadhurstgolf capture his second Senior Major Championship pic.twitter.com/6u9W9AedMn

If you’ve been to Nashville, you know that the convention center is shaped like a guitar. When Cameron Davis was presented with the winner’s trophy on Sunday, it bore … what else? The shape of a guitar, of course. Davis was able to parlay a rare Web start into a victory when defending champ Lanto Griffin could not get stabilize early on day four. Davis played a remarkable pitch-and-run at the last for an up-and-down birdie to eek out the 1-stroke victory over Griffin, Kevin Dougherty and Josh Teater.

Davis went out in 2-under par 34, then turned on the jets with five incoming birdies for 31 and a day-low 65. Griffin had played wonderful golf over the first three days, never rising above 67, in a valiant defense of his 2017 title. His opening 7 holes on Sunday were unpredictable and inexplicable. Four bogeys and three birdies kept him in the chase, but in search of some sort of balance. Griffin made one birdie the rest of the way, gutted at the final hole with a left-short birdie putt to reach a playoff. Dougherty had 66 and Teaster, 68, to move up the Sunday leader board. Davis jumped all the way from 72nd to 14th in the season-long chase for a PGA Tour card.

Add the nerves on this 72nd hole chip with the @NashGolfOpen title on the line, and it equals #ShotOfTheDay.@camdavisgolf = clutch pic.twitter.com/U7Wa4Fx4L5