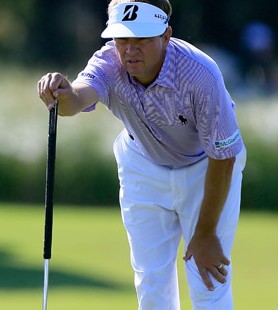 This week’s Children’s Miracle Network Hospitals Classic at Disney Resort offers a variety of newsworthy topics, for interests both short and long term.

Many players hovering around No. 125 on the money list are rightfully focused on securing their 2013 PGA Tour card. Others, whose place to play in 2013 is already assured, may be looking to break into the top-80 or top-70 on the money list, rankings earn golfers invitations to heralded PGA Tour events next season. Meanwhile, the conclusion of the 2012 PGA Tour season marks the end of the Fall Series as well.

Since 2007, and the emersion of the FedEx Cup, the Fall Series and Children’s Miracle Network event have closed out the PGA Tour’s season, shining a spotlight on the bubble players who must perform to continue playing at the game’s highest level. But when the Tour embarks upon its new schedule in 2013, the end of the FedExCup Series will mark the end of the PGA Tour’s season, meaning the Fall Series will become part of the Tour’s 2014 schedule.

That fact poses a challenge for Disney’s event, which has been played since 1971 and is one of the longest standing PGA Tour events. Children’s Miracle Network’s sponsorship concludes come Sunday, and the event’s exodus as the Tour’s finale could make finding a new sponsor a tall order. Nonetheless, the 128 players in the field this week will put everything forward to become the 2012 CMNH Classic victor.

Last year, then World No. 1 Luke Donald shot a final-round 64 to earn the come-from-behind victory and seal the PGA Tour money title over Webb Simpson. Six birdies to begin his back nine on the Magnolia Course fueled the low round as he claimed the two-stroke victory over third round co-leader Justin Leonard.

The players will once again take on the Palm and Magnolia Courses at Disney, with three rounds taking place on the 7,516 yard Magnolia track. The Palm may be the shorter course at 6,957, but it still provides challenges. Nine holes feature water while fairways are known for being tight and tree-lined. Accuracy on the course will prove key.

For the three other days, players will face even more water and a load of bunkers, but fairways are quite inviting off the tee. The Magnolia has water on 11 holes, while 97 bunkers are plotted around the course. Payne Stewart’s mark of 61 on the course in 1990 may stand the test of time as the course has grown over the years.

2012 Ryder Cup Captain Davis Love III is looking to close out the Fall Series on a perfect note having made each of the previous three cuts, and perhaps lock up another win at Disney. Love’s last win on Tour came at Disney in 2008. More notably, Love is currently No. 98 on the money list and is looking to stay inside the top 100 for the 27th straight season.

Tommy Gainey is no doubt still riding the high of his victory at the McGladrey Classic on St. Simons Island, Ga., but he is a golfer to keep an eye on this week. Gainey’s previous career-best finish was at this event, when he finished second to Love in 2008.

Meanwhile, Tour veteran Justin Leonard returns to Disney looking for a better end result than in 2011. Leonard’s tournament stalled in the final round as the 40-year-old only managed to shoot 1-under to fall two shots short of a playoff. Leonard’s five previous trips to Disney have been impressive as well, highlighted by three finishes of sixth place or better. Brendon de Jonge hopes to continue his hot streak in Orlando this week, riding three-straight top-five finishes. In those three events, de Jonge is a combined 54-under-par and Disney is another event which is birdie prone.

Finally, most year-end awards are practically foregone conclusions, but Jonas Blixt can try to throw a corkscrew into the equation if he takes his second title in his last three tournaments. Many consider John Huh the top contender for Rookie of the Year, as he was one of three rookies to win on Tour and made it the farthest of all rookies in the FedEx Cup Playoffs. Blixt is coming off a disappointing T-84 at the McGladrey Classic, but still has the momentum of his strong play in the first two Fall Series events.