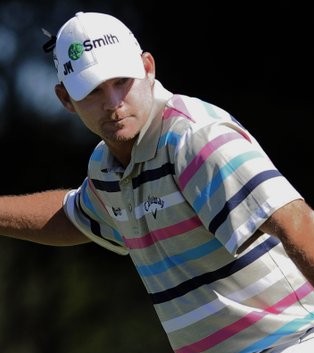 Gainey became the seventh PGA Tour winner of 2012 to finish Sunday atop the leaderboard after facing a deficit of six strokes or more to begin the final round. The former Big Break champion and now the first former contestant to win a PGA Tour event  putted his way past major champions and seasoned veterans. He needed only 24 putts on Sunday, leading the 37-year-old to finish the week second in putts per round at 28.50. Gainey’s 60, the only bogey-free round on Sunday, is the lowest round on the PGA Tour this season and beat the final round’s stroke average by almost nine shots.

Gainey started the final round seven strokes back at 6-under, but he got off to a fast start with birdies on three of his first five holes. The journeyman, who has logged tournaments on the Tarheel, NGA Hooters, Gateway and the Web.com tours, closed his front nine with another birdie to turn in 31 and break into double-figures at 10-under.

A birdie on the par-4 11th vaulted Gainey to 11-under and sparked a stretch of seven-straight 3s on his scorecard. His back-to-back birdies on Nos. 13 and 14 brought him into contention, while an eagle hole-out from a greenside bunker on the par-5 15th gave him a one-shot lead at 15-under. Gainey continued to pour the heat on as he rolled in a birdie on No. 16. Had Gainey been able to play his last two holes one-under, he would have become the sixth player to shoot 59 in a PGA Tour event. Gainey had a birdie opportunities on each of his last two holes — his best chance was a putt of less than 20 feet on No. 18 — but Gainey missed both birdie tries.

With Gainey posting a 16-under, 264 tournament total, his fate was left in the hands of proven tour veterans, as Jim Furyk (14-under) and Davis Love III (13-under) were just making the turn. However, Furyk and Love’s days were off to sluggish starts, each carding only one birdie on the front nine. Love opened the back side with a birdie to join Furyk at 14-under, but David Toms quickly became a player to watch down the stretch.

Toms, who started the day at 8-under, made the turn in 32 before starting a stretch of four birdies in five holes on the par-4 13th. The 13-time Tour winner found himself one shot back of Gainey on the 18th tee, but a wayward tee shot only allowed Toms to card a par on the 72nd hole, for a seven-under 63.

Meanwhile, Gainey, who finished around 2:40 p.m., wasted time by meeting with media, making a television appearance, signing autographs, watching his opponents down the stretch and checking his cell phone. It wasn’t until his final threat reached the 18th hole that he picked up a golf club again, just in case.

Love faced a tall order needing two birdies in the final three holes just to catch Gainey, but a pulled tee shot into the hazard on the 16th hole led to a double-bogey and denied Love his 21st career victory and his first since 2008, which came at Disney with Gainey settling for his then career-best second place finish.

Furyk remained as the only threat, posting gutsy par saves on the 10th and 17th holes, while also adding a fist-pump-inducing birdie on the 15th. While Furyk has seen leads disappear in the final holes of tournaments this season, he was faced with a different challenge in this situation. Needing a birdie on the 72nd hole, Furyk placed his drive perfectly, only to leak an iron shot to the right and miss the green. An unsuccessful chip-in attempt left Gainey standing as the victor at 16-under. Another missed putt from Furyk then dropped him into solo third.

“These guys are good,” Gainey said after the round. “I am just glad to be out here with them.”

With his win, Gainey is assured his place on the PGA Tour through 2014. Gainey was basically assured his card for 2013, starting the week at 106th on the money list, but he jumped 50 spots with the victory.

A host of other players made moves from their weekend play, allowing perhaps a little more comfort before the final event of 2012. Most notably, David Mathis improved six spots to 116th and Kevin Chappell went from the outside the top 125 to inside the top 125 (126th to 123rd). Others, such as D.J. Trahan (up 21 spots to 130) and Charlie Beljan (up 11 spots to 139) will need to perform at Disney to secure their spot for 2013, as only the top 125 players on the money list are guaranteed a Tour card for 2013.

Photos from the Isleworth Collegiate Invitational