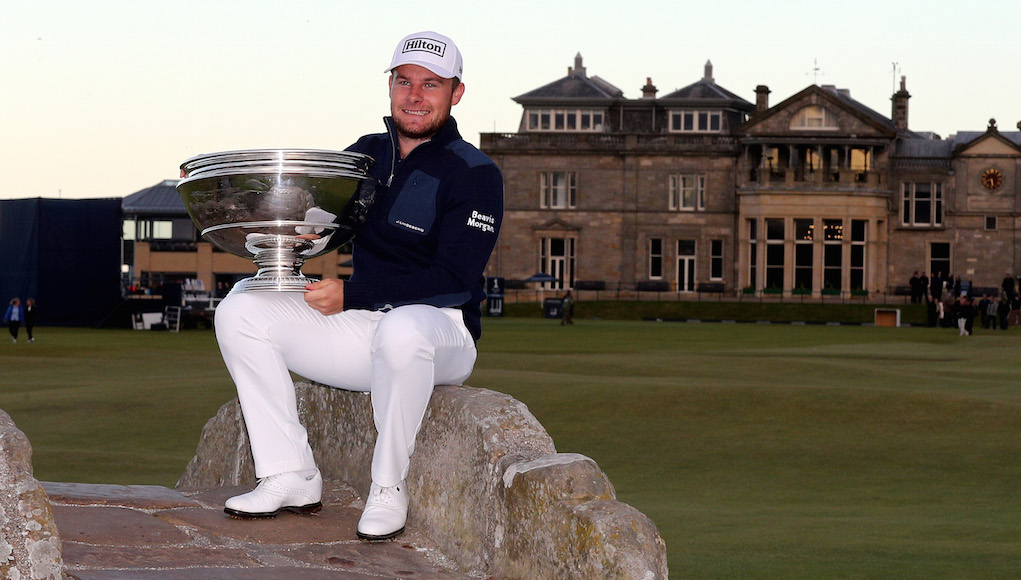 As the golf world holds its breath and transitions from the passing of one great to the anticipated return to competition of another, there are some tour potatoes waiting to be mashed.

The LPGA and European tours competed in Asia, while the Champions Tour teed it up in California. Oh, and another European Tour event took place at the home of golf.

Grab a spoon and dig into this week’s Tour Mash.

Hatton breaks through for 1st win at Dunhill Links Championship

If you blink, you’ll miss the next great English golfer, and his name isn’t Willett, Sullivan or Rose, Wood or Fitzpatrick (wow, that’s quite a Murderors’ Row of names!).

Tyrrell Hatton quietly has had a stellar season in 2016. On Sunday, he capped it with a maiden victory at the home of golf. Hatton never wavered in his voyage across the links of Carnoustie, Kingsbarns and the Old Course, even as golfers named Fisher, Lagergren, Sterne and Noren attempted to chase him down.

Hatton made his mark on the majors in 2016, finishing T5 at the Open Championship and T10 at the PGA Championship. In Scotland, he surged into the lead with a 10-birdie 62 on Saturday, then posted seven birdies on Day 4 to assume a commanding lead over the field. A meaningless bogey on the Road Hole, his first since Day 2, followed by a par at Home, clinched a four-stroke victory over Ross Fisher and Richard Sterne.

Jang missed out on Olympics, but triumphed in Taiwan

#LPGAWiinnerSelfie with Ha Na Jang at the #FubonLPGA. This is Jang’s 3rd winner selfie of the season! pic.twitter.com/Eqv0rzoUFt

Ha Na Jang of Korea stumbled just three times this week for bogey. Fortunately for her, she posted 20 birdies over the four rounds of the Taiwan Championship, including 10 in a 62 on Saturday. Despite those fireworks, Jang had to hang on to escape Taipei with a one-stroke victory over China’s fast-charging Shanshan Feng. Feng nearly holed a bunker blast at the final green to tie, but Jang was able to two-putt the last to win.

Jang made birdie on three of her first six holes on Sunday, then slipped with bogey on two of the next three. She parred out for 71 on the day and 17-under par for the week. Simultaneously, Feng rebounded from her only Sunday bogey with birdies on five of her closing 11 holes to just miss a playoff. In a distant tie for the third spot at 10-under were Brooke Henderson of Canada and Hyo Joo Kim of Korea.

Jay Haas seeking his first win since 2014 at the @ToshibaClassic.

Make it 18 wins on the Champions Tour for Jay Haas, twice as many tournaments as he won on the PGA Tour. Haas began the day well in front, but limped home with a 70 to open the door. Bart Bryant had a chance to win in regulation, but made an unbelievable bogey on the 510-yard, par-5 closing hole to hand opportunity back to Haas.

In the playoff, Bryant made a mess of things from the get-go. He tugged his tee ball left of the fairway and was forced to manufacture a shot over the trees. His hybrid sailed right of the green, and he was unable to hold the putting surface with his pitch. Haas, meanwhile, split the fairway with his drive and sailed a fairway metal off the green to the right. His pitch motored to tap-in distance, forcing Bryant to drop his birdie chip or shake hands. When the wee pitch lipped out, Haas became the 2nd-oldest winner in Champions Tour history at 62.

Billy Andrade also made a run on Sunday at Newport Beach Country Club before finishing T3 with Larry Mize at 14-under, two shots out of the lead.

A glance at the leaderboard after Sunday’s final round suggested that Brandt Snedeker was matched against a team from Australia and New Zealand. Fourteen of the top-17 finishers hail from one or the other Antipodean nation. At day’s end, it was the Ryder Cup stalwart from the USA who came out on top, finishing 9 strokes clear of the runner-up.

Snedeker trailed Matthew Giles by one at the start of Round 3, but ended the day four strokes clear and in the lead. On Sunday, he erased any suggestion of a collapse with a rock-solid 68, eclipsed only by Max McCardle’s 66 for low round of the day.

Finishing second at 7-under was Michael Hendry, with a foursome of golfers one more stroke back at 6-under.

Woods, Mickelson paired together in Napa: How will Tiger do?