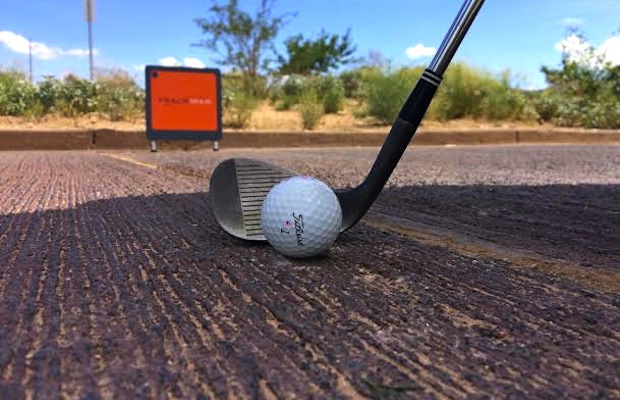 Phil Mickelson hitting wedges out of the hospitality area at the Barclays two days in a row showed the true beauty of golf – play it as it lies! It also showed us as golfers that we need to be prepared to play shots from all sorts of lies.

Although very few of us will have to hit out of a hospitality area on the golf course, there is a very real possibility you may have to hit a ball off the cart path. I understand if you’re out having fun and move the ball off the path to the closest available grass, but in competition the rules prohibit moving the ball closer to the hole forcing you to either play the shot or possibly drop the ball into and even worse position, similar to what happened to Mickelson at The Barclays.

With that in mind, I thought it would be fun to look at what happens when you try to hit the ball off the cart path, and with the help of Trackman, put together a couple of thoughts to help you execute the shot successfully. From the lie in the image above, I hit close to 30 shots. The first two groups were 5 to 7 shots each, one group from the cart path, one group from the grass just in front of the cart path. The only thing I tried to control was the speed of the swing. The data sets below represent the averages of each group all of which were hit with a 60-degree wedge.

A couple things stick out to me from the data:

As you address the ball, you’ll need to lean the shaft forward to take some of the bounce out of the 60-degree wedge I’ve got here. In the image below you can see as you set the club down, the bounce brings the leading edge off the ground quite a bit, making if very easy to skip the sole of the wedge off the cart path and blade the ball. 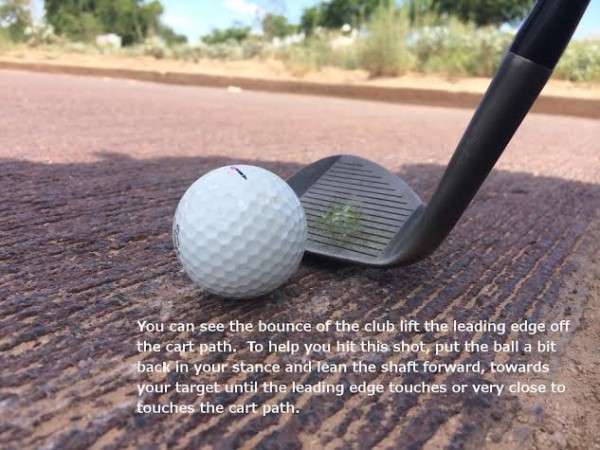 Leaning the shaft forward brings the leading edge towards the cart path, making it less likely for you to engage the bounce. 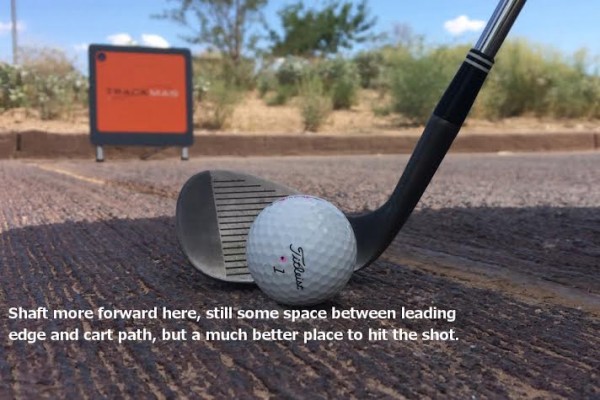 As you put the ball a little more back in your stance with the shaft leaning forward, you’ll be more prepared to hit the shot successfully.

Once you’re set up, try to hit the shot using as little hands as possible. If you could imagine holding the setup position and hitting the shot by turning your shoulders and nothing else, you’ll have a much better opportunity to hit it solid. When the hands are even a little bit active, hitting the shot solid will be increasingly difficult. You can also experiment with something like a 56- or 52-degree wedge, which will generally have less bounce and may make it easier for you to catch the ball cleanly.

As for how this shot will affect your golf club? Here’s a look at my wedge after close to 30 shots of the cart path (hit a couple extra for fun after I had the data I needed). 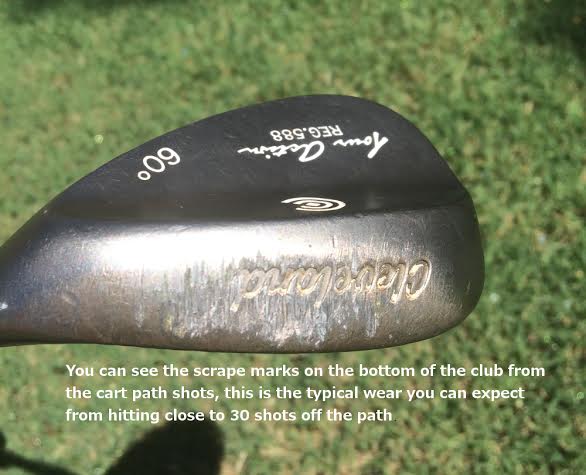 The wedge is obviously going to take a little beating, but the overall damage will be minimal, especially hitting just one shot. In terms of loft and lie, I don’t think you’re going to see any difference after the shot.

As a player, I used to fit these kinds of shots into the last few minutes of my practice sessions. I know you don’t want to destroy the bottom of your wedges, but if you’ve got an old wedge you can use, give it a shot. I always got some funny looks from people practicing these shots, but you never know when you’re going to need it. And you all know how much difference saving one shot can make.

Who is the greatest driver of the golf ball, ever?

Between clubs? Choking up is always the best strategy

Kelley: How to easily find your ideal impact position 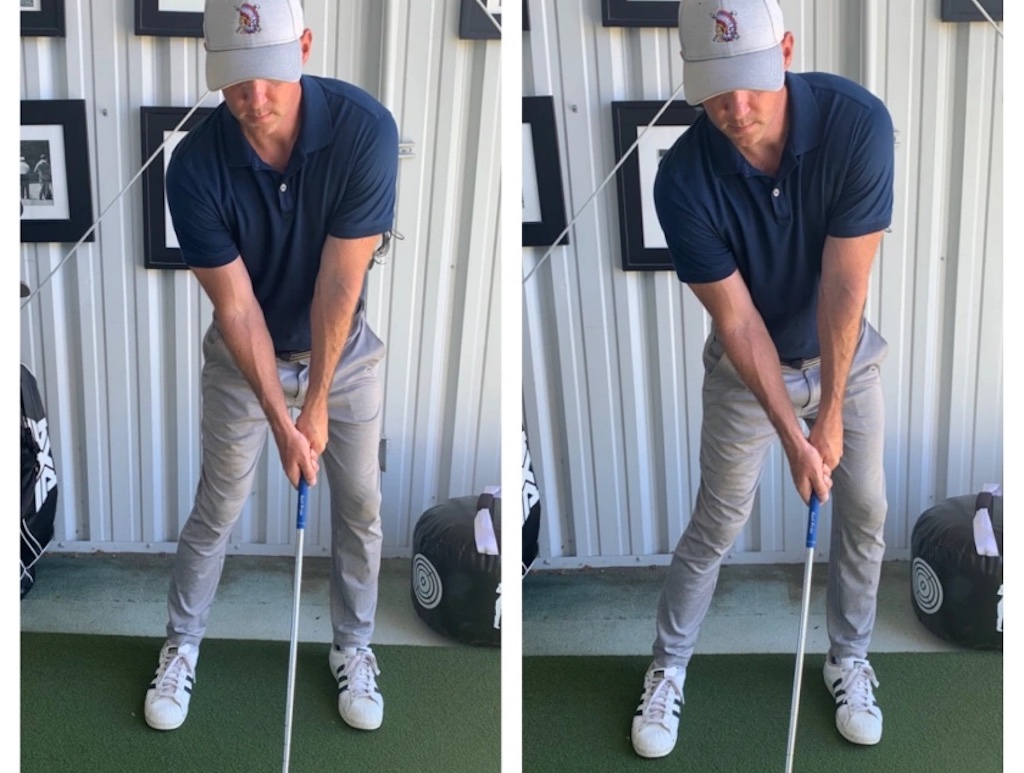 If you look at any sport, the greats seem to do more with less. Whether it be a swimmer gliding through the water or a quarterback throwing a pass, they make it look it easy and effortless.

In golf, there are a variety of distinct swing patterns to get into a dynamic impact position. I believe in efficiency to find that impact position for effortless power and center contact. Efficiency is defined as “the ability to produce something with a minimum amount of effort.” This can easily apply to the golf swing. 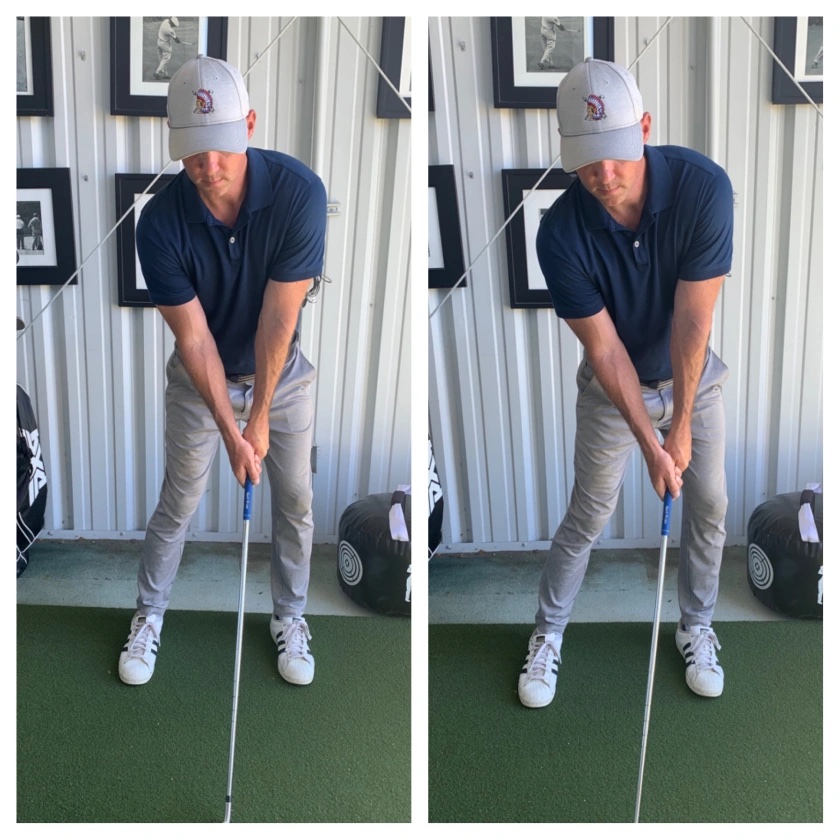 It all starts with the address position. The closer we can set up to an impact position, the less we have to do to get back there. Think of it like throwing a ball. If your body is already in a throwing position, you can simply make the throw without repositioning your body for accuracy. This throwing motion is also similar to an efficient direction of turn in the golf swing.

Once you set up to the ball with your impact angles, if you retain your angles in the backswing, the downswing is just a more leveraged or dynamic version of your backswing. If you can take the club back correctly, the takeaway at hip-high level will mirror that position in the downswing (the desired pre-impact position). In the picture below, the body has become slightly more dynamic in the downswing due to speed, but the body levels have not changed from the takeaway position. 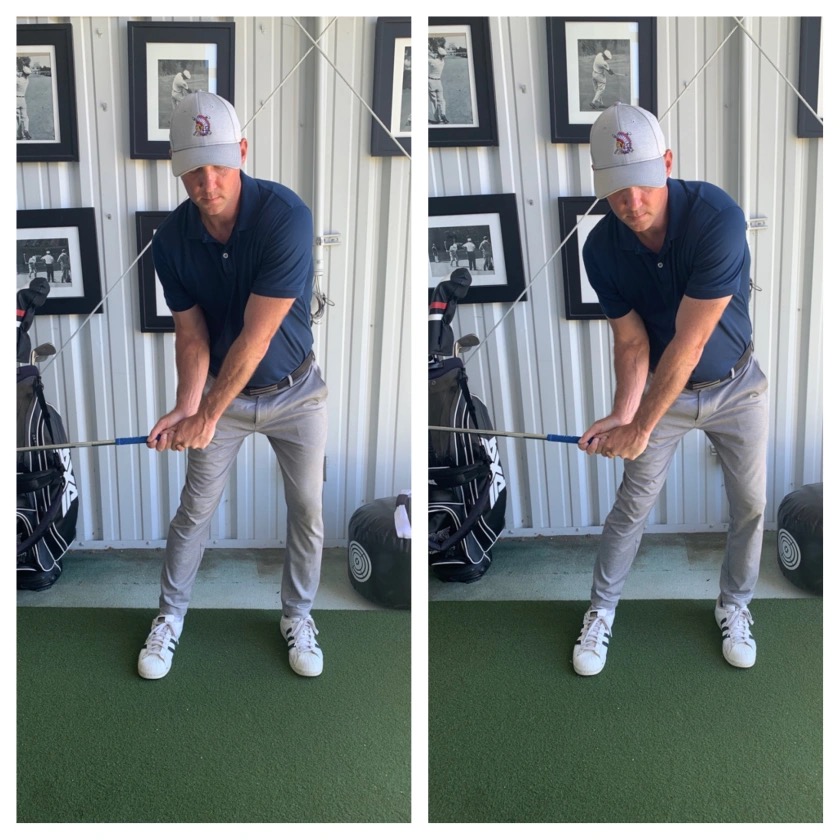 This stays true for halfway back in the backswing and halfway down in the downswing. Note how the body has never had to reposition or “recover” to find impact. 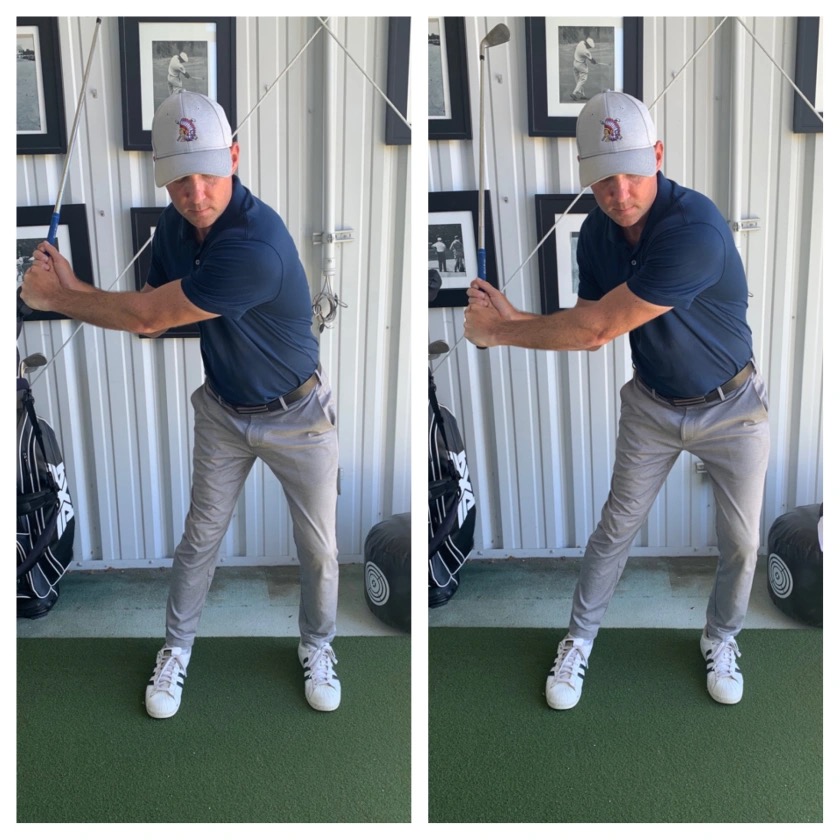 At the top of the swing, you will notice how the body has coiled around its original spine angle. There was no left-side bend or “titling” of the body. All the original address position angles were retained. From this position, the arms can simply return back down with speed, pulling the body through. 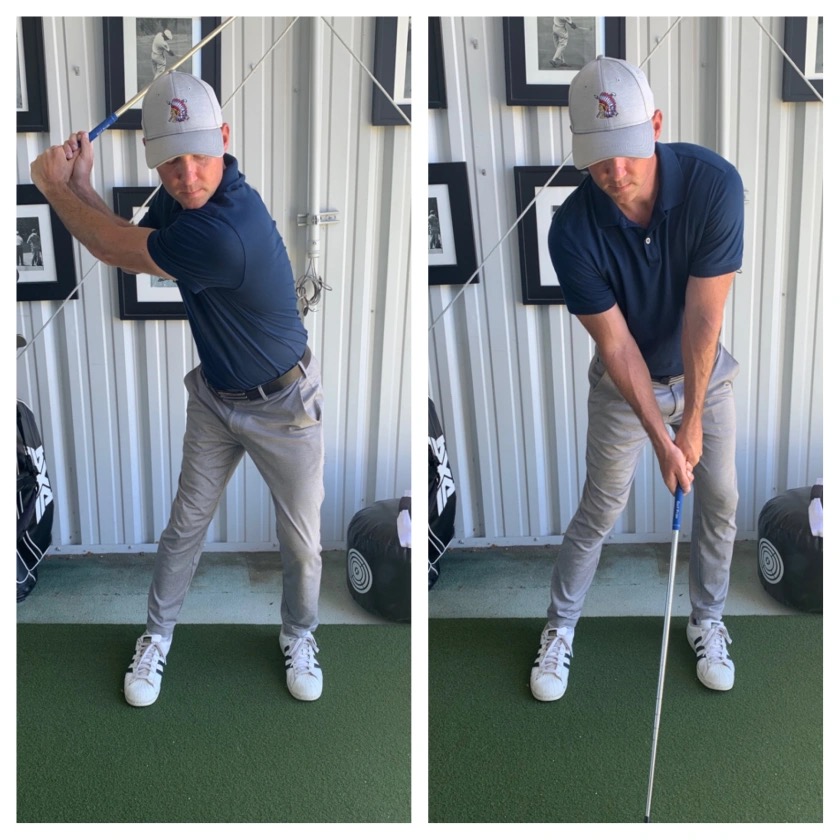 The key to an efficient swing lies in the setup. Luckily for players working on their swing, this is the easiest part to work on and control. If you can learn to start in an efficient position, all you need to do is hold the angles you started with. This is a simple and effective way to swing the golf club. 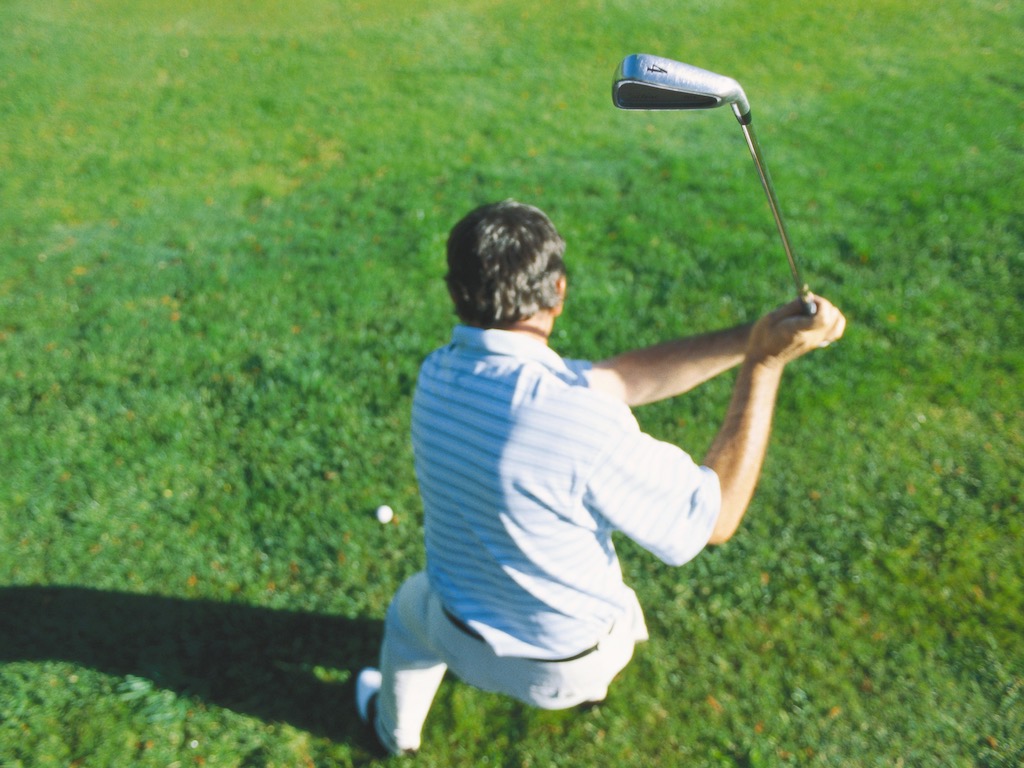 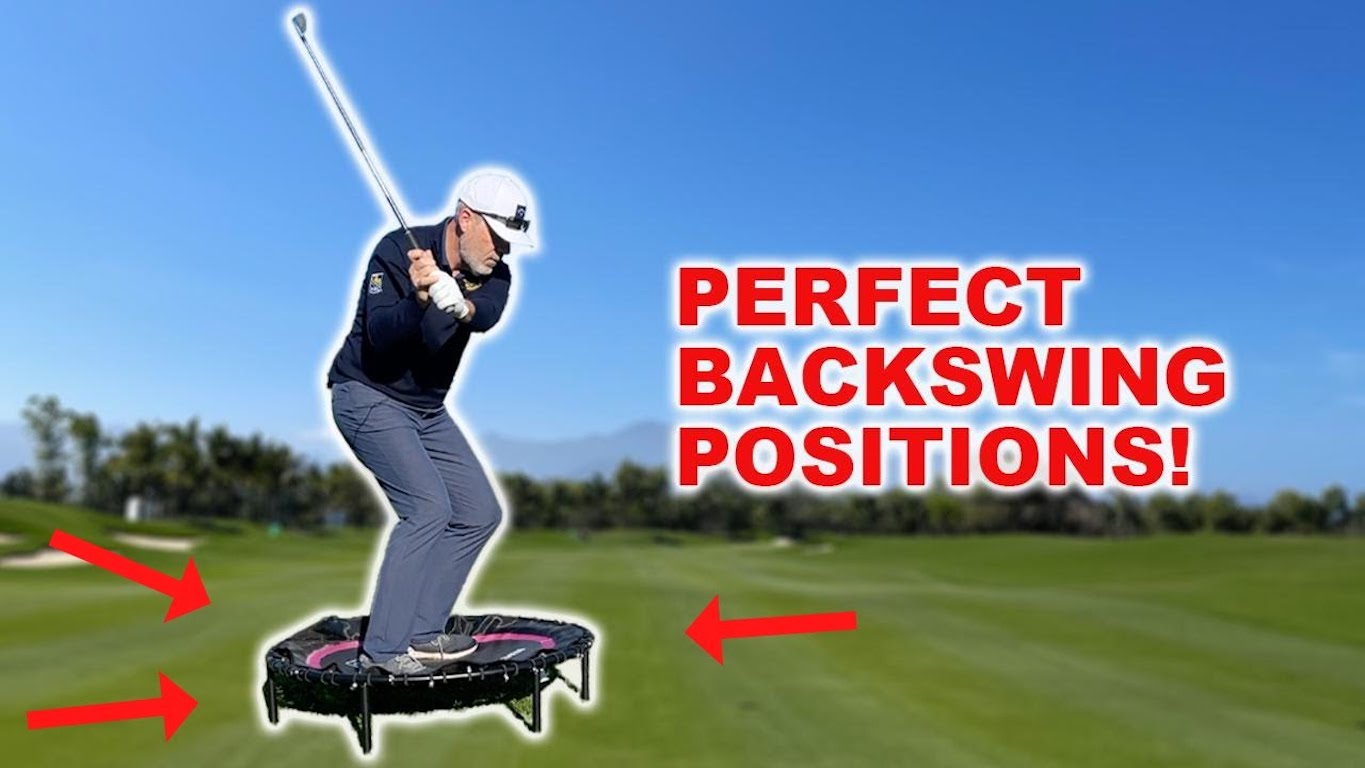