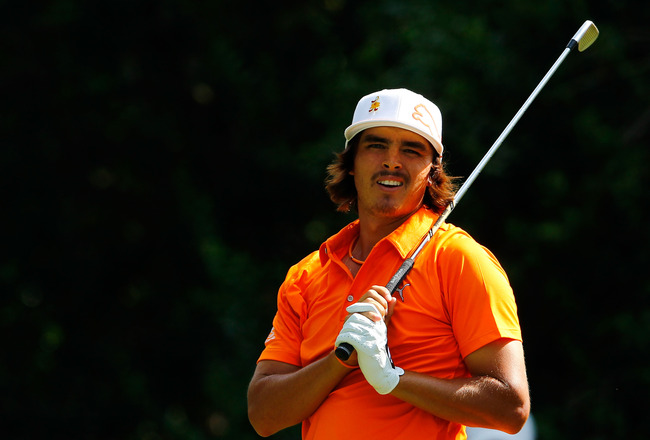 Since he turned pro in 2009, the golf world has been impatiently waiting for one of its young stars to capture his first PGA Tour win. On Sunday at the Wells Fargo Championship in Charlotte, golf fans all over the world rejoiced as 23-year-old Rickie Fowler captured his first Tour victory in electrifying fashion with a birdie on the most difficult hole, the par 4 18th, in a three-way playoff over the No. 1 ranked player in the world – Rory McIlroy – and D.A. Points. On the first playoff hole, Fowler hit a gap wedge from 133 yards, a full shot that left him four feet for the win. After Points and McIlroy missed birdie attempts, Fowler made the putt. Just twelve days before, he switched to putting with a left hand-low grip, a method he had not used since high school. The change worked.

Fowler’s first PGA Tour win comes in his 67th start as a professional, his other professional win coming at the Korean Open in 2011. His rounds of 66-72-67-69 left him at 14-under in regulation and the final birdie finished the deal. Among his six birdies in the final round, a birdie on the par-5 15th gave him a key lead. Despite a bogey on No. 16, Points and McIlroy behind him bogeyed one of the closing two holes in succession, giving him a playoff opportunity. Fowler’s previous best finishes on the PGA Tour were runner-up finishes at the 2010 Waste Management Phoenix Open and the 2010 Memorial Tournament.

“I would’ve liked (the win) to come sooner, but I knew it’s not easy to win out here on Tour,” he said. Fowler added, “Nice to finally have the first one out of the way.”

Fowler’s mother Lynne and girlfriend were on site for the win. Fowler, a captain’s pick in the 2010 Ryder Cup, improves to seventh on this year’s Ryder Cup points list with the win. One of Fowler’s more famous moments in golf was winning a half-point in those matches by making birdies on his last four holes, winning each one. With his win, only one player has won the Wells Fargo Championship at Quail Hollow Golf Club who did not represent his country on a Presidents or Ryder Cup team. Joey Sindelar remains that lone ranger, a champion in 2004 over Aaron Oberholser.

Fowler’s popularity is already rivaling some of the most polarizing figures in the game thanks to his style and personality. This was evidenced by his large support of congratulatory figures on social media such as Twitter on Sunday night. Fowler’s line of PUMA merchandise is already a regular sight on fans at PGA TOUR events as well. Fowler sported an orange outfit as tribute to his Oklahoma State University Cowboys, as he usually does on Sunday, including a white belt, flat-billed white hat, and white shoes. Most notably, he also made sure to keep a “Leuk the duck” pin in support of Leukemia-stricken PGA TOUR member Jarrod Lyle on the forefront of his cap throughout the day. Originally from outside San Diego in Murrieta, Calif., Fowler returns close to his current home of Jupiter, Fla., this week to prepare for The Players Championship at TPC Sawgrass in Ponte Vedra Beach, Fla.