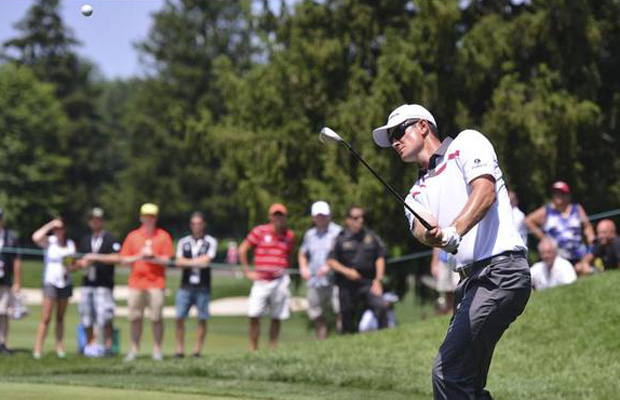 Justin Rose survived the Sunday test of Congressional Country Club at the Quicken Loans National, as he carded one of just six under-par rounds on the day and defeated Shawn Stefani with a par on the first playoff hole. The title is Rose’s sixth career PGA Tour win, and he joins tournament host Tiger Woods as the only other two-time winner of the event, having won in 2010 at Aronimink Golf Club.

While Woods made his return to Tour competition this week, his game may have been spared even more criticism thanks to his 10th career missed cut as a professional.

The lead entering the weekend at Congressional was 6-under, but the course showed its teeth on the weekend despite benign weather conditions.

“I think Congressional got its reputation back this week after the U.S. Open here,” Rose said after the win. “I really enjoy this type of golf and this type of test. I think it tested us all this week.”

Stefani’s tee ball sailed well left on No. 18 as he led off the bonus golf, while Rose found the fairway. After Stefani received line-of-sight relief for the grandstands, he attempted a low runner to find the back portion of the green. But it was left all the way and found the water hazard, nearly mimicking Rose’s second shot at No. 18 in regulation. Rose calmly found the middle of the green and two-putted for the victory.

Meanwhile, 54-hole leader Patrick Reed will hear plenty about how a top-five player would have closed out entering Sunday with a two-shot advantage, after the 23-year-old carded a final-round 77 and finished T-11. If he has anything to lean on, it’s the fact that his playing partner in the final pairing, Seung-Yul Noh, also blew up with a final-round 79 and plummeted to a T-30 finish.

Ironically, both Stefani and Rose battled back from opening-round 74s to find themselves tied atop the leaderboard through 72 holes.

Rose drained clutch putts on his final two holes of regulation to post the 4-under 280. On No. 17, he made a testing par putt, before making a stellar up-and-down for bogey on No. 18 after his second shot from the left trees found the water hazard. Another round-saving shot from Rose came on the par-4 No. 14. An iron off the tee for safety didn’t work to his advantage, finding the left rough and leaving more than 220 yards in to the green. But a well-played, running shot found the green and led to par.

Stefani, who matched Rose by navigating Congressional with a Sunday 70, posted four birdies on the day to three bogies. He made a side-door putt for birdie on the par-5 No. 16, but bogeyed No. 17 to return to 4-under. He had a look at birdie on No. 18, but the putt slid past the edge.

The solo second is Stefani’s best finish on Tour, and also earns him a spot in the British Open. Charley Hoffman (T-3), Ben Martin (T-3), and Brendan Steele (T-5) also each earned spots in the season’s next major based upon their finishes this week.

Andres Romero posted the day’s best round, a 3-under 68, and also finished T-5, but Steele’s World Ranking earned him the British Open spot as the top-4 finishers in this week’s event not yet qualified for the major punched their ticket across the pond. Next week’s Greenbrier Classic will also have the same opportunity for qualifiers.

Billy Hurley III recorded his second top-10 finish at the Quicken Loans National with a T-8 at 1-under. The Naval Academy grad finished fourth at the event in 2012.

All six of Rose’s Tour victories have come since 2010, with only Woods (8) having won more. Rose has now won a Tour event in five consecutive seasons, the third-longest streak behind Phil Mickelson (11) and Dustin Johnson (7).

Woods’ missed cut was a step in the right direction