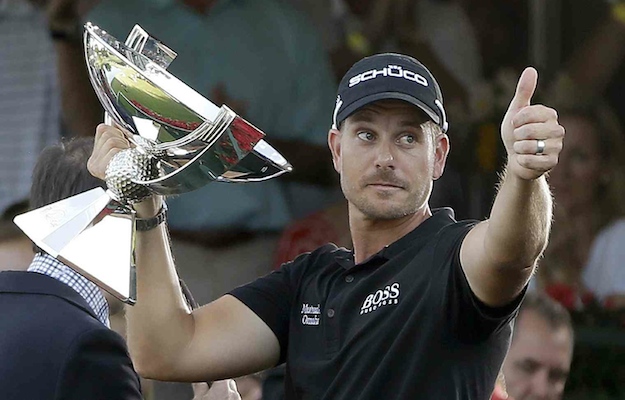 At the beginning of the 2012, the 230th spot in the Official World Golf Ranking belonged to a washed-up former top player in the world who had nearly completely lost his game after a few good years in the late-2000s, highlighted by a win of The Players Championship in 2009.

That guy was Henrik Stenson, the draw-hitting Swede known primarily for the sunglasses he nearly always wore on the golf course. In the years of his decline, the draw turned to a hook and his decent putting abilities turned against him, dragging his confidence into the gutter.

Now, those days seem to belong to another player altogether, as Stenson capped a torrid reemergence as one of professional golf’s major figures last weekend in the United Arab Emirates, adding the European Tour’s Race To Dubai title to the FedEx Cup he snatched in September. A final-round 64, punctuated by an eagle on No. 18, gave Stenson a six-shot victory in the tournament, a Race to Dubai margin of victory of nearly a million points over Ian Poulter and the No. 3 spot on the Official World Golf Ranking.

Stenson became the second player to top major lists for both the PGA and European Tours since Luke Donald won the PGA and European Tours’ money lists in 2011. Stateside, he entered the FedEx Cup Playoffs in ninth place on the strength of six regular-season top-10s. He seemed to play his best golf in the biggest tournaments, tying for 18th at the Masters, for 21st at the U.S. Open and finishing second at the Open Championship and third at the PGA Championship. He broke through into the winner’s circle in the second FedEx Playoff event, the Deutsche Bank Championship, and dominated the field at the Tour Championship, earning the FedEx Cup trophy and a $10 million bonus for his exploits.

Whereas most great players separate themselves by making a few more putts than their peers, Stenson made his hay tee-to-green in 2013. He has completely turned his ball-striking around in two years: in 2011, he hit a scant 59.17 percent of his greens in regulation, leaving him 187th on Tour in that statistic. In 2013, he hit a shade under 72 percent, the best mark on Tour. In more concrete terms, that is 13 greens in regulation per round, compared to a 2011 total of 10 or 11. Those two or three extra birdie putts per round add up massively over the course of a year. And they are almost always going to be from closer to the hole, on average—after all, Stenson also raised his driving accuracy numbers from nearly 56 percent (163rd on Tour) in 2011 to just over 70 percent (s) in 2013.

Statistics are all well and good, but anecdotes from fellow tour players and other golf writers also indicates that 2013 saw a more serene, even-keeled Stenson, for the most part—his well-publicized mangling of a locker at Conway Farms Golf Club during the FedEx Cup Playoffs’ BMW Championship seeming to be a rare relapse. This is no doubt an important indicator of what the golf world ought to expect from Stenson as an encore to his terrific 2013 campaign. After his 2009 peak, the responsibility and self-generated expectations of beginning an earnest pursuit of major championships may have gotten to Stenson, who would love to become the first Swede to win one of professional men’s golf’s biggest titles. If his newfound more zen temperament is here to stay, look for him to compete at Augusta in April.