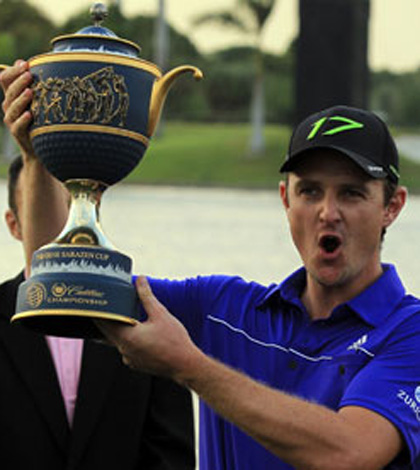 Just as we have come to expect from World Golf Championships, the field at this week’s WGC-Cadillac Championship features the best of the best, as 48 of the world’s top 50 players will face the TPC Blue Monster in a 65-man field in Miami.

Rory’s tooth, Tiger’s game, Phil’s return after a couple weeks off and a multitude of international players in the field grab immediate headlines, but it is not to be overlooked that the famed tournament has signed a lengthy extension, good through the 2023 season. Golf has a rich tradition at Doral, dating back to 1962, and looks to continue after The Trump Hotel Collection’s purchase of the resort last June.

The Tour’s elite, including defending champion Justin Rose, will once again have to navigate the 7,334-yard, par-72 track. The Blue Monster’s closing holes have always been a challenging finish, especially with No. 18 waiting. Last year, No. 18 ranked as the second-toughest hole on Tour.

Fans looking to follow quality groups over the first two days will have plenty of options to choose from, headlined by the 1-2-3 lineup of Rory McIlroy, Tiger Woods and Luke Donald.

McIlroy is looking for his first complete tournament of the season after missing a cut in Dubai, getting ousted from the WGC-Accenture Match Play Championship’s first round and departing last week’s Honda Classic through 26.5 holes due to a toothache. Grumblings of his equipment switch to Nike, the state of his relationship and the state of his game overall have all come about due to his recent lackluster performances.

Woods, who won the event three-straight years all on different courses (2005-07), is looking for his second early season win. Last week, Woods struggled to get anything going, posting three rounds of even-par 70 and a final-round 74. Last year, Woods failed to complete the tournament, finishing outside the top-10 for the first time in the event’s history.

Meanwhile, world No. 3 will be making his third start of the year. Donald finished T16 at the Northern Trust Open, where he closed with a final-round 75, and T17 at the WGC-Accenture Match Play Championship.

Bubba Watson, Phil Mickelson and Steve Stricker form another marquee group. Watson already has a pair of top-10s in four appearances this season, Mickelson has a win in Scottsdale, while Stricker has been strong in his two lone appearances –- a second at the Tournament of Champions and a semifinal run at the WGC-Accenture Match Play Championship.

Additonally, Webb Simpson, Sergio Garcia and Graeme McDowell are as quality a trio as any other. Simpson has had a busy season already and has posted top -6 finishes each of his last two times out. McDowell has recorded a pair of top-10s in his last two starts as well. Garcia has earned top-20 finishes in each of his first two Tour starts this year.

Last year, Rose posted a final-round 70 to sneak past third-round leader Bubba Watson, who carded a two-over 74. Rory McIlroy shot 67 on Sunday to make a run, but came up two shots short.

Last week’s 1-2 finishers Michael Thompson and Geoff Ogilvy are looking for strong back-to-back weeks after gaining entry to the event. Both jumped inside the top-50 in the world rankings after last week’s performances. Rookie Russell Henley also jumped into the mix as a late addition, qualifying due to his current place in the FedEx Cup ranks third.

Inside the ropes: Photos from Doral