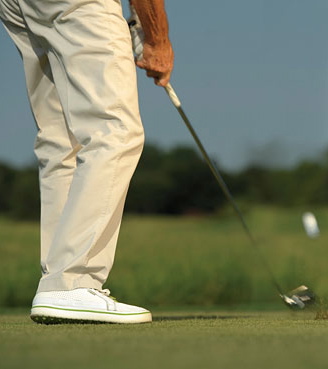 Is your footwork keeping you from better scores? Golfers spend a lot of time working on swing plane, but footwork is one of the most critical parts of the swing. It starts the downswing, so if it’s done improperly can lead to numerous swing flaws.

Improper footwork can cause loss of spine angle, reverse weight shifts, hooks and slices just to name a few. One of the problems with golf is we don’t play the game facing our target and our minds function far better dealing with anything facing its target — it’s the way the human brain developed. So what do the best players in the world do that a large amount of golfers don’t do with their feet?

Stability is important when swing at a stationary ball, where as in baseball we see the ball and react. This allows movement or a dynamic use of the feet. One of the most common mistakes made with footwork is not keeping the right foot (for right-handed golfers) planted in the ground during the downswing. This happens for a few different reasons, the first is due to the fact we are trying to hit something with a considerable amount of force. The second which I had never thought about, is our toes and how our brains work when trying to do something athletic. You see our toes are used like claws, this fact was pointed out to me by Eric Johnson, director of golf instruction at Oakmont Country Club and Top-100 Teacher.

Johnson believes improper footwork leads to numerous misses in the golf swing. No matter how good a player you are, if you are using your feet incorrectly, it is hurting your golf game. Any number of swing flaws can be attributed to poor footwork. How do you know if your footwork is poor? The stats you generate playing can give you a clue, if you evenly miss right or left, fat and thin, it may be your footwork causing these inconsistencies.

I little while back, I booked a lesson with Johnson to work on my swing flaw, a rise up during the downswing, which is a problem I’ve had for most of my golfing life. Johnson went into detail about the causes and the answer was a surprise to me. It was my toes!

How do your toes — such a small appendages — effect your golf swing? Johnson went in to detail, saying:

“In an effort to generate speed, clear hips and gain traction we grasp at the ground with our toes of the right foot. This can cause one of the death moves in the golf swing. As the toes grasp for the ground like claws, commonly the right heel rises causing the right knee to move forward, perpendicular to your target. In this position commonly the golfer will rise up because the right knee is now partially blocking the path of the club returning to the ball. From this position we can hit the ball everywhere!”

Below are two examples of footwork. The first pictured is improper footwork with the right foot, knee and spine rising up. As Eric explained, from this position the golfer has to reach for the ball. Reaching for the ball as illustrated can cause every mishit, fat, thin, hook or slice. By adding this extra hinge, the golfer is making a more complicated swing that requires even more timing. Timing under pressure is not a good thing. 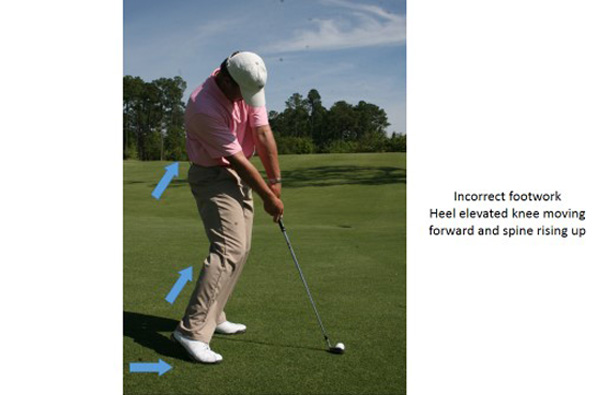 The proper footwork is instead a roll to the instep of the right foot, performed by arguably the best ball striker that has played the game, Tiger Woods. The difference in this picture compared to the one above is night and day. With this move the entire force of the swing is directed into the ball, with no wasted movement up and away from the ball.  This is also a much simpler move with one less hinge, making ball contact and direction far more consistent. 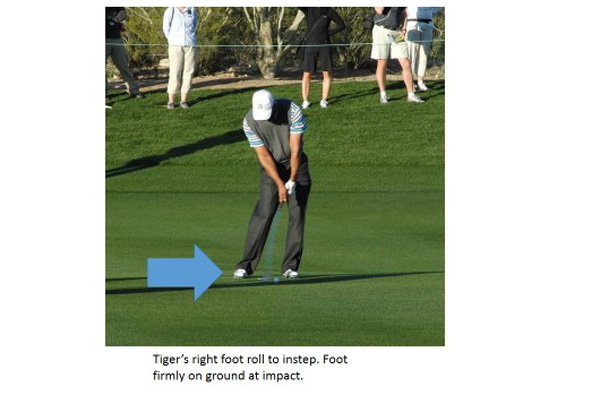 “This swing has the feeling of far less going on in it, the golfer will feel a firm left side,” Johnson said.

The drill I work on to do this, which might help you, is the “right toes in the air” drill, which I had never done before meeting and working with Eric Johnson.

In Part 1 of this drill, take a stance that is as wide as your shoulders. Then raise the toes of your right foot into the air about 2 or 3 inches. Make swings at about 40 percent to start and keep the toes elevated during the swing.

This might feel very strange, as you will be trying to shift to your left leg down and through the ball. But this drill will not allow you to rise up if done properly.

Once you have mastered this part of the drill move onto Part 2, which is much simpler. This time, take the same stance and elevate just the big toe of the right foot. Start at 40 percent and build to full speed swings. This drill will give a feeling of the swing being very constricted, but what it teaches is hitting into a firm left side instead of a spun out and pulled up position.

If your swing looks like the first photo above, try this drill and see if it helps. If you can master this move, you will be surprised at the ball pattern that will appear on the face of your irons. There will be less moving parts in the swing and that is never a bad thing! 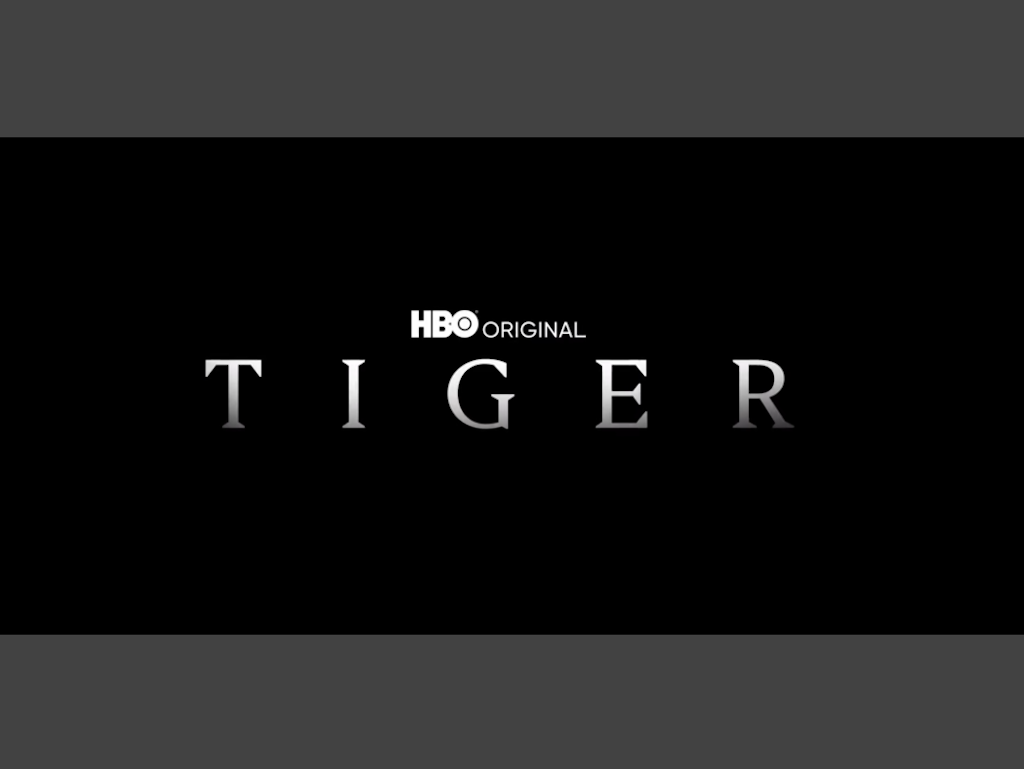 On this episode of TGD, Johnny goes in hard on the HBO documentary Tiger. 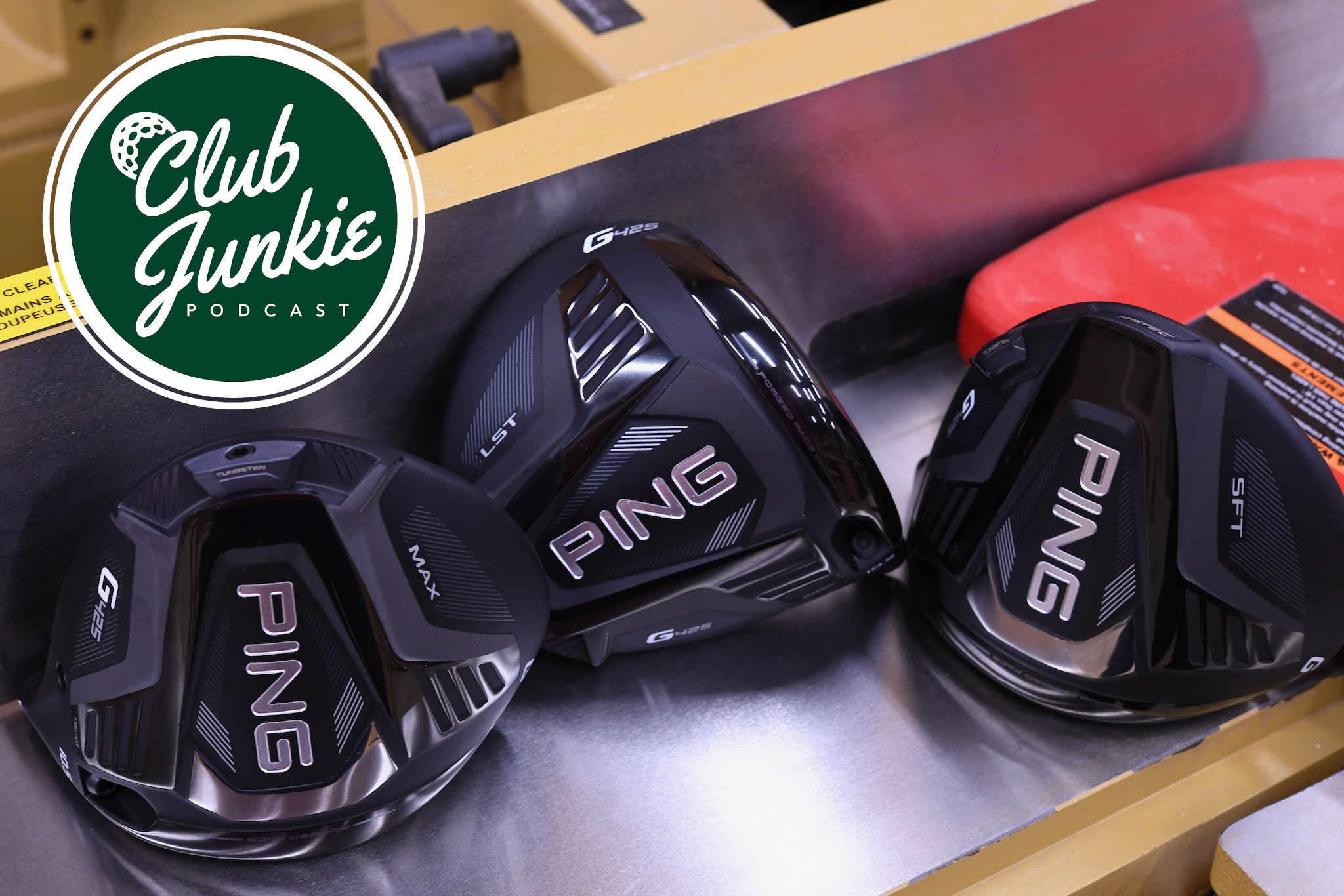 Ping’s new G425 line of clubs was just released this week and I have had them out on the range! Comparing the G425 LST driver to the Max and what one worked best for me. The rest of the lineup is just really easy to hit and very forgiving. Ping has crafted a great lineup of clubs that are easy to hit and will make the game more enjoyable for those who play them!

The Wedge Guy: Is there a single “secret” to a better short game? 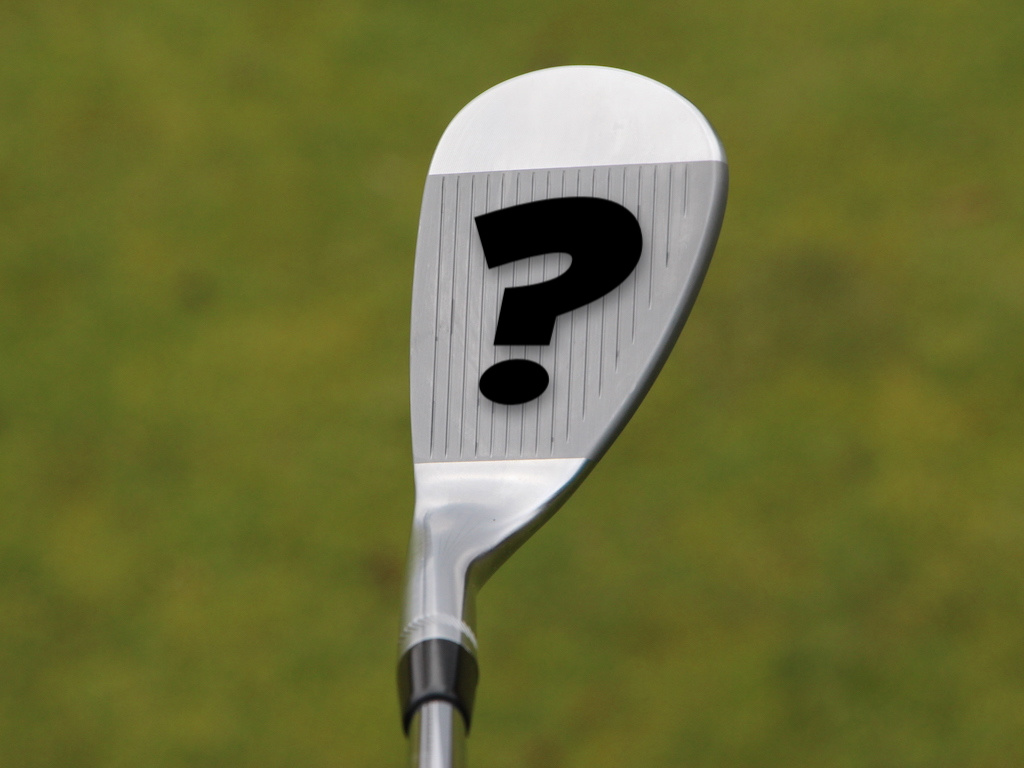 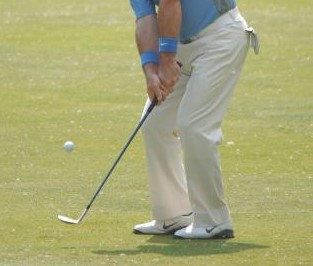