Morning 9: Svensson breaks through I Pelley on OWGR | Player calls for LIV truce 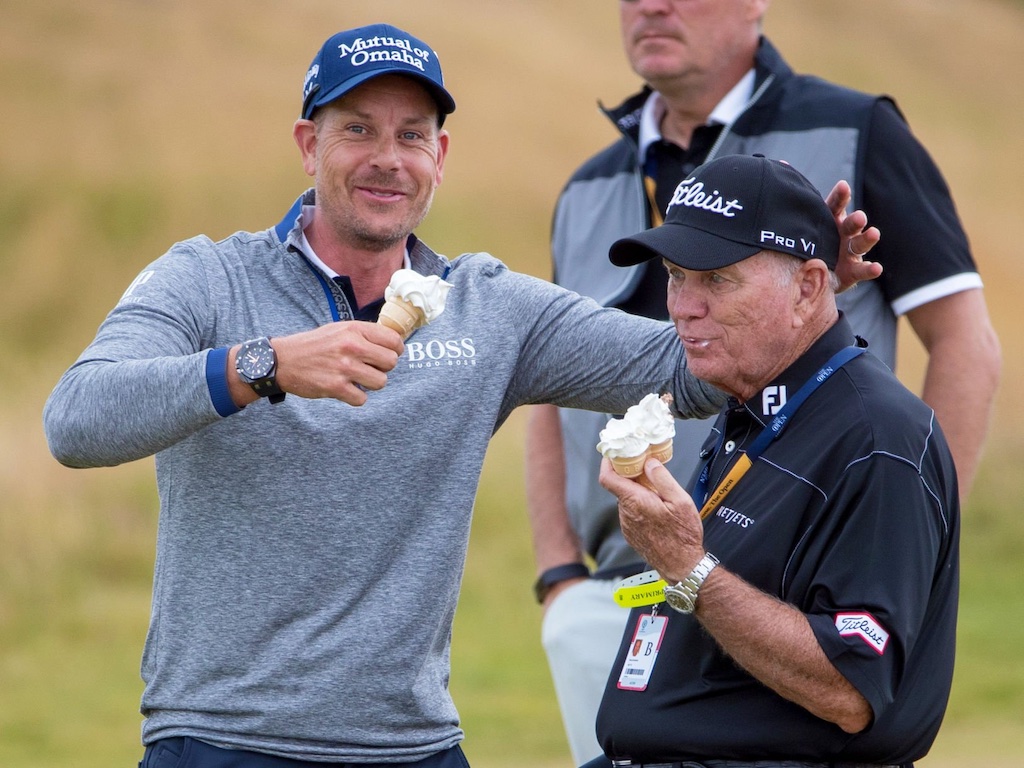 Butch and Henrik enjoyed a little treat before the start of the 2018 Open Championship at Carnoustie. Butch looked to be wearing a Dark Rhodium Rolex Yacht-Master 40 while Henrik’s watch looks like an Audemars Piguet Royal Oak Offshore in Black Ceramic. Both are rated for water resistance, but I am not sure about ice cream. 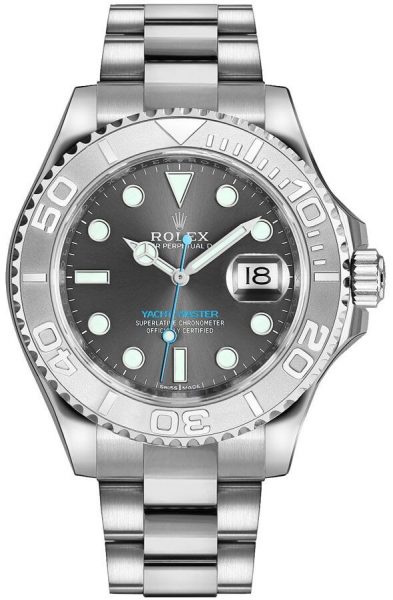 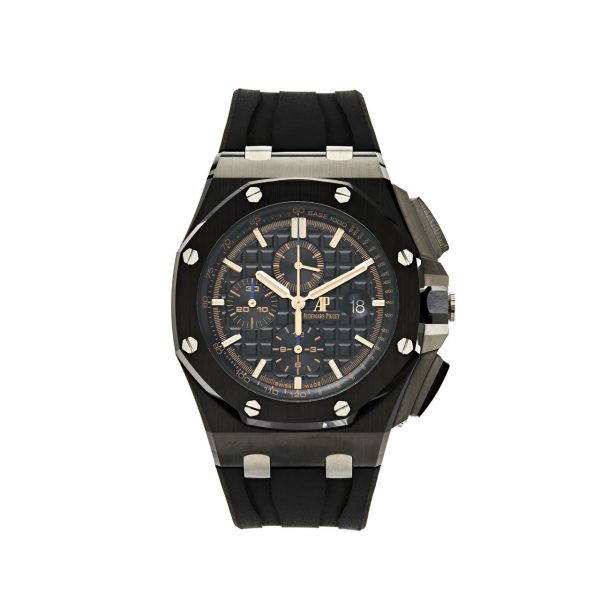 Butch’s Rolex Yacht-Master 40 is the previous version that was discontinued in 2019 and was updated with a new movement and very minor visual changes. The case is still 40mm and made from 904L Oystersteel, a stainless steel alloy that is very corrosion resistant. The right side of the case features a screw-down crown with triple waterproof seals for a 100 meter water resistance rating. The bezel is made from Rolex’s own 950 platinum that is forumulated in their own foundry to ensure it lives up to the quality Rolex demands. The larger bezel has raised numerals that are polished and the background is a sand blasted matte finish. The dial is officially Slate from Rolex but is often called Dark Rhodium by the watch community. The dial is surrounded by white gold hour markers that are filled with Chromalight luminescent material. The dial is also accented by Yacht-Master text and a sweeping second hand that are finished in light blue. Inside the Yacht-Master is the Calibre 3135 self-winding automatic movement that was designed and built in-house. The 3135 is COSC certified movement that contains a Parachrom hairspring for better accuracy during temperature changes or shocks. The bracelet is the iconic Oyster design, made from solid links of Oystersteel. The bracelet comes together with the Oysterlock folding clasp that also features an Easylink extension. Currently the market is still strong on these previous versions and you can expect to pay around $14,200 to get a nice one on your wrist. 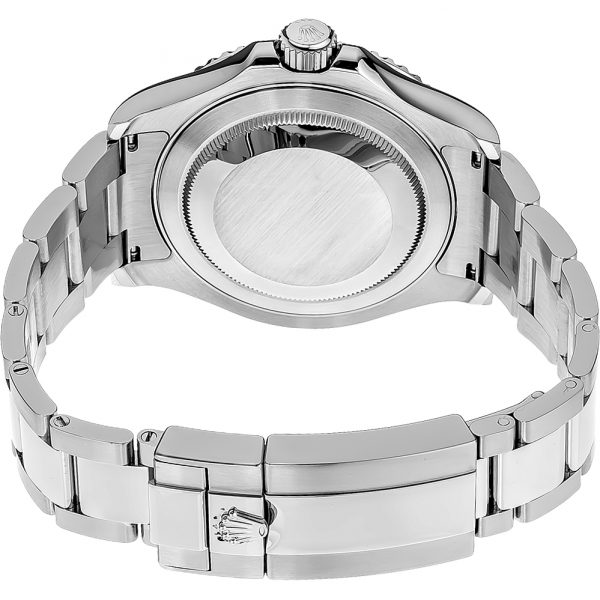 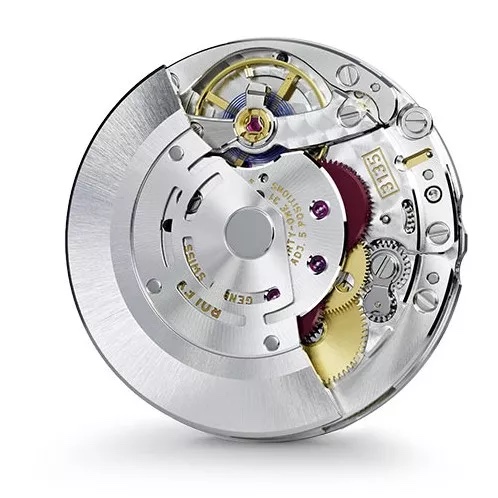 The Audemars Piguet Royal Oak Offshore was introduced in 1992 as the larger sibling to the iconic Royal Oak. Henrik’s Offshore was brought to retail in 2017 and I think has been discontinued recently. The case is on the larger side at 44mm and is made from black ceramic. The caseback features a large display window where you can view the winding rotor and some of the movement. On the right side of the case are the pushers for running the chronograph as well as the black ceramic crown, protected by titanium guards. The octagon bezel is also made from scratch-resistant black ceramic, held down with the legendary hex screws. The dial has AP’s famous Méga Tapisserie texture to it and finished in a gloss black. On the outside of the dial is a Tachymeter scale and pink gold hour markers that are filled with luminescent material. The hands on the watch are crafted from pink gold and the date window is set at the 3 o’clock position. Inside the ceramic case is an AP Calibre 3126/3840 that contains 365 parts. The 3126 also runs on 59 jewels and offers the wearer 50 hours of power reserve. The strap on Henrik’s Offshore is black rubber that is attached to the case with titanium lugs. The two ends of the strap come together with titanium a pin buckle. Royal Oak Offshore models are in pretty high demand and you can expect to pay around $42,000 to get one in your collection. 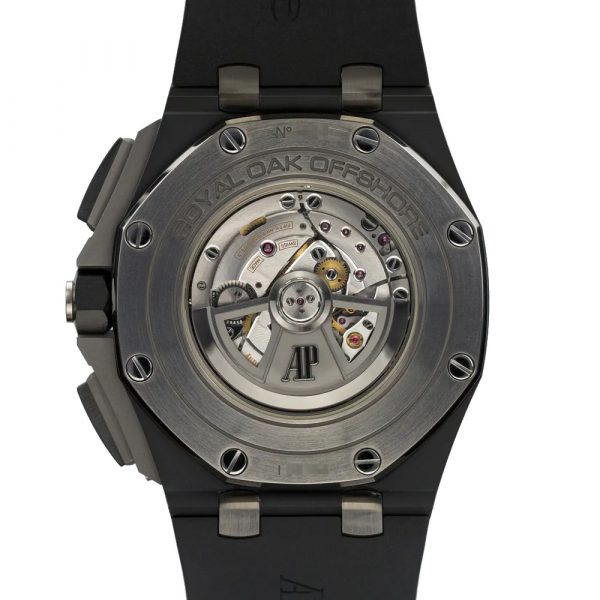 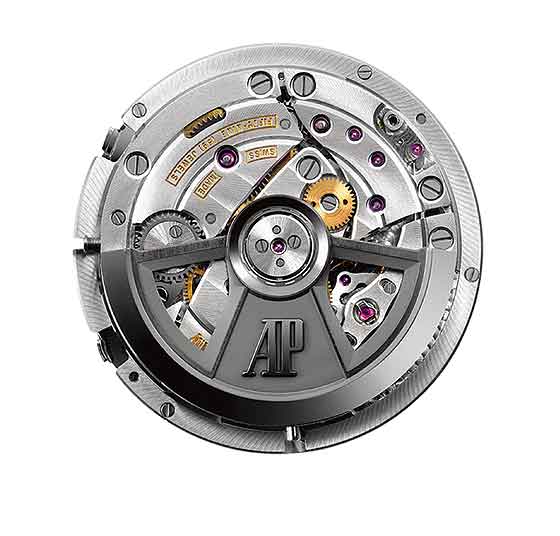 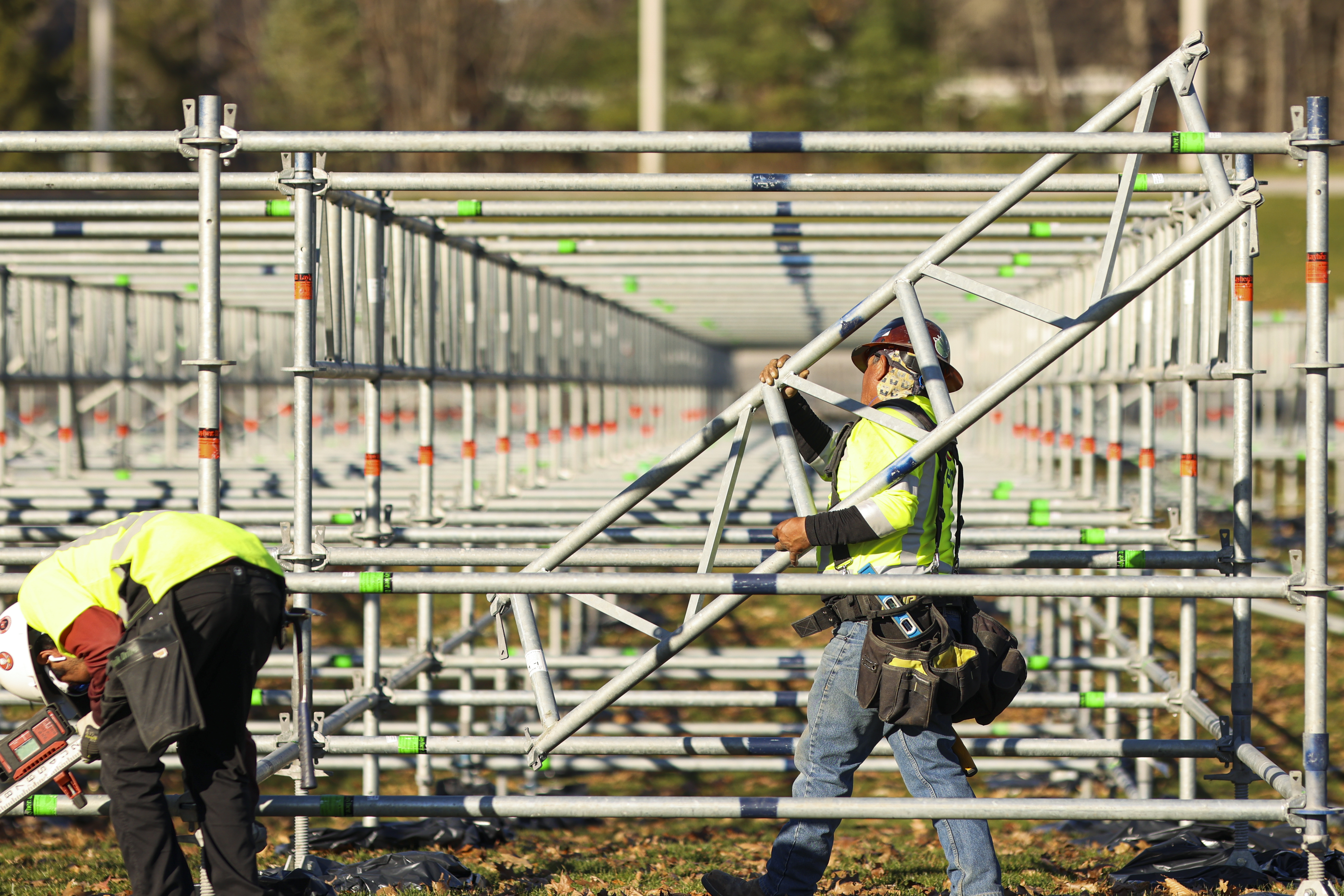 From a recent press release on the PGA Championship, to be contested next in May of 2023, at Rochester’s Oak Hill Country Club:

“For the first time in PGA of America’s history, the groundbreaking of a major championship has started the year prior. In anticipation of any snow that falls in Rochester, and potentially lingers in early 2023, service providers are at Oak Hill Country Club laying the framework and beginning to construct the massive temporary infrastructure for the 2023 PGA Championship buildout.”

“Despite any snow on the ground in January, February and March, these pivotal preparations will allow the buildout to continue and ensure the restored East course is ready May 15-21, 2023, when the PGA Championship returns to historic Oak Hill.”

Originally from Orlando, Florida, Eric has been on the road with the golf industry for over 10 years, most recently in Rochester for the 2023 PGA Championship. His work has taken him to San Francisco for the 2020 PGA Championship, Chicago for the 2018 Women’s PGA Championship, and Williamsburg, Virginia, for the 2017 Kingsmill Championship — while also spending many nights in hotels across the country working for the Symetra Tour (now known as Epson Tour) of the LPGA. Before his career in the golf industry, Eric studied Sports Management at the University of West Florida, where he also pitched for the University of West Florida Argonauts baseball team.

Today, he’s Operations Manager for the 2023 PGA Championship, serving as the conduit between service providers, local agencies, municipalities and more. He sees that all operations happen, from planning to budgeting to execution and restoration.

Our questions touch on the beginning of the build, and what to expect from next year’s run-up to the main event. Be warned, though, that the fifth question is a healthy one!

GolfWRX: Why start in the fall?

Eric Nuxol: Our schedule is generally based on hospitality sales and entirety of scope. We anticipate a three-month build, sometimes a bit more or less. We wanted to make sure that we put ourselves in the position to succeed, regardless of potential winter-linger weather or rough spring weather. By starting in November, we wanted to get three weeks in the bank.

GolfWRX: Tell us which aspects or areas of the build were mandatory for November?

Eric Nuxol: Three areas of the course had our attention. The biggest component is the 4100 tent stakes going into the ground. These will give stability to all of our tents once they are erected. You can’t do it so easily in frozen ground. We will put in 200,000 square feet of scaffold, to support the wooden beams and plywood floors for those tents. When you walk through the PGA Championship shop or the concession spaces, these subfloor grids will provide stability/floor. Later, there will be mesh on the side of each structure, yet it will be something that folks will never see. After that, we will install perimeter fence and chainlink runs. In the spring, the windscreen around the perimeter of the course will go in.

GolfWRX: What will happen in February?

Eric Nuxol: We will resume the three areas on which we are currently working. We want to be above the frost if snow is still there. We do account for potential snow days. Doing everything to jump ahead. Wood on top of steel, followed by frames of tents. then, another group builds out the interior of the PGA Shops.

GolfWRX: What parts of the build wouldn’t you undertake ahead of time?

Eric Nuxol: The most important component is the wood. We do not want wood to rot or warp with temperature and moisture fluctuations that occur during a northern winter. We will begin all wood work in the spring.

There will be no offsite buildings by the PGA for the 2023 championship. We will work on a parking plan for fan, vendor, and media attendance and will develop an efficient shuttle system thereafter. We plan to use portions of open areas of the club’s West Course for broadcast, but we will not erect any structures on the fairways nor greens. The entire shopping district will be built over the club’s driving range. The player’s practice range will be on the West course. (Interviewer’s note: the range will probably be sighted on the West’s 7th hole fairway.)

You (the interviewer) made a Theme-Park comparison. That is not far off. We are extremely focused on guest experience. We want attendees to enter the world of the PGA Championship as soon as they exit the shuttle.

GolfWRX: You were on site for a number of PGA Championships in the past decade. What do you remember from each, and what did you carry forward to 2023?

Women’s and Senior PGA Championships-There are many similar elements, but the construction isn’t as expansive. Both require working with outside groups and local municipalities. We know what the final picture looks like, but we have to fit it to each unique site.

I was at Bethpage during this event, preparing for that year’s PGA Championship. Our PGA team learned a great deal from our time in May 2019 at Oak Hill. We knew that two things would happen: we would be heare in May, four years later for a PGA Championship, and that the East course would close immediately after the tournament for an Andrew Green architectural restoration. The team did not have to start as early as 2023, as the footprint of a Senior PGA is not as large. The 2019 team gathered information  on golf course preparation for a May major championship through its work with the club’s grounds crew and we are able to carry that information forward for 2023.

If you haven’t seen it, the Bethpage State Park property is massive. There are five, 18-hole courses on site, and the Black course extends for nearly a mile, from the first tee to the ninth tee. We used bits and pieces of the five courses, and had a lot of room for buildings. The PGA will return to Bethpage for the 2025 Ryder Cup, and we will revisit all of our notes in advance. There is such a luxury in having so much room. It is unique seeing what you can do when you have that much property. It is a bit similar with Oak Hill having two courses, but want to minimize our use of the West course, to ensure that club members will have room to play.

We tested the all-inclusive ticket option at Southern Hills. It allowed the holders to walk up to markets for concession and make their selections from food and non-alcoholic beverage options. Making those a part of the ticket allowed for a different level of service, and also eliminated a certain number of wait lines. Regarding set-up, our notes account for additional volume arrangements of these products with our championship event suppliers.

We had a few, cooler weather days in Tulsa, and we had to make adjustments on tent and crew assignments. It felt as if we experienced all four seasons throughout the four days of the tournament. The first few days had us in the 90s and then a front came through, bringing 57 degrees on Saturday morning. Ironically, the temperature in Rochester that day was in the upper 70s. Our fingers are crossed for good weather next May!

GolfWRX: What question haven’t we asked, that you would love to answer? Ask it and answer it, please, and thank you for your time.

Eric Nuxol: Q: What part of the early build are you looking forward to most?

A: Getting a head start is always nice, but I think being able to see our project managers and crews earlier than usual and catching up with them in person. 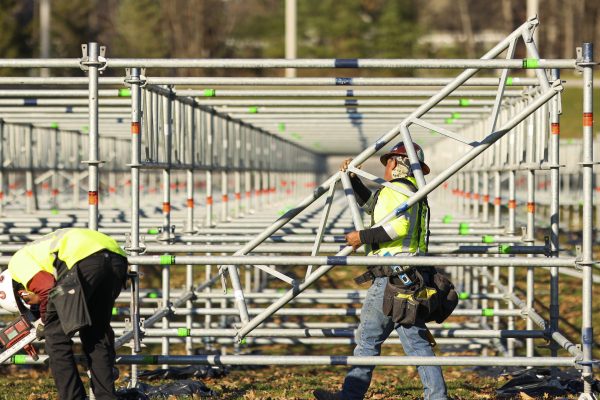 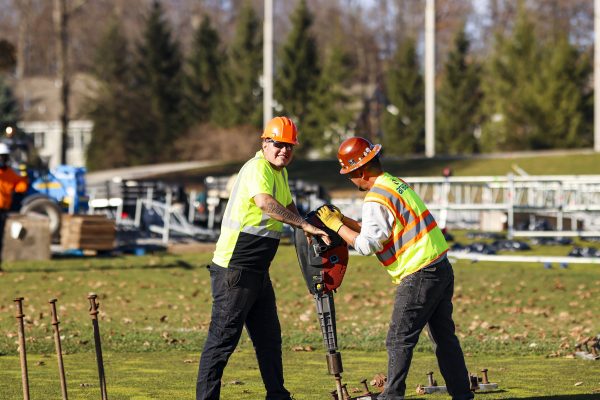 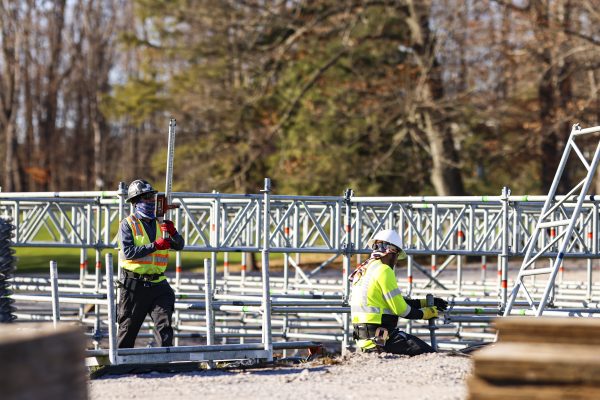 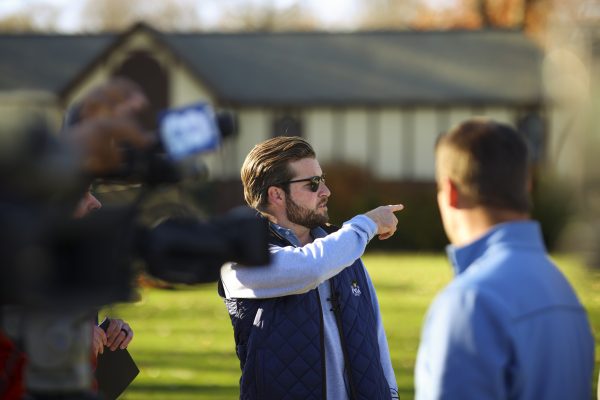