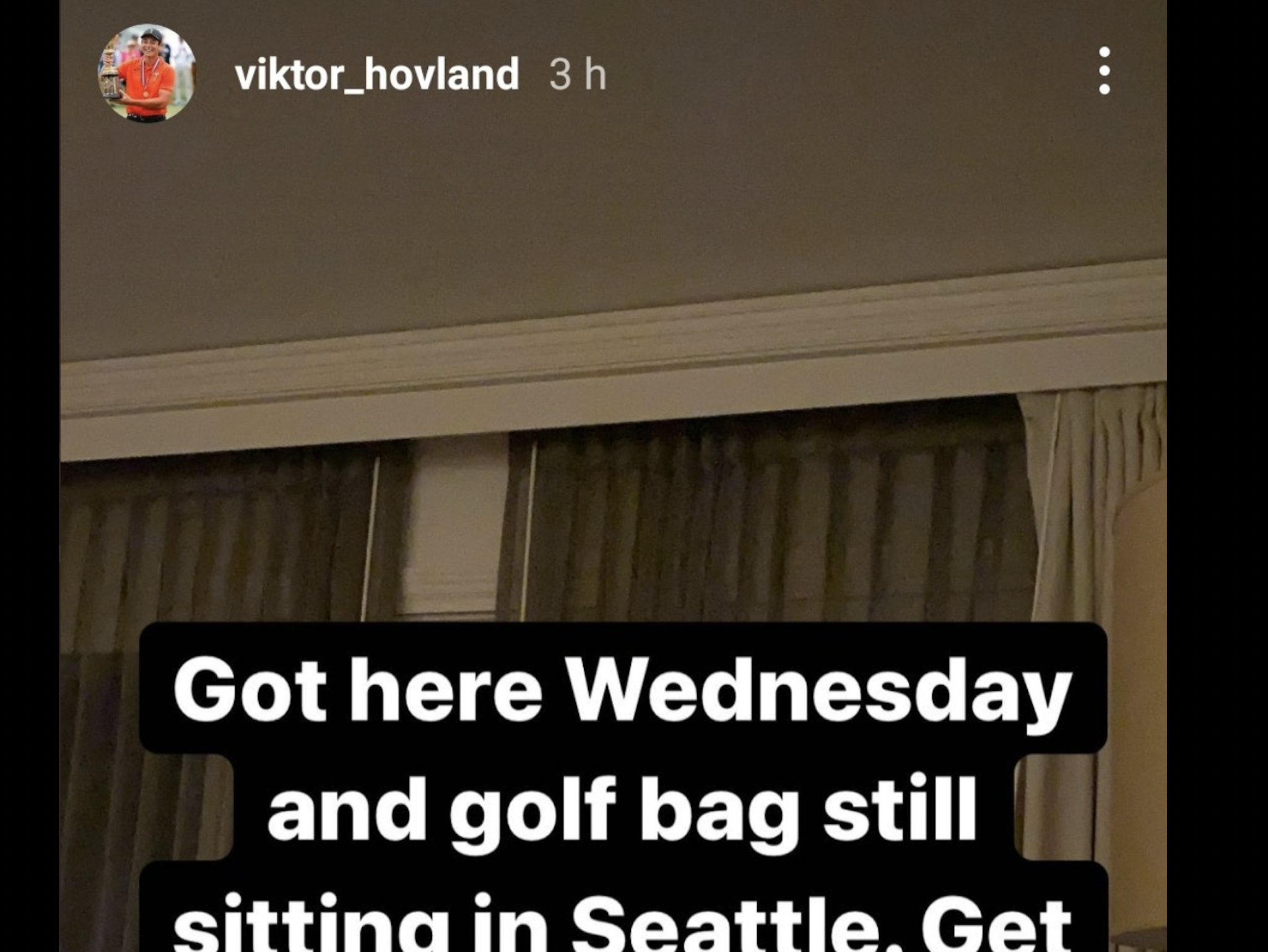 Viktor Hovland’s trip to Hawaii to play in the Sentry Tournament of Champions this week got off to a rocky start.

The Norwegian’s clubs were stuck in Seattle while he was in Maui, and it’s safe to say he was not best pleased with Delta for the inconvenience – letting his feelings known on his Instagram story (pictured below in a tweet from @golfbettingclub).

As of Tuesday morning, Hovland’s clubs were yet to arrive to his hotel. He has been playing great golf the past few months and should be an excellent fit to contend at Kapalua this week. While he has bounced back from equipment issues in the recent past and won at Mayakoba despite having his driver break on the range prior to the event, it certainly isn’t an ideal way to start the week. 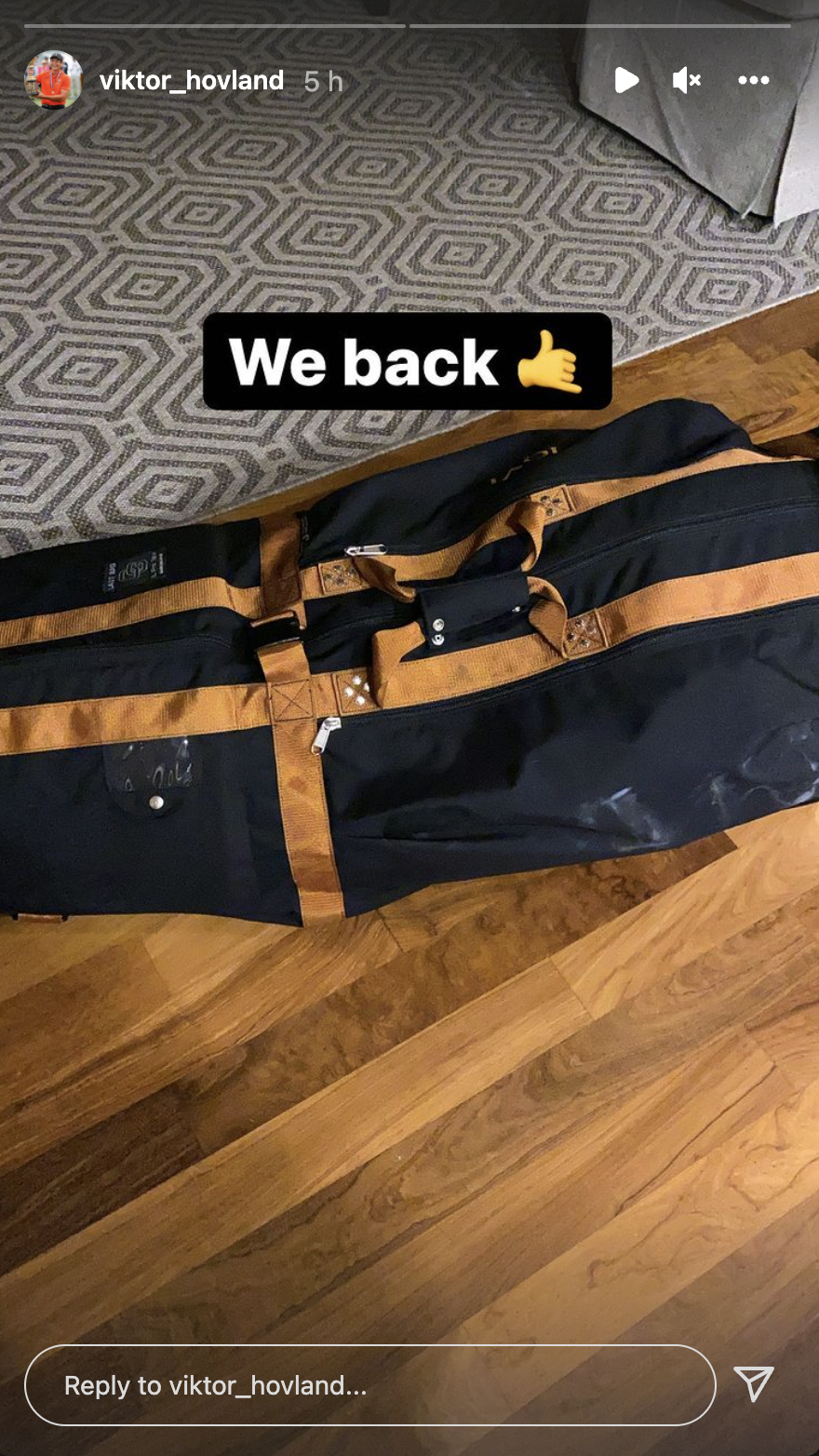 …but unfortunately for Hovland, it seems that his driver has broken in the shipping process: 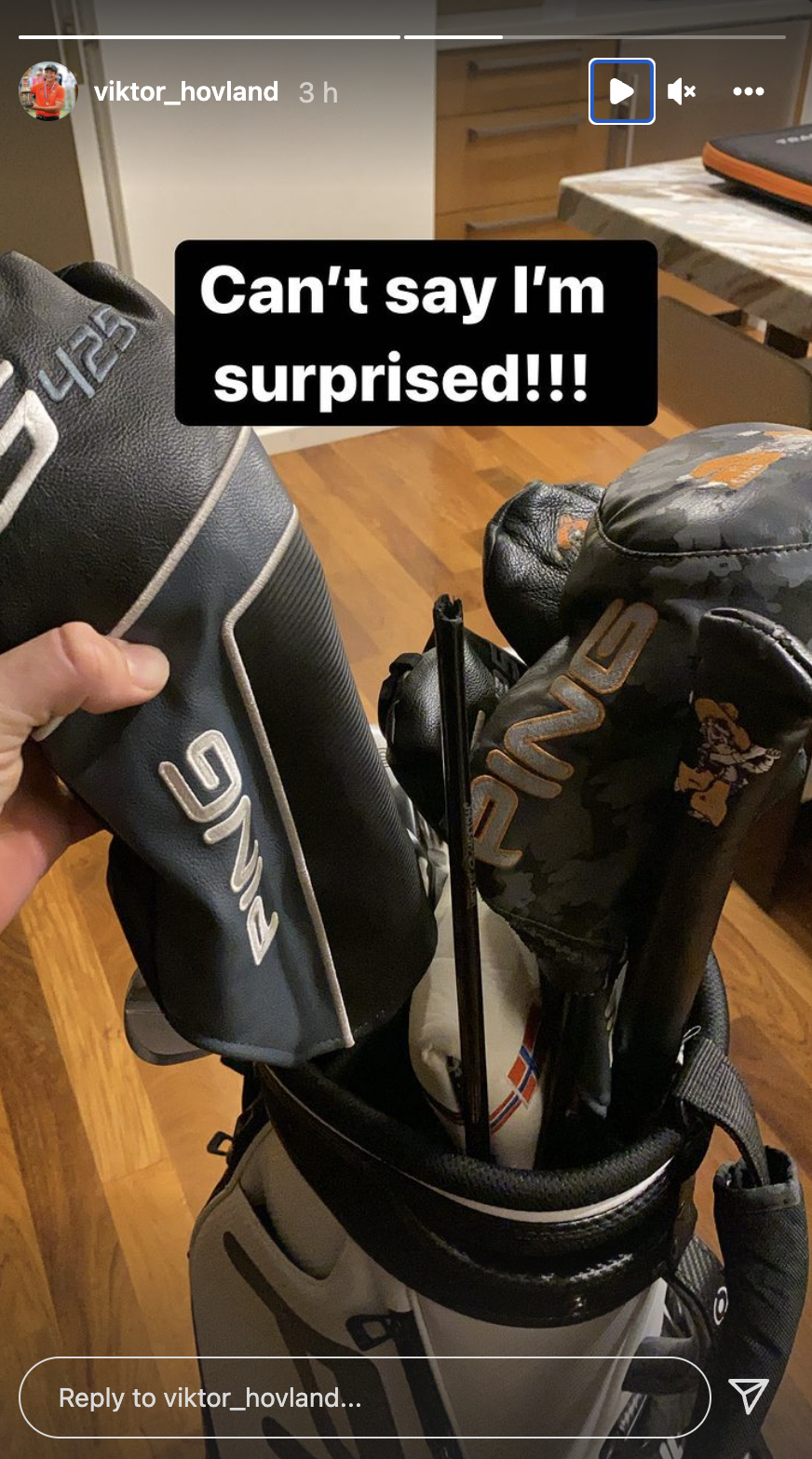 Where’s Danny Lee when you need him? 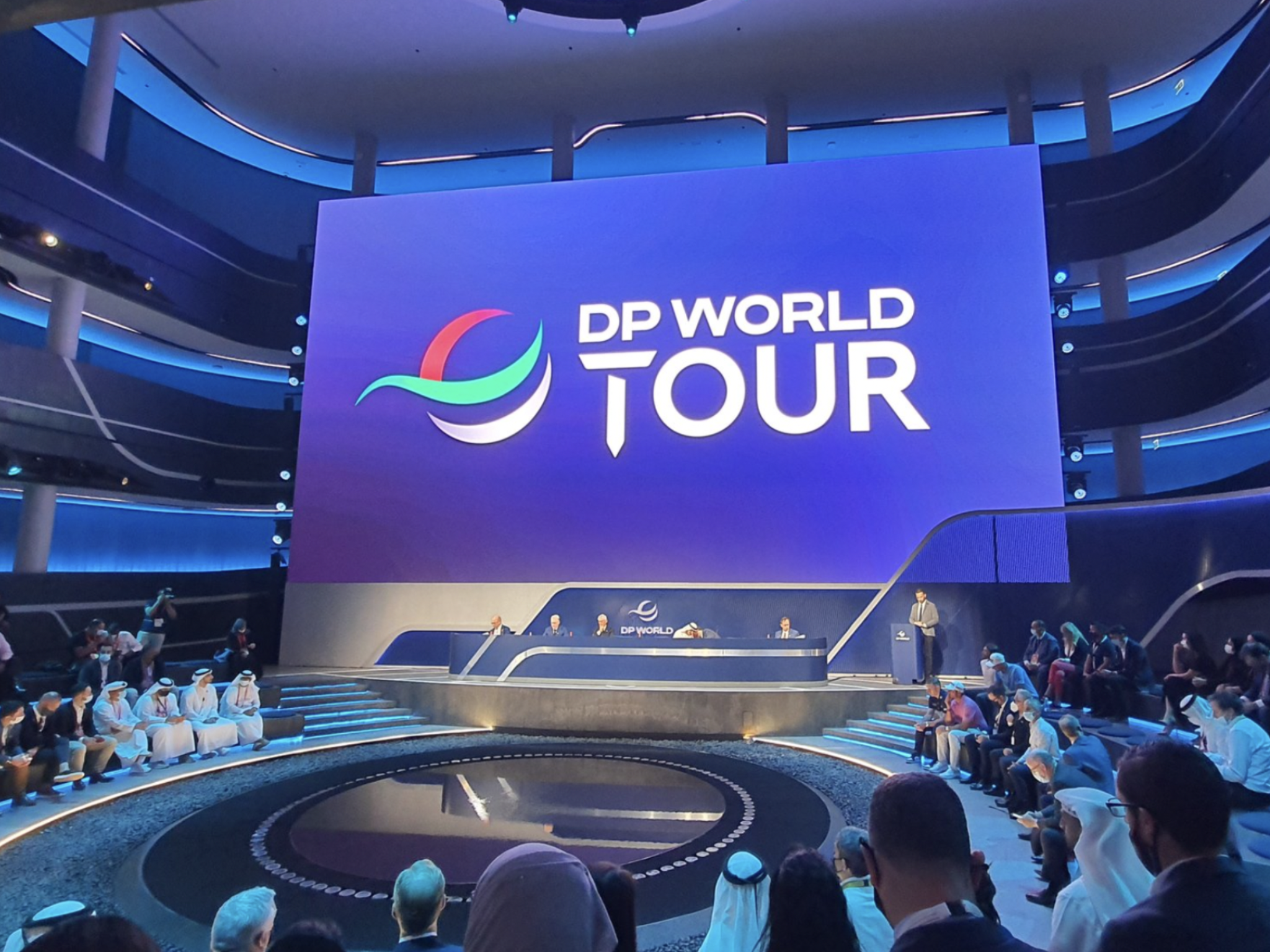 16 LIV Golf players have threatened the DP World Tour with legal action after being banned from the Scottish Open and fined £100,000.

The 16 players will likely include Europeans such as Ian Poulter, Lee Westwood, Sergio Garcia, Graeme McDowell and Martin Kaymer. In the letter obtained by “The Telegraph”, the players said that the Tour’s actions to ban and fine players “will have adverse consequences on the DP World Tour.”

The letter ‘implored’ the DP World Tour to “reconsider your recent penalties and sanctions” and rescind the fines and suspensions by 5pm on Friday. If the Tour doesn’t rescind the bans and fines by that time, the players will be taking immediate legal action. “If not, you will leave us with no choice but to employ the various other means and methods at our disposal to rectify these wrongs,” the letter states.

Additionally, the 16 players criticized the DP World Tour’s new deal with the PGA Tour that will see the top 10 players on the Race to Dubai rankings earn PGA Tour cards.

“In Mr Pelley’s latest communication, he uses the statement that every action in life comes with a consequence. We agree, and we are concerned that the actions of the Tour against us, LIV Golf, and golf in general will have adverse consequences on the DP World Tour, a tour and an organisation that, despite our recent interactions, we care deeply for.

“The intention of this letter is not to further divide us, but to respond to Tour statements and to pose questions that the Tour should answer and we should discuss in detail. Instead of spending our time, energy, financial resources, and focus on appeals, injunctions, and lawsuits, we would implore you, the custodians of the DP World Tour, to reconsider your recent penalties and sanctions, and instead focus our energies on forging a path forward that is better for the DP World Tour members and the game of golf.

“To this end, we ask that you rescind your fines and suspensions by 5:00 pm on Friday, July 1, 2022. In addition, we represent over 5 percent of the DP World Tour membership and, under its articles of association, we ask you to convene a meeting of Tour membership to discuss these important matters further. If not, you will leave us with no choice but to employ the various other means and methods at our disposal to rectify these wrongs.

“We appreciate that the argument being put forward is that the ‘strategic alliance’ with the PGA Tour will provide overall benefit to DP World Tour members – hence the competitive threat to the PGA Tour being treated differently when it comes to releases and other matters.

“To begin with, we do not accept that protecting the PGA Tour through this alliance could in any way justify this disparate treatment. Even if it could, what are these benefits? This a question we have asked for many months.

“Thus far, the option to play the Barracuda Championship instead of the Scottish Open doesn’t appear to be one that benefits the membership at all. Ultimately, approximately 40 DP World Tour members who would have been eligible for the Scottish Open on the DP World tour will now not be eligible, and instead will only have the option to go and play on the PGA Tour in Kentucky the week before The Open, for less money but at a higher cost to participate.

In response, the DP World Tour released this statement on Friday morning:

“There has been a leak to the media of a letter we received on behalf of a number of LIV Golf players which contains so many inaccuracies that it cannot remain unchallenged.

“Before joining LIV Golf, players knew there would be consequences if they chose money over competition. Many of them at the time understood and accepted that. Indeed, as one player named in the letter said in a media interview earlier this year; ‘If they ban me, they ban me.’ It is not credible that some are now surprised with the actions we have taken.

“The letter claims that these players ‘care deeply’ for the DP World Tour. An analysis of the past participation statistics on our Tour in recent years of several of the leading players named, suggests otherwise.

“One player in particular named in the note has only played six Rolex Series events in the past five years. Another one, only four. I wish many of them had been as keen to play on our Tour then as they seem to be now, based on the fact they have either resigned their membership of the PGA TOUR or, if they are still in membership, have been suspended indefinitely.

“Furthermore, given how deeply these players say they care about the DP World Tour, perhaps some of them could have played in Ireland this week in support of our new title sponsor, in particular one player who gave us a signed commitment to play at Mount Juliet.

“With that player currently in action at Pumpkin Ridge, you can imagine the allegation in the letter that we are in the wrong, is hard to accept.

“We also take great exception to an allegation made near the end of the letter which states we are somehow playing ‘second fiddle’ to the PGA TOUR. Nothing could be further from the truth.

“We held a player meeting in Ireland on Tuesday where we outlined in great detail all the many benefits of our expanded relationship with the PGA TOUR.

“One of those is an unprecedented ten cards on offer to the PGA TOUR, cards that many of the players named in this letter desperately wanted to attain in the early stages of their careers. Why now be critical of those trying to do the same?

“The letter also expresses supposed concern about the future of the DP World Tour. Rest assured no-one should have any worries on that score.

“The DP World Tour is a vibrant, independent and global Tour with increasing and guaranteed prize fund growth over the next five years. We have fantastic tournaments across the year including a host of wonderful national Opens, all played in front of huge crowds, illustrated perfectly by this week’s Horizon Irish Open.

“Finally, it would not be appropriate for me to comment on any potential legal matters.

“I will simply reiterate that our Members’ Regulations which have been in force for more than 30 years, have been accepted by all the players, are there to protect all of our members, and we will use them to take all necessary steps to protect their interests.

“The sanctions for those members who knowingly broke our rules by playing at the Centurion Club without a release are proportionate, fair and, I believe, considered necessary by the majority of our members.” 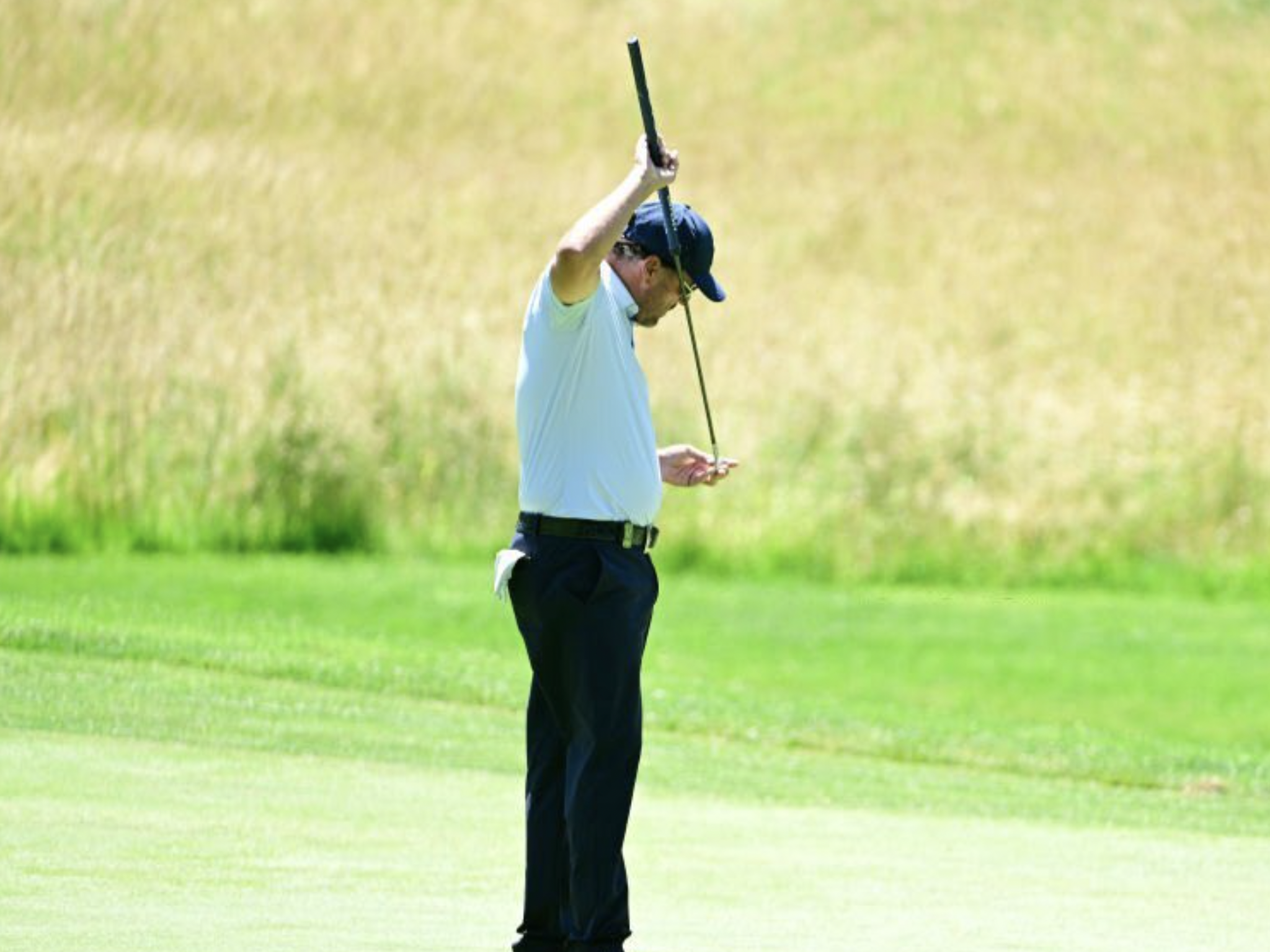 For many years, golf fans watched Phil Mickelson using what may have been one of the shortest putters on tour, but while he won the PGA Championship with his trusty Odyssey Milled Blade “Phil Mickelson” he’s been tinkering with the length for a while.

Last September at the Fortinet Championship, Phil was spotted with a new, extended, grip on the flat stick, allowing him to create an ‘arm-lock’ style that made him feel as if, “I’ll get on a roll and just start making a lot.”

So to this week’s LIV tournament at Pumpkin Ridge, and the six-time major winner is experimenting once again.

Twitter’s ‘Phil Mickelson Tracker’ posted a photo of his extended putter with the one-word exclamation “#Armlock!”

The replies were mostly positive, suggesting it can only help the three-time Masters champion improve past some poor putting stats. Indeed, since a standout gain of over 12 shots putting at Kiawah Island, Lefty has lost strokes to the field in nine of his last 12 recorded starts, with his worst performance being a loss of over ten shots at the BMW Championship last August. No wonder he lobbed on the extra rubber at Napa.

With his Callaway deal on hold, Mickelson has also made a change in his wedges.

Lefty has a Ping Eye2 wedge in the bag this week, with the model being an Eye2 XG (a reproduction of the original Eye 2 but with 2010 conforming grooves) which he has used occasionally since 2014.

Mickelson sits T30 after the opening day’s action in Portland, after shooting a disappointing round of 3 over par on Thursday. 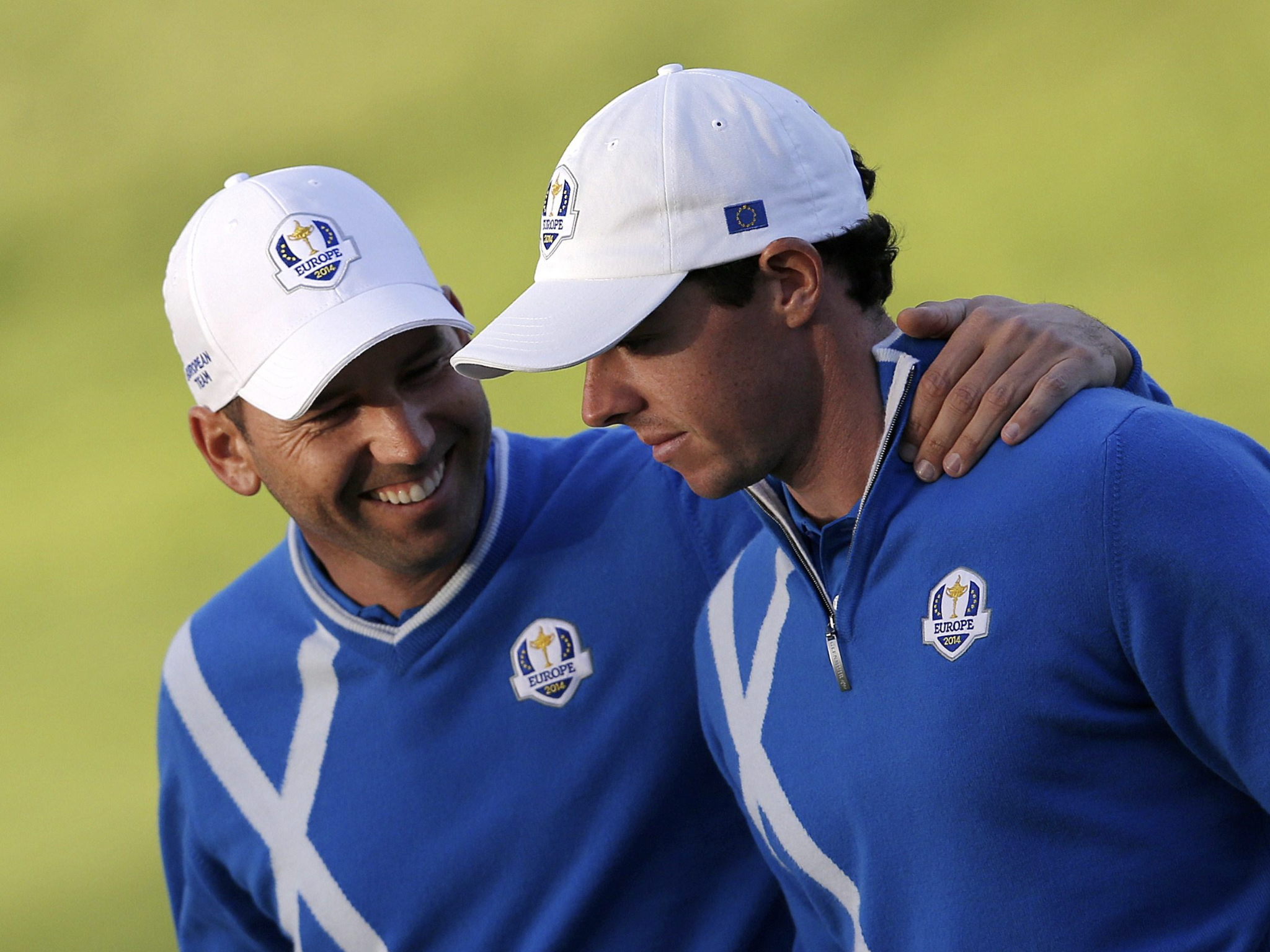 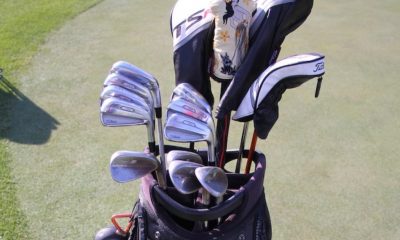 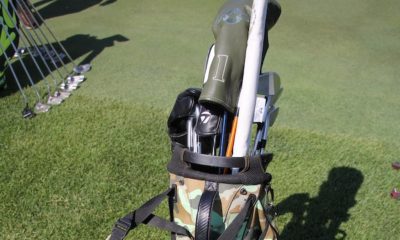 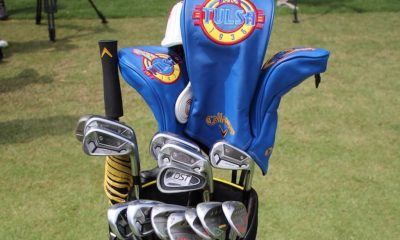