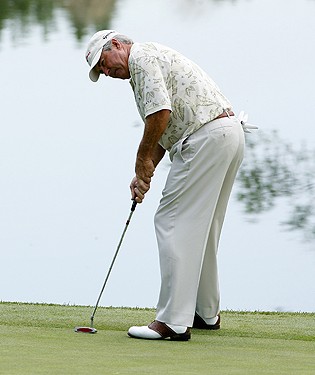 When I faced a 15-foot putt to win the 1976 PGA Championship, the amount of time I took surprised a lot of people. Instead of grinding over it, I took less time than usual — 15 seconds in all. But I did not rush. I knew that if I got hung up dwelling on how much the putt meant, my chances of holing it would have dropped dramatically.

The moment you try to make a putt, you’ll miss it. Conscious effort doesn’t work. Try this experiment: Get a pen and paper and jot your signature. Now write your name a second time, trying to duplicate your first signature exactly. Chances are you’ll make a mess of it, because instead of doing it automatically, you’re now applying conscious effort. Your approach to the six-footer should be like signing your name: Do it briskly and subconsciously.

Speed and line are equally important, but the amateur tends to be preoccupied with the line. As you read the green, do it with the idea that you’ll roll the ball 16 inches past the hole — if you miss. After you’ve set up and taken dead aim, don’t give the line another thought. Avoid being too aggressive with the six-footer, because the edges of the hole might come into play and cause a nasty lip-out.

3. Stay away from dead straight

When Tiger Woods faced that 12-foot putt on the 72nd hole at Torrey Pines to send the U.S. Open into a playoff, he called in his caddie, Steve Williams, to help with the read. I’ll bet Tiger saw the putt as breaking to the left but was bothered by a hunch that it might be dead straight. If there’s one thing a good putter hates, it’s an absolutely straight putt. The reason is, if you start the putt straight, you have a margin for error of only half a cup on either side. Tiger needed Steve to confirm that the putt would break left, because the entire cup would be exposed if Tiger started the ball to the right. The putt indeed broke a couple inches to the left, and Tiger snuck it in on the right edge of the hole.

If the putt for all the marbles looks straight, look again. Study the area near the hole. Remember, the ball will be rolling so slowly when it gets within two feet that even the tiniest slope will cause it to break. Try to at least favor one side.
stockton

4. You’ve already made the putt

You might have heard that it’s helpful to form a positive image of the ball going in, but you should take it further than that. Imagine the ball tracking the entire six feet, as though you’re watching a video replay of the putt dropping. This image should be so convincing that, if the putt doesn’t fall, you should be shocked. That’s how I feel when I’m putting well — I’m absolutely stunned when the ball doesn’t go in. 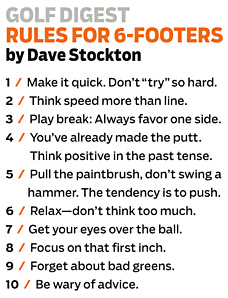 Do everything you can to place the six-footer in the past tense. How many times have you missed a putt, raked it back for another try and instinctively knocked it in? Adopt this “second chance” mentality on your first putt.

5. Be a painter, not a carpenter

For the good putter, the most common miss under pressure is the push. When the heat is on, there’s a tendency to hit at the ball instead of stroking through it. Like driving a nail with a hammer, the putter stops abruptly at impact. It doesn’t release to a square position, and the clubface is aimed to the right. Putt as though you’re pulling a paintbrush, your hands leading and the clubhead trailing as you stroke through.

6. Your last thought: none at all

You should have no coherent thought as you draw the putter back. Avoid saying an actual word or phrase to yourself, even a seemingly positive one such as smooth. All it will do is block the overall sense of flow you must feel to make a good stroke. The only “thought” should be a vague feeling of relaxation, readiness and rhythm. All you’re doing is allowing your subconscious mind to take over so you can invite that wonderful sense of feel where you know the putt is going to go in. Remember, there is no actual language when you’re in that sharp mental state called The Zone.

7. Get your eyes over the ball

Putting mechanics are mostly a matter of preference, but there is one universal rule for putts from six feet and in: Eyes over the ball. For most players, that means standing closer to the ball. This simplifies things enormously. It’ll help you swing the putter straight back and through. It’ll make you less handsy and decrease your chances of fanning the face open and closed excessively. And you’ll see the line better. Come to think of it, it’s a good rule for all putts.

8. Focus on that first inch

In determining the line of the putt, the only area of true precision is the first inch the ball travels. If you’ve read the putt correctly, all you need to do is make the ball roll over a spot one inch in front of it. Be painstaking about that inch. At address, keep your eyes riveted on the spot. Your biggest priority is to keep your eyes still until the ball has traveled one inch past impact. This will keep your head from moving, which is a cardinal sin. Even if you feel anxious, focusing on that all-important spot will guarantee a smooth stroke.
stockton

Under pressure, all of your senses are heightened. There is a tendency to see more obstacles than usual along the line — scuff marks, ball marks, footprints, disruptions in the grain and so on. Ignore them. If you strike the ball solidly and impart a true roll, the chances of anything knocking the putt off line are remote. If a spike mark is so significant that you’re sure it will affect the roll, play a shade less break and roll the ball with a bit more speed to avoid it.

10. Take advice with a grain of salt
Most amateur golf is played at four-ball match play. If you’re going to use your partner for reading greens, make sure he knows how you read putts and how firmly you hit them. The best partner I ever had was Al Geiberger. We did well in the old “CBS Golf Classic” series, because our putting styles were similar. When Al said, “It breaks half a cup,” I knew he said it knowing how hard I would stroke the putt. Whether it’s a member-guest or your weekend game, see how the two of you read putts. Make it a focal point of your partnership.