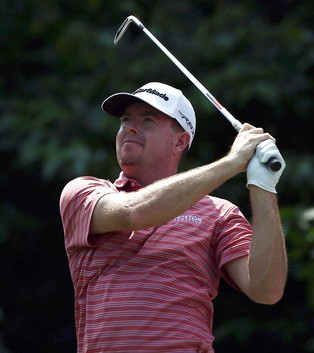 Back-to-back rounds of 64 have earned Robert Garrigus a two-shot lead at 14-under at the halfway mark of the CIMB Classic, but 18 players still stand within seven-strokes of Garrigus on a course very susceptible to low scores.

The first round yielded a stroke average of 68.76, while wet conditions allowed ball-in-hand and an even lower scoring average of 68.43 in the second round. Tiger Woods, who has carded rounds of 66 and 67, is just five shots back and is looking for a big weekend in Malaysia — a country he returns to for the first time since winning both the individual and team titles at the 1999 World Cup.

“The golf course can be had, especially if we have ball in hand like we did today,” Woods said after Round 2.

Woods has given back four shots through two rounds, with both of Friday’s bogeys coming after wild tee shots to the right on Nos. 4 and 12. However, Woods has capitalized on the Mines Resort’s easiest holes, birdieing all three par-5s and the drivable par-4 15th each of the first two days.

While Woods is certainly in contention at this point, he’ll have to step on it through the weekend, especially if Garrigus gets to the number he’s shooting for.

Meanwhile, Jbe’ Kruger sits two strokes behind Garrigus, as he backed up an opening-round 66 with a 7-under 64. Kruger’s round may not have been the lowest of day two – -fellow South African Trevor Immelman shot an 8-under 63 to grab a share of 11th place at 7-under — but it had to be the most impressive, as he played with Woods for the first time.

In a situation where many have crumbled through the years, Kruger’s play bested the World No. 2 by three shots, making eight birdies to just one bogey. Kruger gained entry to the CIMB Classic by ranking inside the top 10 of the Asian Tour’s Order of Merit. In February, he won the Avantha Masters, an event sanctioned by both the European Tour and Asian Tour.

“I think playing with him (Woods) definitely made me concentrate a bit harder,” Kruger stated. “That is the one thing I’ve been lacking the last couple of months, so I think I want to play with him everyday.”

First-round leader Troy Matteson, who carded an 8-under 63 on Thursday, shot 2-under 69 in round two and joins Australian Greg Chalmers tied for third at 10-under for the tournament.

Brendon de Jonge and Kevin Na are tied for fifth with Woods at 9-under through 36 holes, while 2010 champion Ben Crane, 2011 runner-up Jeff Overton and Brian Harman all sit in a tie for eighth at 8-under.

Eight players accompany Immelman at 7-under in a tie for 11th, including defending champion Bo Van Pelt and his fellow Americans Bill Haas, Chris Kirk, Kevin Stadler, Pat Perez and Tom Gillis. Charlie Wi, a late replacement for Rickie Fowler, and Martin Laird are also at 7-under, seven back of Garrigus.

Meanwhile, Asian Tour and Malaysian qualifiers have shown the ability to post scores, but may not have the consistency to contend this week.

Asian Tour player Gaganjeet Bhullar found himself just two shots back following his opening round 65, but carded a 1-over 72 on Thursday to lose pace. Malaysian qualifier Danny Chia posted a quality round of 66 on day one, but fell well back after a second-round 75.

Through two rounds, Thaworn Wiratchant and  hold the best standing of their contingent, at 5-under for the tournament and tied for 23rd. Wiratchant, who is in his ninth-straight week of competition, rallied Friday with a 7-under 65, bouncing back after opening the event with a 2-over 72. 25-year-old Lahiri carded a bogey-free second round of 5-under 66, after an even-par opening round.

Garrigus has reached 14-under for the tournament thanks to an eagle and 15 birdies to just three bogeys. The 35-year-old has had a strong 2012 PGA Tour season, earning seven top-10 finishes, two of which came in the FedEx Cup playoffs.

“If I keep putting like this on the weekend, its going to be hard to catch me,” Garrigus said. “I do have a very high confidence level right now. I feel like I can beat anybody, doesn’t matter who I’m playing.”