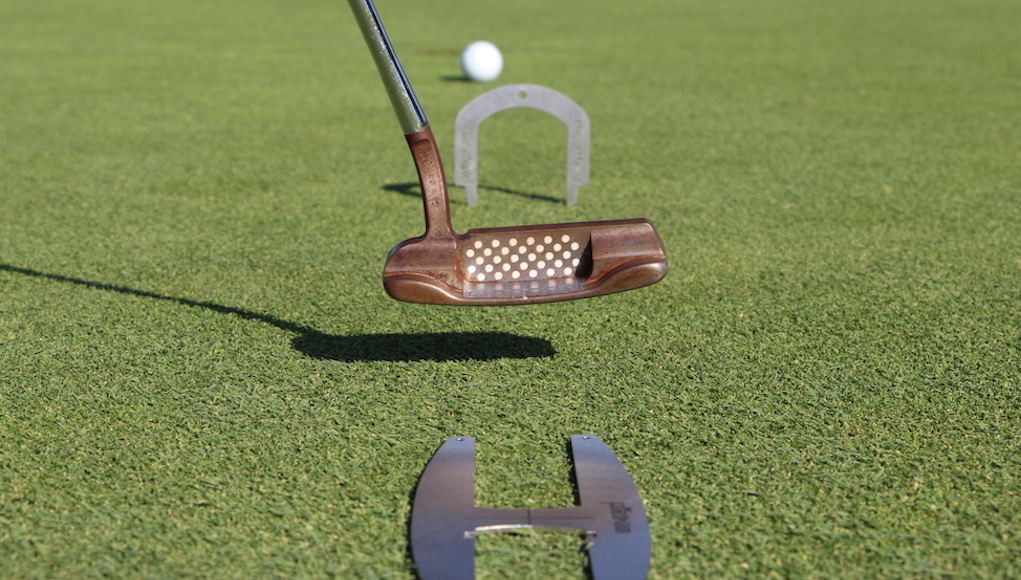 One of the most important aspects of putting is the repeatability of your stroke. That’s because reading putts perfectly isn’t very helpful unless you can consistently control your speed and direction on the greens.

The average amateur has little control over how the putter moves back and forth, thus they have little consistency in how the ball comes off the blade. The mechanical side of putting is all about getting the ball to leave the putter face exactly where you want it to.

The question is, how can golfers accomplish greater consistency on the green? Below are 4 keys to help you hone the repeatable putting stroke you’ve always wanted.

Note: Before I begin, I want to make clear that I’m only focusing on the horizontal (side-to-side) launch of the ball, which governs the starting direction of your putt based on your intended line. We’ll assume you have perfect vertical (up-and-down) launch characteristics, which will be the topic of another story.

1) Address Alignment of the Putter Face

It’s nearly impossible to be consistent on the greens if your putter face is aimed away from your target line.

In your practice sessions (on a real putting green or your carpet at home), use visual keys in practice such as putting mirrors, T-squares, chalk lines and lines on the golf ball so you can understand the difference between open, closed and square.

Don’t forget about putter designs! Different players respond differently to certain designs, and finding the right match for you could drastically improve your alignment. Take the time to read what David Edel says about how your alignment changes with different putters.

Also, I highly encourage you to use some kind of putting analysis technology at your closest fitter or instructor that has the technology. It can help you diagnose a problem that you may not even have known existed. I personally recommend SAM Puttlab, an ultrasound machine that measures more than 20 different factors of a putting stroke.

Below is an example of the feedback that SAM Puttlab offers. I have used it in my academies for more than 10 years to give my students a better understanding of their putting motion. 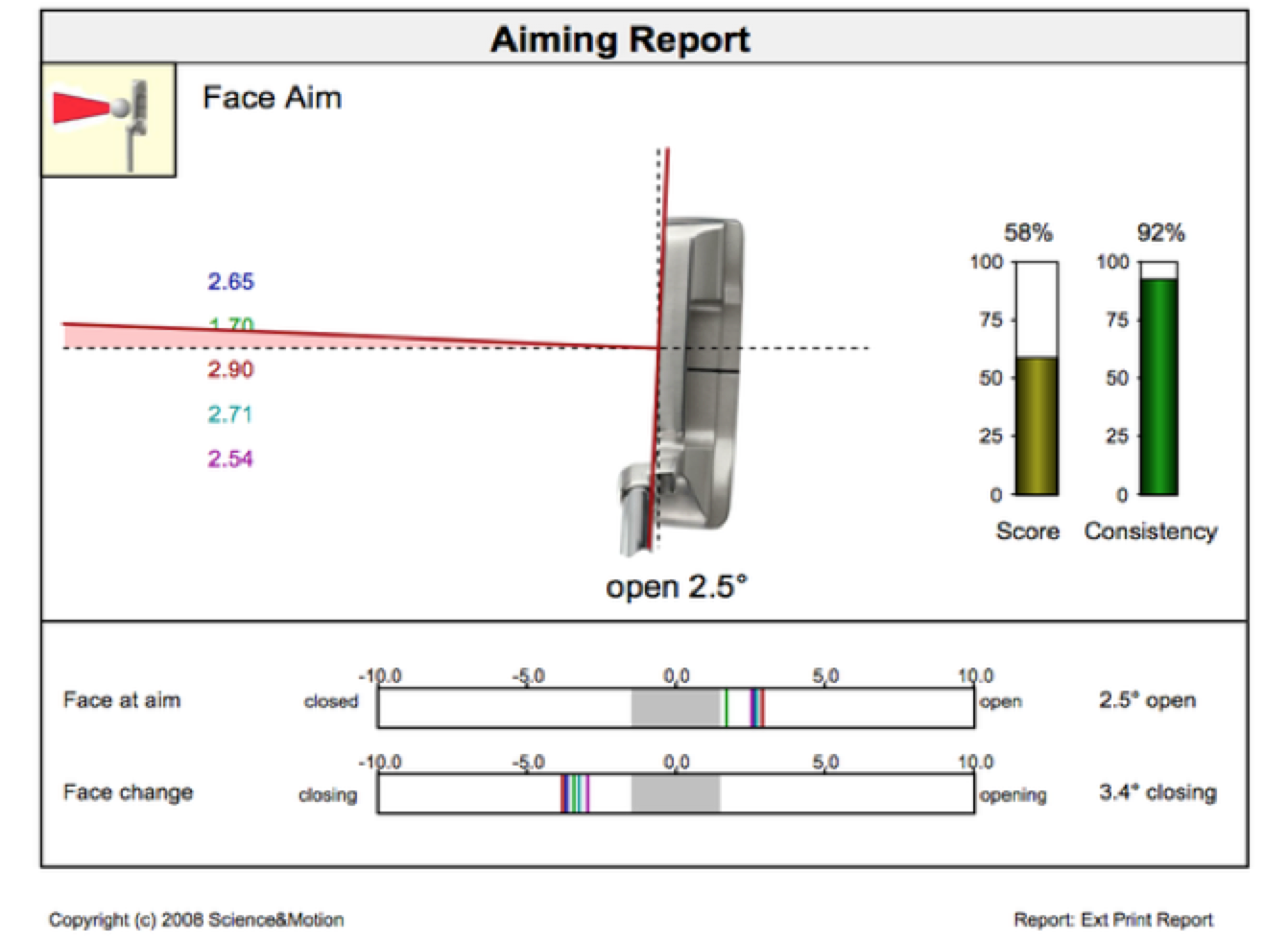 First, note the alignment of the blade at address. You can see that this player has a propensity to line up the face about 2.5-degrees open (to the right) of his intended target. It’s true that many players have issues aiming the putter perfectly at address, which they have to make up for during the stroke by altering their club face or club path into the ball. The more manipulation you have in your stroke, the more you have to rely on your hand/eye coordination to take over for your faulty alignments.

If you’re new to SAM, consult a professional instructor to ensure you’re reading the results properly. Diagnosing your issues is key to developing a plan to improve.

2) Impact Alignment of the Putter Face

The second factor in putting consistency is the ability to return the blade to square at impact. As we saw above, the sample player’s putter was 2.5-degrees open at address, meaning an adjustment had to be made during the stroke to avoid pushing the ball to the right. 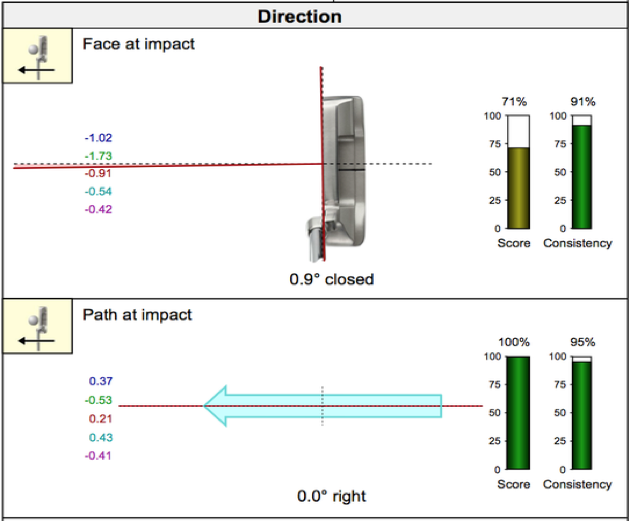 Thankfully, this player closed the putter face during the stroke and had a path that was right down the line. Ultimately, his horizontal launch conditions were not skewed, but it’s a move that’s very difficult to repeat consistently. It’s best to start with a square face, and return the face to square at impact.

NOTE: The face angle of the putter at impact accounts for more than 80 percent of a balls starting direction.

3) The Path of the Putter Head

Putting devices that provide feedback based on starting direction are very effective. The training aid above is from Perfect Putter, which leaves no doubt whether your putt was hit on line or not.

I am not so concerned with what your stroke shape looks like (square-to-square or on an arc), but I do care where the ball starts. It’s tough to putt the ball through the gate if you have a face angle or path that isn’t on the intended target line. Remember, if you can align yourself properly at address, you’ll greatly reduce the amount of adjustments needed during the stroke.

4) The Rotation of the Putter Head

The last key is how the putter opens and closes during the stroke. The rate of closing is very important and highly correlated to the type of putter and putting stroke you employ. 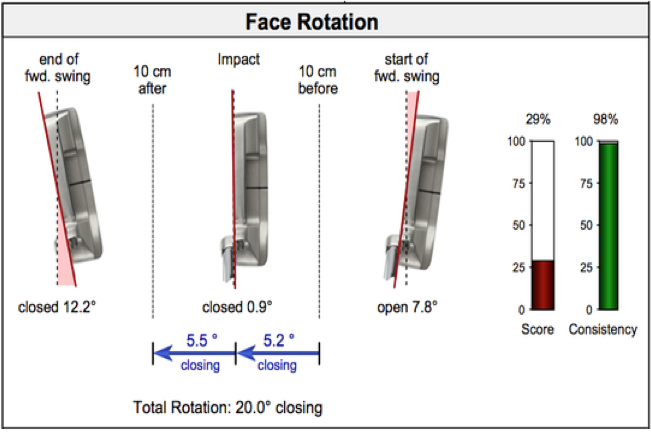 Simply put, if you use more of a square-to-square method, you should gravitate toward a face-balanced putter. The more arc you employ in your stroke, the more you should seek a putter with toe hang. Of course, this is a general rule, but one that works more often than not.

To test the putter you are using, balance the shaft on your index finger and see where the face of the putter points. If it points directly skyward you have a face-balanced putter; if not, you have a toe-hanging putter of some kind.

Getting your stroke diagnosed and finding the right putter can definitely be accomplished during the winter, so no excuses. Plus, you can practice your stroke and alignments while putting in your living room. Happy experimenting!

Improve Your Transition: The Role of the Arms and Hands

The New and Improved Way to Hit Chip Shots