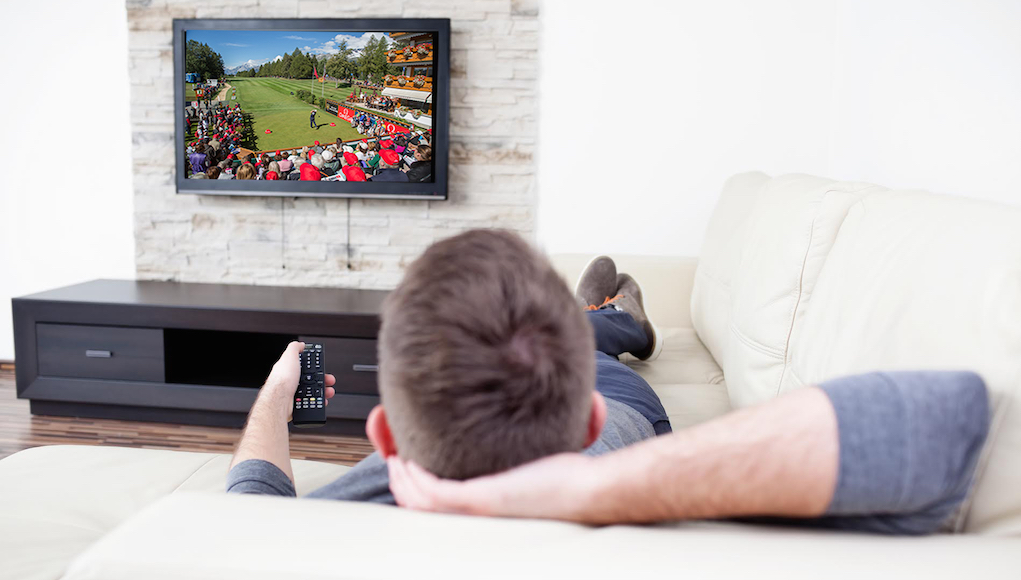 As passionate golfers, we want to watch the best professional golfers play in the biggest tournaments on TV. But don’t you get the feeling sometimes that you’ve wasted the entire weekend on the couch watching golf instead of improving your own game?

Well, that doesn’t have to be the case. In fact, you can actually get better at playing golf by simply watching golf on TV. Here are a few things to look for the next time you turn on the tournament coverage during the weekend:

The importance of a pre-shot routine

Now I know each one of you are saying, “I already have a pre-shot routine.” And you’re getting ready to skip this section, but hold on!

Yes, most of you have a few actions that you tend to repeat before you hit the ball, but let’s dig a little deeper into your pre-shot routine. Let me ask you a few questions:

As you can see, there are multiple routines within your overall routine, and it’s up to you to understand the differences. But I promise one thing, if you watch the professionals on Tour you will see the same exact actions from a particular player over and over, time after time. The only time this will vary is if they are in big trouble and are trying to find the “feel” of the grass or slope, or if they’re figuring out a confusing wind pattern. But 98 percent of the time they approach each shot the same exact way. Do you?

How many times have you watched your buddy play a great front nine, then on No. 11 or 12 hit it down the middle, miss the green with a wedge and make bogey. Then you watch him beat himself up for such a “stupid mistake” and never recover for the rest of the day?

Pay attention to the leaders during a given Saturday or Sunday. At least one time on the back nine they will miss a simple drive, approach shot, etc., but do they let it bother them? Nope. If you remember Jack Nicklaus’ 1986 Masters victory (the last major he ever won), he bogeyed No. 12 from just off the green and then played Nos. 13-18 in 5-under par. Later he said the silly bogey made him focus more. Do you react this way? Did your buddy?

Watch the professionals, as they ALL hit funky shots at inopportune moments, but most of the time they keep their cool enough to recover or at least not let it bother them for the rest of the day. Golf is all about mental and emotional management. So you have a resolve like most of the professionals on Tour?

Where to miss it

Let’s take a very simple green design and see how the professionals would play the hole. Here is the green on hole No. 9 on the Norman Course at Vidanta. 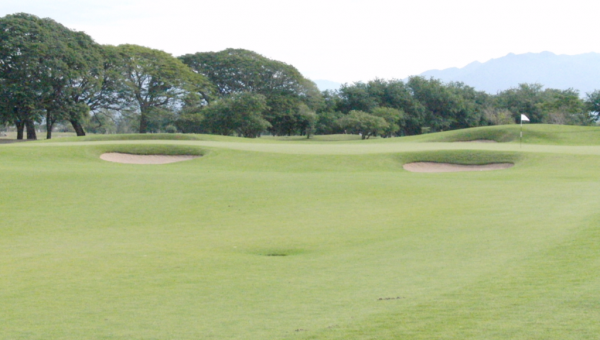 The green is firm, and it’s long and skinny with bunkers short and one long. If a professional had a similar shot with a 6 or 7 iron, where would he tend to try and leave this shot? Where would you?

I can assure you that with a firm green, you would see most professionals who prefer a fade start the ball a touch right of the left bunker and move it back toward the center of the green, thus taking the short and long bunkers out of play. If they prefer a draw, then you’d see a short right miss, if anything, taking the front bunker out of play as well.

How many of you would start the ball just right or left of the pin and work it toward the flag from 150 or so? Most of you, I’d bet. And you’d likely hit it short in the bunker, possibly plugged, or one-hop it in the back bunker; both of are very difficult up and downs. Professionals try to always miss the ball in the “easiest” places so they don’t tax their short games. It’s far easier to get the ball up and down with some green to work with than without.

While watching an event on TV, quiz yourself as to where you would aim on each shot, and where you’d want your ideal miss to end up. Then, note where that particular player ended up missing his shot. The more you play this game with yourself, the better you’ll get at managing the course in your rounds of golf.

This is where you can learn more about how to score from watching TV than you can with your shag bag at the practice area.

The fact is, if you don’t have the shot for a certain situation, or you choose to play the incorrect shot, you have made the shot 10 times harder than it needs to be!

Watch the professionals as they assess how to play a certain short-game shot, and take note of the one they elect to play. The pros you see on TV have several ways to play each shot they encounter, then select from a number of different trajectories, spins, etc. Do you?

You need to develop more weapons in your arsenal around the greens so you’re never stuck hitting a shot that’s not comfortable to you. Take notes of what shots the pros hit around the greens, and try imitating them during your next practice session. Try a new short game shot after each tournament you watch, and your short game prowess will expand like you won’t believe.

There once existed a great golf school years ago called “Three Club Golf Schools,” which helped people learn how to hit their driver, wedge and putter. And the professionals you see on TV have also mastered each of these clubs.

When you’re watching an event on TV, pay close attention to how each player swings:

Remember, you want to be a master at all three, so if you notice a weakness relative to your handicap, you’ve figured out where to spend your time during your next practice session. Don’t forget, you can learn a lot by just watching, and then applying the same approach and confidence of the touring pros into your driving, wedge and putting games.

I hope by now you see that paying attention to HOW professionals play golf and score will give you valuable insight as to how you can lower your handicap. So grab your favorite bag of chips (or broccoli and dip for the fitness-conscious among us), prop your feet up and prepare to watch some golf.

5 steps to building confidence in your putting