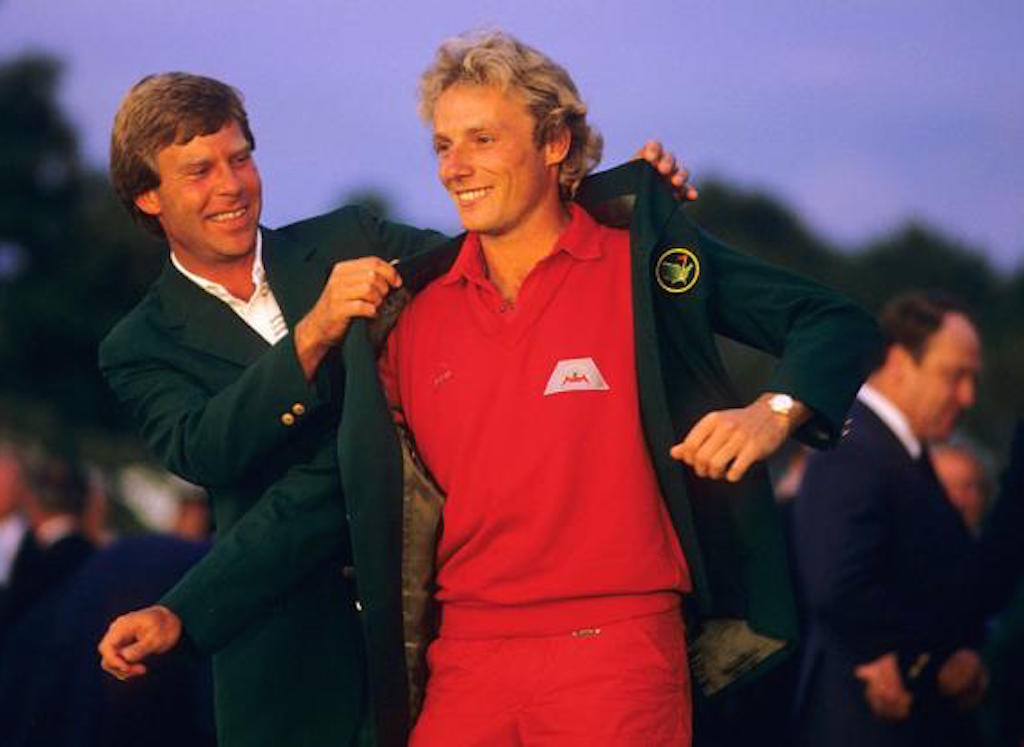 [dropcap]B[/dropcap]ernhard Langer will celebrate the 30th anniversary of winning his first Green Jacket at the Masters this year, and he’ll be in the field competing for another one. He’s not coming to Augusta for the memories or nostalgia. Both are readily available, but he’s playing to win.

Last year at 56 years old, Langer finished in eighth place on a course that is supposed to be far too long for his age. The year before, he finished in the top-25. So what’s his secret? How is he still so good?

To find out, I traveled to Boca Raton, Fla., to spend the day on the course with Langer. I came back with answers to those questions, but they weren’t what I expected.

As he explained, Langer comes from a poor background in West Germany, and started caddying to earn money at the age of 12. When he was 15, he became the assistant pro at a local golf club in Germany, and after a few years of helping members with their swings, he turned professional at 18.

Langer began traveling and playing golf events, but he found that he couldn’t afford the cab fare. With a shag bag of golf balls and a bag of clubs slung over his shoulder, he’d take buses and trains to tournaments. Now, the Hall of Famer takes helicopters and jets to events.

[quote_box_center]”I had no idea I’d have this kind of career,” Langer said. “I just wanted to earn a living for a few years. It’s amazing what’s happened.”[/quote_box_center]

Langer turned pro 39 years and 96 wins ago. While he’s recognized as a two-time Masters champion, most golf fans think his dominance started after he reached the Champions Tours, where he’s won 23 events and counting. But he doesn’t see it that way.

[quote_center]”I had good years in my 20s and 30s,” Langer said. “It’s just because I didn’t play much in America that people don’t know about it.”[/quote_center]

As Langer tells it, the Masters was his last tournament in America every year. He’d sometimes leave Augusta as the leader of the PGA Tour’s money list, he said, but then return to Europe for the rest of the season and play in relative obscurity.

[quote_center]“There was no Golf Channel then, and no American golf writers saw us (Europeans) so we weren’t interesting,” he said.[/quote_center]

In his later years, he’s received far more media coverage. It’s his work ethic that has been credited for his strong play and longevity, but again, Langer has a different take.

[quote_box_center]”People think all I do is practice and it’s simply not true,” he said. “I’ll take four or five days off from golf after a tournament … I eat right, stay healthy and fit, but most of all I take breaks from the game. I spend time with my family and my kids. If I just played golf all the time I’d wear myself out.”[/quote_box_center]

There’s an important lesson here for junior and amateur players — even the young golfers on professional tours. You can love golf and work hard, but keep a balance.

Augusta, a rare beauty… that can cook 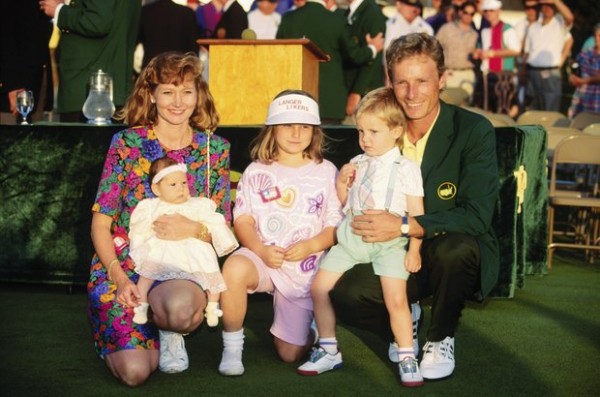 Langer is a family man. You can tell by the way he speaks of his wife and kids that he’s a husband and father before anything else. But you can also tell he has another love — Augusta National.

Langer told me a story about the time he and three friends played Augusta one weekend. They played the course multiple times in two days, but his best memory of that weekend was the eating experience.

[quote_center]”The cooks make any food you want, and they’ll deliver it to the cabins for you,” Langer said. “It’s awesome.”[/quote_center]

Of course, it’s more than the food at Augusta. As a course designer, Langer says Augusta ranks highly on his list of the best courses of the world. But his admiration for the course won’t be as essential to his success in this year’s tournament as his razor sharp iron play, and more importantly, the local knowledge he’s acquired in his 31 Masters appearances.

Langer admits he wasn’t a great driver of the ball in his prime, and Augusta’s wide fairways helped his cause. But those were the days of small-headed persimmon drivers, and in 1993, Langer was the last Masters Champion to win using the old technology.

The introduction of hybrids and the modern driver have greatly improved Langer’s ability to compete. He told me that he thinks he’s a better driver now than he’s even been. He’s also since found a friend in the soon-to-be-outlawed anchored putter.

A few years after he won his second Green Jacket in 1993, Langer began using a long putter, which he anchors to his chest. He said he learned the technique from Sam Torrance and Peter King in 1997. But after nearly 20 years, Langer will have to switch back to a conventional stroke when the anchored putter ban takes effect in 2016.

Come November, when the Champions Tour season is over, Langer will start messing around with short putters to find something he likes. But for now, he’s not worried about it.

While Langer’s been known to fidget around with a lot of different putters and techniques, his swing remains eerily similar to his younger years. That’s part of his secret, he said. He keeps it simple at all times, even when he’s hitting what seem to be complicated shots. 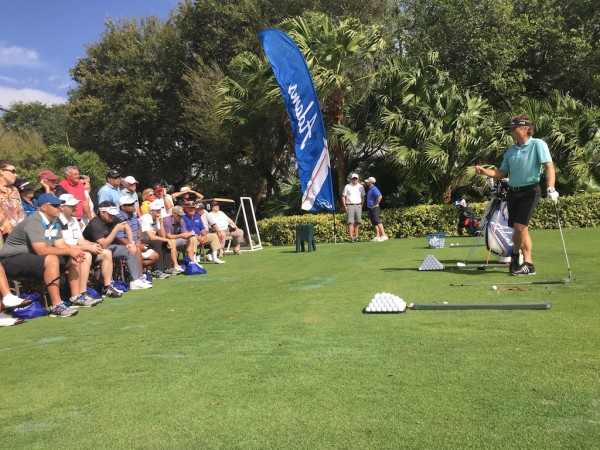 Langer putting on a clinic at the range of Delaire Country Club.

His swing philosophy is much like his mentality on equipment — he doesn’t tinker much, and uses whatever works best. At Delaire Country Club’s range, in front of 50 or so people, he took one swing with the Adams Red — a straight bullet that went about 240 yards without a breath of fade or draw. 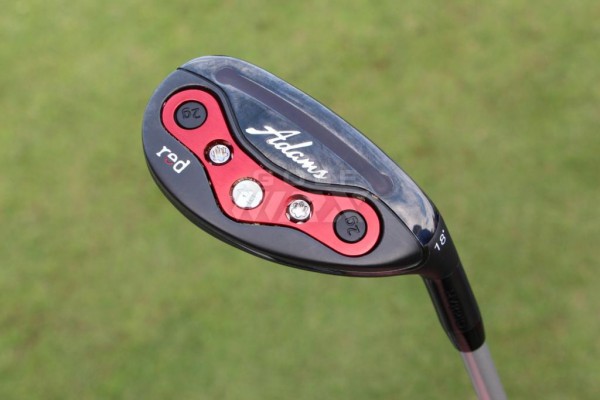 Adams Pro Red has interchangeable weights on the sole to dial in ball flight.

With Adams reps looking on, Langer could have just been fulfilling his duty as company spokesman, but he doesn’t come across that way. He seems to tell it like he hits a golf ball — straight.

It’s a chess game to me

After watching him stripe shot after shot on the range, I asked the question I heard onlookers asking each other.

The approach shot on hole No. 5 at Delaire CC isn’t the easiest. There’s water short and left of the green, and on that day the pin was tucked on the left side. Langer, standing in the middle of the fairway, told me he was aiming at a spot 20 feet to the right of the pin, and anticipated that the 20 mph wind would bring the ball back to the hole.

The wind didn’t take it, but I better understood why Langer hasn’t gotten bored with golf. He might be able to hit perfect shot after perfect shot, but as a tournament golfer and world traveler, he’s always playing different courses in different conditions. The strategy and planning is one of his biggest golf thrills.

A competitor at heart

What keeps a 57-year-old Hall of Famer competing with the same fire he had in his prime?

That’s the real secret to Langer’s longevity in golf — not his healthy lifestyle, his swing, or his family life… although none of that hurts.

When I asked Langer what he’d be doing if he never played golf, he said he’d probably be a soccer coach, or have some other job in sports. He’s just four wins shy of his 100th professional golf win, but if he never picked up a golf club, it was clear that he’d be chasing another competitive milestone.

How long will he continue to play in the Masters?

If that’s the case, we could be waiting a while.

5 questions with a Masters oddsmaker

Why it’s hard to make good clubs for bad golfers