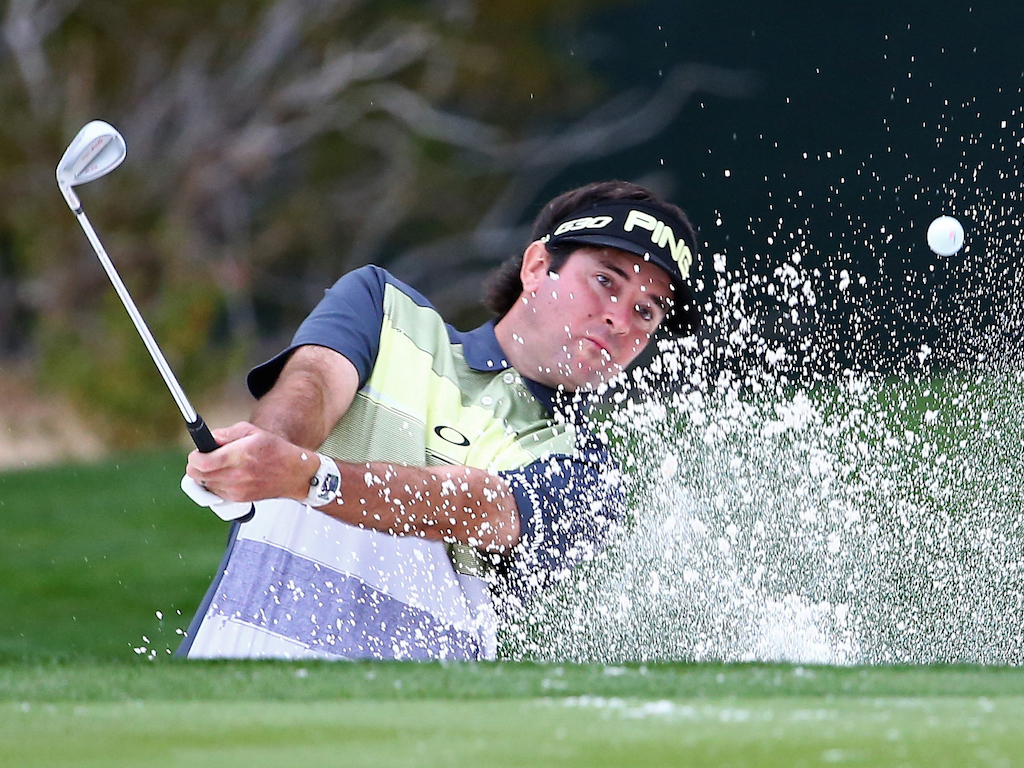 Effective bounce sounds like a good description for what happens when a wedge shot works well, e.g. “he used the bounce effectively with that shot.” The phrase is more often used to describe how a wedge sole interacts with the turf, but it hasn’t often been defined. My aim with this article is to explain effective bounce and how to decide what sole design will work for you.

The purpose of a golf company’s educational material is to try to take fairly complex physics and explain it in a way that is simple and relatable, but still captures the basic meaning. This is a LOT easier said than done.

For wedges, bounce angle has traditionally been held up as the best attribute to explain how the complex geometry of a given wedge sole, delivered by a certain player, interacting with a particular kind of turf, will affect ball flight. Clearly this is a very intricate dynamic that we’re trying to simplify as best as possible to make a useful point.

Generally, a low bounce angle implies a sharper, blade-like impact that cuts through turf easily, whereas a wedge with high bounce angle has a more blunt impact. Our testing shows that when a club either doesn’t get into the turf sufficiently, or it digs in to the turf a lot, it leads to inconsistent shot making. It follows that a player with a swing that causes the wedge to dig too much will benefit from a wedge with more bounce. Conversely, a player who sweeps the club over the turf will get more consistent results with a wedge with less bounce. 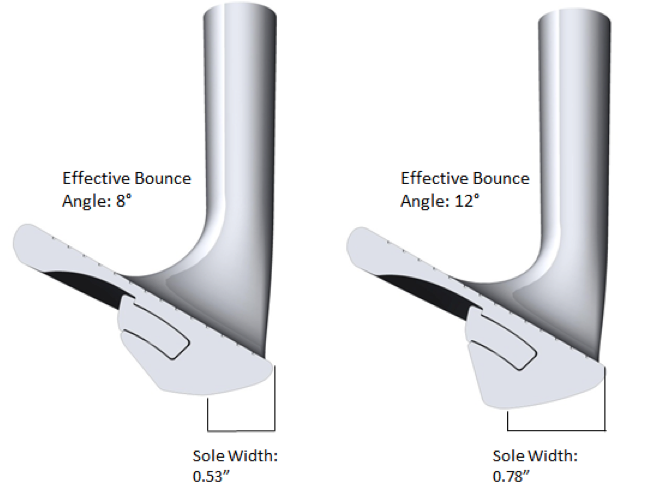 There is, however, a lot more to a wedge sole shape than just the angle of the lead edge. Figure 1 shows two wedge sole designs from the toe view. Their measured bounce angles are identical, but one wedge has a much wider and deeper principal sole section. The back section of the sole, where it starts to rise up after the low point, doesn’t affect the initial ground impact, so it is not really part of the playable width.

The two wedges in Figure 1 will interact with the turf very differently, so just using a bounce angle to define a wedge sole is not sufficient. The wedge on the left, which has a thinner sole, will cut through turf more easily; the one on the right will avoid digging.

So, how do we communicate this? By putting an arbitrary number to it and calling it “effective bounce” or “plays-like bounce”.

Going back to Figure 1, the more visible and measurable attribute to use is the width of the principal sole section. This is easier to see and can be measured and compared from club to club. Sole width is not a perfect description of a wedge’s sole design, but it gives the golfer a better measure to use for comparison. To classify the sole of a wedge, you really need to know both bounce angle and sole width. Our Glide Thin Sole 60-degree wedge actually has 20 degrees of measured bounce angle, but an “effective bounce” of only 6 degrees. The main reason is the thin, 0.5-inch-wide sole. If you are just going to classify a wedge sole with a single number, the measured width is a more intuitive and comparable number than effective bounce angle. Simply put, a thin sole equates well with low effective bounce while a wide sole equates well with high effective bounce.

So, what kind of sole should you play? I often hear people say that better golfers play less bounce and higher-handicap players need more bounce. This isn’t really true. The fitting question comes down to club delivery and turf conditions.

Most players deliver a high-lofted wedge with something between -2 and -12 degrees angle of attack, and a shaft forward lean between about 4 degrees and 14 degrees. This is a very wide range.

Figure 2 (below) shows the same thin-sole wedge being delivered by two different elite-level golfers at Ping. The player on the left delivers the club with hands quite neutral and a shallow attack angle. On the right, the club is delivered with the hands well forward and a steep attack angle.

The sole interacts with the turf very differently. In the first case, the sole hits the ground with a very glancing blow, and despite the downward force at impact (ball goes up, club is forced down) it will not dig too much. In the second case, the lead edge of the sole presents a much sharper target to the turf and will tend to dig much more. For this second golfer, the thin sole presented in the picture will dig too much and a wide sole (with more effective bounce) will present a blunter target to the turf and be much more consistent. 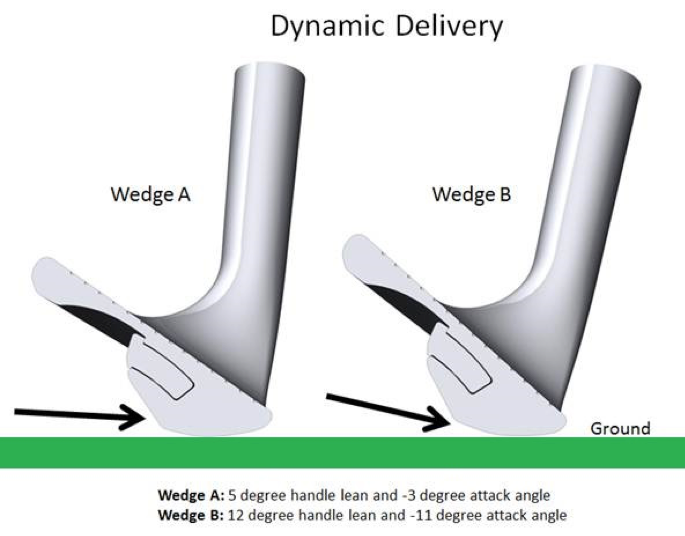 There are many ways to swing a wedge. Even among our tour players there is a sizeable range from shallow to steep. If we made one sole design to cover both ends of the spectrum, it couldn’t be optimized for everyone. Often a top player will change their wedge for the course conditions.

A good example is Angel Cabrera. He has played Glide wedges with each of the thin, standard and wide soles on different weeks depending on the course conditions. It may actually be worth thinking about having a couple of different options in the most lofted wedge to switch out on harder or softer courses.

I always encourage people to get an expert fitting for these important scoring clubs, or at the very least demo a couple of different effective bounce options on real turf where possible.

Gear Trials Feedback: A letter from the editor