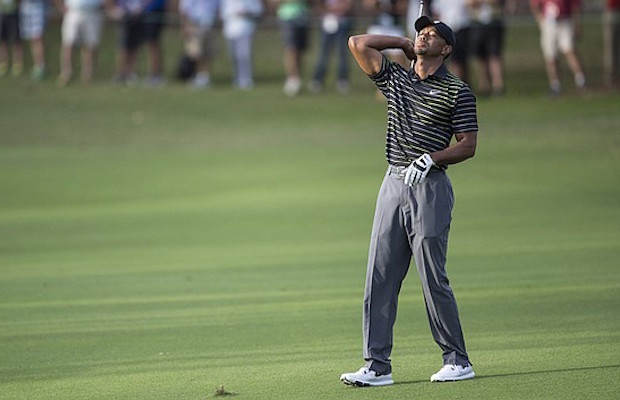 Touring professionals make the game look ridiculously simple at times. They make it look so easy that we often take their technique for granted. We assume that their form is so grooved that all they concern themselves with is feel. But when we see a player of Tiger’s caliber completely flub no less than seven greenside pitches in four rounds — a few of them flying 5 feet or less — it reminds us that technique is a big part of short shots, and that even the world’s best struggle when they lose form. Granted, Tiger was not the only player to struggle with the grainy lies on the greenside slopes around Isleworth Country Club during the event, but he did seem to have a serious case of the chipping yips, a rare occurrence for a player of his caliber.

Greenside pitches and chips are played from a variety of lies and slopes from a wide assortment of different grasses. That’s why the very first thing a player needs to do before they hit a pitch or chip is assess the lie of the golf ball. Golf club selection, setup and stroke are all based on the lie. My students often ask “what shot should I play from 35 yards,” or some other distance. The answer is based completely on what the course will allow — the lie, needed carry, room for the ball to roll out, etc.

Pitching over a hazard or to an elevated green from a tight lie is a completely different shot than one from deep grass. To complicate matters, a shot from the rough into the grain is a drastically different than a shot that is downgrain.

Let’s take a look at some things that might help make us more comfortable around the greens in sticky situations.

A pitch, which is a short, lofted shot played near the green, is all about attack angle and loft. When you’re in the rough and the golf ball is sitting DOWN, the attack angle needs to be sufficiently steep. To play the shot, you want to flex at the knees a bit more than usual, play the ball slightly forward-of-center in your stance and emphasize the weight on the lead foot with a slightly open face. I would be careful of placing the hands too much in front of the ball from deep rough, as it tends to take too much loft off the shot. Hands in front is a steepening technique, but in the rough the ball may not pop out sufficiently, so be careful.

The swing for a pitch should be wristy, elevating the club abruptly and being fairly aggressive through the hitting area. Deceleration is a killer on this shot, because it is played very similar to the blast shot from a greenside bunker. Once you’ve decided to go with this shot, HIT IT! Expect the ball to roll out a bit when it lands.

Conversely, if the ball is sitting UP in the rough consider not grounding the club at address. This will help guard from going under the ball and hitting it high on the face — it will also help avoid incurring a penalty stroke for moving the ball. Depending upon how high the ball is sitting and how far you have to carry the shot, a firm-wristed chipping motion is not a bad method here, but the ball needs to be hit with a very LEVEL attack angle for a clean, center-struck shot. Shots off the top of the face have reverse vertical gear effect, which makes them fly shorter. You can generate a little spin on this shot if it’s hit perfectly.

Pitching from tight lies is a bit different than shots from the rough, but again, attack angle is critical. Depending on the bounce of your wedge, which is the angle of the sole from the leading edge to the trail edge, you might need to employ a different entry into impact. If you have a wedge with a good amount of bounce, say 12 degrees or more, you will need a steep attack angle. A shallow, wide-bottom swing can cause the leading edge of the club to hit the belly of the ball instead of the bottom and the dreaded skull shot is predictable.

To ensure a steep angle of attack, narrow the stance, keep your weight on your lead leg with the ball slightly back in the stance and set your hands ahead of the ball. The setup here is similar to chipping, but you’re using a club with a lot of loft. Where the shot differs from a standard chip is the swing — it’s more UP, so set the wrists a little in the backswing. I also recommend a little turn though the ball with the body into impact. I see too many pitch shots hit fat from tight lies because players try to remain stationary with the body.

With a low-bounce wedge, say 10 degrees or less, it’s best to keep the attack angle more shallow. The leading edge can dig into the turf behind the ball if the attack angle gets too steep. I’d recommend a little wider stance (never too wide with a pitch), your weight fairly evenly distributed and the hands above, not in front, of the golf ball. The swing secret with a low bounce wedge is to use little-to-NO wrists. Push the arms away on the backswing to ensure a wider swing bottom and a more shallow attack angle. Use little-to-no wrists on your takeaway to avoid having the leading edge stubbing the ground behind the golf ball.

This may sound overwhelming, but all I’m really suggesting here is a setup and swing technique to complement the shot at hand. Avoiding skulls or chili-dips can be simply a matter mental preparation. And remember to never fight the slope! The same spine angle you’d set for uphill and downhill shots from the fairway apply around the greens (shoulders parallel to slope, spine perpendicular).

Finally, if you play in Bermuda grass, be careful of the grain. An into-the-grain pitch is a really tough shot. Any slight miscue is magnified greatly. Again, do NOT set the hands too far ahead for fear that the leading edge will dig into the grain, which will cause you to hit the shot fat.  The ball can be back, but leaning too forward or de-lofting too much also runs the risk of hitting it fat. Set up over the ball with the hands above it, not in front, and weight fairly evenly distributed. I’d recommend more of an arm swing than a wristy one.

Remember my tips the next time you set up to a pitch shot that makes you uncomfortable, and remember to always read the slope and lie before you choose on your shot.

If you’d like me to analyze your swing, go to my Facebook page and send me a message, or contact me ([email protected]) about my online swing analysis program.

What is a golf fitness assessment?

How to hit the low spinner