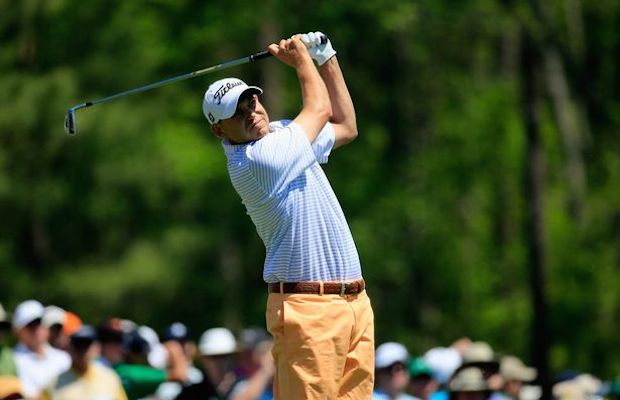 Despite a seemingly benign day at Augusta National, Thursday’s opening round scoring average finished at 74.47, which left Bill Haas as the first round leader of the Masters with a 4-under-par 68.

2013 champion Adam Scott, Jonas Blixt and Miguel Angel Jimenez also reached the 4-under plateau during their rounds, but could not maintain the number to the end. Scott and Jimenez both fell victim to the 155-yard, par-3 12th hole, carding double-bogey fives. The hole played at a 3.42 scoring average for the day, making it the second toughest hole on Thursday. The par-4 11th was first at 4.47.

Haas, 31, opened his fifth career Masters with a bogey, but righted the ship quickly with a birdie on the par-5 2nd hole. The Wake Forest product added birdies on Nos. 4 and 7 to make the turn in 34.

Haas next took advantage of the par-5 13th hole, making his first of two-consecutive birdies and claiming the lead at 4-under with four to play. A bogey on the par-4 17th slid him into a tie for the lead, but Haas finished with a birdie on No. 18 to post a second-nine 34.

It is the first time that Haas will sleep on the lead at a major championship.

Meanwhile, Scott made a valiant attempt to be the first defending champion to lead after the first round since Jose Maria Olazabal in 1995, but settled for a 3-under-par 69 and a three-way tie for second.

A birdie on the par-4 10th earned Scott the solo lead at 4-under-par, but his double two holes later slipped him back to 2-under. He added a birdie on No. 14 and carded pars the rest of the way for this round of 3-under.

Scott is looking to join Jack Nicklaus, Nick Faldo and Tiger Woods as a repeat winner at the Masters.

Webb Simpson birdied his opening three holes to make early noise, quickly fell off pace with a double on the par-4 5th hole, as well as a bogey on the 11th and a double on No. 15.

1988 champion Sandy Lyle also made a brief appearance on the leaderboard by making birdies on Nos. 2, 3 and 4, but he played the rest of his round in 7-over.

Justin Rose also carded a 76, while another surprise was 2013 PGA Championship winner Jason Dufner shooting an opening round 80 after making the turn in even par.