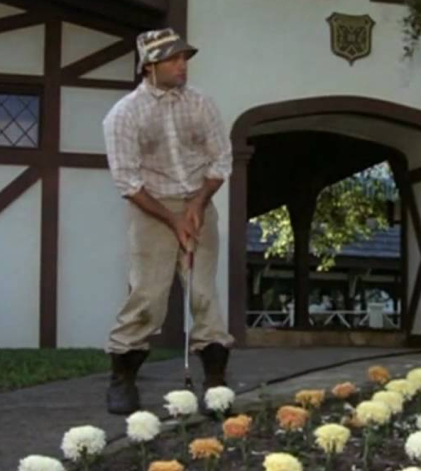 Recently, I was working on some new DVDs for Swing Man Golf. During the process I reflected back on my journey, and noticed how my choice of a favorite golf swing has evolved over the years.

I forget exactly when I started playing golf — maybe junior high or early high school. But I do remember in those first few years that my Dad would take me out with him several times per season for 18 holes and I would mostly shoot between 110 and 120.

During my junior year in high school, breaking 100 on 18 holes was my barometer for having a good round, and those scores were actually good enough to play in the fourth or fifth slots on my high school varsity team.

Also during that period, Dad and I would watch a lot of sports together on TV. Depending on the season, it was mostly baseball, basketball, and football, but we would also take in other sports like golf when they came on, especially for a tournament like the Masters.

For some reason the swings that always stood out to me in those early years were Fred Couples and Greg Norman, the “Great White Shark.” I didn’t really know much about golf or technique at the time, but I could still appreciate how carefree Freddie looked with his buttery rhythm and super smooth swing.

As for Norman, I suppose parts of what made him noticeable to me were both his long blonde hair as well as his nickname, but I also really liked how confidently and aggressively he would go after the ball while still managing to stay in balance. With him, it seemed to be no-holds-barred when it came time for a full swing.

When I got in to college, Ernie Els was coming on the scene, and much for the same reasons I liked Couples’ swing I really loved watching “The Big Easy” swing. Again, with my knowledge back then, I didn’t really understand what was going on from a technical standpoint, but I sure enjoyed how pretty and effortless looking he was to watch.

Then after five years of working as a computer engineer, I quit my corporate job in Kansas City and moved out to California to pursue a golf career. Shortly after I arrived, I had the good fortune of having Dan Shauger take me under his wing and introduce me to his friend Mike Austin. At first mention, I didn’t know who Austin was but for some reason his name did sound familiar.

Later on, I remembered that as a young boy I had flipped through an old edition of the Guinness Book of World Records and that I had read about Austin’s 515-yard drive that he had hit in the 1974 U.S. National Senior Open in Las Vegas. Almost unimaginably, he was 64 years old at the time of the drive and he used a steel-shafted persimmon wood driver and balata ball to do it.

In a way it was magical for me to get to meet this mystical legend that I had read about as a kid. Shortly after, Dan introduced me to Austin and showed me some old VHS tape video footage of Mike’s swing, I had found my new favorite swing in Austin.

I’ve always been a naturally curious person, and in the years since my initial meeting with Dan and the now late Austin, I’ve spent a great deal of time studying many other great swings as a swing scientist of sorts, and I tried all kinds of different methods in and out of competition. Little did I know it, but both my background in anatomy, kinesiology, physics, patient case analysis, etc., from pharmacy school and also my work as a computer engineer would come in great handy.

In recent years, as a by-product of my research, the person whose swing I found to be my favorite evolved again. This time it would belong to PGA Tour player Ryan Palmer. In fact, some of the primary things I liked about Ryan’s swing are actually many of the same things that helped me go from 14-handicapper to professional golfer.

To me, it’s a low maintenance type of swing that doesn’t require great flexibility that you could just get up out of bed, head to the first tee, and put balls in play all day long. Overall, if you’re looking for a full swing to mimic, I think his is a great choice for both amateurs and professionals. Perhaps in a subsequent article, I’ll talk in more detail about why I like Ryan’s swing.

Anyway, all of that reflection about my favorite swings over the years and why I liked them got me wondering what swings other people liked the most.

As I couldn’t recall any significant poll ever being done to determine who has the best golf swing according to popular vote, I thought it would make for an interesting and fun article. So I did some initial research by asking my friends on Facebook and checking in with those on the Swing Man Golf mailing list to come up with a good list to vote on.

As expected, I got back a lot of nominations for guys like Fred Couples, a younger Ernie Els, Steve Elkington, Greg Norman, Luke Donald, etc, but I also was surprised at the diversity of other responses that came back in as well.

Tiger was mentioned too, but different people favored certain swings of his over others (Ex. Pre-Harmon, Harmon, Haney, or Foley)

From the women, Annika Sorenstam, Mickey Wright, and Na Yeon Choi got nominations.

Count Yogi and Moe Norman made the list…and even yours truly got votes.

Carl Spackler, from Caddyshack was also suggested, which I thought was hilarious, but in all seriousness I decided not to include his weed whacking excellent-ness in the final poll below. It did, however, make for a great title picture for this article.

Interestingly, what became really apparent to me from everyone’s feedback is that people have very different definitions of what constitutes the best golf swing. Their favorite swing could be from someone who is smooth and rhythmic, it might look pretty or ugly, it could be powerful, it could have certain swing fundamentals or mechanics, it could be more or less optimal from a mathematical or scientific standpoint, etc.

It doesn’t even necessarily have to belong to a great player because there’s more to achieving a good golf score and winning than just the full swing. You could have a wonderful player with a terrible full swing and at the same time have someone that doesn’t play that much and/or isn’t even on Tour who has a lovely and very desirable golf swing.

All that being said, this article is about doing a poll, so let’s get to it without further ado.

Below are 72 choice for your favorite golf swing, which is absolutely crazy for any normal sort of poll. I thought about hand picking ones that seemed to get the most votes in my initial research to narrow it down to maybe 5 or 10 options, but I didn’t want to limit the selections to those of my own personal bias and/or marginalize someone else’s choice of best swing. And who knows? Maybe the results will also yield some surprises. Plus, we’ll actually be able to determine by popular vote which golfer has the best golf swing and be able to rank them accordingly.

Perhaps there are some other swings that deserve to be on this list, but at the least this is as inclusive of anything that’s ever been done before.

So…what about you? Who do you think has the best swing in golf?

Cast in your vote and feel free to comment below about whom you chose, why you picked him or her, if you think someone else deserves to be on the list, etc.

Hunt: Breaking down the best players on tour by category